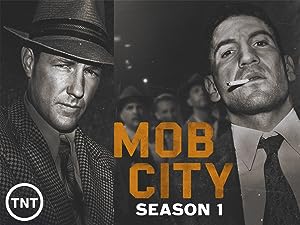 Season 1
(262)
7.52013NR
This powerful drama from acclaimed filmmaker Frank Darabont (The Walking Dead) depicts the epic battle between officer Joe Teague and a dangerous mobster in 1940s Los Angeles. Teague has been assigned to a new mob task force where the goal is to free the city of criminals like Mickey Cohen, the ruthless king of the Los Angeles underworld.

HeadarmorReviewed in the United States on November 12, 2020
5.0 out of 5 stars
Great story and actors, follows historical line
Verified purchase
Well acted, gritty,, and believable season of the struggles circulating beneath the veneer of law and order in a turbulent, post war America. Not for the under 18 crowd, gratuitous sensual scenes could have been condensed to the imaginative level. Disappointed there was only one season. The actors had great chemistry, and obvious talent.
One person found this helpful

Greg YoungReviewed in the United States on December 14, 2013
4.0 out of 5 stars
I'm intrigued
Verified purchase
Yes, this is fiction, an artistic interpretation of organized crime in LA in the 40's. If you don't need historical accuracy in your mob story, this show has great visuals, standout acting (notably Simon Pegg as an American loser comic, though he's just a guest star, and Robert Knepper as killer Sid Rothman) and fantastic music by Mark Isham. But the real star is the dialogue. Sure, the storyline is about as contrived as a Hollywood subway, but the scripts are perfectly hard-boiled and it's a gas just watching the characters dance around each other with candy in one hand and a gun in the other. Jon Bernthal's Joe Teague is the perfect antihero cop straddling the line, a palooka with an agenda, and I'll keep watching just to find out what that is. I just wish the shooting victims didn't all do the slow-motion spazz-out.

edit: So, this was meant to be a review of the show in general, after watching 3 episodes, not just this preview episode.

Rodney F.Reviewed in the United States on December 23, 2021
5.0 out of 5 stars
1940's LA Cops vs Mob.
Verified purchase
Mob City is a great fictional retelling of 1940's LA in the aftermath of WW2. The hero of this story is a returning US vet, dealing with PTSD from fighting in the Pacific as a Marine, deals with being an LA cop, dealing with, and sometimes working for, the mob, trying to win his ex-wife back, all the while trying not to get killed. It's very disappointing that this series was cancelled after only one season. You will love this show! It's an offer you...can't refuse ;)

Michael DobeyReviewed in the United States on January 30, 2014
5.0 out of 5 stars
fantastic tv series.
Verified purchase
It hasn't been renewed , which it should be. This is a classy tv show about a cop , his woman and real life gangsters , mostly. In reality the mob had bugsy siegal killed. and he drove them to it! He really did, they gave him chance after chance and he told them he wasn't going to share his drug dealing profits. He was classy for a mobster for sure. And handsome but he was still a psycho and you get that here in Edward Burns great performance of him. In fact the cast is all great in this tv series.. John b. does a fine job as the love struck cop who will do anything to protect his woman. Simon peg is great as 'hecky nash' too. The way this looks is so awesome too. As if you are looking at the 1940's in vivid color!. It's sets and such are outstanding. This show is addictive , I watched every ep in a row! I didn't know it existed! But if it comes back I will catch it on tnt. IF. I hope so. Check this out , it's so well done that you will want it to keep going , only it's a very short series. Watch in hd , this show really shines in that format.
3 people found this helpful

Richard GuionReviewed in the United States on December 29, 2013
5.0 out of 5 stars
Great mini-series, beautifully shot, written & acted for fans of LA Noire
Verified purchase
If you are a big fan of 1950s crime fiction Los Angeles, this series is for you. Frank Darabont weaves a great fictional yarn surrounding the real Bugsy Siegel and Mickey Cohen. A photographer with blackmail (played by Simon Pegg), a cop scarred by World War 2 (Jon Berenthal), a femme fatale (Alexa Devaros), and the LA police chief William Parker (Neal McDonough). Another standout is Robert Knepper who plays Siegel's right hand man Sid Rothman. Knepper's been very good in every TV series he has been on, but this particular role & director allows him to give a stellar performance. The directing and cinematography are equally outstanding, many of the shots had me doing a quick rewind. I loved this from beginning to end...I just hope TNT renews it for a full season or someone else (Netflix or Amazon) picks it up.
8 people found this helpful

RhymeWriterReviewed in the United States on January 1, 2014
5.0 out of 5 stars
Mob City Is A Real Pulp Fiction Page Turner
Verified purchase
She ain't a pretty broad. She's gorgeous. Mob City ain't the kind of TV show you let your 10 year old stay up and watch. The good guy is a murderer. The bad guy is a murderer. The good guy is a cop. The bad guy is so notorious that he's synonymous with the concept of A REALLY BAD GUY. As bad as everybody seems to be, Mob City is gorgeous. As gorgeous as the period cool jazz background in episode one. As gorgeous as the bar maid that hits on Joe. As Gorgeous as "Legs," who's fine enough to kill for. As gorgeous as the script that's not exactly a cliff hanger, but composed so there is no way that I'm going to miss the next episode. Mob City. I dig it the most. She ain't heavy. She's kind of sleazy. But the show is deep, dark, and God Awesome Gorgeous.
3 people found this helpful

JonReviewed in the United States on May 22, 2017
5.0 out of 5 stars
you'll either love it or hate it
Verified purchase
It's a Noir, you'll either love it or hate it. It starts off fairly slow, but gets better with each episode. I found myself binging the last three episodes because I was so invested and had to know what would happen next. It's a shame it didn't catch on, but I can definitely see where it wouldn't appeal to the masses. If you enjoy film Noir, the time period/subject matter, or movies like L.A. Confidential, you'll probably find something to enjoy here.
One person found this helpful

Laser PointReviewed in the United States on January 11, 2014
5.0 out of 5 stars
TERRIFIC SERIES
Verified purchase
This series has everything-terrific dialog, great acting, great scripts based on actual criminal/political history of Los Angeles circa 1940s-1960. Every actor seems to have been carefully selected for his/her particular role and each of them does a fine job creating the character. I debated about purchasing this series. The period has been "done" before and I was looking for a drama that would capture the personalities of the historical characters not just the violence of the time. If you are looking for an absorbing , enormously well crafted and acted series I highly recommend Mob City. Greatly looking forward to Season 2.
2 people found this helpful
See all reviews
Back to top
Get to Know Us
Make Money with Us
Amazon Payment Products
Let Us Help You
EnglishChoose a language for shopping. United StatesChoose a country/region for shopping.
© 1996-2022, Amazon.com, Inc. or its affiliates