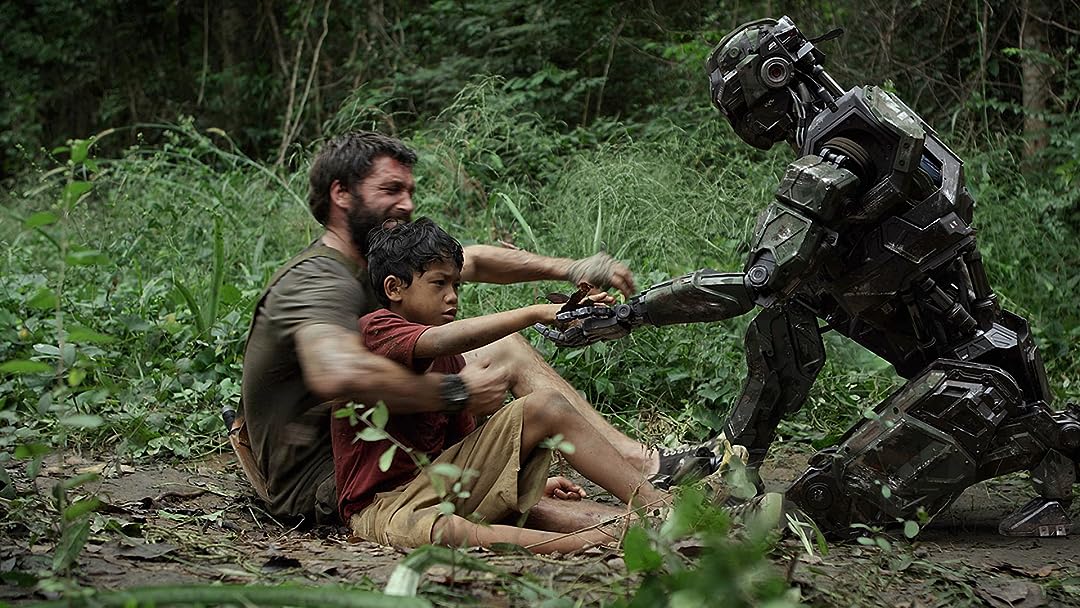 (9,271)5.42 h 11 min2020X-Ray16+
A robotics company teams up with a corrupt CIA agent undergoing an illegal, unsanctioned military operation. Dropping four prototype robots into a suspected drug manufacturing camp in the Golden triangle that no one will miss. Six doctors on a good cause witness the brutal slaughter of an innocent village and are forced into a deadly game of cat and mouse as they become the new targets.

trinityReviewed in the United States on December 24, 2020
1.0 out of 5 stars
This was pure compost material. I want a refund
Verified purchase
Alrighty then, if you remove the robots from this movie your left with complete and total compost material. The human characters are absolutely terrible and somehow manage to act with more cheese than a Chicago style deep dish pizza. Needless and Endless crying, yelling, whaling and an over abundance of comical mistakes that no one running for their life would actually make. Plus, the one annoying idiot that promises to ruin the entire movie single handed who you pray will be the first one killed manages to survive the entire film. That sucked. My entire investment in this film was spent waiting for this cheese ball actor to bite it and I was completely let down. I did not give two rats about the rest of the story. Save your rental fee and move on.
130 people found this helpful

Lynn LivingstonReviewed in the United States on December 28, 2020
1.0 out of 5 stars
Just terrible .....
Verified purchase
This movie is a prime example of how slick people can build a slick preview package that makes a terrible movie appear, well, much better than it actually is. This movie is nothing but loud explosions, and loud screaming by folks being injured, maimed, tortured, killed (you name it) by so many ways, the gore starts to get boring. Oh, and we mustn't forget the screaming by the people in the movie that is filled with rage either. This movie also was very depressing and full of violence, just for the sake of violence. The script is just okay I think by today's standards, and will leave most rolling their eyes at some of the attempts at drama and tension. Some actors are good but some are not so hot. This could be forgiven, but it seems the not so hot ones are pushed beyond their ability to deliver. Or, they are just left alone to muck it up. It's too bad the above will all but obscure some really good CGI with the robots. However, the cheesy plot written for the robots, especially the lead robot character, seems it'd be better suited to 50s sci-fi; it's literally (literally) a rehash of tried and by now tired memes. For me, it definitely did not live up to it's rating, which leads me wondering how it ever got beyond a couple stars. There are some rave reviews, but I don't know what those people watched.
84 people found this helpful

Amazon CustomerReviewed in the United States on December 14, 2020
1.0 out of 5 stars
dont waste your time i did it for you already
Verified purchase
bad script, producer thinks that the louder the girls scream the better the movie I could not stand it and had to stop the movie. It is hard to find good movies these days but this is not something you want to watch.
81 people found this helpful

tygreReviewed in the United States on December 27, 2020
1.0 out of 5 stars
Pink Slime; Run For Your Life
Verified purchase
Save yourself; this is painful to watch. The robots are pretty cool. The actor playing the bearded computer guy does a decent job, as does the little kid. Literally no other actor in this is watchable, they are so horrifically bad. Their facial expressions are more evocative of constipation than of fear, and they spend 90% of their time trying to escape from hunter-killer robots by screaming and yelling and generally making as much group noise as possible ; it almost like they're trying to be killed on purpose. Neal McDonough, a talented actor, phones in a performance here (literally and figuratively) that looks to have been shot in one day in a basement closet at a community college. Like the hipster doctors (?) (no one seems like a doctor, except maybe of mixology) lost in the jungle, he screams and rakes props off his desk like his scenes were directed by a thirteen-year-old kid. He deserved better. Speaking of the directing, the DP is the writer is the director, so let that be your first warning sign. This is Surviving the Game + Rock 'Em Sock 'Em Robots + Predator + Long Stretches of Boredom Punctuated by Unearned Eruptions of Mega-Acting, but it's not as good as any of those things. Avoid.
60 people found this helpful

Anton LennikovReviewed in the United States on December 9, 2020
5.0 out of 5 stars
Terminator reimagined
Verified purchase
It is strange that the movie with a fraction of the Terminator Dark Fate budget is a far more entertaining and visually compelling story on the topic of killer robots. The movie is a solid narrative with characters' actions are fully dictated by their environment and situation with no plot armor or illogical twists. The pace of the story is overall good with a few unnecessary story arcs in the middle of the movie. The movie is also very gritty and violent with characters including women and children die a messy gorry death. This keeps the tension as none of the characters are safe from brutal and violent death. I feel the storyline of the rouge robot was a bit to fantastic and diversion with the overall "down-to-earth really could happen somewhere in the near future" take of the narrative. The CG is good with only one scene in the final of the movie animated characters interaction with the cast felt a bit artificial. The movie can be very entertaining if you ok with brutal on screen violence, suffering, and strong language. While thematically movie attempts to explore more philosophical ideas of war, life, death self-awareness, and the value of human life none of it is the main story point the movie probably would be better in its pure brutal computer game-Esque survival horror feel. Overall a very entertaining movie, but not for a family evening.
56 people found this helpful

Film ViewerReviewed in the United States on January 5, 2021
1.0 out of 5 stars
Subtitles missing most dialogue.
Verified purchase
Those who must rely on subtitles should know that almost all dialog is uncaptioned, and what little there is, is out of sync and often appears to be just guesswork of what might fit with little relevance. Thus impossible to follow or understand, and I would request that Amazon refund rental fees. Of course this presumes you might have had an opportunity to watch the visual picture. That almost no dialogue is captioned is not to say the screen is ever empty of typeout. Like all captioning now, instead of simple dialogue subtitles, a continuous flow of IRRELEVANT, ridiculous sound effects, descriptive opinions of mood, tedious lyrics from nearly continuous overlapping, awful background music, or if no lyrics, kindergarten level attempts to describe every background note. A few examples from this film: screeching instrumental music, droning instrumental music, foreboding instrumental music, exciting instrumental music, sad instrumental music, and more, repeated over and over, between bird calls, unidentified animal sounds, beeping, boom, whooshing, sighs, moaning, clinking, squishing, squelching, trickeling, leaves rustling, loud this, soft that, ad nauseum. Apparently to prevent your gaze from ever actually straying from this useless stream of asinine narrative to watch the actual film. From what little I got, appeared could be half-way engaging science fiction, technically well done, good production values, but with, I'm guessing from occasional lip reading, less than intelligent dialog.
39 people found this helpful

Timur CivanReviewed in the United States on December 22, 2020
5.0 out of 5 stars
This underdog film, wins in the end.
Verified purchase
Consider this. The director is a well known commercial director. He took all his skills and created a film genuinely better than the last 3 Terminator movies with the catering budget of any one of those films.

The photography is excellent, with some genuinely beautiful shots. The core theme of the film is relevant to the modern world. When greed overpowers morals, what are the repercussions? When given a choice between good or evil what path do you take?

The acting is good, some better than others, but the child actor is heart breakingly good.

Just knowing how limited Toia’s resources were, this movie is astounding. The underdog that wins the game, the race or beats the champion at chess.

LechReviewed in the United States on December 28, 2020
1.0 out of 5 stars
omg it's millennials versus the military industrial complex
Verified purchase
Neal McDonough is good actor. the robotics were shot very well (think District 9) the rest was soulless millennial emotional crap in a blender. the lesson we're all monsters, but wait the robot operator believes the AWOL navy seal who is MIA (leaving his brothers behind) believes the BS that human warriors are better than robotic ones? why? the monsters were the self absorbed emotional children with no sense of reality, oh wait, I just described Portland. the other heroes were cambodian? drug farmers. at least they actually had a job and didn't whine about doing it. ugh.
33 people found this helpful
See all reviews
Back to top
Get to Know Us
Make Money with Us
Amazon Payment Products
Let Us Help You
EnglishChoose a language for shopping. United StatesChoose a country/region for shopping.
© 1996-2021, Amazon.com, Inc. or its affiliates