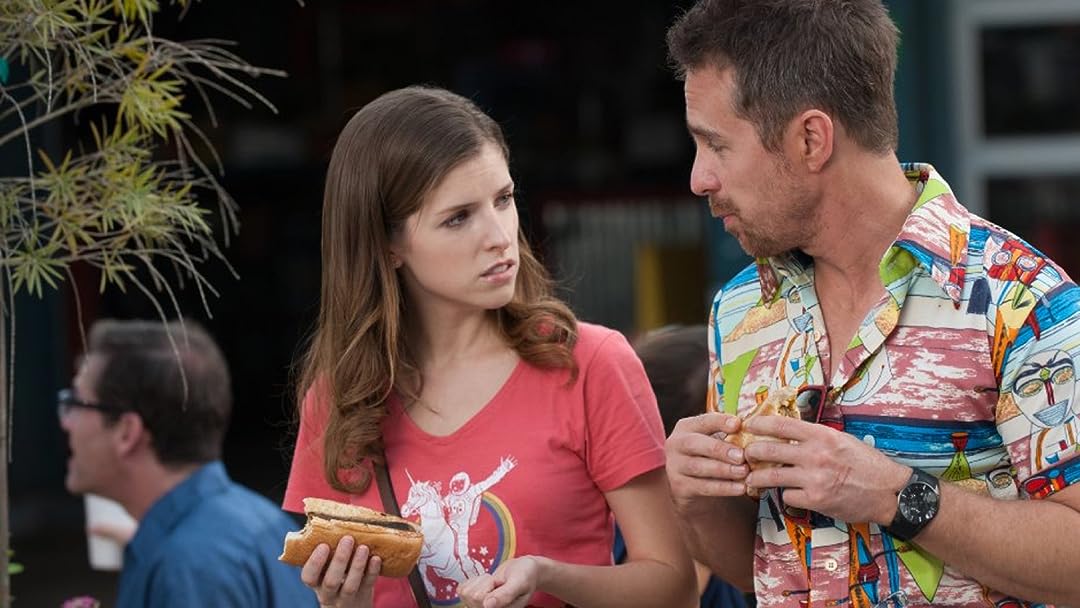 JadeReviewed in the United States on April 22, 2016
5.0 out of 5 stars
Ridiculous and simultaneously adorable
Verified purchase
I love both Anna Kendrick and Sam Rockwell, so the possibility of the both of them being together in one movie really intriqued me. I took a risk and decided to buy instead of renting, and I'm so glad I did.

While the characters have been described as unbelievable, I think that's something that lends credit to the whole movie, and makes it more than your typical Rom-Com tear-jerker or quirky girl meets quirky guy and they have quirky babies. Both characters, are not only quirky, but certifiably more than a little nuts, and yet, it works, while also being a metaphor to how it sometimes feels when you first fall in love, that overwhelming wild giddiness that makes absolutely no sense but is there. The characters are like the living personifications of that feeling, acted out. It's awkward, it's quirky, it's corny, it's crazy, in so many ways it is completely and utterly ridiculous and at the same time it's undeniably cute.

There's an instant connection that doesn't feel forced, between the actors, and the characters, even though the characters are so far left field of sanity, it's organic, and it flows. I never feel like the interaction is forced at all, or coerced, the chemistry between the two of them, despite the mountain of craziness that crops up and how far fetched the characters are, still somehow has this realism to it.

All in all a different kind of rom-com, but an enjoyable one.

The main reason I even decided to spurge and buy this is Sam Rockwell. Over the last few years I've slowly become a huge fan of his comedic acting (and his dancing lol) ever since I stumbled upon The Way Way Back (2013).

He was comedic gold in this film, it was his role and reminded me of his past character in Seven Psychopaths (it seems that I have favorite genre, dark comedies). I knew that he was going to my favorite aspect when the second scene had him dancing across the screen and the fact that he was a 'dancing' assassination/hit man. :)

However, I was pleasantly surprised by Anna Kendrick, she was great in the role of the main character who finds herself falling for a hitman. It was interesting that she was just as quirky and crazy as Rockwell and she played it well.

There was only one thing I disliked, the other characters in the film besides the main couple were kind of blah.

The humor style is not for everyone, most of all if you hate violence, because the main characters are pretty crazy to the point of this being a update dark screwball comedy.

The music was amazing as well, I now have 'My Type' by Saint Motel stuck in my head.

I recommend checking this out if you adore Sam Rockwell as much as me and enjoy dark comedies.
22 people found this helpful

Amanda M.Reviewed in the United States on November 3, 2017
5.0 out of 5 stars
Best Dark Romantic Comedy Ever
Verified purchase
Ok. I have a very dark sense of humor sometimes. I can honestly say this is my favorite Romantic Comedy. The cast is excellent and I love the little moments that get captured. Seriously watch it and watch the expressions on the character's faces. There's one scene where these two guys get threatened by Anna Kendrick. She's so tiny compared to them. They actually look worried and a little scared for a moment. I love to replay it. Lots of fantastic characters that are over the top. They even mock one another about that too. It's really really good.
14 people found this helpful

lovelylaura78Reviewed in the United States on April 17, 2016
5.0 out of 5 stars
Quirky Dark Comedy Romance
Verified purchase
This movie is a dark comedy that is the perfect blend of ridiculousness, romance, and violence. In my opinion, you can't go wrong with anything that Sam Rockwell is in, and Anna Kendrick is perfect for the quirky, sweet, crazy girlfriend. If you like movies like Seven Psychopaths or In Bruges I think you will love this one too.
35 people found this helpful

Matthew MilesReviewed in the United States on January 28, 2019
5.0 out of 5 stars
Unlike anything I ever watched!!! Amazing!!!
Verified purchase
Anna Kendrick character is funny and confident. A type of girl very hard to find today! Her acting in this movie makes me love her even more. What a great performance. Her co-star Sam Rockwell did an amazing job with his unconventional hit man character. I love the chemistry that both actors had together. Their romance was so intense, believable and so cute. They successfully created most perfect and imperfect couple ever.

This movie has a little bit of everything: comedy, action, romance, drama and gore. Is just amazing. I just loved the story and the way they developed the characters. Great directing and very original and crazy plot. Things that would never happen in real life, happened in this movie. So because of that the movie keeps surprising you in a crazy fun way.

A must see several times movie!!!I I just loved it!!!
4 people found this helpful

derek priceReviewed in the United States on March 9, 2019
1.0 out of 5 stars
why..... why make this?
Verified purchase
the writer was clearly drunk, came up with a super cliche idea, and passed out before remembering to write lines for poor anna kendrick.... so the director just said, 'just be cute and say whatever comes to mind'.... suuuuuper glad my wife hated this movie as much as me so she didn't mind banging instead of watching the middle.... p.s...... "I know it's noon and there isn't a cloud in the sky...., but wouldn't it be badass if it was pouring rain during this fight?" said the cinematographer.
9 people found this helpful

Raymond J. TomeckoReviewed in the United States on April 13, 2017
5.0 out of 5 stars
The Movie I Just Watched
Verified purchase
Made no sense whatsoever...Things happened that could never happen.
And I Loved it And Anna Kendrick and Sam Rockwell.
I'll probably watch it again tomorrow. Saw Anna Kendrick in "Mike and Dave Need Wedding Dates," which is why I watched "Mr. Right."
Ms. Kendrick was very, very funny in it. I've seen it three times. I never do that.
I saw her in "Pitch Perfect." Good movie...but, she shines in "Mr. Right" and "Mike and Dave Need Wedding Dates."
No one does Funny, Crazy, Weird and Touching like her.
12 people found this helpful

lisalisaReviewed in the United States on February 13, 2019
4.0 out of 5 stars
implausibility at its finest?
Verified purchase
Okay, I don't understand the appeal of Anna Kendrick. She's mildly cute and I guess she can sing (I have yet to make it through a single Pitch Perfect movie), but she's no leading lady. I can tell she's trying hard to be funny, believable, quirky, etc. In fact you can SEE the effort and it's a bit painful to watch. It's like she's trying to channel Kristin Wiig in Bridesmaids and failing miserably, which got me thinking how much better this film would have been with Kristin Wiig in the lead and that started to distract me. Anna Kendrick rant aside (and she's not horrible, she's just mediocre), I enjoyed the movie. San Rockwell is always a delight and yes, he manages to incorporate those smooth dance moves of his in the role. I'd probably watch Tim Roth do his taxes. Sure, there are a million implausible moments regarding the fight scenes but hey, this is a rom-com at heart, not an action flick. All in all....fun to watch!
See all reviews
Back to top
Get to Know Us
Make Money with Us
Amazon Payment Products
Let Us Help You
EnglishChoose a language for shopping. United StatesChoose a country/region for shopping.
© 1996-2021, Amazon.com, Inc. or its affiliates