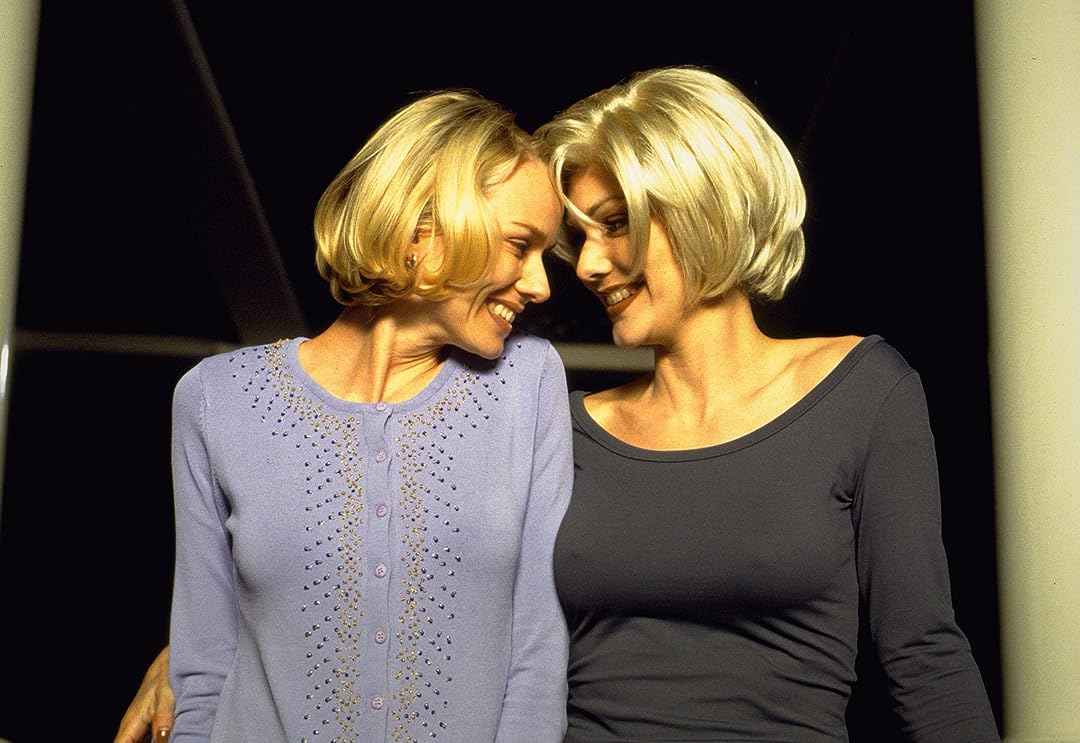 David JordanReviewed in the United States on December 3, 2018
3.0 out of 5 stars
Could have been a great TV show
Verified purchase
This is a hard movie to rate, as it showcases both the best and the worst in Lynch. I've watched it many times, which I wouldn't have done if it weren't quite compelling. But it ultimately has nothing to say, which is a big problem. Lynch excels at staging fascinating scenes that live in their own world, untethered to any narrative, but doesn't seem to think in terms of telling a story. This movie does tell a story, and the story is pretty easy to follow if you pay attention. But huge segments of the movie have nothing at all to do with the story, so you wonder why they're there. But more to the point, there are really two conflicting stories here. The first two hours is one movie, and then the rest is a different story, which destroys everything that had been built up to then. So you're left with a real bad taste in your mouth at the end.

Most of this trouble stems from how the movie was made. The first two hours are the pilot for a TV show that didn't get picked up. Pretty much everything through the theater scene, other than the somewhat gratuitous sex. Being a pilot, its objective was to open up lots of unrelated threads that would then be explored in the eventual series. And if it was anything like Twin Peaks, then Lynch had no idea where any of these threads were going. Then he tried to somehow turn all of those unrelated and unresolved threads into a coherent movie. He did this by coming up with yet another story thread, which does get resolved.

The problem is that this new story has little to do with everything that precedes it, even though it does manage to sort-of tie it to most of the other threads, or at least casually reference them in some way. But he does so with a really cheesy device that's not even very original. (It had been prominently used about twenty years earlier, to almost universal scorn). And really, it doesn't work. The first part just doesn't make sense in the context of the second, even though there are a few details that might be considered ret-con foreshadowing. He would have been better off just giving us the pilot as-is, with no resolution. Or cutting all but the main Betty/Rita story line, which would then have opened up enough time to tell that story.

Having said all that, there's a lot of really good stuff in here. The whole Betty in Hollywood arc is fascinating with its ironic juxtaposition of Betty's over the top naive idealism and the industry corruption. The director at home and with the cowboy was wonderfully surreal. The who-is-Rita Hardy Boys adventures are very engaging. The incompetent hit man is really funny. The Hollywood backstage stuff seemed quite promising. The whole Club Silencio bit was mesmerizing. And there's not-so-good stuff. The dwarf in the isolation room who appears to be controlling Hollywood was just dumb, more of a parody of David Lynch than a serious part of the movie. Similarly the espresso guy.

But really, each time I watch the movie I think how this could have made a great TV series, and it's really too bad that ABC passed on it. And even the Diane/Camilla story could have been interesting if he'd actually made a movie about it. So a big lost opportunity. But still very much worth your time.

Mark SReviewed in the United States on August 9, 2018
5.0 out of 5 stars
The best surrealist film I've ever seen
Verified purchase
Mulholland Dr is an amazing film to watch. It's highly entertaining with some of the best performances and scenes that I ever seen in anything. The Winkie's scene in the beginning might actually be my favorite scene of all time. Naomi Watts also might deliver the performance I've ever seen from an actor. They are certainly up there. It's not the easiest film to understand though. It requires a lot of thought and even researching online in some cases, but it's worth it to know all the ins and outs of this one.
15 people found this helpful

BeniReviewed in the United States on December 4, 2017
5.0 out of 5 stars
Hauntingly beautiful dream.
Verified purchase
Don't watch this movie for a plot. It's not the point and "figuring it out" is anticlimactic.
Just go on a journey through a beautiful dream with some nightmarish turns and you might find yourself wanting to return to this movie many times as I have.
23 people found this helpful

Cammi KilgannonReviewed in the United States on September 1, 2020
5.0 out of 5 stars
Confusing, and that's why I love it
Verified purchase
When I first watched this movie there wasn't a single review or youtube video available that helped me understand what I had just seen. Despite Lynch's work being so well loved, it still gets hacked to something barely comprehensible in the editing room with the help of major studios. Something I can hardly fault them for when they have so much film to work with. I didn't give up though, I watched this movie over and over(thank you, insomnia) and dissected what little information and theories that were available until I completely understood the symbolism behind every scene. Now this is by far one of my favorite movies.
Spoilers:

Most of the movie is a dream, From the two scenes between hitting the pillow and lifting from it everything you've just witnessed is being dreamt by Diane. Betty and Rita never existed. Diane felt that Camilla stole her fame and broke her heart so she hired a hitman to kill her. The guilt leads to the dream sequence that takes up the majority of the film. Her jealousy explains why she sees herself in the dream as Rita, and when she meets the dream version of herself, Betty, she suddenly has more than Rita/Camilla and needs to help her. The disjointed scenes that seem misplaced are to fit with the dream atmosphere. Nothing ever seems quite right in a dream does it?
3 people found this helpful

Kris Allan JohnsonReviewed in the United States on August 5, 2017
5.0 out of 5 stars
This is Lynch's most linear mindbender, almost.
Verified purchase
MULHOLLAND DRIVE (‘01) takes
me on its hook every time that I
watch the film. Lynch had baffled
me before, but this story was so rich
and so lean while capturing the tone
of the Hollywood that I do wished to
have lived in that I kept wanting to
learn and to feel more and as the
ending approached I felt certain
that I was set to get what I desired
. . . right up until the final twenty
minutes began. In twists crueler to
the audience than to the characters
in the story, MULHOLLAND DRIVE
teaches that the illusion is not made
to bend to the will of the audience,
but rather that the audience must
bend to the will of the illusion. And
so I have again and again. That the
ending is bewildering, and nearly (nearly) unsatisfying, is secondary
to what is great about the film. For MULHOLLAND DRIVE David Lynch
was nominated for the Academy
Award for Best Director, even though
the film was not nominated for Best
Picture. That accurately encapsulates
the experience. (((((Recommended)))))
11 people found this helpful

joel wingReviewed in the United States on August 15, 2021
2.0 out of 5 stars
When it's over you feel like you've been taken on a pointless ride by David Lynch
Verified purchase
David Lynch liked to make movies about the darker side of things and Mulholland Drive is no exception. The problem is he went for effect over a proper plot.

Part of the movie is like a dream and the other is like a nightmare mixed in with a hefty dose of surrealism. That’s shown with the two main characters. Laura Harring as the brunette escapes an assassination attempt, while Naomi Watts the blond is brand-new to Los Angeles hoping to make it in the movies. The former has a nightmare experience while the latter is like a dream. For instance, there’s a white glow around Watts when she first enters LA and everyone is smiling and happy around her. That also brings up the surreal elements and the major drawbacks of Mulholland Drive. It appears that Lynch went overboard with being weird at the expense of a coherent story. There’s a guy with a nightmare scene for instance that has nothing to do with the main plot. Then there’s a whole side story about a movie director which turns out to only be tangentially related. When the movie concludes it feels like you’ve been taken on a pointless ride by Lynch.

DeckerReviewed in the United States on November 2, 2021
3.0 out of 5 stars
3/4 of a really good movie
Verified purchase
I saw this when it first came out, and have the same response as then: This is really two movies--a brilliant first 3/4, and a below average 1/4. The two are nearly unrelated, which Lynch seems to throw in our face. So if you're thinking you're just not sharp enough to see what's missing--you're wrong. Its Lynch who's missing something--the skill to bring a story together with a great ending.
If you got suckered into watching all of Twin Peaks (I did, and when it was on TV), you discovered this side of Lynch: he is brilliant at certain scenes, but sometimes terrible at endings that complete the preceding story. He's basically thumbing his nose at the viewers when he doesn't have the ability to tie up the ends.
Two of Lynch's best films, Blue Velvet and Wild At Heart, manage to avoid this, and rise to the top of the genre.
So watch this film for the amazing scenes in the first 3/4. You might as well turn it off after that.

Shirley RozeeReviewed in the United States on February 27, 2018
5.0 out of 5 stars
Mulholland Drive
Verified purchase
This is a wonderful exotically confusing confounding movie supremely acted by Naomi Watts. The very best of all her movies. I cannot begin to describe anything about this movie, except that it is nothing as it appears. I have watched it many, many times and it never ceases to provide great entertainment.
6 people found this helpful
See all reviews
Back to top
Get to Know Us
Make Money with Us
Amazon Payment Products
Let Us Help You
EnglishChoose a language for shopping. United StatesChoose a country/region for shopping.
© 1996-2021, Amazon.com, Inc. or its affiliates