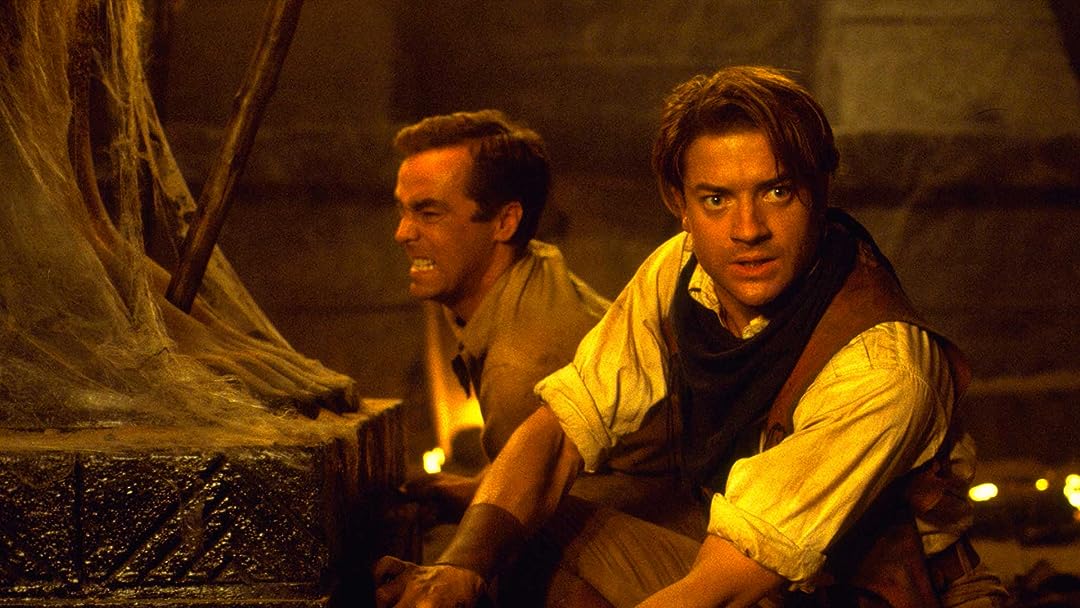 Andrew SchnorrReviewed in the United States on January 5, 2017
5.0 out of 5 stars
The high-water mark for good, fun movies!
Verified purchase
I've always thought there needs to be a new type of awards show, one that specializes not in movies that deal with personal wars or the human condition, but are just good, fun movies. Instead of being the Oscars. They would be "The Mummies." Whenever I watch another movie that's just trying to be an enjoyable romp for a couple of hours, I'll rate it "X Mummies out of 10".

Point is, I see The Mummy as the perfect popcorn flick. It knew exactly what it wanted to be, and it was that to the fullest. And it plays with its own tropes. The characters are practically aware of the cheesy sort of situation their in, and they own their roles. Brendan Fraser, who has just had the most rotten luck in the past decade or so, is at his best here. He plays a character who is simultaneously super-skilled and very vulnerable in a fight, intelligent but able to make the occasional dumb joke. In short, he's the perfect lighthearted action hero.

The story itself is very tightly told, and there's relatively little wasted space. The CGI is clearly dated at this point, but it doesn't stand out quite like the Rock's face does in the sequel. But overall, the best part is that The Mummy is willing to have fun with itself. It's a classic tale of derring-do that we just don't see enough of these days. If you haven't seen this movie yet, see it. And if you have seen it, see it again. It's just a great way to spend a couple hours and come away smiling.

K. NorthropReviewed in the United States on July 16, 2020
5.0 out of 5 stars
20 years on, still so much fun.
Verified purchase
The Mummy has aged really well. This is because it's now credited with being the first contemporary action film--action--and humor. From Wikipedia on the legacy of The Mummy:

To commemorate the twentieth anniversary of the film's release, several media outlets published articles praising the film and its impact.[42][43][44][45][46] Reviewers in Thrillist and Den of Geek called it a "perfect movie."[42][45] The editors of Rotten Tomatoes referred to The Mummy as the "Indiana Jones for a new generation."[46] Junkee declared it the "pivotal blockbuster of the nineties."[47] Commentators from Collider and Syfy Wire praised Brendan Fraser specifically for setting the mold that other action hero characters have followed in the decades since.[44][43] A contributor for Looper noted that The Mummy had "proven to be a truly timeless classic that can be watched over and over again" and that it "helped to change the game for many action movies that would come after" the film's release.[48]

I mean really, would there be a Starlord without Brendan Fraser?

The story centers around an American Rick O’Connell (Brendan Fraser) who was in the French Foreign Legion when he came upon an ancient ruin in the Egyptian desert. He believes there might be treasure there and hooks up with the siblings Evelyn (Rachel Weisz) and Jonathan Carnahan (John Hannah) for help. Evelyn is an Egyptologist who can decipher the secrets of the crypt they find. On the other hand, Rick’s Foreign Legion friend Beni (Kevin O’Connor) works with another group of treasure hunters that are intent upon beating Rick’s group to the gold. Unfortunately they end up releasing a curse instead in the form of an ancient priest Imhotep (Arnold Vosloo) who sets a plague upon Egypt.

The movie has great pacing. There’s plenty of action as shown right from the start when Rick and Beni fight off a group of Arabs in a battle that reveals the ruins or when Rick battles Imhotep and a group of mummies at the end. The wisecracks are good for a laugh as well. The movie keeps the iconography of the mummy genre going, so the light take doesn’t disrespect the history.

The film was so popular it led to a series of sequels all of which are pretty bad. This is the one you really need to see.
C
4 people found this helpful

Saida M.Reviewed in the United States on April 27, 2021
5.0 out of 5 stars
A masterpiece
Verified purchase
One of the favorite childhood movies. This movie NEVER gets old! It got everything... a great story plot, amazing protagonists, and the mummies. I just love the story between Rick and Evy!!
2 people found this helpful

YvonneReviewed in the United States on January 26, 2021
2.0 out of 5 stars
some parts are UHD, some very fuzzy raw VHS type footage
Verified purchase
I really wanted to like this version. Although some scenes are truly magnificent in quality, other scenes are grainy like a vhs movie. Good buy for an avid fan but don't expect perfection.
2 people found this helpful

NYC Gal Out☆Reviewed in the United States on August 27, 2021
5.0 out of 5 stars
Favorite!
Verified purchase
This is one of my favorite fantasy movies! This and the sequel was great (after that, they basically jumped the shark with the franchise). I love movies about the ancient Middle East, especially about Egypt, because it seems anything else is always biblical.