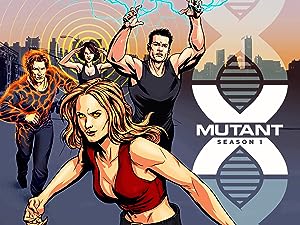 (123)
5.72002TV-PG
MUTANT X chronicles the adventures of a team of human mutants possessing extraordinary powers as a result of genetic engineering. Like hundreds of other unsuspecting subjects, these new mutants were altered in secret experiments conducted in a covert government project.

CreativeRedReviewed in the United States on February 5, 2016
3.0 out of 5 stars
Fun Entertainment, Destructive Packaging a Pain Though
Verified purchase
This series is fun, empty-minded entertainment - I Love It!! However, I wouldn't say that the series is worth paying much more than $25 for a season. I have had to pay more than I'd like in my efforts to find Season 1 in an undamaged, watchable condition.

The disks arrived rattling around inside the case. The packaging for season 1 and season 3 of Mutant X are the same and I’ve never seen
a design like it. There are small plastic arms that hold the bottom of the DVDs in place, they move up and down to snap on the edge of the disk.
Those arms also scratch the disks that rest on top of them, and the disk that it’s designed to hold in place. They don’t work as intended.

The disks were also warped by the notches of plastic that come out of the top edge of the circle, that pinch in and hold the disk in place.
The top title sticker and bottom layer with the DVD information on it, were peeling/bubbling away from the plastic disk.

The packaging for these disks is basically destroying the product. The disks, overall, were not working. Amazon was great about refunding after returning them though.

I have tried ordering them again and I haven’t had a chance to watch it. Again, they were rattling around in the case when they arrived and this new order has a pebble or something stuck on the playing surface of a couple of the disks. The new order is from a different company…it’s just a shame the packaging is so complicated and destructive to the disks themselves. It's not anything a seller can do anything about, it's just annoying as all get out. I don’t know who designed them or why they were chosen instead of the simple snap in by the center hole idea that keeps them in place - which is how Season 2 is packaged. No idea why Season 2 is done in the usual packaging that protects the disk.

Garth R. MailmanReviewed in the United States on March 10, 2014
4.0 out of 5 stars
Guilty Pleasure
Verified purchase
Mutant X was a guilty pleasure when it first came out on late night TV and watching it now on DVD an exercise in nostalgia. It was like so many other shows of the era a Canadian production shot in Vancouver with the seaside cliffs and downtown office towers very much in evidence. This re-issue is as bare-bones as it gets in “full-screen” TV Aspect with no sub-titles and no supplemental materials.

The well-built stars of the show engage in extremely athletic martial arts fisticuffs in a seemingly invincible fashion. Their double helix and other toys are the stuff of science fiction. Their computer skills are still cutting edge a decade and a half later. The show is one part contact sports, one part soap opera, one part high tech. The ensemble cast seem to enjoy working with each other. The show lasted only three seasons.
One person found this helpful

Todd WReviewed in the United States on February 24, 2006
3.0 out of 5 stars
fun; but lack of character development
Verified purchase
Mutant X season one ends where it should have started - with the possibility of a strong nemesis for the Mutant X team. While the season one foe was constant, he only had 3 lines, was it, that he got to repeat for every episodes. The Mutant X characters only began to grow as an ensemble and with personalities in the last few episodes. Perhaps the authors thought action-only would hold the storylines. There was also much greater possibility for moving the storylines a bit deeper. Compare this with another sci-fi type show, say ... Angel, there is action, but there is not the care for the characters that Angel had. I hope that further seasons will reveal better writing and character work.
3 people found this helpful

Bilco41Reviewed in the United States on June 12, 2013
5.0 out of 5 stars
Good Job Victoria !
Verified purchase
I can't compare "Mutant-X, The Series" with the comics, since I never read any of them, however I can relate it to the "X-Men" movies. The Series is, of course, a simpler tale concentrating on character interaction more than special effects and action. Although the Series does have good special effects and action scenes I found the characters more interesting, lacking the perscution-complex and revenge-rage of the movies. Being a fan of Victoria Pratt (Shalimar) I was delighted with her performace as always. Good science fiction, well presented. I think you will enjoy it, and maybe gain some insight into the X-Men.

Carolyn AnneReviewed in the United States on July 7, 2006
5.0 out of 5 stars
Mutant X ROCKS!!! Bring this show back to TV!!!
Verified purchase
Why do the good shows like Mutant X get cancelled and the bad ones are like Energizer batteries??? The bad ones just keep going and going and going. Individual DVDs are how I first became a fan of this show. I bought the DVD with the first 5 episodes of season 2 on it. After I watched those 5 episodes I knew I wanted ALL of season one and ALL the season 2 DVDs that came out after that one. I got them. But I like box sets better. I already have this box set but one of the discs in it has a skip on it I can NOT get rid of. So I ordered another one of this box set. All the discs on it play just fine. I also have the box sets for seasons 2 and 3. I say this box set and the box sets for seasons 2 and 3 are worth the time, effort and money it takes to order them. If you don't believe me, see if a friend or a neighbor or a family member has this box set and would let you borrow it. I think if you watch it, you'll like it and will wanna order one for yourself. If you don't like it...oh well. *shrugs*
2 people found this helpful

Jason BalesReviewed in the United States on September 30, 2004
4.0 out of 5 stars
Finally! All Of Them Together!
Verified purchase
I remember this show was pretty good. I liked X-Men and, though some saw this as a rip off of that franchise, it still was something different. I kind of wished they'd made them natural mutants like in the Marvel universe. But then I suppose they wouldn't have had thier super bad villians Genomex.

I was VERY excited to learn that this show was going to be released on dvd. That was until I found out they were releasing many dvds with a few episodes and a high price to each. That sucked. But now I just learned from tvshowsondvd.com that there was a boxed set coming out. Then I came here to Amazon and found it true! Yay! Only forty bucks for this set? THAT I can handle! As soon as I have some extra cash, this set will be mine!

Not the best sci-fi show out there. But it wasn't the worst either. Sadly this show didn't come back for a fourth year. Maybe some other station will pick it up. Look at the shows Sci-Fi Network has picked up and made into hits. While I'm not a completely dedicated fan to this series (I didn't see every episode and, out of the three seasons I probably saw less than 10% of them) I still would like to see it continue.

My main point is this: If you are a fan of X-Men or Fantastic Four or Avengers or Teen Titans or Justice League (or any other story where there are super powered humans and things of the like) this show is for you.
44 people found this helpful

doodlebugReviewed in the United States on July 31, 2018
5.0 out of 5 stars
Great entertainment
Verified purchase
I loved watching this series. Interesting characters with many flaws and strengths. Storyline is very interesting and does not get monotonous. In fact it’s always a surprise. So disappointed that they only made 3 seasons. I wish they would revive the series.
One person found this helpful

Ash.TinkReviewed in the United States on March 30, 2013
5.0 out of 5 stars
What can you?!
Verified purchase
What can you say about a show that was on right before the whole super-hero craze caught on??? AMAZING, is one this, this was a great show, something me and my dad would sit and watch now with it being on DVD we can again! My almost (15yr old) nephew recently watched this and loved it as well! Can wait until we get the next second season. If you haven't watch this show....DO!
One person found this helpful
See all reviews
Back to top
Get to Know Us
Make Money with Us
Amazon Payment Products
Let Us Help You
EnglishChoose a language for shopping. United StatesChoose a country/region for shopping.
© 1996-2022, Amazon.com, Inc. or its affiliates