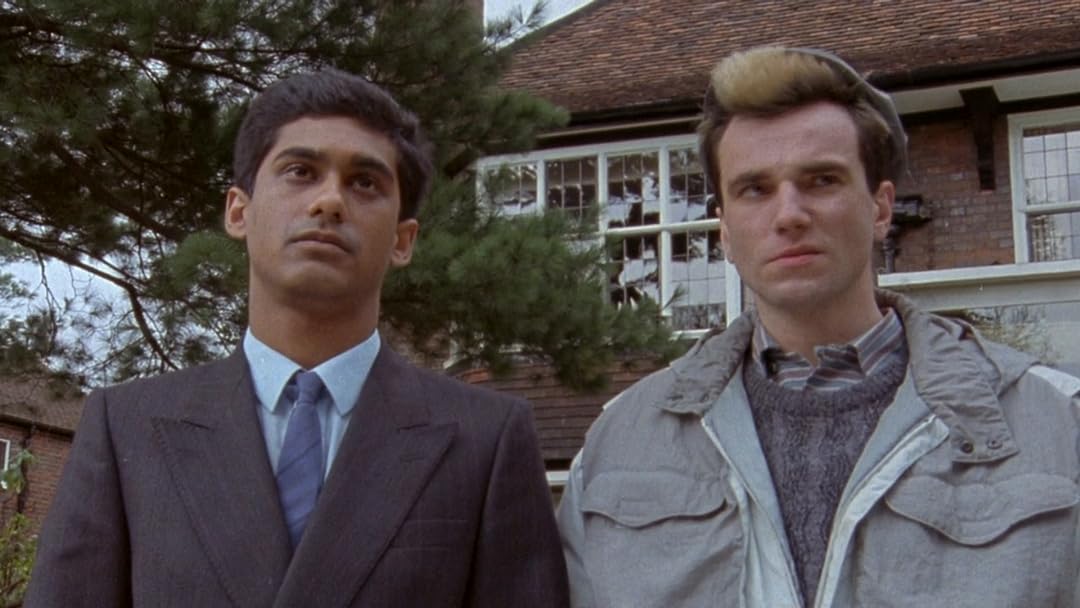 (496)
6.81 h 37 min1986R
An ambitious young man takes over his brother's failing laundrette. With the help of an old friend, they turn it into a video and neon palace rivaling some New York clubs.

Dr. Robert F. KnollReviewed in the United States on May 8, 2021
5.0 out of 5 stars
A British Star Is Born
Verified purchase
A potential viewer gets a good idea of what's in store in Stephen Frears' transgressive interracial gay romance from the choice of the bluray cover image of Daniel Day Lewis licking Gordon Warnecke's ear. Criterion, the Rolls Royce of video reproduction companies, has offered another classic in "My Beautiful Laundrette". It's hard to believe that this social comedy critique of Margaret Thatcher's Britain is 36 years old and that it is so remarkably prescient about the class and racial tensions that affect the post Brexit country today. The royals never appear in "Laundrette" but the spirit of Thatcher's Britain is referred to in the dialogue of one of the main characters, a gleefully amoral Pakistani Briton businessman.
I love this film and its Criterion iteration for a variety of reasons , chief among which is its introduction of Daniel Day Lewis to worldwide cinema audiences. 1985 was his "annus mirabilis" or wonder year. With this film and with "A Room with a View", Day Lewis demonstrated his incredible range: from neo-fascist street punk ("Laundrette") to rigidly uptight aristocrat (View"). Four short years to his first (of a record three) Academy Awards for Best Actor in "My Left Foot" (1989).
"Laundrette" is by no means a one person show. Stephen Frears flawlessly directs a perfectly chosen cast in a deft and stinging script by Pakistani Briton Hanif Kureishi. Both director and writer bring their best stuff to this film. There are rich roles for veteran East Asian actors Saeed Jaffrey as the main character's materialistic uncle and Roshan Seth as the main character's disillusioned and alcoholic father. The younger generation of Pakistani Britons is well represented by Gordon Warnecke as Omar who is pulled in opposite directions by his uncle and father and is offered some sense of emotional/sexual/ business stability by his newly rediscovered childhood chum, Johnny (Mr. Day Lewis). There is a not quite romantic triangle involving Omar's very observant, very determined cousin whom the male elders of the family are trying to maneuver into marriage with Omar. Day Lewis's slyly suggestive smile when describing Omar's lovability to his cousin is an early indication of the complexity he would bring to future roles.
Day Lewis receives third billing after Jaffrey and Seth, but, make no mistake, this is Day Lewis's film. His character has the most developed arc: from drifting and alienated to committed. He expresses his love for Omar, whom he affectionately and playfully calls "Omo", double entendre intact. Johnny is in the process of becoming a worker, the indispensable manager of laundrettes and an interracial gay lover. He defies his class origins and becomes a bit of a pioneer, sexual and otherwise.
In 2021, "My Beautiful Laundrette" remains a relevant and witty film, satisfying in every component from acting to directing to writing.
The Criterion transfer, image and sound, is impeccable.

Glama PussReviewed in the United States on September 1, 2022
3.0 out of 5 stars
Wouldnt have liked it much except for...
Verified purchase
Daniel Day Lewis who just has that extra something and also the actor who plays Omar's father, believe he played Nehru in Gandhi. Racism, immigration, drugs, sexuality all play a part here against a background of one family in one small village. Not predictable but there are some slow and rather boring parts. Recommend.

BillReviewed in the United States on September 8, 2022
3.0 out of 5 stars
Fairly good.
Verified purchase
Had an average feel to it. Seemed a bit disjointed.

joel wingReviewed in the United States on July 8, 2021
4.0 out of 5 stars
Groundbreaking film about family immigrants racism and sexuality in 80s London
Verified purchase
My Beautiful Laundrette is a multi-level story dealing with family, immigrants, racism and sexuality in 1980s London. It centers around Gordon Warnecke who is caught up with his Pakistani immigrant family, anti-Asian sentiment, and his love affair with Daniel Day-Lewis. As he tells Day-Lewis he was beat up in school for being Pakistani, but now he was an aspiring capitalist running a launderette for his family. Warnecke has to deal with all these different issues pulling him in different directions. It’s a wonderful story with two strong performance by Warnecke and Day-Lewis. This was some groundbreaking material when it came out and still stands up to the test of time.

Paul J AmouryReviewed in the United States on January 18, 2022
4.0 out of 5 stars
Strange but fun
Verified purchase
Very well acted and good story but strange story line. I liked it becuase it was very much 70's when the cultures clashed. its odd how the culture of "Moving Up" Pakistanis clash with middle/lower class White so much that they don't seem to care about Omar and Johnny being lovers. I found that part of it hilarious. Still, it is well done, I give it 4 stars because some of the filming is a bit fuzzy, but the rest is very well done.

mmvReviewed in the United States on August 26, 2021
3.0 out of 5 stars
Great topic. Bad execution
Verified purchase
The film's topic, which deals with race, class and sexuality, is great. But, the delivery of the topic is odd. It jumps around with no natural development from one thing to the other- and I don't think this is on purpose (part of some avant-garde intention).

gabriel shapiroReviewed in the United States on May 13, 2021
5.0 out of 5 stars
An all-time classic film!
Verified purchase
One of the all-time cinema great films! This story, written by Hanif Kureishi and directed by Stephen Frears is totally riveting, and I was I in love with this movie from the first time I saw it, and every time I have watched it since then it keeps getting better!

Russell SReviewed in the United States on March 11, 2016
5.0 out of 5 stars
you shouold watch this slice of life movie.
Verified purchase
Let's take a look at the cultural mores of the 1980's in South London as a young Pakistani man and a young London man fall in love. First lets look at the very understated story. wonderfully told and explores the Pakistani population of England and brings us into it. There is also the look at the prejudices that seem to exist everywhere. As we look into this story of the patriarch of the family giving his nephew a run down laundromat to work we see the lives and tribulations of the family and others. The very slow unfolding of the love between theses 2 very different men becomes the focal point of the movie. Does love conquer all? check it out.
11 people found this helpful
See all reviews
Back to top
Get to Know Us
Make Money with Us
Amazon Payment Products
Let Us Help You
EnglishChoose a language for shopping. United StatesChoose a country/region for shopping.
© 1996-2022, Amazon.com, Inc. or its affiliates