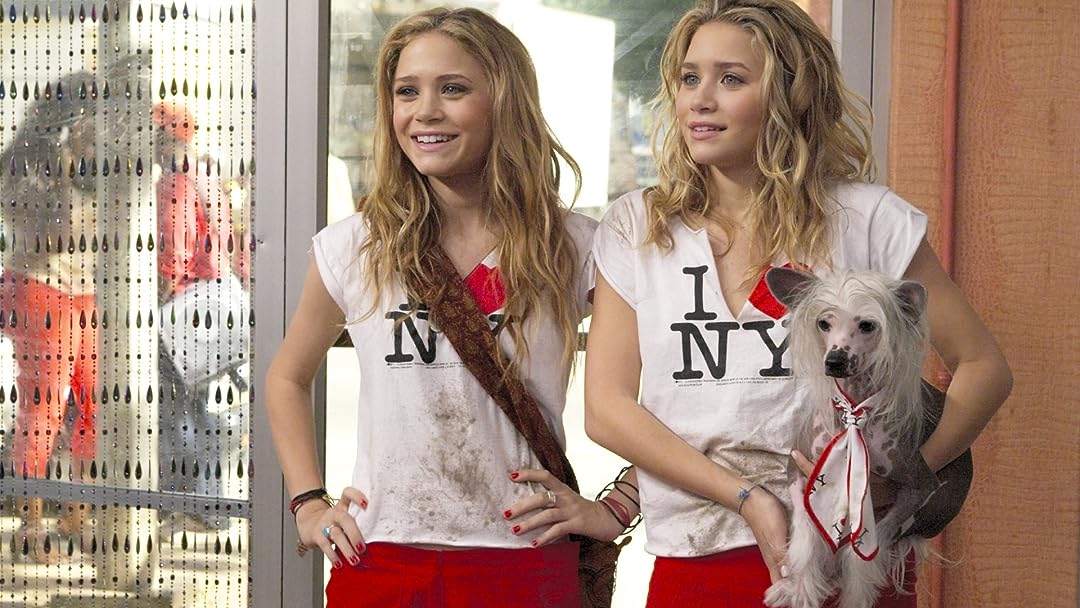 (1,500)
1 h 30 min2004X-RayPG
Mary-Kate and Ashley Olsen take their sister act to the next level where anything can happen - and does - with the delightful comedy New York Minute.

Shannon AReviewed in the United States on September 22, 2020
5.0 out of 5 stars
Awkward acting, Simple Plan, and lots of humor!
Verified purchase
This is not a movie that anyone should take seriously or have high expectations for. It’s about two polar opposite twins who unwillingly get stuck together after many mishaps, learning about each other along the way and what it means to be sisters. The cast is awesome but there are some scenes that might cause some light cringing. Overall, it’s a funny story with some heavy moments and I truly enjoy putting this movie on from time to time when I need to chill and laugh. Did I mention Simple Plan is in it???

Violet WatsonReviewed in the United States on June 21, 2005
5.0 out of 5 stars
New York Minute... A little ridiculous, quite funny.
Verified purchase
Okay, let me start off by saying this review wont tell you the story line or plot. Okay? Anyway.. Most of the Mary-Kate and Ashley movies are not exactly what you would call.. good. They(being MK + Ash) have a reputation and for that reason nobody gives them enough credit now that they're older and have made a movie that actually went to the "big screen". Anyone I have mentioned New York Minute to has looked at me very strange, asked if it was that movie with Mary-Kate and Ashley and then pushed the thought away without considering that it might possibly be an OK movie. Nobody is willing to watch it just because they think it will suck, BECAUSE of the twins. This movie is incredibly entertaining and actually quite good. Surprising, I know. Maybe if people were a little more open-minded this movie and Mary-Kate and Ashley would get the respect they deserve.

If you like silly teen movies like Hot Chick, or Bring It On, etc. Go into this not thinking it will be great and not expecting it to be horrible. It is in between, but it's definitely worth seeing for a laugh, unless you are up-tight then this movie is definitely not for you.

christmas loverReviewed in the United States on July 11, 2015
5.0 out of 5 stars
Mary Kate and Ashleys movie
Verified purchase
This is a good movie and a funny movie. Its better-a lot better-than some people think from reading the reviews but I had already seen it anyway. Although when I ordered this it had been a while but it is better than some people think.Its pretty funny. One of the girls is about to give a speech so it starts with her having the dream which is the nightmare of everyboby who is about to give a speech. The craziness goes on from there until the end of the movie. You should get this.
One person found this helpful

The story is about two sister, Jane Ryan(starring Ashley Olsen and Roxanne Ryan(starring Mary-Kate Olsen). Their relationship used to be really good before hteir mom died two years ago.After their mom died, singal parented Roxy and Jane began to grow different. Roxy doesn??t care much about her school work, she always skips school and is always being chased by Max Loman, the town??s Traunt Officer. She loves music, and has formed a band with her friends, the band??s greatest wish is to produce an album. On another hand, Jane, the more sensitive twin, thinks that she must fulfil her mom??s wish-to look after the family. She became a total control freak and has got the family in good condition. She is the top student in her school, well, she comes top in everything.

Then one day, Jane needs to skip school to give a speech in New York that she hopes will make her wish of getting the scholarship to Qxford University come true. Roxy skips school and heads to New York with a CD of her band that she hopes will make her a rock star. But then, things went wrong and they ended up spending the day in New York together. Talk about the story of their lives?Kat last, they??ve discovered something, something that is more important than getting the scholorship to Oxford University, something that is more important that being famous, and Jane and Roxy have also discovered that anything can happen in a NEW YORK MINUTE.

It??s a really funny comedy, and really adventurous. It??s fun to watch Mary-Kate and Ashley Olsen, who had been sharing the role of Michelle Tanner on the hit American TV show Fullhouse , and runs a brand of their names starring in a theatrical movie again after It Takes Two in 1995. This movie is the last one they produce before they head into college. So don??t hesitate and get New York Minute on DVD/VHS now.
3 people found this helpful

HaleighReviewed in the United States on May 11, 2021
5.0 out of 5 stars
Classic
Verified purchase
The best worst movie

IvanReviewed in the United States on May 10, 2020
5.0 out of 5 stars
Cute movie
Verified purchase
Cute and very entertaining movie. Little fun comedy, drama, and great music. This won't disappoint.
See all reviews
Back to top
Get to Know Us
Make Money with Us
Amazon Payment Products
Let Us Help You
EnglishChoose a language for shopping. United StatesChoose a country/region for shopping.
© 1996-2022, Amazon.com, Inc. or its affiliates