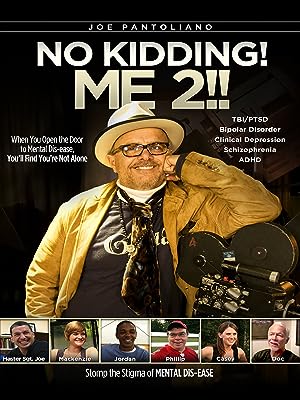 (99)
8.51 h 12 min2009NR
Joe Pantoliano makes his documentary directorial debut as part of his fight against the stigma and shame of mental/brain disease. This empowering film sheds light on what nearly 100 million Americans suffer in isolation.

Studio
No Kidding, Me TOO, Inc.

marioReviewed in the United States on October 25, 2016
3.0 out of 5 stars
Great Content- Editing of Film Too Distracting
Verified purchase
A great film about the stigma of mental illness and the need for society to treat the mentally ill with respect. The content of the film was very good and made some significant points about how society, the medical community and the insurance companies treat the mentally ill compared to those with other medical conditions. The editing of this film was choppy, which was surprising since the film was written and directed by actor Joe Pantoliano, and was distracting to the content. However, anyone working in mental health or the medical community should view this film to get a better understanding of the impact the negative stigma has on those inflicted and how it prevents many from seeking treatment.

MadScientistFarmerReviewed in the United States on January 18, 2014
4.0 out of 5 stars
As a caretaker of an untreated bipolar spouse it helps others understand
Verified purchase
As a caretaker of an untreated bipolar spouse that refuses treatment - it helps others understand. I do wish there was a bit more about modern treatments and medications and the importance of constant therapy. For those of us without the resources of a famous actor, the collateral damage is life threatening. Amazon loves me during the manic episodes because i have to order 4 more phone chargers every other day as they go missing, along with all the books about mental illness - so i end up renting kindle versions or viewing Amazon videos. Computer and camera batteries disappear, as well as SD cards... to say nothing of the relationships and friends and effect on our business. Such a beautiful woman, such a brilliant creative mind, but this disease destroys all her accomplishments every 2 years - i will seek out and share every possible resource. Thank you Joey for revealing your secret of mental disease and helping the world see it with no different a social stigma than a broken leg
2 people found this helpful

RingelevioReviewed in the United States on September 6, 2010
5.0 out of 5 stars
Really Well Done, Heart-Felt Documentary
Verified purchase
The documentary, directed, inspired by, produced by great character actor Joe Pantoliano is a gift to all of us. Everyone has, or knows someone who has been touched by a form of 'mental illness'. The film, and Pantoliano go to great lengths to remove the stigma associated with these kinds of troubles. The message of the film is even more important as thousands of injured veterans from the Irag and Afghanistan wars begin to come home. Many of these vets need our help and compassion. It is critical for the physical and moral strength of our nation that wew help them, and anyone else who has been labeled as 'damaged goods due to mental illness'. Buy the DVD and pass it on! Great job Joey Pants!
11 people found this helpful

Cathy MayridesReviewed in the United States on December 22, 2010
5.0 out of 5 stars
no kidding, me 2! joe pantoliano
Verified purchase
"Joey Pants" has documented some of the trials and tribulations of victims of mental health disorders...and has done it in a way that appeals to the layman...and the sufferer...without judgement and with an upbeat outlook. He himself suffers from bipolar disorder....and there is so much sadness in the fact that he was unable to come "out of the closet" and share his experiences for a long time...like so many others with MH problems. It impacted on his family and his work, and his whole life in general.

There is no shame in having a mental illness and I would recommend this to anyone with an issue or anyone who KNOWS someone who needs help!! It's out there!!

T. WoodReviewed in the United States on March 22, 2011
5.0 out of 5 stars
Truth, whole truth, nothing but...
Verified purchase
This is a great doc. It informs, but does not preach. It reveals, but does not accost. It entertains!
It handles a delicate subject with maturity, poise and honesty and succeeds at bringing an in-depth awareness without being heavy-handed. Praise for Joey Pants for his courage and honesty and commitment.
This is a great documentary to own and share not only for those who are familiar with mental illness but also for everyone - it helps inform the whole insurance/medical debate in a purposeful and progressive way and offers comfort and understanding to those facing the challenges of dis-ease.
5 people found this helpful

NAKMReviewed in the United States on April 11, 2011
5.0 out of 5 stars
Good Vibes!
Verified purchase
Love ya, Joey! and by the way, No kidding, me too!!
"No Kidding! Me 2!" is a very good documentary, that gives us people with a "Mental Illnes" diagnosis a look at others who, through no fault of their own have also found themselves in similar circumstances.
Many of us, like Joe, have come to our diagnosis later in our lives, but have suffered for years without really knowing why...if we can really figure out why.
I am currently getting ready to graduate from my local day rehab program, am finishing up my internship for my certification to become a Peer Support Specialist and hope to take my state boards in August.
I hope that Joe and NKM2 can produce more outstanding material to show that we are all just people with a disease that needs to be addressed as what it is a disease that we certainly didn't ask for and certainly don't want to be stigmatized for.
Dorothy Hamill was a guest speaker here, and she told us that when she was diagnosed with breast cancer, that there wasn't enough that people could/would do for her. But when she was diagnosed with Major Depression, there was like no communication at all.
NKM2 keep up the good work on your end, and I will try to keep up on mine!!
10 people found this helpful

DarthJusticeReviewed in the United States on May 21, 2011
5.0 out of 5 stars
A Frank Discussion And Truth On What It's Like Living With Mental Illness
Verified purchase
No Kidding! Me 2!! is a documentary done by Joe Pantoliano (Ralphie from The Sopranos) on mental illness and the stigma that surrounds it. Joe brings together five other people with mental illness (he himself has clinical depression) to talk about their illnesses and experiences they've had such as dealing with any stigma. Not only that, but the families and friends of the individuals are also involved with discussing their POV of their loved ones mental illness. In addition, several doctors and mental health officials (such as a psychiatry professor) are also talked to and interviewed throughout the documentary. One of the best things is that it's explained at the end in a "Where are they now" kind of thing about how life has gone for the participants. Thankfully, most of it is good news to one degree or another.

One such person, Casey, mentions at point how she went to get stitches after a case of self-harm. The doctor found out it was self-inflicted, stitched her up without anesthesia and without saying another word to her. Another discusses his suicide attempt by jumping from his ninth floor window. It's a very frank and opened discussion on the pain people with mental illness suffer through, all too many times alone for far too many people.

The people involved are very frank and honest about their illnesses and experiences. Which is great because this was one of Joe Pantoliano's goals and reasons for doing the documentary. He wants to get honest talk and the truth out there on what it's like living with mental illness. The only way to fight the stigma that surrounds mental illness from those who are on "the outside looking in".

Sprinkled throughout the movie also are a few statistics on mental illness such as 1 in 4 Americans suffer from at least one disorder.

One thing I wish they would have done would have a little more variety in what the people had. I guess what I'm saying is that I just would have liked seeing more lesser known and/or just as stigmatized mental illnesses represented. Say, Borderline Personality Disorder or Social Anxiety Disorder. You know, just ones that are far less "accepted" (for lack of a better word) and well known. Or maybe, the ones you never really hear much about but can (and often are) just as debilitating.

It's a well done documentary and not just because it's a topic near and dear to my heart. Perhaps you're a person looking to check out some documentaries because you'd like to check out the genre or maybe you're just simply looking for a new one to watch. Or maybe, you fit one of the two above and you want to get a glimpse into what mental illness is REALLY like for those with one or more or their family and friends or perhaps you want to know you aren't alone.

Whatever you're reasons might be, No Kidding, Me 2!! is a good choice to pick up. I would suggest it to anyone who is looking for a good documentary to watch.
6 people found this helpful

pamimboReviewed in the United States on February 25, 2012
4.0 out of 5 stars
An insightful journey
Verified purchase
This documentary was an insightful journey into the minds of individuals living with mental illness. Watching each story reminds you that "brain dis-ease" can affect anyone, at any age, at any time. Joey is helping to bring a face to mental illness and giving people an outlet in which to share their struggles with brain dis-ease. Keep up the good work, Joey. You are helping to eliminate the stigma that people with mental illness experience which is instrumental in helping people come out of the shadows to get the help they need.
One person found this helpful
See all reviews
Back to top
Get to Know Us
Make Money with Us
Amazon Payment Products
Let Us Help You
EnglishChoose a language for shopping. United StatesChoose a country/region for shopping.
© 1996-2022, Amazon.com, Inc. or its affiliates