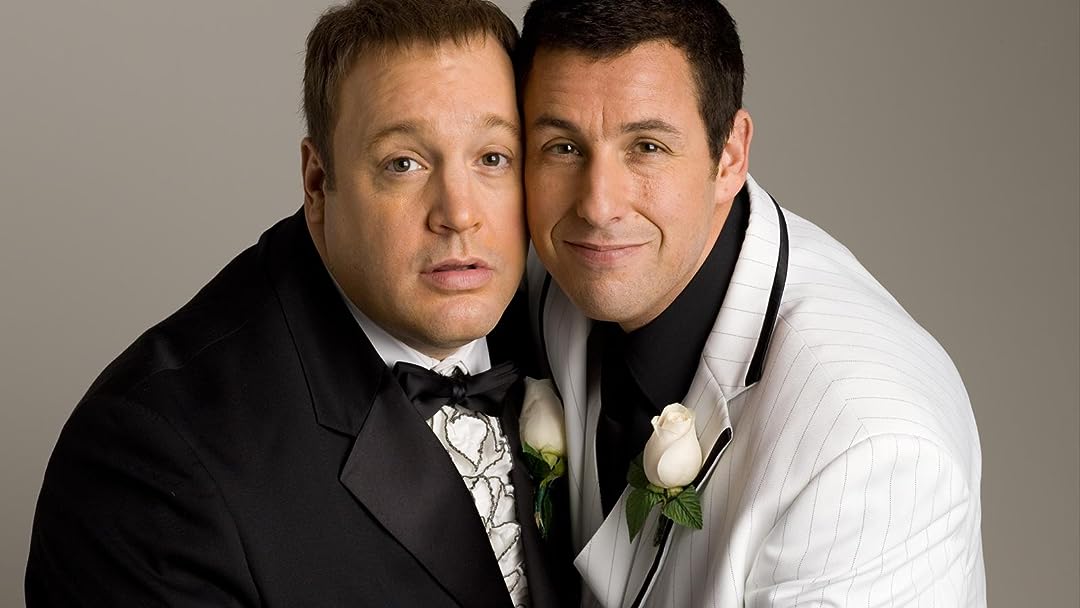 I Now Pronounce You Chuck & Larry

joel wingReviewed in the United States on October 23, 2021
3.0 out of 5 stars
Has laughs and a heart
Verified purchase
This was another family comedy by Adam Sandler. He agrees to be Kevin James’ husband to try to save his pension. It starts off being out of desperation but then they end up defending gay rights.

Like usual there’s a mix of low brow jokes and physical humor. Of course Sandler brings in a bunch of friends as well like Rob Schneider and others. It has laughs and a heart.

GiftbearerReviewed in the United States on December 7, 2021
5.0 out of 5 stars
I laughed really hard!
Verified purchase
At first I thought this would be too cheesy for my taste but Adam Sandler and his pretend gay husband pulled it off really well. The jokes although stereotyped were fitting considering the two characters were supposed to be straight and very macho and actually homophobic. The over-acting was obviously done intentionally, so I don't view it as a flaw.

This really cracked me up! If you are in the mood for comedy, this is a good one to watch!

AdamReviewed in the United States on November 16, 2021
5.0 out of 5 stars
There isn't anything negative I can think of about this movie.
Verified purchase
It allows more understanding and patience for anyone who's not like everyone else, I think the plot was brilliant, the punch lines funny as heck and the acting over the top!
3 people found this helpful

ChrisReviewed in the United States on May 2, 2020
1.0 out of 5 stars
Awful and not even good-bad
Verified purchase
I turned it off after 5 mins SO I can’t fully review the entire movie. That being said here is a review on the first 5 minutes.

Poorly written. Adam Sandler is usually funny to me but there is no way he pulls this role off. Embarrassing for him. Idiotic and far from clever.

MsVichyReviewed in the United States on November 6, 2021
5.0 out of 5 stars
How the Use of Comedy Makes a Cultural and Political and Gender Statement
Verified purchase
IIt took Great comedians/actors to make such a movie. This is for everyone. This is for humanity. This is for teaching. This is for history for centuries to come.
3 people found this helpful

teols2016Reviewed in the United States on March 27, 2014
4.0 out of 5 stars
Judge It For What It Is
Verified purchase
An Adam Sandler comedy with serious moments and tackling serious issues...who saw that coming? I say that this is a film that ought to be judged precisely for what it is. It's not extraordinary and it's not preachy...it's simply a film that sends a message in a way that works for it. Well, message recieved. While this film is a comedy (come on, it's Adam Sandler), it's jokes are funny and do not really stray into the relm of being offensive. And, if it does so, it does so because it's supposed to and it is then handled with the proper respect and attitude. For me, Kevin James is the star of the film, but that could be largely because he stays pretty grounded in comparison to Mr. Sandler's antics, even if those antics remain pretty tame in comparison to some of the man's other works. I wasn't particularly impressed by Jessica Biel's performance, even if there seemed to be some genuine passion behind her character's actions. Overall, I think this film worked because individuals involved in the campaign for gay rights took part in this movie...it just give it this stronger sense of credibility, which is impressive as it's an Adam Sandler comedy. I'd reccomend it to anyone looking for some good laughs and/or an important message. Enjoy.
4 people found this helpful

dazzed0245Reviewed in the United States on August 11, 2020
4.0 out of 5 stars
Different Sandler
Verified purchase
I thought the movie was very funny and the Sandler and James combo is golden. I still like the potty humor of Sandler's early days and miss the simple humor that causes you to get a cramp in your side from laughing so hard, but this more "mature" Sandler can still bring the laughs.
One person found this helpful

Amazon CustomerReviewed in the United States on July 27, 2020
1.0 out of 5 stars
Humor outdated and not funny anymore
Verified purchase
My husband and I remember this movie being funnier years ago.... the crude sexist humor seems a little outdated to the point where we don’t even think it’s funny anymore.
2 people found this helpful
See all reviews
Back to top
Get to Know Us
Make Money with Us
Amazon Payment Products
Let Us Help You
EnglishChoose a language for shopping. United StatesChoose a country/region for shopping.
© 1996-2022, Amazon.com, Inc. or its affiliates