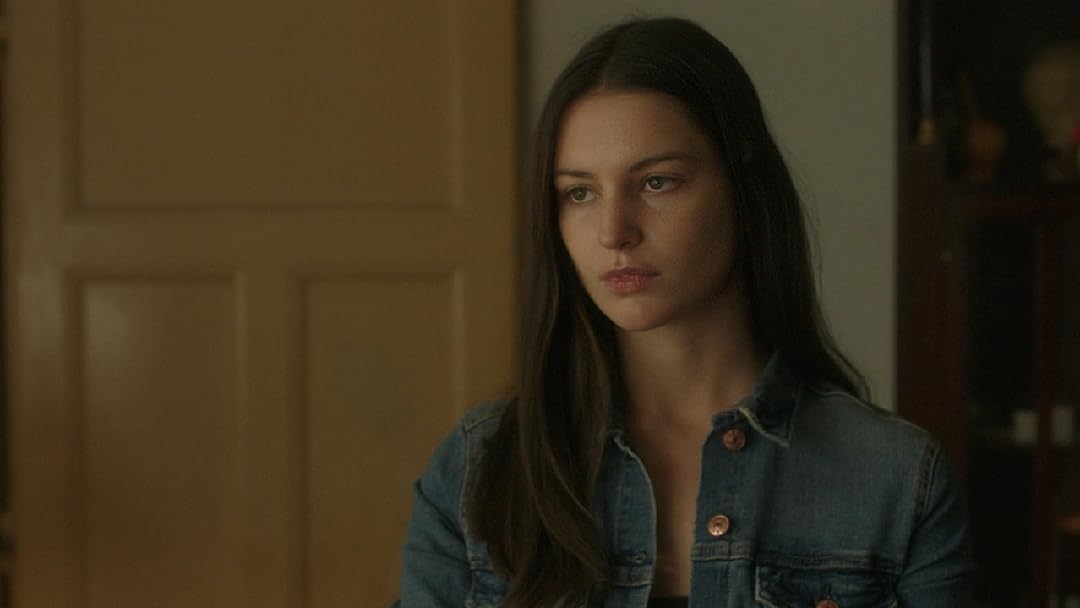 (720)
5.51 h 42 min2018X-RayR
After setting her brutal serial killer boyfriend on fire, a paranoid delusional woman gets a job at an all-night gas station. However, left alone to her own devices, her paranoia and hallucinations return with furious consequences.

EmmieReviewed in the United States on December 23, 2020
1.0 out of 5 stars
Promising beginning, utter crap throughout
Verified purchase
This had the potential to be a good scary movie, but it was ruined by the idiocy of the female protagonist, who, when faced with hand to hand combat with a serial killer, thinks it's smart to hit him a glancing blow with the awesome weapon she found, then drop it and running screaming away - rather than making sure she'd beat his head in and couldn't chase her anymore.
If you like that kind of moronic play-out in movies, you're good, but it makes me want to put the deer head (such a stupid thing to fixate on. Obviously this whole abortion of a movie was written around the desire to use antlers as a weapon) on.
I can't believe I watched all the way to the lame ending. I don't recommend it. Stupid on top of stupid (let's not forget the trucker, who when faced with buckets of blood on the floor, ceiling, and walls, thinks "Hmmm, I need to wander around in here.") after an initially promising 20 minutes. I'll remember to give this guy's movie a wide pass in the future.
I want to be scared, not pissed off.

Avid readerReviewed in the United States on December 31, 2020
3.0 out of 5 stars
Ruined by the last act
Verified purchase
There are two main characters in this movie. Mary and James. James is a serial killer who murdered women in the worst possible ways, and Mary was his girlfriend who witnessed many of the murders. Mary is released on parole, and gets a job on the overnight shift in an out of the way 24 hour gas mart. The mart is a bit of a puzzle, as it seems seedy, but has huge bathroom and locker areas, so it can be a strange set. Mary is on medication, and she thinks she sees James, but is it real or in her imagination? And James is supposed to be in prison. Leading well into the movie is done very well, and keeps up the suspense and when it seems it is James, it turns out to be her imagination. Most of the gore, and there is a lot of it, is in the last act, and in this Mary does things that will leave the viewer dumbstruck. One may wish to cheer for her demise, if only to reduce any future gene pool contribution, and that is sad for how the character was written. The last act really should have been rewritten and it ruins the whole movie. For instance, if the person is truly in danger, then it is best to simply crawl slowly away rather than get up and run?
14 people found this helpful

Scott LesherReviewed in the United States on August 30, 2020
1.0 out of 5 stars
Wate of time
Verified purchase
As happens so often, good premises are mishandled. Here, we have the perfect set up for a suspenseful nail biter. What we get is a complete and total mess. I expect plot holes in films such as this, but the ones here are so egregious, so blatant, that it becomes laughable. There is nothing to recommend in Open 24 Hours except that you rent something else.
15 people found this helpful

Slasher DivaReviewed in the United States on October 27, 2020
5.0 out of 5 stars
What Time Do You Stay Open Til!
Verified purchase
Open 24 Hours Is one of the best horror \Slasher films I've seen all year! Giving the, is it in my mind, or isn't it, film, a fresh take, that's neither, cliche nor predictable!

There's even an homage to one of the 80s most beloved Slasher films! There are some great gore fx,too! They don't try and punk you like other films of this nature do, it's satisfying!

David S. McQueenReviewed in the United States on January 22, 2021
2.0 out of 5 stars
Working the Graveyard Shift
Verified purchase
Set in a remote gas station/convenience store in the U.S. (filmed in Belgrade). present day.

A twenty-something girl gets a job at a convenience store after being released from prison (convicted of arson and attempted murder). Her victim was a serial killer with 35 female victims. She burned the house down trying to kill him after he forced her to watch him murder young women. He was still in prison.

This film is glacial until the last 25 minutes, then picks up the pace. The young woman also has mental illness (paranoia and hallucinations), so she sees thing that aren't real. She tends to lie about things because reality, to her, may be a delusion.

So the movie drags on and the girl screams a lot. It's not implausible but you have to suspend a lot of disbelief. Why doesn't she dial 9-1-1 when she has a chance? Oh, because she's mentally ill. Why not get the shotgun from the cop car? Her mind is too fogged.

You can skip this one (it's formulaic anyway). 2 stars is me being generous.
2 people found this helpful

Tyler J.Reviewed in the United States on January 24, 2021
3.0 out of 5 stars
A great premise, a good female lead, a rough ending.
Verified purchase
I thought the acting of the Mary character was really quite good. The dialogue was decent. Some other reviewers have said it felt low budget which I disagree with. It's a high quality production which has a an unsatisfying ending. There are some bad logic holes here and there which I I would find more tolerable if the film wrapped up better in the end. The victims mother who comes after Mary felt a little too coincidentally timed along with the return of James.

The idea of a horror movie set in a 24 hour gas station run by a young inexperienced girl I think is a really strong premise. I would have liked to see maybe some supernatural element thrown in, like maybe the traumatic visons she was seeing were actually the ghosts of James' past victims coming back to warn her of his return or something, or if they hated her for not saving them they could have lead her into danger etc.

I still enjoyed the ride for the most part and would like to see another go from this director and cast. Let's try something with some paranormal or creature stuff!
One person found this helpful

****Reviewed in the United States on November 26, 2020
5.0 out of 5 stars
I LOVED THIS MOVIE!
Verified purchase
This will be a classic! Edge of your seat action- forever tense. Good acting; believable characters and a story that really could happen. What I especially liked was that the makers of this indie used a limited and common set and made a great movie. As someone who scouts sets for indies, this was clever and really well done. LOVED THIS MOVIE!
5 people found this helpful

Shannon L. MccarthyReviewed in the United States on November 9, 2020
4.0 out of 5 stars
No captioning
Verified purchase
Movie was better than I expected, although my expectations weren’t high to start with, so keep that in mind. I was just disappointed that the dvd did not have a captions option. I like to watch movies while on the treadmill and because my tv has such a low volume, even at 100, I put captions on to catch what I miss from the drone of the treadmill. Also, you know, deaf and hard of hearing folks will have to give this one a pass.
5 people found this helpful
See all reviews
Back to top
Get to Know Us
Make Money with Us
Amazon Payment Products
Let Us Help You
EnglishChoose a language for shopping. United StatesChoose a country/region for shopping.
© 1996-2022, Amazon.com, Inc. or its affiliates