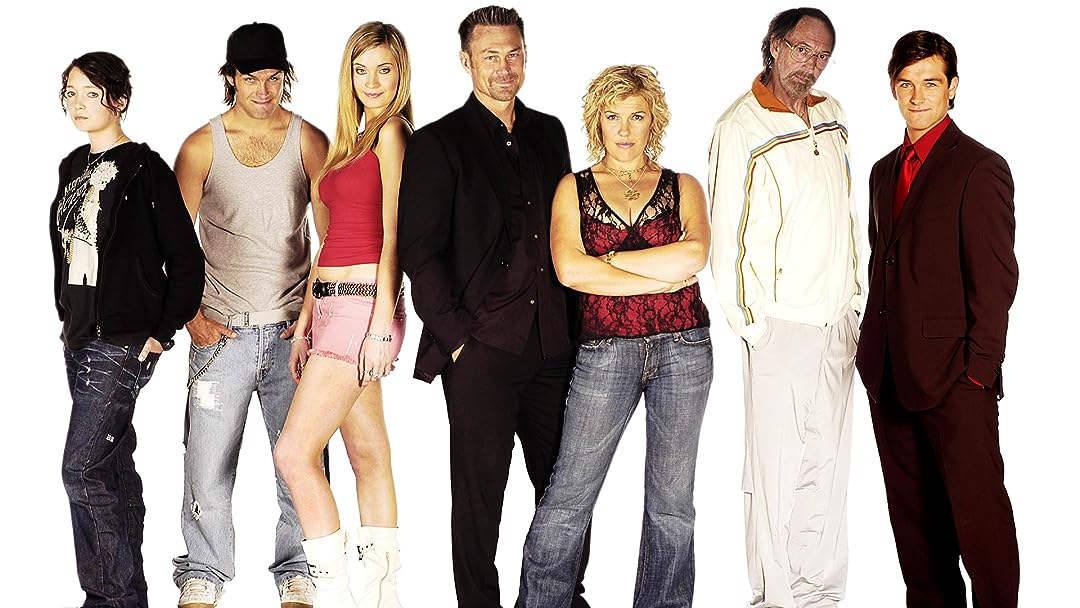 (31)
200516+
This crime-laced comedy-drama follows the Wests, a trashy family of career criminals, as they attempt to clean up their act and live life on the straight and narrow.

P. GagliardiReviewed in the United States on November 2, 2018
5.0 out of 5 stars
5 stars for the show. Boo to Amazon for omitting 2 episodes!!
There should be 13 episodes in the first season. There are only 11 here. As episode 11 began, which, if the title is correct is actually episode 12, it was clear from the recap that something was wrong. If this actually is episode 12 then that means the season finale is missing. Very shoddy. It's a shame, because this is an excellent show. I ordered the complete DVD box set from overseas, so I guess I'll have to wait until it arrives to watch it properly. FYI, not sure if anyone else has noticed, but the episode titles are lines from "Hamlet"; which makes sense since it too is about quite a dysfunctional family.

*UPDATE* I'm happy to say that all episodes in the first season are now available! Thanks for rectifying.
23 people found this helpful

Amazon CustomerReviewed in the United States on December 1, 2018
5.0 out of 5 stars
Kudos to Prime for digging up this gem
I LOVE this series and it made me so mad that in the U.S. they tried to remake it as an American show and butchered it. Just because I am American doesn't mean I only want to watch stories in my own country, and this original cast and writing cannot be beat. Robyn Malcolm is brilliant. Whatever U.S. hollywood exec thought he could do better than her should be fired for incompetence. Seriously, this is some of the best television of all time. I'm so glad Amazon Prime finally brought it to US audiences.
20 people found this helpful

Big MommaReviewed in the United States on November 23, 2018
5.0 out of 5 stars
Excellent binge watching material!
This New Zealand television series is like catnip if I were a binge-watching cat.

Right from the start, I knew I was in for a good time when I saw Robyn Malcolm. She plays the matriarch in this drama/comedy (dramedy?). The acting is very good in this series and the writing matches it. Every casting choice was perfect - from the husband behind bars to the adolescent daughter who dreams big and strives to avoid a formal education. Who are these actors? New Zealand and Australian film and television familiar faces, I suppose.

For any who missed the Australian 'Rake,' (later re-made with Greg Kinnear for American tv) Malcolm played the criminal ring-leader Kirsty Corella. I wanted to shout, 'Hey, Kirsty!' upon finding her in this series - she was a likeable interesting bad girl.

Well worth watching all 6 seasons of 'Outrageous Fortune' now that they are available for prime amazon viewing! And watch 'Rake' if you can.
10 people found this helpful

K. BethReviewed in the United States on December 2, 2018
5.0 out of 5 stars
Favorite series of all time
Thanks! This is awesome. It disappeared from Netflix years ago, and I really missed it. If you've never seen this show, you're in for a treat. New Zealand petty crime family whose hilarious exploits and whacky characters will suck you right in.
11 people found this helpful

michaelReviewed in the United States on January 20, 2019
5.0 out of 5 stars
Great show. From Down Under
Haven't watched on Prime yet but let me tell you I've seen this series a few years ago when a friend turned me on to it it is one of the funniest shows from Australia and the United States I've ever witnessed every episode every character is just great. Great writing and great acting makes for five stars. I just wish there were more seasons. They did try a spinoff with the youngest daughter as lead character which was not quite as good. Because of lack of the characters from original series.
7 people found this helpful

NGReviewed in the United States on June 26, 2020
4.0 out of 5 stars
Acting Excellent...Storyline Good...Moral Values gained NIL
There is one thing I could say about this show after watching all the seasons despite getting icky and hating...I applaud all the actors, they have done an excellent job in involving us in their roles to the extent of hating them for their on-screen personalities...this show brings in an excellent insight into lives of New Zealand Whites (similar to American Rednecks), their complete disregard for laws and rules but an attempt at the Matriarch to lead them to living a law abiding life...Profanity is used like sprinkles on a cupcake, sex overflows more than an A rated movie to the point of disgust, comedy is a show of stupidity, morality value is Null, and racism and deplorable language is splayed all over...But every character fits into their role superbly and that is the best part of this show, to watch them. NOT FOR KIDS
PS...Siobhan Marshall portrayed as Pascalle West in this show is a doppelganger of Ivanka Trump, both in looks and personality

Just MeReviewed in the United States on November 25, 2018
5.0 out of 5 stars
Choice!!
Loved it, Wonderful and quirky cast. Great writing. In the genre, up there with Weeds and Shameless (both versions).
10 people found this helpful

Hayne DrakeReviewed in the United States on March 22, 2019
2.0 out of 5 stars
The last 15 seconds
I've watched the entire first season, waiting for it to get clever. I can confirm that the only time (every time) these episodes get clever is in the last 15 (or so) seconds of each episode. Why couldn't the writers write the entire series as cleverly as they use the last few seconds to hook you into the next episode? An awful waste of talent and time. If Amazon grabbed those writers to do a good series, they would have a winner provided they insist the cleverness spread across each episode. I wish I could recommend it, but I can't. Sorry.
3 people found this helpful
See all reviews
Back to top
Get to Know Us
Make Money with Us
Amazon Payment Products
Let Us Help You
EnglishChoose a language for shopping. United StatesChoose a country/region for shopping.
© 1996-2022, Amazon.com, Inc. or its affiliates