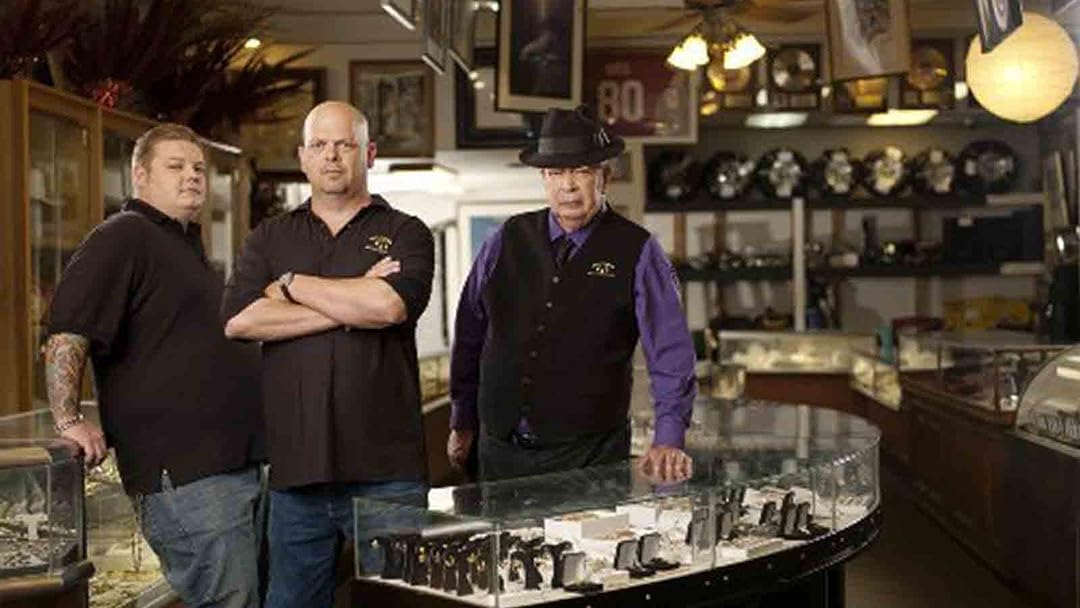 (479)
7.22009X-RayTV-PG
The history of money-lending dates back thousands of years. Long before the History hit series Pawn Stars, pawnbrokers helped people make ends meet by providing loans in exchange for personal items of value. There is no better example of today's pawnbrokers than the Harrison family's Gold and Silver Pawn shop on the outskirts of Las Vegas – the modern day Mecca for people in need of quick cash.

cekcacherReviewed in the United States on April 22, 2019
5.0 out of 5 stars
Pawn Stars od DVD
Verified purchase
I liked the Pawn Stars on the TV and now I'm enjoying them on DVD's. I esp. liked the items they received that told the History of our Country! . . . . .and it was great to see Chum fire rifles, cannons and bows!
One person found this helpful

gootchReviewed in the United States on December 26, 2013
5.0 out of 5 stars
2 Discs From the Beginning. 2009 PART 1!
Verified purchase
This is the Start of the Pawnie Empire! Boom or Bust (with the Old Man needing glasses), ending with Old Man's Gamble & Bonuses too. We wished there would have been COMPLETE Season 1,2,3,4 etc. but the packaging, like American Pickers/American Restoration & Counting Cars is 1 in the same. And as I say: if you enjoy the shows, you will LOVE these Episodes! But in the future, we can only hope A&E/History would do FULL Seasons UNCUT/UNEDITED & more Behind the scenes/Bonus segments. LUV U Guys!!!

swiss missReviewed in the United States on August 30, 2010
5.0 out of 5 stars
Our Family Loves Pawn Stars
Verified purchase
This is a great show because it is one of very few shows that our WHOLE family loves to watch and we always watch together. My kids are 11 and 13.
Pawn Shop is funny to watch because the family who run the shop are so amusing. Best though is (for us as parents) one learns a lot while watching. All kinds of things come into the pawn shop everyday. These guys know a lot about history and so we, the viewers, learn about antique coins, WW1 uniforms, ancient weapons....just to name a fraction of all the stuff that comes into the pawn shop. If no one knows about an item a prospective seller brings in, the pawn shop guys will call in experts and we all learn something together in a really fun way. LOVE THIS SHOW.
10 people found this helpful

LJLReviewed in the United States on July 17, 2010
5.0 out of 5 stars
Great entertainment and quite funny
Verified purchase
I got hooked on this show as soon as I first saw it on the History Channel. Unfortunately I missed many of the earlier episodes, mostly because of the late starting time. This is the best way to catch up and avoid the commercials at the same time. This show is so much better than the antiques roadshow. With this you get to see items being appraised and purchased that the average person might have tucked away in a closet as opposed to old chairs, furniture and fine art on Roadshow. The pace of the show is fast and the dialog is entertaining, thanks to the very good chemistry of Rick the owner, the old man, rick's son and his friend Chumley. They are a likable group. I prefer watching these guys any day over those two obnoxious characters on the other History Channel show, American Pickers. If you're really interested in the collectibles market this is well worth purchasing.
3 people found this helpful

CrystalReviewed in the United States on February 14, 2013
4.0 out of 5 stars
Great show!
Verified purchase
We started watching this show when we stayed overnight in a hotel and me and my fiancee were instantly hooked. Seeing all the different items that come into the store and hearing about their history and what they're worth is fascinating. Also, one of the best things about the show is the family dynamic of the characters. They make the show worth watching and they are hilarious at times. I bought Season 1 and 2 of the show after seeing it on TV and after watching Season 1 it didn't dissapoint. I only wish there were more episodes on Season 1. It only has 16 episodes, I'm guessing because that was their debut season, but Season 2 has double that. All in all I am very satisfied with my purchase.

ChrisReviewed in the United States on March 26, 2013
4.0 out of 5 stars
I love this show
Verified purchase
Pawn Stars is one of those shows that I happened to run across one day when there was nothing else on television.
Now, I have them all marked to tape on my DVR so that I don't miss a new episode or a rerun that I've not seen yet.
The cast is awesome and some of these items that come in there are really really cool.

I only gave it 4 stars because it's the first season. As the seasons go on you really get a good idea of how they do business, the family becomes closer as well as a bigger pain in Rick's butt, you know, like real family.

Rick is defiantly the star of the show, and the Old Man has years of experience and he's cranky to boot. Kind of like a surly Yoda.
Big Hoss (Cory) in this season kind of feels like the new kid on the block trying his best to keep up with the veterans of his dad and grandpa, but it's got to be Chumlee who steals the show. That boy is 10 different kinds of stupid. And just when you think he doesn't know the head from a hole in the ground, he'll bust out some arcane piece of information that will have the entire store stumped on how he knew that.

This show is great fun, some stuff the customers bring in is real, some is fake, but as the opening of the show states "you never know what's gonna come in through those doors".

A. PierreReviewed in the United States on June 23, 2011
4.0 out of 5 stars
Pawn Stars Season 1
Verified purchase
Recently I got addicted to watching the show. However, the show is basically the same for every show. The only difference is the items people bring in. The dialogue is pretty much the same when the items are presented, even the bargaining dialogue is pretty much the say. The old man is pretty funny, Corey is decent, and Rick is very repetitive. My only problem with the show is how they treat Chumlee. He is a simple guy who is pretty funny and nice but the three main guys treat him like crap. He is a big part of the show and they do even bother putting him in the opening credits. I feel bad for the guy.

Overall, the show is enjoyable but very repetitive. It's one of the best shows on television right now. I just wish they'd treat Chumlee with a little more respect since he basically the whole show.
2 people found this helpful
See all reviews
Back to top
Get to Know Us
Make Money with Us
Amazon Payment Products
Let Us Help You
EnglishChoose a language for shopping. United StatesChoose a country/region for shopping.
© 1996-2022, Amazon.com, Inc. or its affiliates