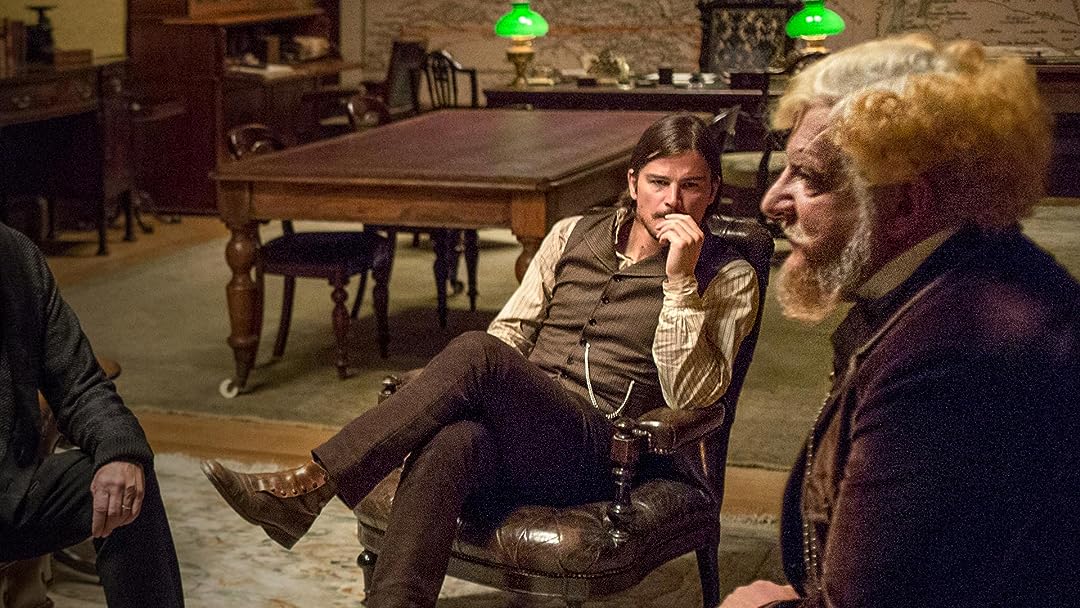 (1,548)
8.22016X-RayTV-MA
Ethan Chandler, Dr. Frankenstein, Dorian Gray, Sir Malcolm, the Creature, and Lily must each face their own monstrous selves. But for Vanessa Ives, accepting her demons could exact a terrible cost and plunge the world into darkness.

MercuryReviewed in the United States on October 15, 2020
4.0 out of 5 stars
Classic monster mash in old London, recommended.
Verified purchase
Penny Dreadful features a group of strange creatures with occult powers drawn from pulp fiction and old dime novels lurking around in the fog of Victorian London. Many of the main characters are archetypes taken directly from Bram Stoker, or Frankenstein (Mary Shelley). Reeve Carney is convincing as Dorian Gray that shows this immortal scoundrel and playboy that wants to sleep with everyone, but you sense that he’s truly haunted by something... Dorian can seemingly live forever as long as his magical portrait is intact Dorian does not age nor can any injury affect him, instead all afflictions are passed onto the portrait, which ages but not the real Dorian, deceiving all who come near him for his own amusement and destruction.

Dr. Frankenstein is played by Harry Treadaway with such a strange sociopathic innocence you can’t help but feel sorry for his character and his caravan of monsters a murderous female psychopath who can seduce and murder at will. The other creature he has created from the dead is a male stereotype based on the classic Frankenstein but is quiet, educated and thoughtful. A former James Bond plays an interesting character Sir Malcolm Murray (Timothy Dalton). The show’s true lead is Vanessa Ives (Eva Green) a clairvoyant woman who appears to be the victim of witchcraft and is an expert tarot card reader.... She is being stalked by vampires and is trying to destroy the curse of being possessed by the devil himself. All in all not a bad cast of characters to include an American werewolf who tries to conquer the old west and get even with his family. The third season is trying to bring a conclusion to the other seasons of Penny Dreadful. Even with many slow moments, the series is fun, suspenseful and entertaining, recommended.

Pat DavisReviewed in the United States on June 5, 2016
5.0 out of 5 stars
AWESOME and Grusome
Verified purchase
It's absolutely AWESOME!!! I'd give it 10 stars if I could. Eva Green is the most accomplished actor I have ever seen!! In point of fact, ALL the actors bring their characters incredibly alive with their skills. The story line is absolutely entrancing, and so well written I have yet to find even a minor hitch. Logan's imagination seems limitless -- although he must have nightmares -- there is no denying the utter darkness in the story, and this season, it's only gone from midnight to the bottomless pits of hell. Logan has given innovative and expansive dimension to the characters of our deepest fears. The time period is perfectly portrayed enhancing the "reality". I've been very pleased to have several of the titillating questions of the past season explained, while new ones abound to tantalize and keep my interest. I must admit, it's not a show for the faint hearted or squeamish. It can be very raw and disturbing. Nonetheless, I eagerly look forward to each episode -- it is without a doubt -- my favorite TV show.
5 people found this helpful

Karen L. MackReviewed in the United States on April 27, 2016
5.0 out of 5 stars
Season 3 Penny Dreadful could be the Best Yet!
Verified purchase
Was SO excited to see that Episode 1 of Season 3 is available. This is my favorite show and I love the direction that they are taking the various plotlines in as well as the new characters added to the ensemble. Can't wait for the rest! Happy that I can view on Amazon without having to subscribe to Showtime. Season 3 could possibly be the best yet!! If you are watching Penny Dreadful for the first time with this episode, and you like it, do yourself a favor and go back and watch the first two seasons.
28 people found this helpful

Steve San FilippoReviewed in the United States on October 16, 2016
5.0 out of 5 stars
Best of the Best
Verified purchase
First, an appreciation of the classic horror genre is a requirement otherwise the wonderfully done but at times extremely graphic nature of some of the scenes will distract from the fine acting and staging. That said, this is an extremely well written, creatively produced, and extremely well acted series. The theme here is the inner torment of choosing between good and evil. And the cast is absolutely up to the task. Josh Hartnet has fortunately returned to the screen as the gallant but tortured Ethan Chandler, nee Talbot. Harry Treadaway is at his questioning best as Victor Frankenstein. Rory Kinnear plays both Frankenstein's monster and the human he was before being used for spare parts with nuance and depth. And Eve Green, one of a handful of today's truly gifted actors, is a beautiful revelation. I could watch her play a chair and enjoy every minute of it. No actress today throws herself, mind and body, into a character with such believable abandon like Ms. Green . She is not to be missed. Nor is the series. The best of the best. Highly recommended

SalawayonReviewed in the United States on June 21, 2016
5.0 out of 5 stars
Probably one for my favorite shows of all time
Verified purchase
Probably one for my favorite shows of all time. Well written and acted and keeping to the Gothic theme, I am sadly disappointed that there will be no other seasons with such great characters and potential storylines. It is an untidy rushed ending but it was beautifullying delivered by Eva Green and Josh Hartnett. They both brought depth and soul and avoided the contrived cornyness that they could've easily fallen into. The beauty of the whole show was they were all flawed characters, who you as a viewer can at some point, for both heroes and villains can empathize with....well not all villains...there were a couple who deserved their fate. Rumor has it that the show couldn't meet its ratings which is a shame because truly it is a five star show. I read the interviews from the writer in Variety but I'm not thrilled about his reason to end it. Shame for Showtime running this subscription scam only to pull the plug on one of the best shows its produced.

No. Va. MomReviewed in the United States on April 17, 2018
3.0 out of 5 stars
Much to enjoy, but doesn't live up to first season.
Verified purchase
The first season of Penny Dreadful is such a vivid synthesis of characters and themes from classic horror fiction, suffused with Romantic period poetry, that you wonder whether it can possibly sustain that energy to new seasons. Not really, sigh. I wish the news were good, but as the second and third seasons continue, the writers fall back more on worn-out horror conventions, while the story line around Josh Hartnett's character becomes increasingly ridiculous and Vanessa Ives starts to feel like an occult version of the heroine in the Perils of Pauline. Only John Clare and Lily/Victor Frankenstein/Dorian Gray's story lines grow in dramatically satisfying ways. It's still worth watching, but as the song goes, the thrill is gone.
One person found this helpful

Jaynie St.PierreReviewed in the United States on June 21, 2016
5.0 out of 5 stars
It's absolutely Dreadful that Showtime is ending Penny Dreadful!
Verified purchase
Penny Dreadful has always been amazing & mostly the kind of "scary" stuff & characters we 60-75 yr olds grew up loving...Frankenstein, Dorian Gray, Bride of Frankenstein, a werewolf, witches, tarot cards & freak shows & a cast of awesome actors! Now Season 3 brought us Dracula, an old-time insane asylum, American Indian mysticism & magic, but unfortunately & heartbreakingly an end to the series, which caught us by surprise. The only things I didn't like about the series, which has a lot to do with my age, were the battles with the devil & demons that the 2 best reasons for watching the show (Vanessa & Ethan) had to contend with. Classic horror can be updated & amaze us with jaw-dropping special effects to scare us without bringing modern horror's warped idea that the devil has to be trying to steal souls! There's certainly enough true evil in the world today. Why bring the devil into what's supposed to be entertainment? Shame on Hollywood for starting this new trend in horror with 1974's The Exorcist! And shame on Showtime for letting the devil steal the show & Vanessa's soul, because this series could have lasted forever & been much better than HBO's stellar, one of a kind masterpiece for television. Showtime's series will never come close to HBO's!
5 people found this helpful

Carol Ockey KattReviewed in the United States on September 11, 2016
5.0 out of 5 stars
I've seen this series over ten times.
Verified purchase
This was so well-written and acted. I could not have asked for more, but I might have asked for less. I'd ask for the costumes for many of the monsters instead of the tightly fitted pubescent child costumes with the suspicious bull-whip marks on them. The actors were delightful, some new, some old friends. I love Mr. Dalton's stage-fit voice,but I can't say I like Rassilon any better for it. Mr Beale was terrific. But at some point I realized that he did a briefly adequate Napoleon in Black Adder Back and Forth. I was enchanted by his range. The highlight of the cast for me was Danny Sapani. He too was in the Whoniverse, playing Col. Manton--or Colonel Run away, as the Doctor called him. Colonel Manton Has completely redeemed himself. One rarely finds a man as butch as Sembene.
One person found this helpful
See all reviews
Back to top
Get to Know Us
Make Money with Us
Amazon Payment Products
Let Us Help You
EnglishChoose a language for shopping. United StatesChoose a country/region for shopping.
© 1996-2021, Amazon.com, Inc. or its affiliates