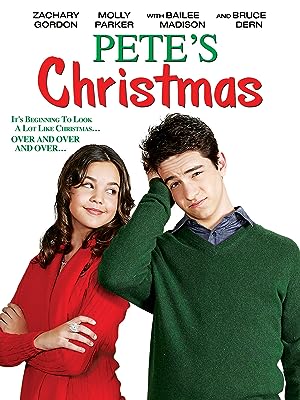 P. MannReviewed in the United States on November 25, 2014
4.0 out of 5 stars
Derivative but with a certain charm
Verified purchase
As others have pointed out, this film is essentially "Groundhog Day" set at Christmas with a younger protagonist. That's not a revelation. Anyone who has seen both films will catch the clear references to "Groundhog Day" in this film. And if I were rating this film based only on originality, it would get a very low score indeed. But the target audience for this probably will not have seen "Groundhog Day," and even so, the idea of repeating time is was not necessarily invented for "Groundhog Day." (See, for example, "12:01," which was a television movie released in the same year as "Groundhog Day.")

The premise is simple. Pete's Christmas does not go well. His parents forget to get him a gift, his brother blames him for things he didn't do, and his grandfather visits only to feel slighted and leave. Oh, well. Not every Christmas can be good. When Pete awakens the next day, it's Christmas yet again. And again. And again, and so forth. And as we go through probably hundreds of Christmases, Pete learns and one by one tries to right the wrongs of the first Christmas. In doing so, he learns a fair amount. I'll give an example that won't ruin much of the film, but it's a bit of a spoiler, so skip the next paragraph if you'd rather not have any more of the plot revealed.

As part of Christmas day, Pete and his brother play in a football game against the neighbors. At first, the neighbors win, as, it seems, they always do. But given the chance to relive the same day repeatedly, Pete realizes that he can win the game since he knows what the other team will do. And so he does--only to find out that his brother, the football star, is not satisfied. So Pete finds another way to win the game, this time addressing his brother's concerns. (Oh, and the solution seems silly and contrived.)

Certainly not the greatest film ever made, "Pete's Christmas" does have a certain charm and does seem to have its heart in the right place. And Bruce Dern as the cranky grandfather is lots of fun.

D. MckinzieReviewed in the United States on January 5, 2017
4.0 out of 5 stars
Keep living it until you get it right!
Verified purchase
I really didn't like this movie at first. The kids were mean to each other and no one was really very pleasant. But as the days progressed, the main character discovered that he could change AND make a difference in his own life. He realized that he liked his family and most of the things that they did for Christmas and other days of the year. Bruce Dern turned in another stellar performance, playing the crotchety grandfather who turns out to be better than he seems. By the end of the movie, I was enjoying it quite a bit. It did take a lot of story line from a movie that came out several years ago called (if I remember correctly) Christmas Every Day, but they put a different spin on it, so it didn't make that much difference. It's a nice family movie to watch. Probably won't be a family favorite (but it might be) but it will be enjoyed.
3 people found this helpful

MikkiReviewed in the United States on February 24, 2022
5.0 out of 5 stars
The ' repeat same day ' theme is really cute here
Verified purchase
I really do love " the keep repeating day till you get it right " theme. The characters are so likeable you route for them. It also really makes you laugh and is a cute Christmas movie.

So ReyReviewed in the United States on December 30, 2013
5.0 out of 5 stars
A Family movie with Christmas Spirit
Verified purchase
14 year old Pete keeps repeating Christmas day with hilarious outcomes. The movie is so well acted by the entire cast including Bruce Dern as the crusty grandpa. But Zachary Gordon's portrayal as Pete, the middle child is so heartwarming and funny. This is a likeable family everyone can identify with and the characters are very well written. The ensemble cast includes Bailee Madison as the next door neighbor who just moved in. Pete keeps trying to "fix" Christmas and learns valuable lessons along the way. This is quickly becoming my favorite Christmas movie. It is a film the entire family can enjoy. "Pete's Christmas" is a delight with wonderful messages throughout the story. I highly recommend this movie!
2 people found this helpful

Shari BReviewed in the United States on February 10, 2021
5.0 out of 5 stars
movie
Verified purchase
It's actually what you would call a "tweener" movie, for the kids, but I like it, too. It's a similar story line to Ground Hog Day, which I also like. If you like this type of story line, you will like it.

L. JensenReviewed in the United States on December 4, 2018
5.0 out of 5 stars
One on my favorite Christmas movies. Funny, sweet but not cloying
Verified purchase
This movie has the right mix of ingredients. Tried and true themes, modern twist, funny, sweet, with a dash of bitters and a sprinkle of happy. A teen boy relives Xmas till he works out the bugs, learns about life, people and what makes us all tick and what makes for a Merry Christmas.
One person found this helpful

Amazon CustomerReviewed in the United States on October 19, 2021
5.0 out of 5 stars
A funny Christmas movie for the family with a beautiful lesson in the end.
Verified purchase
This movie has humor and family values. It's about an imperfect family that makes many changes to become a happier family because one boy learns that Christmas is better if lived unselfishly.
See all reviews
Back to top
Get to Know Us
Make Money with Us
Amazon Payment Products
Let Us Help You
EnglishChoose a language for shopping. United StatesChoose a country/region for shopping.
© 1996-2022, Amazon.com, Inc. or its affiliates