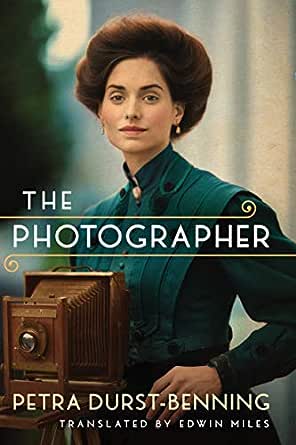 You've subscribed to The Photographer's Saga! We will preorder your items within 24 hours of when they become available. When new books are released, we'll charge your default payment method for the lowest price available during the pre-order period.
Update your device or payment method, cancel individual pre-orders or your subscription at
Your Memberships & Subscriptions
There was an error. We were unable to process your subscription due to an error. Please refresh and try again. 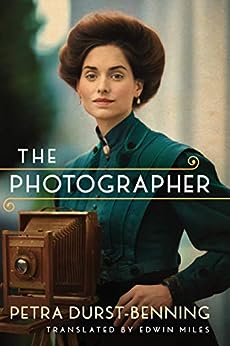 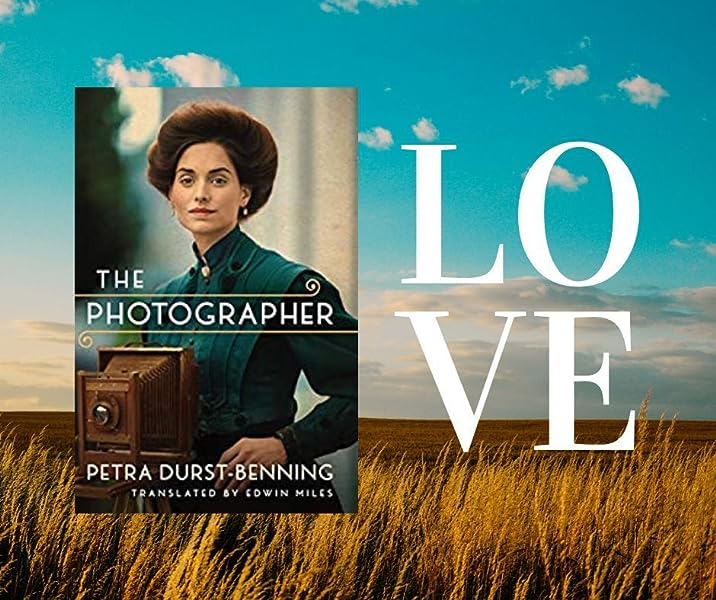 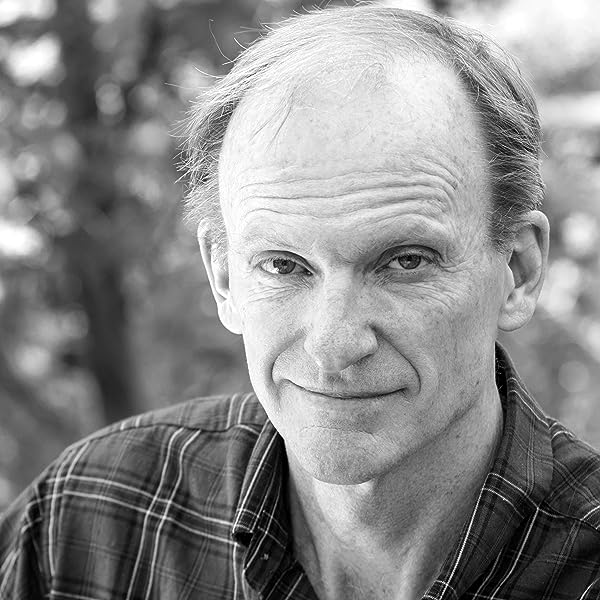 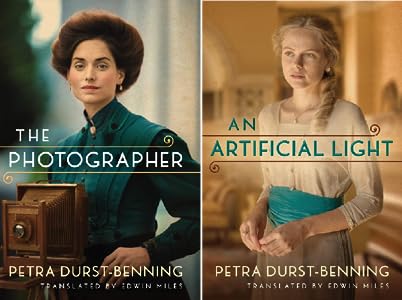 Enter your mobile number or email address below and we'll send you a link to download the free Kindle App. Then you can start reading Kindle books on your smartphone, tablet, or computer - no Kindle device required.

Page 1 of 1 Start overPage 1 of 1
This shopping feature will continue to load items when the Enter key is pressed. In order to navigate out of this carousel please use your heading shortcut key to navigate to the next or previous heading.
Back
Next
Amazon Business : For business-only pricing, quantity discounts and FREE Shipping. Register a free business account

Petra Durst-Benning was born in Baden-Württemberg, Germany, in 1965. For more than twenty years, she has been writing bestselling historical and contemporary novels, including The Glassblower’s Trilogy, The Century Trilogy, and The Seed Traders’ Saga. Translated into several languages, Petra Durst-Benning’s novels have sold more than a million copies in English. She now lives with her husband and two dogs in the countryside south of Stuttgart. For more information, visit www.durst-benning.de.

Edwin Miles has been translating in the film, television, and literary fields since 2002. Originally from Australia, he completed his MFA in fiction writing at the University of Oregon in 1995, where he worked as a fiction editor on the literary magazine Northwest Review. In 1996 he was short-listed for the prestigious Australian/Vogel Award for a collection of short stories. Miles’s translated works include Petra Durst-Benning’s The Century Trilogy and The Seed Trader’s Saga, Bernhard Hennen’s The Saga of Elvin, and Jonas Winner’s Berlin Gothic novels. After many years of living and working in Australia, Japan, and the United States, he now resides in Cologne, Germany, with his wife, Dagmar, and their children.

4.3 out of 5 stars
4.3 out of 5
302 global ratings
How are ratings calculated?
To calculate the overall star rating and percentage breakdown by star, we don’t use a simple average. Instead, our system considers things like how recent a review is and if the reviewer bought the item on Amazon. It also analyzes reviews to verify trustworthiness.
Top reviews

Carolyn Hill
3.0 out of 5 stars I loved the book, but . . .
Reviewed in the United States on March 26, 2020
Verified Purchase
I loved the book, but the author didn't wrap up the story lines. She just chopped it off without resolution of anything. I assume she's banking on us buying the next book to find out what happens, but I'm afraid she'll do the same thing after that. Ugh. Such a great author and book to be so disappointed.
Read more
27 people found this helpful
Helpful
Comment Report abuse

echo93
1.0 out of 5 stars Disappointing
Reviewed in the United States on April 4, 2020
Verified Purchase
This book was an enjoyable read typical of this author. However, the story just stopped. There was no resolution to any of the conflicts introduced throughout the story. If this was done to get me to purchase the next in the series it has backfired. I am so annoyed and disappointed that I will on principle not bite and will not purchase the next book in this series. Time to find something else mindless to read.
Read more
13 people found this helpful
Helpful
Comment Report abuse

Judi T
5.0 out of 5 stars The Photographer
Reviewed in the United States on March 15, 2020
Verified Purchase
Mimi was a very captivating and totally compelling character with very strong ideals. Her Uncle Josef gave her the gift of photography and the beauty it could show. Thankfully she had parents that supported her decision making her lifestyle of traveling to take photographs. Your storytelling is remarkable and intriguing in how you weave your characters lives and happenings together. Totally enjoy your style and book's, Please keep them coming!!!!!!
Read more
10 people found this helpful
Helpful
Comment Report abuse

linda galella
TOP 50 REVIEWERVINE VOICE
4.0 out of 5 stars Very good historical fiction based on a real
Reviewed in the United States on March 4, 2020
character from early 20th century Germany.

Mimi has broken with all traditions and declined a marriage proposal for following her dream to become a traveling photographer. It’s extremely non-traditional for the time period but her passion and she’s strong willed, talented and driven. Following the example of her uncle, Mimi sets off on her adventure and the story ensues.

Petra Durst - Benning is a seasoned, German author of historical fiction. This book is well written and the translation is clean. At times, the dialogue slips into language that’s more appropriate for contemporary characters but it lasts only a sentence and then fades. The prose is solid and a good feeling of time and place are easily accessible to the reader.

What’s not available is a conclusion; for those that dislike cliff hangers, you might be a tiny bit upset with this ending as there are many threads left unresolved; VERY MANY. The wait won’t be too long as the concluding volume is due out in September of 2020.

Benning has penned a clean story. There’s no foul language, sexual content or violence to speak of. The heroine is a courageous woman and the supporting characters run the gamut from quirky uncle to fleeting paramour and everything in between. An intriguing read with open issues I liked enough to read the sequel . Read & Reviewed using my Kindle Unlimited subscription📚

J. S. Bandich
4.0 out of 5 stars Saga Indeed!
Reviewed in the United States on March 30, 2020
Verified Purchase
As with all of Petra Durst-Benin’s be is the heroine is a female pioneer in her field, in this case, photography. Once she had reached a level of success, the saga begins with her meeting and leaving a man she could not forget, choosing to put her successful career in hold to nurse her beloved uncle through his final days, and feeling trapped in the small, rigid culture of a weaving town and its traditions in the early 20th century. However, her natural resilience asserts itself and creates waves. Another great read! Looking forward to sequels.
Read more
5 people found this helpful
Helpful
Comment Report abuse

bebe b
2.0 out of 5 stars Disappointed
Reviewed in the United States on March 9, 2020
Verified Purchase
Usually I love this book author. The ending left much to be desired. I am hoping the next book will satisfy.
Read more
8 people found this helpful
Helpful
Comment Report abuse

Myz
5.0 out of 5 stars Gripping
Reviewed in the United States on March 24, 2020
Verified Purchase
Another well developed story which incorporates history with fiction.I love how Petra makes her characters come alive on the pages and leaves you wanting more. Hated that the tale ended and I have to wait for book 2.
Read more
3 people found this helpful
Helpful
Comment Report abuse

Ginger Russell
5.0 out of 5 stars Good Book
Reviewed in the United States on June 17, 2020
Verified Purchase
I really liked this. I'm a photography buff, and for some reason there are a lot of books featuring photographers right now. This one was interesting since it takes place in the early 1900's in Germany. There is a lot of information about the cameras and also the small towns in Germany around that time. The main character is a strong woman who is able to live her dream of being a traveling photographer. It ends with a surprise, and there is obviously more to the story. The second book in the series comes out later this year.
Read more
One person found this helpful
Helpful
Comment Report abuse
See all reviews

D. Collins
2.0 out of 5 stars This is only half a book, so don't buy!
Reviewed in the United Kingdom on June 27, 2020
Verified Purchase
As a photographer this looked like an interesting book, and it had the makings of a good story. However, it ended very abruptly before any of the narrative threads had been resolved. I couldn't believe it when I turned a page only to discover that I would need to wait for the second 'episode' (to be published in September 2020) to continue the story. I don't mind watching a TV series when I know that there are several episodes, but I object to buying what purports to be a self contained book, only to find that it isn't!
Read more
3 people found this helpful
Report abuse

Nananooz
5.0 out of 5 stars wonderful book
Reviewed in the United Kingdom on March 9, 2020
Verified Purchase
This is another amazing read by Petra I have read and enjoyed all her previous books and now cannot wait for the next installment Thank yoy Petra for the enjoyment your books gives me
Read more
5 people found this helpful
Report abuse

thenunn
4.0 out of 5 stars Enjoyed but why end there
Reviewed in the United Kingdom on May 2, 2020
Verified Purchase
A young woman ,sets off to follow in her favourite uncles footsteps..loved the characters ,Anton is a strong ,can do boy i think ,and Alex,well I hope his art takes him far. Mimi, I picture as quite tall ,slender, big eyes ,masses of hair beautifully kempt. I loved the story , the descriptions of people ,places, feelings ,all wonderfully woven .
My only gripe is the ending ..why leave it in such a way , a bad way ..I know you want the reader to buy the next in the series , but by the time that comes out ,I feel the connection between them will be lost. I did not feel it was a good plac e to finish this book .
Read more
2 people found this helpful
Report abuse

Elaine
5.0 out of 5 stars Another enjoyable read from Petra Durst-Benning.
Reviewed in the United Kingdom on July 7, 2020
Verified Purchase
Having read Petra's other stories, I knew this one would be well researched into the lives of the characters. The main title character always has an interesting profession which tempts me to read on. Having pre-ordered the next part should tell you how much I have enjoyed The Photographer.
Read more
One person found this helpful
Report abuse

Kindle Customer
4.0 out of 5 stars A good read.
Reviewed in the United Kingdom on June 5, 2020
Verified Purchase
But a little predictable. So although the characters are likeable, the small town feel is similar to her other books. With the poorly paid workers and their harassed wives wishing for a better life, it did have the same air of them.
Then a newcomer shakes them up a bit, before she has settled in and come to see that there is not much choice to dream big. Finally the prodigal son returns, what will happen next?
Read more
Report abuse
See all reviews