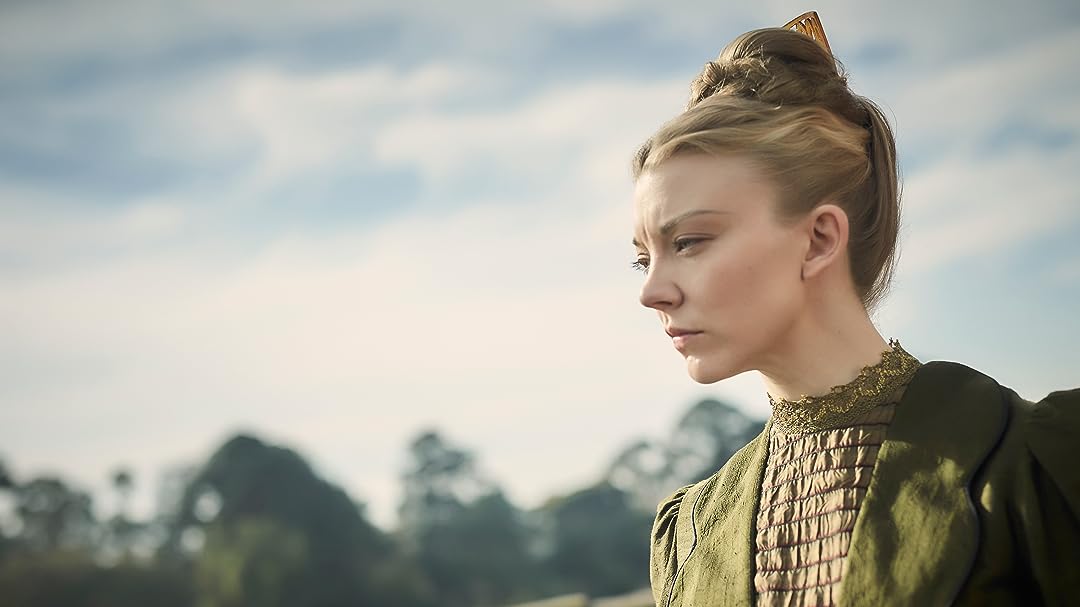 Season 1
(353)
6.22018X-Ray16+
A reimagining of the iconic Australian novel that plunges us into the mysterious disappearances of three schoolgirls and their governess on Valentine's Day, 1900. Exploring the event's far-reaching impact on the students and staff of Appleyard College, their enigmatic headmistress and the nearby township, theories soon abound, paranoia sets in, long-held secrets surface, and the mystery deepens.

Bgirl1400Reviewed in the United States on September 28, 2018
1.0 out of 5 stars
Why is it tv-14?! It has full male frontal nudity
My biggest problem is the rating is wrong. This is definitely tv-ma. If you're watching this with your teenage children, or your parents, or really anyone but yourself, beware of several awkward nude scenes. In the 2nd episode, you see full male frontal nudity. Penis, scrotum, everything. And it's not a scene where you'd expect it. And in episode 1, you see naked men and women from the back. The rating is soooo misleading.
107 people found this helpful

B. WellsReviewed in the United States on June 1, 2018
4.0 out of 5 stars
A Surprisingly Good Mystery From the Land Down Under
Verified purchase
There certainly seems to be a lot of hate for this miniseries but I thought it was very well done. Neither having read the book upon which it is based, nor watched the 1970's Peter Weir film, I was aware that this was the story of teenage girls at a "posh" school in the Australian Outback and the titular picnic at Hanging Rock, from which they mysteriously vanish. Going into it with relatively little information other than that, I have to say that I found it intriguing enough to binge-watch episodes 3-6, and really don't see it as deserving of all the hate it is getting.

The always-enjoyable Natalie Dormer stars as the sinister Mrs. Appleyard, a transplanted Londoner who has opened the girl's school bearing her name in the middle of nowhere. Mrs. Appleyard has many secrets and a past that may not quite be proper and pristine; certainly, it doesn't pay to cross the lady. Mrs. Appleyard is assisted at the school by a hatchet crew of volatile instructors, one of whom, highly-strung and hyper-religious Miss Lumley seems to particularly relish dishing out corporal punishment to unruly girls. As Miss Lumley, Yael Stone gives a terrifying performance as a woman consumed by her faith, yet ingratiating in her willingness to tattle on her co-workers for their perceived misdeeds. Miss Lumley functions as Mrs. Appleyard's henchwoman, and her devotion to the headmistress is almost as strong as her devotion to God. The other three instructors, Mlle. de Poitiers (Lola Bessis), Miss McCraw (Anna McGahan) and Mrs. Delange (Sibylla Budd), have their qualms about the strict discipline at the school but they all do what Mrs. Appleyard demands--up to a point. Eventually, each has her "aha" moment. The core group of girls consists of headstrong, free-spirited Miranda (Lily Sullivan), the group's reluctant leader; snooty and insecure heiress, Irma (Samara Weaving) who believes she's going to marry the very-wealthy boy next door; beautiful, aboriginal Marion (Madeleine Madden), nursing a secret and forbidden crush; whiny and petulant Edith (Ruby Rees); and young and resistant toughie, Sara (Inez Curro) who idolizes Miranda. On a picnic outing with the rest of the students, Miranda, Irma, Marion and Edith decide to explore the forbidding Hanging Rock, the subject of unsavory and unsettling legends. Most of this group, along with Miss McCraw, seems to vanish from the cliffs into thin air, and despite their best attempts, searchers come up empty-handed. As established in the story, each girl had her reasons for wanting to disappear, but the local lawmen doubt that they went willingly. Was it a supernatural occurrence or the dastardly act of an all-too-human perpetrator? The inspector in charge of the case thinks it's the latter though the further he digs into the mystery, the more obtuse it becomes. In the meantime, his prime suspect, Irma's boy next door, Mike (Harrison Gilbertson), has a surprise or two up his own sleeve.

Everyone in the large cast does a fine job with his/her assigned character. I thought Inez Curro, as Sarah, was particularly touching and, in light of her character's arc, very sympathetic, indeed. Natalie Dormer is appropriately witchy as Mrs. Appleyard; she reminded me a little of Judith Anderson as Mrs. Danvers in Hitchcock's classic "Rebecca". With her head held high and a deadly calm demeanor, she issues orders and demands subservience from her staff and the students, even as she endures the veiled insults of the area's wealthy residents, who doubt the backstory she's woven for them. In supporting roles, Nicholas Hope and Roslyn Gentle are effective as Mike's snobby relatives, and James Hoare, as their hired man, is also excellent. Ditto for Don Hany and Jonny Pazlovsky as, respectively, Appleyard's potential suitor and the sergeant in charge of the case.

Directors Michael Rymer, Larysa Kondracki and Amanda Brotchie do a fine job, and the hallucinatory photography is outstanding. I would have given this five stars were it not for the fact that it seems to be missing a few scenes that would go a long way towards explaining a few things without giving away the central mystery. I'm not sure if the these scenes were intentionally omittted or if they were cut in the editing room but I feel that it was a big mistake not to have included them in the finished product. I also felt the ending seemed rushed and underwhelming; it felt like the series was unfinished. All in all, I really enjoyed this creepy mystery from down under and am glad I watched it.

A customerReviewed in the United States on June 24, 2018
4.0 out of 5 stars
Haters gonna hate I guess
The overly bad reviews here make little sense to me. Does the show take some risks in areas, trying to be different, and do some of those risks work better than others? Yes. Does it come close to ruining things? No. If you believe the author, the story is based on their personal dreams, and like any dream not everything is always going to make sense. Part of the directorial goals are to create a mood of confusion and uncomfortableness as well, so you need to know that going in.

One also needs to remember this is based on a 1975 film (and book) [[ASIN:B00217EF06 Picnic at Hanging Rock]], and it is trying to stay a bit true to those source materials. The series does have some erotic elements that I don't think needed to be there, but that was also part of the previous film. It's part of "keeping you guessing" as to what happened to the missing girls, where you don't know if it is murder, rape, jilted lovers, supernatural happenings, aboriginal ceremonies, or twists in time. If Fox and Scully were in Australia in 1900 this would feel like an X-files episode, and for those looking for a straight period piece they are going to have to adjust to that. There is a mansion and elaborate costumes, but this is not Downton Abbey.

If you don't like non-linear story telling, or want an ending that explains everything, you likely won't care for this. And despite the show pretending like it was based on true events, the only thing truly real about the story is Australia's mysterious Hanging Rock itself. I won't feel the need to ever watch this again, but I give it props for trying and succeeding at setting a mood and being something different.
56 people found this helpful

Amazon CustomerReviewed in the United States on June 22, 2018
4.0 out of 5 stars
It's slow but beautiful and intriguing
Verified purchase
This series has to be watched with the mindset of watching an indie film. It's slow but beautiful and intriguing. I love when time isn't linear and keeps you on your toes. I also love the subtle differences of all the girls and how they cope with being in a rigid boarding school during their adolescence in regard to forming relationships and figuring out who they are.
25 people found this helpful

MORReviewed in the United States on December 7, 2018
1.0 out of 5 stars
This is NOT TV-14--Amazon Should Re-Rate--PARENTS BEWARE
FULL FRONTAL MALE NUDITY, SIDE VIEW MALE NUDITY (2nd Show) --1st show Nekkid chick butt---

So SILLY ME---thinking this might be something worth watching--As an adult, having watched Tudors & GOT, saw the lead and thought "Excellent"---TV 14--when the 13.5 year old DAUGHTER started watching over my shoulder on 1st episode I was NOT WORRIED----

1st intro paragraph: She says "tits"---I'm thinking " That's TV-14?" --but we keep going.
Then a nekkid chick's full backside scene.
Proceed to 2nd show---
A complete scene with a guy walking up to another as he finishes swimming. FULL SIDE NUDITY--FULL BACKSIDE--long scene--I'm covering her eyes screaming "THIS IS TV-14???" Are we SERIOUSLY JUST PURITANS OR ARE THE STANDARDS THAT LOW THESE DAYS????!!!!

TV-14 Should NOT have NUDITY--I don't even think it should have Profanity or sexual adult themes---but maybe I'm just as ANTIQUATED AS MORALITY AND MODESTY?

The Final Straw---chick is under the bed, a man is over her--apparently shoots himself in the head and suddenly we're STARING AT A BLOATED OLD MAN'S FAT BELLY AND SCROTUM--FULL FRONTAL MALE NUDITY With all the bits---

So THANK YOU AMAZON---that's EXACTLY what I want my daughter's introduction to NUDITY ON THE BIG SCREEN to be like.

And now we know that AMAZON RATINGS CAN'T BE TRUSTED---EVERYTHING MUST BE PRE-SCREENED, AND AMAZON either has ZERO STANDARDS or they DON'T CARE ENOUGH TO RATE WITH ACCURACY.

Aside from ASSUMING---Always remember we can check IMDB Parent's guides for better reviews.
And if Amazon has a problem with the discussion of NUDITY and MALE ANATOMY for this REVIEW then maybe they should consider how it feels to get BLINDSIDED with it in one's face when it SHOULDN'T BE THERE.

TV-14---Amazon's new full frontal male nudity standards.
We shut it off but apparently the show sucked anyhow--read the reviews before losing 6 hours of your life.
The most ironic thing? This was the only thing I ever saw the lead chick in where SHE didn't get naked. ! (hindsight is 20/20; perhaps I should have known given her background).
41 people found this helpful