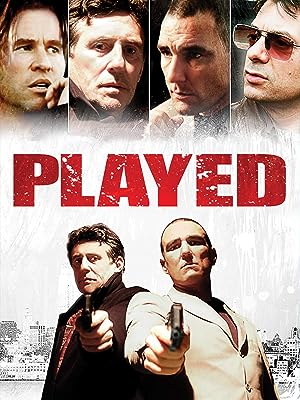 (49)
4.41 h 26 min2007R
After taking the fall for a heist gone wrong, thief-for-hire Ray Burns is back on the streets. Looking to settle the score, he must get back in the game one last time to take down his enemies. In this gritty look at London's criminal underground, Ray learns the hard way not to get Played.

James E. AddisonReviewed in the United States on March 26, 2021
3.0 out of 5 stars
An ending brought on by a used up budget.
Verified purchase
1 star: couldn't watch more than 15 minutes. Unwatchable!
2 star: jumped my way to the end for the ending. Unwatchable, but interested in how this turd ended.
3 star: watched it all, but not happy about it. Nothing better to do.
4 star: I watched it, liked it well enough. Would never watch it again.
5 star: Great moving picture show! I'll watch it again, and maybe again in a few years.

What a bummer of an ending. It had to be because the films budget was out of money. Let's just stop it here and leave it open to a sequel. This ain't no super hero franchise. It had potential, but they dropped the ball. What a let down!

joel wingReviewed in the United States on May 7, 2021
1.0 out of 5 stars
Story never got interesting
Verified purchase
Played is a crime drama that takes place across Los Angeles and London, which suffers from a poor start which foreshadows the entire story. Val Kilmer picks up Mick Rossi who is the main character. Rossi has been shot and puts him in his car to take him somewhere. The scene is lifted from Reservoir Dogs. Rossi even has a black suit on like Tim Roth did in Reservoir. The movie then flashes back to explain how Rossi got into his predicament which involved a corrupt cop and a heist. The problems continued as the story never gets that compelling. I actually re-watched the first 30 minutes to see if I missed something, but no, I didn’t. It’s just not interesting.

One strong point is Vinnie Jones is in it. I’ve always liked him since his time working with Guy Ritchie. It also has Steve Jones from the Sex Pistols as a gangster.
One person found this helpful

Bruce WinningReviewed in the United States on August 17, 2021
5.0 out of 5 stars
nice use of guns
Verified purchase
I like 16:9 video. I like 5.1 surroundsound. I like the action and violence. I like the shooting. There is not alot of shooting but enough to please me. Will watch movies like this.

Thomas Slattery Jr.Reviewed in the United States on March 24, 2021
1.0 out of 5 stars
Waste Of a bunch of character actors.
Verified purchase
Terrible, don't throw away your time and. don't let the thumbnail fool you.

Tuk&ampReviewed in the United States on September 27, 2014
1.0 out of 5 stars
Played, indeed!
Verified purchase
Terrible film! A total waste of time. Should have heeded the reviewers. But was "conned" thinking it could not possibly be that awful with Gabriel Byrne, Val Kilmer & Anthony La Paglia! Well, they "starred" for perhaps a total of 10 minutes adding nothing to the story just an "appearance" to solely get us poor suckers to watch the pathetically awful main cartoonish character who never seemed absent from the screen like an irritating fly..all I wanted to do was swat him off! Played, indeed, that we were.
2 people found this helpful

Cornelius A. MartinReviewed in the United States on December 19, 2017
1.0 out of 5 stars
One Star
Verified purchase
Garbage!!!
Sad thing is. I am a huge fan of Vinnie Jones.

J. BrownReviewed in the United States on January 18, 2018
1.0 out of 5 stars
Don't get played
Verified purchase
Just awful especially considering the cast. Dull, slow moving story with no one or nothing to care about.
See all reviews
Back to top
Get to Know Us
Make Money with Us
Amazon Payment Products
Let Us Help You
EnglishChoose a language for shopping. United StatesChoose a country/region for shopping.
© 1996-2021, Amazon.com, Inc. or its affiliates