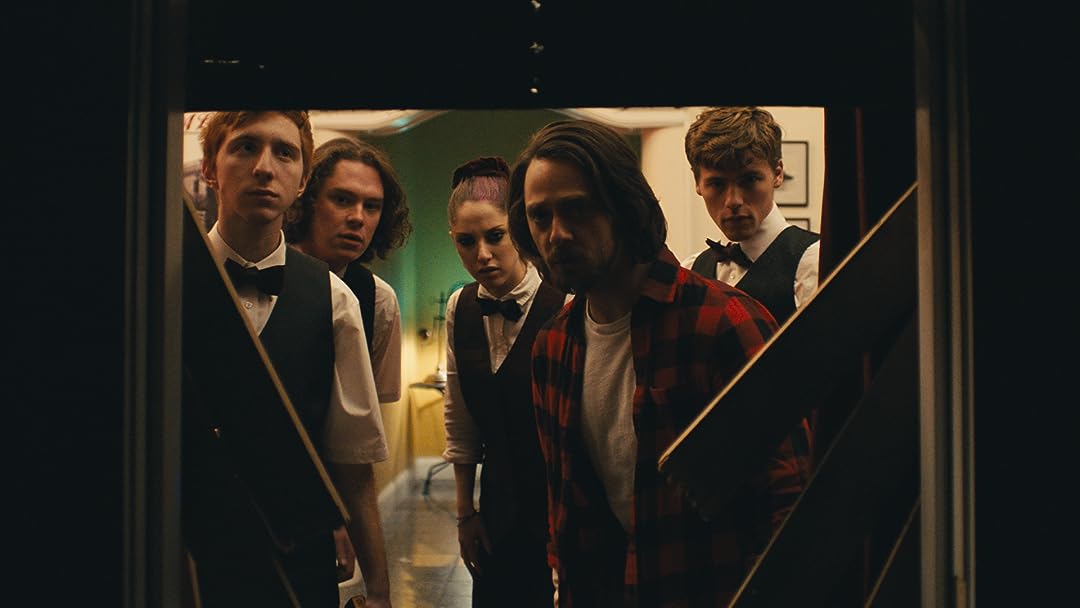 (476)
5.21 h 38 min202018+
Four repressed teens and a projectionist working at a small-town movie theater discover a secret room filled with vintage exploitation films. Playing one of the old films unleashes a demon who attempts to seduce each of them and steal their souls. Presented by Fangoria! SXSW Grand Jury Nominee 2019.

THEN THIS FILM IS FOR YOU! It plays like a mashup up of the two aforementioned movie series, but with more gore and nudity, but oddly less of a body count. No seriously, there's a distinct lack of deaths in this movie that really makes you question the PR the movie is getting. I mean, yeah, there's a few deaths but most of the characters get out with their lives. Maybe a little maimed, but alive.

Worth a view, but wait for it to get to Shudder

tv junkieReviewed in the United States on May 8, 2020
4.0 out of 5 stars
Funny, Scary, Frontal Graphic Nudity.
Verified purchase
I liked the humor included esp the religious aspect, perversion, and the woman playing the succubus. Very attractive. Story line plots and cast could have been developed more. Some of the tried and true moments are homages to other demon films but I thought it was well conceived. Some scenes were filmed too dark, shadows were overdone and so gotcha moments but it was light entertainment and some likeable actors. the one scene having to do with male genitalia was a bit too graphic and being in medicine he would have been in excruciating pain and not able to be heroic at all if that happened. But that is the magic of film, I guess.
5 people found this helpful

P or T's reviewsReviewed in the United States on February 9, 2021
3.0 out of 5 stars
More for the open minded than conservative......w/in reason
Verified purchase
Having liked scary movies for years
but being more in between with
the demonic ones. I was curious
enough to try it since it was free.

I'm going on my 3rd viewing of it
and even though a few scenes
make me cringe- being a guy
myself, you can probably guess
the cringe worthy scenes) and
a few made me jump, I do like it.

The sexual innuendo didn't bother
me much, and religious fanaticism
being face slapped again is always
a treat for me, calling them out
on their hypocrisy and deviously
scandalous behavior.
No I'm not anti- religion by any
means, but I do have issues with
'fans' who have this holier than
thou' persona to mask their own
imperfections.
But this isn't a sermon based
review so I'll stop there with that.
3 people found this helpful

Don CheetoReviewed in the United States on May 10, 2020
2.0 out of 5 stars
Disappointing
Verified purchase
Mediocre at best. I saw a lot of hype for this film and I decided to rent it. I had a difficult time finishing it, not because it was shocking, gory or anything, but because it is extremely slow pace. Not what I expected at all. It had a lot of good elements but was not properly executed. I would only recommend as a rental. There’s much better stuff out.
4 people found this helpful

Jim TrentReviewed in the United States on December 27, 2020
3.0 out of 5 stars
Not a bad movie for never hearing of it
Verified purchase
The acting, sound and video were all top grade. Most people will not regret the time they spent wasting it if they are a true horror film fan. It is not an OMG that was the shiznit type movie but it was decent. The demon is sexy enough that guys were probably thinking man I would so get caught by her. :)

The movie was tame even with the nudity except for one scene where they "patched" up the guy who had his testicles explode. That was a little over the top, maybe it is because I am a guy and the thought of how much pain that would be was the issue. I know getting your heart ripped out or arm-twisted off is bad too but it's a guy thing I guess where injury to there makes you wince. Even a small slap there can hurt a lot.

The movie had the potential for more but didn't reach it. It was good but not great like the original Dawn of the Dead (my favorite of those "of the Dead" movies followed by Night of the Living Dead) or Night of the Demons since others have referenced that.
One person found this helpful

AndrewReviewed in the United States on May 25, 2020
2.0 out of 5 stars
B Movie Near Miss
Verified purchase
This is a B movie that someone might throw on with friends and drinks, but I was waiting for the religious aspect of the movie to come back around to something less annoying, but it never does. There is certainly some commentary here about the hypocrisy of the religious right suppressing sexuality, but it doesn't do enough with that to justify the characters all being super religious people. Ultimately, the message seems a bit confused. If you come to this looking for gore and nudity (plenty of penis to go along with the full frontal woman as well) then you'll certainly get it. Unfortunately, I don't think the movie is funny enough to make it worthwhile considering its other shortcomings on story.
4 people found this helpful

CTBReviewed in the United States on September 6, 2020
2.0 out of 5 stars
Very Disappointed PG-13 Movie...about as Gory and Scary as Goonies.
Verified purchase
Not a good homage to throwback horror movies as well. Very Disappointed in Fangoria...they were once a name for those of us that loved underground Horror. This is a PG-13 (at best) movie because you see Boobs and a Penis. There is no Gore accept a few Buckets of Blood. It's certainly not Scary. And its not Campy or tongue in cheek funny.

Should have believed the 4.9 IMDB Score.
2 people found this helpful

J. WestReviewed in the United States on January 13, 2021
5.0 out of 5 stars
"Don't Unleash The Succubus Demon!"
Verified purchase
If you like exploitation films you'll love this one. It has extreme gore, extreme sex, fully nudity, foul language and drug use. Everything you'll love in a Horror & Comedy film. No known actors and actresses. But the roles are hilariously funny. The storyline is about when all of them find a hidden room filled with exploitation videos and they watch one of them but they unlock a Succubus demon and the fun begins. I recommend it if you'll love exploitation horror & comedy all together.
One person found this helpful
See all reviews
Back to top
Get to Know Us
Make Money with Us
Amazon Payment Products
Let Us Help You
EnglishChoose a language for shopping. United StatesChoose a country/region for shopping.
© 1996-2022, Amazon.com, Inc. or its affiliates