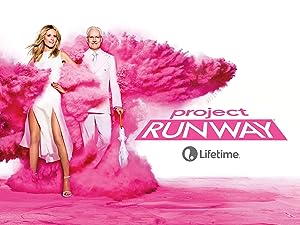 Perhaps whoever is responsible for recruiting and judging the contestants might want to establish consistent requirements, addressing design skill, creativity, innovation, sewing skill and whatever else Tim Gunn believes to be important. Then the judges who choose the contestants need to apply those requirements consistently. It seemed to me that the various judges applied various methods to determine who they chose to be on the show. Rather than how they felt about a contestant, I would require them to all use the same requirement checklist and methodology.

Best of luck . . . I'll watch every season anyway! I still keep up with my favorites from past years.

A.M.A.Reviewed in the United States on August 29, 2015
5.0 out of 5 stars
Best reality show of all time
Verified purchase
Reality tv is an impoverished genre and this show stands out as an excellent outlier. The participants are unusually skilled and interesting, and the judges are articulate, worldly and sensitive. I wish this winning formula could be applied to other areas of human endeavor but none seem so fit reality tv as perfectly as fashion. The judges portray just the right amount of integrity by generally championing design over commerce. There is a refreshing humanity within the fast-paced entertainment of the contest.
2 people found this helpful

FilmGeezerReviewed in the United States on September 12, 2015
3.0 out of 5 stars
Fraying At The Edges?
Verified purchase
By now, alas, the franchise has gotten a little predictable. Tim and Heidi are still trying, bless them, but the casting of the contestants has become almost cartoonish as the producers and Lifetime honchos have fallen back on "types" rather than looking for design skill. The challenges have become very convoluted, the product placement and sponsor influence rears it's ugly head very often. For example, the Sally Beauty folks, not content with their weekly pitching as part of each episode, decide to have the designers work out "nail art" as part of the challenge. You now, if you're going to insert yourself as part of the design challenge, not just as a sponsor, throw some cash at the winning designer, right? Trying to stir up drama, feuds, and confrontation . . . this is not what long-time viewers are looking for. We want to see great skills, creativity and - yes - a few real WOW moments on that runway. But the skill level is lower than ever, and so far this season, with a few exceptions (Ashley; Edmund, Candice, etc.) there have been precious few WOW garments. And what is UP with the lack of trips to Mood? And can we have at least a FEW more two-day challenges? Maybe the whole Project Runway idea is beginning to fray at the edges??? I'll continue watching, and I know many who will root for the series forever, but there are some changes and upgrades due at this point.
5 people found this helpful

Amazon CustomerReviewed in the United States on October 7, 2015
3.0 out of 5 stars
One of the poorest seasons
Verified purchase
Definitely not as interesting as past seasons have been. I wonder if they have used up the backlog of talented designers and are now left with those who have much less to offer. I also dislike the increased trend toward use of unconventional materials. I don't think that's a true measure of a designer's talent; it's more of a curiosity and I'm tired of it. I find myself skipping those episodes and falling asleep during others. I think this may have run its course.

I-HarteReviewed in the United States on August 31, 2015
5.0 out of 5 stars
Fresh and new designs
Verified purchase
Project Runway is my favorite show; I've been watching the show since it began. My all-time favorite challenges are the unconventional and the couturier challenge. It’s amazing to see the creativity each designer brings to the table each season. As long as I’ve been watching this show each season brings forth fresh and new designs. This season’s unconventional challenge was absolutely a show stopper. One of the designers created a wedding dress from Hallmark cards. The dress was stunning!!!!!!
Love this show.

Jo FlowersReviewed in the United States on December 22, 2017
3.0 out of 5 stars
A disappointment
Verified purchase
Spoiler Alert: I cannot BELIEVE that they chose Ashley for the final four, let alone as the winner. Were they trying to help poor Ashley with her confidence? And I was getting really p.o.'d with her constant whining about her confidence. Were they trying to do something they thought was politically correct? Yes, there needs to be some thought to what women who are not 2 sized (or 0) can wear and that they are not just the same style sized for a size 12 (let alone a plus sized woman) . BUT, that said, I found the collection BORRRING. That old lady lace! My God, who would wear those clothes? They are so far from fashion forward that I cannot believe that Klum, Posen and Garcia really liked them. They are so far from what they usually pick and embrace. Actually I cannot decide whether or not they are old lady (and old lady like old ladies used to be, but aren't anymore) or little girls who are wanna be Alices in Wonderland. And those horrid pastel colors! Toned down purples, toned down rose colors, blah! I wouldn't be caught dead in any of those styles nor colors. And the ridiculous floral headdresses.... OMG! How much did they pay Heidi to say she would wear them? I have never seen her in anything remotely like the bland colors and styles of Ashley's collection.

And if you think my thoughts about the collection has nothing to do with my rating of the show, it does impact on how I think of the show and the judges.

And, if I hear Ashley refer to herself as a plus size one more time, I will gag. I am not the kind of person who body shames people. But, c'mon, you are not plus sized, you are morbidly obese. It's just not healthyand you are endangering your life. So while I don't want to body shame anyone, on the other side let's stop embracing unhealthy weights. And maybe if she was a normal weight, she wouldn't have such confidence problems.

As for the other contestants, I thought Kelly should have won for just sheer inventivenes and creativity, using fabric and ideas in ways that no one else has ever thought of. I wouldn't necessariy wear most of any or her designs but I can appreciate what she did. As a matter of fact, I wouldn't have been upset if either Candace or Edward won, as both of their collections had simply beautiful clothes that I would wear if I had that figure and that kind of money.

Really disappointing and I usually love Project Runway and almost always agree with the judges, at least who they pick for the final Runway show.
One person found this helpful

Amazon CustomerReviewed in the United States on August 14, 2015
5.0 out of 5 stars
DISAPPOINTED CAN NOT PURCHASE FOR MY KINDLE
Verified purchase
What's going on, first no option to buy the season and now episode 3 is unavailable for purchase at this time. However the season is available on ITunes. This is one of my favorite shows. Unhappy I can not purchase for my Kindle.
11 people found this helpful