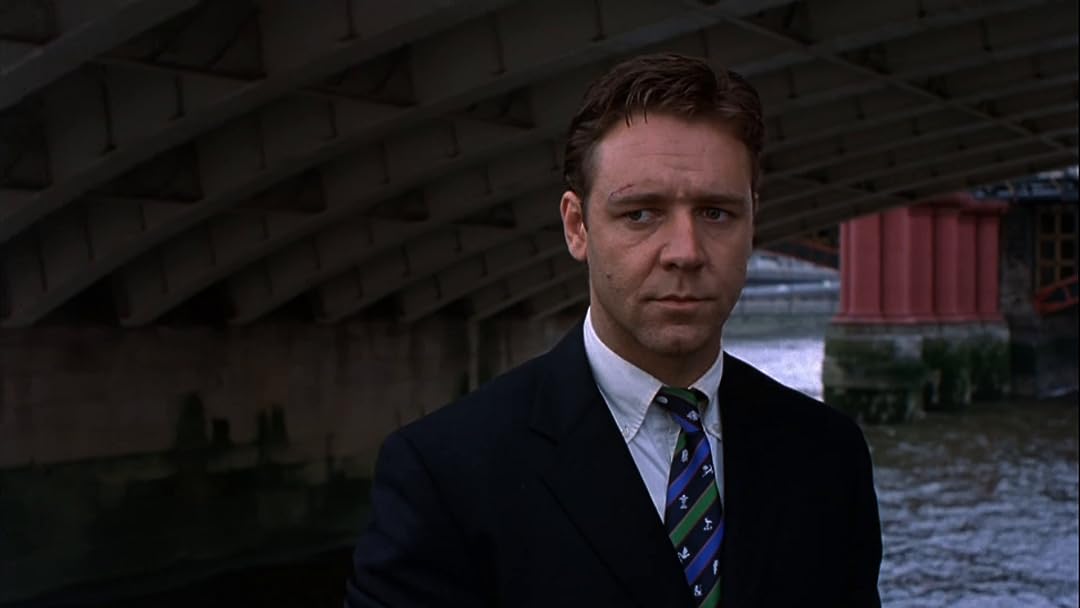 (1,658)
6.32 h 15 min2000X-RayR
When a U.S. citizen working in South America is abducted and his employers cannot buy his release, the man's wife hires a specialist for a daring scheme to free him.

Just Some DudeReviewed in the United States on March 21, 2021
5.0 out of 5 stars
It's Everything Today's Movies are Not
Verified purchase
(Spoiler alert) I have a lazy Sunday going and I decided to watch this movie that I had enjoyed long ago, not knowing how it would hold up. I forgot how good the story was, and the acting. It moves fast, you could pull it apart but the emotions and action and dialog just sweep you along. Perfectly paced, didn't feel slapped together or formulaic. It's kind of standard good guys win, hero stuff, but then it isn't too. (Spoiler alert) But there is a great payoff and a perfectly balanced, bittersweet vibe for the unconsumated affection that develops which is quite tender and touching. I can't remember the last time a movie came out of Hollywood that was this good.
3 people found this helpful

Connie CappsReviewed in the United States on May 17, 2014
5.0 out of 5 stars
Proof of Life.... Outstanding!
Verified purchase
Ah, be still my beating heart.... Russell Crowe gets the blood pumping every time, and "Proof of Life" was definitely a heart-pounder for me, not only because RC was in it, but also because it was an edge-of-your-seat, white-knuckle adventure that was made absolutely believable by RC, Meg Ryan, David Morse and even David Caruso. There was quite a bit of 'sexual tension' involved here between the lead characters, Terry Thorne (RC) and Alice Bowman (MR) which keeps one wondering if they'll forget about Alice's hubby, Peter Bowman (DM), and just run off together.

The story is set mostly in the Andes Mountains which are absolutely stunning in their stark, unforgiving beauty, and quite a challenge to Terry and his crew when the go to rescue Peter and the rest of the captives being held there. I'll not go into the storyline to any extent here, as you can read that for yourself here on IMBD. What I will attest to is that this film is definitely worth watching and will not fail to please those of you who enjoy a good adventure laced with sexually charged scenes which never culminate in actually engaging in the act. The dialogue between Terry, Alice, and Dino (David Caruso) is engaging, fraught with innuendo and with sinister undertones regarding the actual rescue of poor hubby Peter. I particularly enjoyed the fact that RC was allowed to use his natural Aussie accent in this one. Gotta love them Aussies!! And, let us not forget the 'supporting cast'; a small group of tough-assed ex-military men with whom Terry and Dino had worked before, and who are definitely up to the task at hand.

One of the best movies I've seen in quite some time! Kudos to the entire cast and staff who were involved with the making of "Proof of Life"!!

joel wingReviewed in the United States on September 23, 2021
3.0 out of 5 stars
Liked the tension and drama film created until end got very predictable and Hollywood
Verified purchase
I was pleasantly surprised by this movie. It’s about Russell Crowe being a hostage negotiator trying to free David Morse who was taken prisoner by Latin American rebels. I thought it would be rather routine but I liked the tension and drama that it created. Much of the movie is Crowe with Morse’s wife played by Meg Ryan. She is tortured by the situation and the extended negotiations and threats that are part of it. Morse goes through his own ordeal with the guerrillas. Yeah the end kind of ruined things by getting very predictable and Hollywood but I still liked most of the story.

Lisa SheaReviewed in the United States on September 13, 2001
4.0 out of 5 stars
Great drama with a few holes
Verified purchase
I really wanted to see this movie, to the point that, when they showed it on an airplane flight I was on, I purposefully didn't watch it because I wanted to get the full impact of it without interruptions. The movie is definitely worth watching and having, but it falls just short of truly shining.
I generally enjoy Meg Ryan, but in this script she comes across as a little *too* ditzy and unintelligent. There are definite "good guys" and "bad guys" in the film, and for someone who has been living in various situations around the world for several years, her character is blissfully unaware of much.
Her husband, Peter, is GREAT. He is by far the best role in the film, and I wish they had spent more time on him. They way he interacts with his captors, the situations that go on - these are really well done.
Terry - Russell Crowe - is very good as the man who understands and knows these situations, and who works diligently on the case despite not being paid. He and Alice begin to fall for each other as they work so closely together, and I wish that this, too, was developed better. Not that I wanted them to end up together, but the way in which their relationship changed and grew could have been better portrayed.
I'm a HUGE fan of samurai movies, and perhaps this is what a lot of this reminded me of - Terry doing what had to be done, doing his job, because it was the RIGHT thing to do. Yes, he is human, and has desires and fears, but he diligently tries to do his very best.
5 people found this helpful

Eric MayforthReviewed in the United States on July 21, 2013
4.0 out of 5 stars
Inside the World of Kidnap-and-Ransom Consulting
Verified purchase
In the 2000 movie "Proof of Life," Russell Crowe plays Terry Thorne, a kidnap-and-ransom consultant who takes on dangerous assignments in far-flung places around the world. When Peter Bowman (David Morse), an engineer who is helping build a dam in the fictional South American country of Tecala, is kidnapped by guerillas, Terry is hired to get Peter back to the United States safely.

Terry negotiates with the guerillas for months, and he must also try to keep Peter's wife, Alice (Meg Ryan) as calm as possible through the ordeal. As the movie progresses and his time in captivity stretches on, Peter must decide whether to try to make an escape attempt. The storyline is very good, and the characters wrestle with moral dilemmas, speculate on life, and ponder the question of whether things happen for a reason.

"Proof of Life" is enjoyable film and would be enjoyed by adults who appreciate adventure movies, but film is rated R for language and graphic violence, the latter making the film too harrowing for younger viewers.
4 people found this helpful

MelindaReviewed in the United States on January 5, 2015
4.0 out of 5 stars
Russell Crow blows my mind!
Verified purchase
I really badly wanted to give this movie five stars because I adore Russell Crowe & Meg Ryan, but I just couldn't bring myself to do it. The whole story, up to the point that he falls in love with Meg Ryan is perhaps the most accurate representation of how K & R insurance companies & agents work in the more dangerous parts of the world. David Caruso is weird, as usual, but in the best way. Everyone who has ever dealt with the K & R world who has gone on record has said that this is the most correct representation...right up until the love story, which jacks the whole thing! It didn't need a love story, and I thin it damaged the gravity of the movie. Other than that, it was perfect!
8 people found this helpful

Addicted ReaderReviewed in the United States on March 13, 2014
5.0 out of 5 stars
A Good Movie
Verified purchase
I heard the critics panned this movie, but I loved it. Meg Ryan is so sweet and a darn fine actor and Russell is a great actor. The plot was believable. I think most people will enjoy it unless they only get hipped up on 500 impossible car races and fights that if they happened in reality would kill all the actors who took part in it. This has its thrills, its problems. Everything one could ask for. A highly underrated movie that most people will thoroughly enjoy. If you want a highly intellectual movie, don't get it, but I don't mean it has been dumbed down. It just goes for saving one man with no long political speeches about how we should get mixed up in another country's problems even if somebody should. Go ahead see the movie. If you don't like, write me why you're so stuffy you couldn't enjoy this fine picture.
5 people found this helpful

R. J. MarsellaReviewed in the United States on December 27, 2002
4.0 out of 5 stars
Gripping action sequences
Verified purchase
After several viewings I've got to say that I really enjoy watching this movie. Russel Crowe and David Caruso are great as K&R experts. David Morse is really outstanding in his portrayal of a kidnapped American engineer being held by a group of Latin American rebels. I have to agree with some others on this site that Meg Ryan's performance doesn't quite measure up to the others in this film but that didn't detract too much from the overall enjoyment for me. The action sequences are tense and well written. The South American setting is fantastic. One scene that stands out for me is When Crowe and Caruso bust in on a rival who is planning to defraud the distaught wife (Ryan) and her sister-in -law who are counting money and putting it into garbage bags as a payment for proof that the kidnap victim is alive. The final rescue scene will have you on the edge of your seat.Overall this is an interesting film on an unusual topic that is well acted (for the most part), well written, and well directed. If not for Ryan's mediocre emoting I would have given it a 5 star rating.
5 people found this helpful
See all reviews
Back to top
Get to Know Us
Make Money with Us
Amazon Payment Products
Let Us Help You
EnglishChoose a language for shopping. United StatesChoose a country/region for shopping.
© 1996-2022, Amazon.com, Inc. or its affiliates