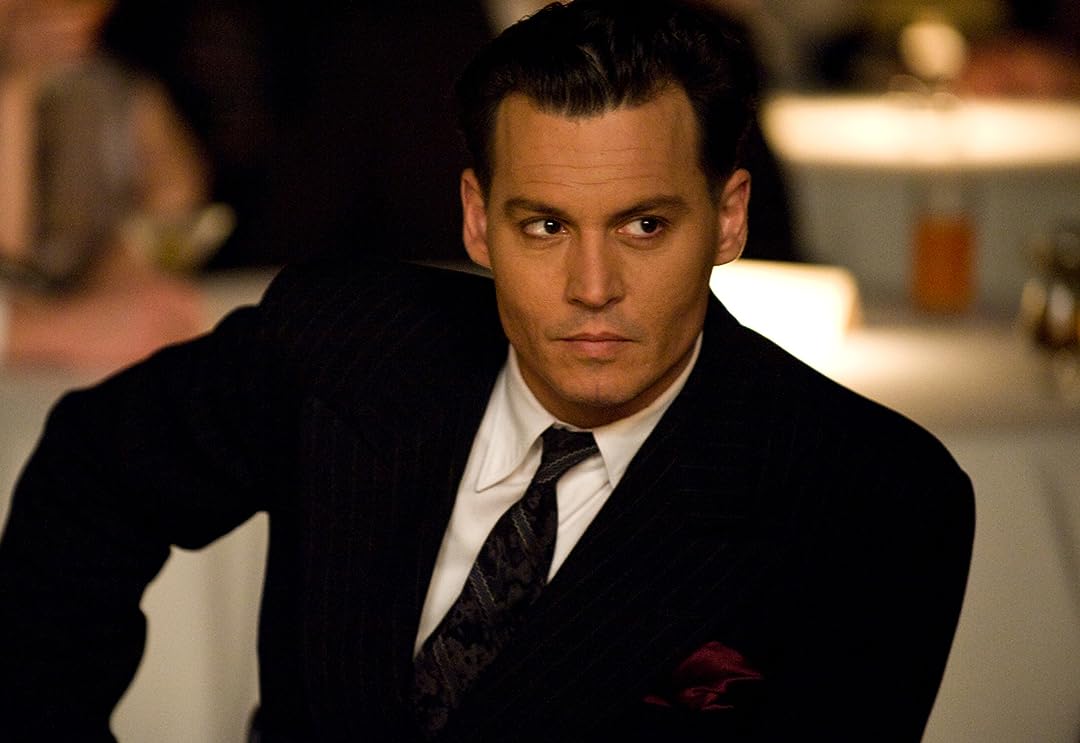 porscheReviewed in the United States on September 21, 2017
5.0 out of 5 stars
JOHNNY DEPP AT HIS BEST
Verified purchase
This movie was, IMHO, Johnny Depp's best movie - he personified Dillinger with the requisite bravado, swagger, and invincibility that was true Dilllinger. The movie, I believe, is also very close to what history has recorded re Dillinger's life and his end - he literally never saw it coming. Just a great movie all around, and Marion Cotillard was also exceptional as Dillinger's girlfriend Billie. Stephen Lang was likewise exceptional - a very versatile actor - you would never think that he was the same guy who played Ike Clanton in TOMBSTONE. Well done all around, exceptional movie.
20 people found this helpful

Richard H. StrobelReviewed in the United States on August 19, 2018
3.0 out of 5 stars
Still not sure....
Verified purchase
I saw this film on opening night after months of expectation. Michael Mann, Dillinger bio-pic, Johnny Depp and other great actors, what’s not to love. Two hours and twenty mins later I feel like I got off a ride I should have liked but it went backwards instead changing what I was expecting and hoping for. And not in a good way. After seeing it on the screen, buying the DVD and watching several times, buying the blue ray and watching it several times I “still” am unsure of what I don’t like about it. Other disgruntled viewers are more clear on why they disliked or downright hated the film. As I’m watching it, it has great performances, great locations; some authentic like Little Bohemia Lodge, great photography, great action sequences shot in the usual Michael Mann attention to detail... but let’s back up to the photography point. I think this is the problem. I ‘think’...still not 100% sure. Mann is so hell bent on making it authentic, as with all his films, which is great but by doing so it does not link one to the “myth” of Dillinger. It seems one cannot be done without sacrificing the other in this film. If one is not well read on the Dillinger and gangster era of the 1930’s then the film may well work splendidly, but if on the other hand, like mine, you are well versed in that era then the up close and personal handheld type of photography done in the film may not work. Even when is “should”. What this film brings with it, a rich and very realistic setting that one expects to see outside the movie theatre, does not capture the “myth” and far away nostalgia that that far gone gunslinger wild-west era seemingly is used to being seen as. Maybe, maybe not. I’m still not sure. Something is not working here.
For all its historical accuracy, well as much as a dramatic film can be unlike a straight documentary, I still prefer the 1973 John Milius “historically inaccurate” film much better. It is a "low budget" film and made by the golden boys of Indie drive-in exploitation at the time, American International, but Milius' deft hand lifts the film to mythic levels to how ordinary people in the “dirty-30’s” regarded Dillinger, a Robin Hood figure robbing the much hated banks and leaving the FBI in the dust. This is a fable and Dillinger is an anti-hero... AND it works on that level. Unlike the Mann film which when all is said and done leaves one with an unsatisfied feeling.
6 people found this helpful

Third Stage LensmanReviewed in the United States on December 12, 2018
1.0 out of 5 stars
How Can You Make This Dull
Verified purchase
John Dillinger! Robbing banks! Nemesis of J. Edgar Hoover!

Seriously, you have a movie about John Dillinger, starring Johnny Depp, with Christian Bale. It's by Michael Mann, of stylish Miami Vice fame. How can these people make a movie this dull, this slow, this plodding.

Seriously, it's beyond me. Great material to work with and great actors and heists galore. And it's just . . . dull.

Todd M.Reviewed in the United States on March 21, 2021
3.0 out of 5 stars
Too much FBI… especially Melvin Purvis: G-Man.
Verified purchase
It was just too long and it became boring because it just didn’t seem to know what it wanted to be about… the “public enemies” or the FBI. If I wanted to see the FBI side of it I would watch The Untouchables again but I was expecting to see a movie about gangsters and bank robbers and that ended up being somewhat overlooked to include more about the pursuers. I’m guessing that there was much more to dell about Dillinger, Floyd and Nelson that could have made this an excellent drama by merely adding some more robberies and getaways or even including some more about the Chicago mob and how they offered protection to these guys. By adding all the FBI drama it just made it too long and too long made it boring once it drifted away from the outlaws. If, as the synopsis states, the film was “...inspired by one of the country's most captivating and infamous outlaws” they didn’t devote enough time to these characters and that was a letdown.
One person found this helpful

joel wingReviewed in the United States on January 22, 2021
4.0 out of 5 stars
Very well made crime drama pitting John Dillinger vs the FBI
Verified purchase
Johnny Depp is famed Depression Era criminal John Dillinger. Pitted against him are Billy Crudup as J. Edgar Hoover and his agent Melvin Purvis played by Christian Bale. The movie has a good mix of bank robberies by Dillinger that provides the action and the gun play and the police investigation and chase by Agent Purvis. The FBI are portrayed as rough guys not the clean G-Men Hoover liked to call them. Thrown into the mix are some other outlaws of the era such as Baby Face Nelson (Stephen Graham) and Charles Floyd (Channing Tatum). Plus there’s some interesting twists to the story as well. It’s a very well made crime drama by Michael Mann.
C
3 people found this helpful

Samantha FennimoreReviewed in the United States on August 21, 2018
5.0 out of 5 stars
Great movie with such a great cast
Verified purchase
Great movie with such a great cast!
Watched it because when I met my boyfriend about a year ago, he told me that I look like Marion Cotillard, the french actress who places Billie in this movie. I told him that I was adopted from Romania and he was watching it and said that me and her kind of sound alike. I don't really hear it or see it, but I do think she is a amazing actress and super beautiful.
We are black birds

GiGiReviewed in the United States on January 18, 2010
5.0 out of 5 stars
Oh, Johnny!
Verified purchase
Other reviews - negative ones - fault the movie for the overly quiet or mumbled dialogue, the quality of the filming, the dragging plot, etc. etc. etc. Here's my take:

1. The quiet dialogue was counterpoint to the raging violence, thus intensifying it. (I had no trouble understanding the dialogue.) The similarity of tone between Depp and Bale pointed out the similarities and differences of character as well, helping to blur distinctions between the inner workings of lawmen and lawless. Christian Bale's monotone was ideal for showing the singleminded intensity with which Purvis pursued Dillinger, and Depp's low voice as Dillinger stood in stark contrast to the violence he was willing to wreak.

2. The filming seemed in keeping with the era being portrayed, falling into almost sepia tones at times, and having a film noir quality that is perfect for the subject matter. The jerky hand-held camera gives the viewer the impression that one is watching a newsreel of the action and heightens the sense of viewer participation. Because of this "you are there" quality, I wished I could duck behind something, too, as the bullets were zinging past.

3. The plot was protracted to give a sense of the extended conflict between Dillinger and the government agents, to lend depth, and to heighten tension.

Marion Cotillard as Dillinger's softly wide-eyed lover, Billie Freschette, is the perfect pairing with Depp's piercingly intense portrayal of Dillinger. The two together push the rest of the cast into the background.

I found the film to be brilliant in all its aspects. Johnny Depp is a genius, and even if the film had no other redeeming factors (which it does, in plenty) his performance has ample merit to warrant the five star rating.
23 people found this helpful

D. SteigmanReviewed in the United States on December 12, 2009
3.0 out of 5 stars
Really solid modern gangster film - Id give it 3.5
Verified purchase
Johnny Depp as John Dillinger & the law (headed by Christian Bale) is out to get him...it's as simple as that. I really enjoyed this film for the most part. It might have been a little long but overall it was well done. The acting was superb & there was plenty of shoot em up action. The best part was the fact that this was a tale from the 1930s and I love the 1930-1940 gangster movies.
This of course did not have the charm of that era, nor did it have a Cagney, Bogart, or Robinson as well as Warner Brothers production values of that era to make the movie a superior effort but the cast was more than adequate. I loved watching those chase scenes in those older 1930s style automobiles.
Part of me thinks that if the producers of films back then had the budget to make a film like this they most likely would have. One thing I liked about this movie was the story of how Dillinger met and fell for Billie Frechette (played by Marion Cotillard). Usually in the old crime dramas, the head crime boss usually had his 'dame'(as called in that era) already with him and in love with him. In this movie we get to see exactly just how a lady would fall for a crime boss. I thought it was a nice touch.
Still better was the fact that this was a PG-13 - so the gore in this is purely your typical gunfire gore - I personally didn't find it overly bloody. Even better was the fact there was no scenes of a character vomiting which has become a standard in most newer films these days. It seems like every new movie (even Transformers & the latest Harry Potter film had this) has an obligatory barf scene which to me is unnecessary and not entertaining at all.
Overall this was very good and while this might not be an all time classic, fans of older crime dramas and gangster films should find this to their liking..
Of course the 2 disc DVD is the way to go if you are a collector and liked the movie..
3 people found this helpful
See all reviews
Back to top
Get to Know Us
Make Money with Us
Amazon Payment Products
Let Us Help You
EnglishChoose a language for shopping. United StatesChoose a country/region for shopping.
© 1996-2021, Amazon.com, Inc. or its affiliates