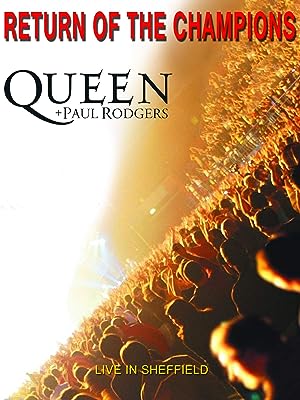 Marco GonzalezReviewed in the United States on September 20, 2022
5.0 out of 5 stars
Standard DVD is PAL format. Won’t play
Verified purchase
This DVD would not play due to it’s format (PAL). I don’t know what this means. So be careful when buying. The blue ray is hard to find which I prefer. This is a must have concert singer Paul Rogers does a great performance. Marco

Janice S.Reviewed in the United States on May 20, 2022
5.0 out of 5 stars
WHAT ARE YOU WAITING FOR?
Verified purchase
This is such an awesome concert,its so well done that I know Freddie is watching. His mother is there to rooting this marvelous band on as Freddie would have wanted,honestly, you can't go wrong with Paul Rodger's of Bad.Co's add. He too has his own very rich voice that people love hearing. This concert is a, "win win."
The whole feel of this concert says one thing..."THE SHOW MUST GO ON!"
"Well done them."
"ROCK ON"

Mark FyfeReviewed in the United States on July 14, 2022
5.0 out of 5 stars
GREAT TRADE ARRIVED AHEAD OF PREDICTED TIME
Verified purchase
Great concert Paul Rogers in fine form.
Dvd was awesome

LI TechieReviewed in the United States on October 20, 2005
5.0 out of 5 stars
A must have for Queen Fans!
Verified purchase
I might never have even looked at this video if not for my older daughter, who wasn't even born when Queen was at their height. She watched some of my old videos that I recorded in the '80s and was fascinated (as are others of her generation, it seems) by some of Queen's videos and each of the band members. So when Queen+Paul Rodgers came to the Jersey Meadowlands just this last Sunday I took her to her first Rock Concert! It wasn't something I was anxious to do. I watched Queen's rise and was frankly bummed out when Freddie died of AIDS. As talented as the other band members are, what would Queen be without Freddie?

Well, I figured this might be her last chance to see what was left of Queen live so we went. Was I ever surprised. To answer the most obvious question, Paul Rodgers is not Freddie Mercury, but to his credit, he IS a major talent and he doesn't try to be a substitute Freddie. His performance recalls how the master did it, but doesn't overdo it.

In fairness this should have been called "Half of Queen and Paul Rodgers," but the production (the Concert I saw AND this DVD) is masterfully conceived and arranged. It is a fine touch that they don't try to give us a sentimental retrospective but a lively performance strengthened by long time backup performers. Brian and Roger sing lead on several songs and give us a good dose of what they do best on drum and guitar. Paul Rodgers performs some of his '60s hits, including "All Right Now" which was fabulous with Queen as the band backing it up.

Of special note was the performance of "Hammer to Fall." If you ever doubted what the song was really about (no, it's not nuclear war) the way Brian May (who wrote it) performs the first half, as a slow ballad on acoustic guitar, brings the message home in a very affecting manner. Then Paul Rodgers comes in as lead, and the band breaks into the power of the hard rock version we are more familiar with. A powerful performance.

So, if you buy this as nostalgia, so be it. But a lot of the audience was too young to be nostalgic about Queen; they were there for the music, the performance, the energy. This is not Memory Lane; it is the work of a band that is full of life and talent. The production values of the live performance are well reflected in this video. A must MUST-have for Queen fans ... and those who will be.
68 people found this helpful

moviemusicbuffReviewed in the United States on December 9, 2005
4.0 out of 5 stars
Very good show / Bad Company meets Queen
Verified purchase
It was very interesting that Queen would choose to team up with Paul Rodgers, since his vocal style and range are so different from Freddie Mercury. I agree with reviewers that Rodgers wisely chose to bring his own blues-rock style to Queen songs rather than to parody Mercury. However, on certain songs Rodgers has to strain to hit the high notes which Mercury does with ease. I really missed Freddie on those songs where he belts out the high notes.

The standout tracks were the Bad Company /Free songs ("Can't Get Enough", "Feel Like Makin' Love," and "All Right Now"); Rodgers is clearly in his element and Brian May & Queen do a great job of session playing. The guitar solos are right on and stick very closely to the studio-recorded versions by Bad Company and Free.

Among the Queen songs, the ones that stood out were "Hammer to Fall" (where Brian May plays and sings with acoustic star before turning to his electric guitar), "Tie Your Mother Down" and "Crazy Little Thing Called Love".

I liked the songs where May and Rodgers were the main singers. I didn't like the ones where Taylor sings as much ("Radio GaGa", "These Are the Days of Our Lives") because frankly speaking, Taylor should stick to drummming rather than singing.

The only song I didn't like was "Bohemian Rhapsody" where they played a video of Freddie Mercury singing for 4 minutes straight. I wouldn't pay big bucks to see a video of Freddie singing the song if I were the audience. Why didn't the band let Rodgers sing the song instead? It felt weird to have the video for most of the song and then to have Rodgers pick it up after the climactic guitar solo.

The bonus track "Imagine" was very well-done, with Brian May, Roger Taylor, and Paul Rodgers taking turns to sing the verses.

If you like Bad Company and Queen, this is the perfect blend of both bands! If you're a fan of Brian May and great guitar-playing, you got to get this DVD because his playing is just awesome throughout! The sound and picture quality are superb.
14 people found this helpful

BinBReviewed in the United States on March 24, 2006
5.0 out of 5 stars
The return of 70's bomb bast
Verified purchase
These guys bashing the band don't know Jack or Shizit, and Jack just left town. Yes Freddie is gone, but with Paul Rodgers, you just can't stop the rock. He gets up there and raises the roof with the band playing tight behind him. Yes, Roger Taylor has a weak singing voice but the guy sings it from heart and you can tell just by listening and watching him on stage that he really means it. I'd give him a C- on singing ability, but overall an A+++ for effort, honesty, and showmanship. I don't even own any Queen albums but for some reason I bought tickets to see their Buffalo show on 3-17-06 based on 4 or 5 tracks they played off the CD version of this DVD on local radio -it sounded good enough for me to blow $100 on concert tickets. Let me tell you, they tore the joint up that night. It was a massive 2 & 1/2 hour show that brought the house down. People were standing the whole time, singing, clapping, and dancing to their first Queen show in the Buff in 24 years. They did "Under Pressure" for the first time that night as well. The whole place was screeming and pounding on their seats before they came out for 3 enchors. This DVD captures that general feel with a good sound balance between the music and the crowd. Right after the show I went out the next day and ordered the CD & DVD. They do it old school stlye like all the bands used to back in the day. Queen will rock you.
4 people found this helpful

R. WoodsReviewed in the United States on March 23, 2010
4.0 out of 5 stars
Paul Rodgers champions Queen's return
Verified purchase
For die-hard 'Freddy IS Queen-nobody can replace him fanatics,' skip this dvd. All you'll do by watching is further cement your view that there is no Queen without Freddy Mercury. For most Queen fans, though, the return of the band after a long absence was welcomed; and Roger Taylor and Brian May do not disappoint. This was an energetic, lively, passionate display by the two along with new frontman Paul Rodgers. From the opening chords of Reaching Out to the chill-producing performance of Show Must Go On, Paul proved why he was definitely the right choice to lead Queen back to the stage. Infusing Queen's hits with his soulful sound and flawless vocals, the band sounded fresh and spot on. My only complaint would be there was too much indulgence in Queen's lesser hit songs, particularly I'm in Love with my Car, Love of my Life, Last Horizon and Radio Ga Ga, (which I know was a hit but can't understand why). I would have preferred the band exploring more of Paul's catalog. Their versions of Feel Like Making Love and Wishing Well are the two best of I've ever heard. All in all, though it's a great concert and an opportunity for those unfamiliar with Paul Rodger's career to see the best rock singer alive work his magic.
7 people found this helpful

William CookReviewed in the United States on October 9, 2020
5.0 out of 5 stars
Surprisingly brilliant
Verified purchase
Odd combination to imagine but breathtaking performances and heartfelt tribute to the late Freddy .... no butchering just pure magic
See all reviews
Back to top
Get to Know Us
Make Money with Us
Amazon Payment Products
Let Us Help You
EnglishChoose a language for shopping. United StatesChoose a country/region for shopping.
© 1996-2022, Amazon.com, Inc. or its affiliates