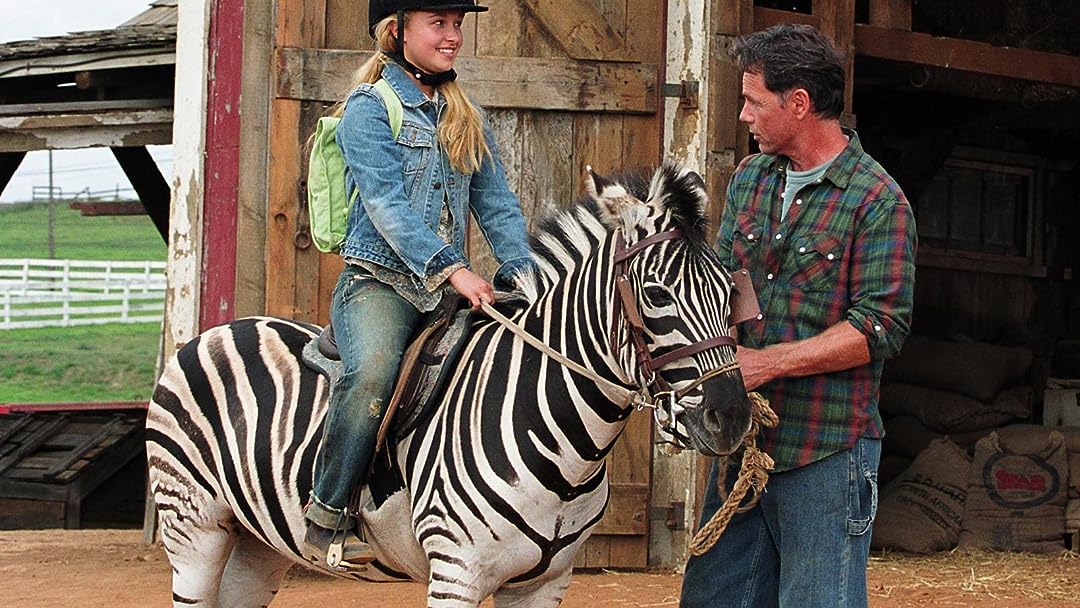 (2,953)
1 h 41 min2005X-RayPG
Stripes, a zebra raised on a farm in Kentucky, dreams of one day becoming a championship racehorse in this heartwarming and hysterical.

Ingrid RReviewed in the United States on March 30, 2020
5.0 out of 5 stars
Great movie for the kiddos!
Verified purchase
I allowed my 4th graders to watch this movie as a treat and they thoroughly enjoyed it!
They even collectively cheered for Stripes at the end. We had discussion about doing the "right" things and how helping others can help you! There are a lot of character building discussion learning points throughout the movie. It's entertaining learning! A couple of bad words, but nothing really major!
5 people found this helpful

lmrga4281Reviewed in the United States on December 14, 2019
5.0 out of 5 stars
Love this movie! Great for the whole family!
Verified purchase
I bought the digital version on this movie while vacationing with my 10 year old daughter. It was her first time seeing it. She loved it. And even as an (almost) 40 year old, it's one of my favorite movies. Great family fun!
5 people found this helpful

mike maguireReviewed in the United States on July 31, 2022
5.0 out of 5 stars
Family Oriented Movie
Verified purchase
Really liked the premise of the movie. Fun watching my dog get excited when the zebra was running on the screen!

Amazon CustomerReviewed in the United States on March 12, 2012
5.0 out of 5 stars
GREAT movie parents & kids will love!!!
Verified purchase
My two year old daughter (now almost three) absolutely LOVED this movie. Thankfully it was her favorite as I love it as well. There are some aspects that are adult humor to a degree, nothing that I found offensive (like references to a jailbird). We now have a growing herd of zebras of all kinds and after a year of watching this movie I have to say it is still a family movie that I truly enjoy. I am not sure why this movie isn't more well known it's a GREAT!
Go Stripes Go!

**Great for the whole family**

C. H. MitchellReviewed in the United States on February 28, 2010
5.0 out of 5 stars
Stripes - a Great Movie
Verified purchase
A story about a lost zebra being raised by a legendary race horse trainer (Nolan Walsh) and his daughter (Channing) following some years after a racetrack accident causing the death of her mother and drove Nolan into retirement. But the zebra had a love for running and a high volt competitive heart. The other figures are a Shetland pony (Tucker, a goat (Fran), a Pelican (goose) a rooster (Reggie), 2 flies, (Buzz and Scuz), and Stripes' love interest horse,Sandy. There are also a host of other characters. Special effects were great as each animal was trained to do the things that were needed for the movie and with computer technology caused the screen images of the animals to appear to really talk. The work here was simply without equal. The plot centers on bringing the trainer (and Tucker)out of retirement to train Stripes for the Kentucky Open, a race for the best of the best. Dalrymple Stables had dominated the race for some time while Walsh was the trainer there. The animals seeing that Channing also loved to race saw that Nolan's fear of training horses after the accident extended to fear of letting Channing grow up. They set out to and did succeed in jarring Nolan into snapping out of it - and so the training of Stripes began to prepare him for the Kentucky Open as a challenger to the prohibitively favored Dalrymple entry, Trenton's Pride. Race day has some consisitency issues. Huge race but WalMArt parking lot set. The broadcasting voices were too hard to hear and reporters missed the bigger story - Nolan Walsh, ex-Dalrymple Trainer, out of retirement to train a ZEBRA to be ridden against Nolan's ex-employer, Dalrymple, by Channing Walsh, daughter of the trainer and also daughter of a champion female jockey of note. This latter connection was missed ENTIRELY by the background audio broadcast reporters (it would NEVER be missed). Stripes wins the big race, beating Pride, and they become friends. Sir Trenton, Pride's father and the villain of the movie, had kept them from a decent relationaship that you sense both Stripes and Pride wanted. Lots more to this movie and it is chock full of very good character lessons. For example, None of the Trenton line of champions had ever bothered to thank Tucker for helping to train them. Stripes in a moving moment broke from the winner's circle and humbly shrugged the collar of roses that was given to him onto Tuckers's shoulders and he was then took Tucker into the winner's circle with him. The human actors were all brilliant and the great actresses of today had better watch out for Hayden Pannetiere who was stunning. I am not a big Whoopie Goldberg fan but as Fran she was absolutely amazing. Same can be said of Dustin Hoffman who was well-matched to Whoopi. One of the few top family movies ever. Its complexity and quality surprised me as much as the more violent Kevin Costner's The Bodyguard. I bought several of each from Amazon. Stripes is the movie of champions!

Goody Two ShoesReviewed in the United States on May 24, 2016
5.0 out of 5 stars
filled with adorable animals and some rather high-profile celebrity voices
Verified purchase
This very entertaining movie is hilarious, filled with adorable animals and some rather high-profile celebrity voices. I especially liked Mandy Moore as the very beautiful Sandy, who is listed as a Lipizzan mare on Wikipedia, but I knew that horse was an Arabian from the get-go. In fact, I found later that Sandy was played by an Arabian gelding. I expected this movie to be dull and straightforward, but there were plenty of plot twists to keep it intriguing. As a professional horseman, I know that the Jockey Club would never allow a zebra in a Thoroughbred race, but they certainly did it in the movies!
3 people found this helpful

HTDMikeReviewed in the United States on October 20, 2016
5.0 out of 5 stars
Great Movie to watch with your young kids and grand kids.
Verified purchase
My GrandDaughter ALWAYS requests that she and I watch Racing Stripes (that started when she was about 6... She's now 9 and still wants to watch it over and over, even after about 8-9 showings) I finally realized I might as well just buy it..
This is a really, really cute, fun, happy movie. Great for kids of any age (and adults.) Highly recommended.
2 people found this helpful

GramaReviewed in the United States on September 17, 2013
5.0 out of 5 stars
it was believable.
Verified purchase
and the silly jokes went over some of my grandkids heads. The younger ones (5 to 8) got bored with it half way through,so we played Go Fish and left it on. Then it picked up and they were okay with watching it again. They didn't question the animals talking at all. I asked if they thought their Aunt and Uncles steers talked in the pasture and barn and they thought so. That God would want them to understand each other too. I agreed. Cute movie. Great price.
One person found this helpful
See all reviews
Back to top
Get to Know Us
Make Money with Us
Amazon Payment Products
Let Us Help You
EnglishChoose a language for shopping. United StatesChoose a country/region for shopping.
© 1996-2022, Amazon.com, Inc. or its affiliates