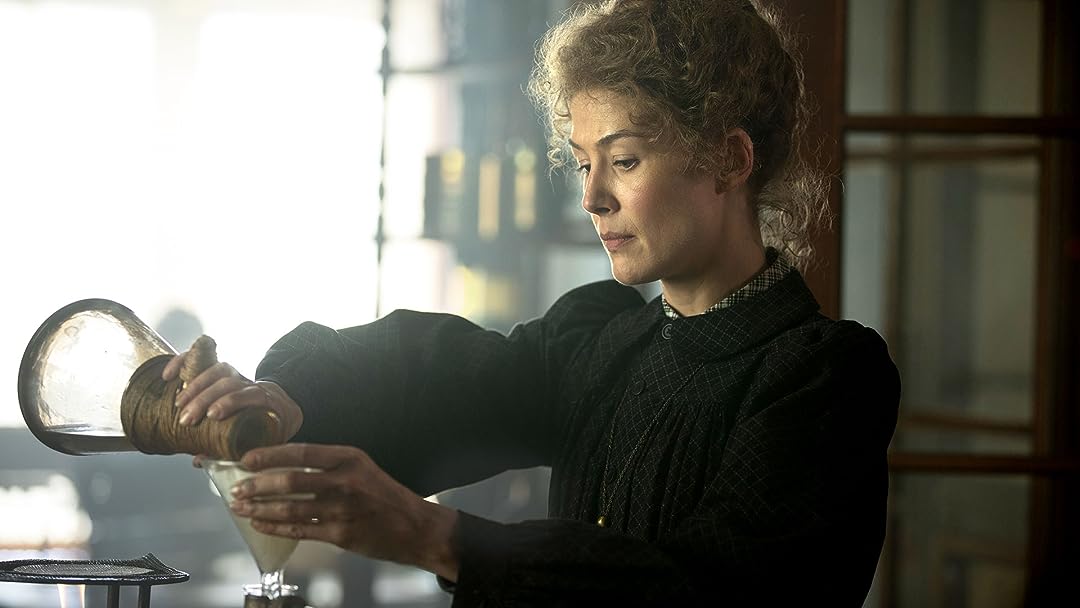 SheriReviewed in the United States on July 24, 2020
2.0 out of 5 stars
I really wanted to love this movie but....
Verified purchase
This movie is just...bad. It skims through her life without going into any depth. It randomly jumps through time to events later in the century dealing with uses of radioactivity but they are tiny snapshots of unrelated things. It completely ruins the flow of the movie. I suppose they were going for an artsy type of theme to go along with the emerging art and sciences of the turn of the century but it fails completely.

Oh LORD! And don't get me started on the way Marie is portrayed....she comes across as a selfish, neurotic nutcase. I'm insulted for her memory. I couldn't finish watching this train wreck. I can't say how disappointed I am in this movie.

CeleryReviewed in the United States on July 25, 2020
1.0 out of 5 stars
Do not waste your time
Verified purchase
I would recommend going into the mindset of watching “Radioactive” knowing they took extreme artistic liberty with depicting Marie Curie & it feels like it was a student film.

The pacing is too rapid, it focuses inaccurately on her personal/emotional life, her whirlwind romance leading up to her marriage more than her work, has NOTHING of how she became a scientist & the ONLY flashbacks from her before the age of ~25 drive home an odd point about why she hates hospitals. And the (mostly hugely destructive and cinematic) atomic effects of her work, with time jumps in often very nonsensical and abrupt sequence. The scenes are artistically pretty, but the creators depict Marie Curie as an argumentative, irrational, over emotional, jealous, hallucinating, stubborn shrew and I’m really unhappy with how it was done.

You would think that no only the first woman to win a Nobel Prize, but TWO of them, would be a movie of great fascination to everyone, but you would be wrong. It does not communicate those simple facts, and changes the narrative of her life in a disingenuous way, and you can’t even show it to children because of the nudity and sexual content. The salient points of her life don’t even become evident till the last quarter of the movie, and the director appears to blame her for things like the Chernobyl accident, the bombing of Hiroshima, and even when it showed only one positive impact from the dramatic flash forwards used for radiology in the 50s, which even that was depicted in a creepy, sinister, and uncertain science. I do not recommend this.
424 people found this helpful

roseReviewed in the United States on July 24, 2020
3.0 out of 5 stars
where is einstein?
Verified purchase
I did not like the flash backs to atom bomb ..Did the writers believe that they had to add more dramatic effect to this movie for it to be good ? I realize part of her contribution to the bomb is true but einstein had more of a pivotal roll in the bomb development ...they (the writers) should have played up how harmless this radium was thought at the time and how evidence even then was ignored.
216 people found this helpful

BjReviewed in the United States on July 25, 2020
1.0 out of 5 stars
Trash
Verified purchase
If you want to see a class, apolitical, and worthwhile movie about Madam Curie, watch "Madam Curie" with Greer Garson and Walter Pidgeon. Then you will know what she - and her husband went through in their lives. This Amazon original is skewed.
162 people found this helpful

david cReviewed in the United States on July 24, 2020
5.0 out of 5 stars
A historic piece that is so very important to watch
Verified purchase
Radiation had a beginning and and a hopeful reason for its use. Madame Curie , the focus of this film has been one of the most important Scientists in history. Only mankind has found dire uses for her discovery. This is a picture of her life both personal and professional. Women did not have much of a chance of a professional career during this time period, so, as this film will show you, her many successes and her fight to get to these incredible findings as a woman, wife, mother and scientist
121 people found this helpful

Science-Minded Multiple Chemical Sensitivities SuffererReviewed in the United States on July 24, 2020
4.0 out of 5 stars
A balanced, although sometimes poorly-executed, look at a strong female hero of science
Verified purchase
Overall, a pleasing film with a strong, but human female lead. At times, a bit too melodramatic -- although I don't suppose the average audience-member could be expected to become emotionally invested in the technicalities of radiation or the daily grind of doing science. Sometimes the choices of shots -- focusing on shoes, or confusing sequences of light and color -- felt like distractions from the narrative, but at times they did evoke some of the strange, eerie wonder of radioactivity and its effects.

Marie is very well-played by Rosamund Pike, but I felt the rest of the cast a bit subpar, and they seemed unnatural, possibly because of the "period" aspect. It was, at many times, difficult to believe in the periodicity of the characters besides Mdme. Curie, and many of them felt like caricatures -- the suggestions of stodgy old scientists or helpful lab assistants, little more than three-piece suits and false facial hair, expressing a single emotional note, rather than people. Other period elements -- the glow of gaslamps, the industrial grime of turn-of-the-20th-century Paris, the sooty beakers, the attire -- were atmospherically appropriate and gave a decent sense of time and place.

Though I'm not very familiar with the relationship between Pierre and Marie, and may be a bit cynical here, I found it unlikely that Pierre was quite so doting, in awe, and supportive of Marie and her work. Yes, they did work together, and yes, he did share the Nobel Prize with her, when he could have refused and insisted she retire to be a housewife. But marriages in this time were predominantly practical matters, and Pierre's eagerness to accommodate and encourage Marie feels, in this film, more of a modern fantasy of gender parity than a representation of fact. Even if that was their true dynamic, it feels out of step with Marie's personality, the colleague-like nature of their situation, and the time and place, so could have used more deliberate development.

Despite these issues, the film, overall, treated Marie Curie with respect, yet avoided placing her on a pedestal. She is portrayed, at times, as curt, rude, flippant, cold, unreasonable, an unrepentant adulteress, and not a particularly good mother. It is also heavily implied that she may bear part of the blame for the destructive applications of her work -- debatable, but certainly there is ambiguity about the "net good" her scientific legacy may have caused. She is also vulnerable to grief and pain -- and yet, despite these human frailties, she remains an intellectual powerhouse, determined in her work (and it clearly is work, and clearly requires determination -- it is no walk in the park) and conducting herself with dignity under hostile conditions.

Overall, the film manages a balance between admitting the humanity of Marie Curie while exalting her for her intellect, her hard work, and her perseverance as a woman in a time of significant sexism. It manages to inspire without being insipid, and is fine to look at, to boot. Not a bad way to spend a couple hours, especially for the uncommon chance to see such a strong, capable woman at work. Earnest reminders of such women are rare, but good for the soul. Not an excellent film, but a pretty good one.
115 people found this helpful

LizReviewed in the United States on July 25, 2020
1.0 out of 5 stars
Big disappointment
Verified purchase
I love strong,intelligent women and had high hopes for this movie. Don't waste your time. There was so much content in Marie Curie's life to cover and yet the film spent time flashing forward essentially blaming the decision to bomb Hiroshima and the melt down at Chernobyl at her feet. Had the writers stuck to her life I might have enjoyed it. One thing I found bothersome was she was supposed to be Polish and spoke English with a British accent while living in Paris. Made no sense at all!
116 people found this helpful

A. Ray MillerReviewed in the United States on July 26, 2020
1.0 out of 5 stars
Pick a different movie if you want to learn the amazing story of this science pioneer
Verified purchase
Telling the story of Madame Curie and what she did is valuable. She was a great scientist, and a wonderful pioneer. Her story, and the challenges she faced as researcher, and as a woman of that era, deserves to be told.

But not in this movie.

First, she comes off as a neurotic narcissist. Second, the movie implies that without her pioneering discoveries in radiation, things like the atomic bomb and Chernobyl would not have happened. Seriously? Do the screenwriters and producers really think that science doesn't march on, that others wouldn't have made the same breakthroughs, that the future could have been stopped? Third, in relation to the atomic bomb, I also didn't like the very overt association of Hiroshima with "crimes". That conventional bombing of Tokyo killed far more people than Hiroshima or Nagasaki, and that the two bombs ensured a swift end of killing on both sides, was completely overlooked. Of course... Fourth, Marie's interactions with her husband following their joint Nobel Prize, as portrayed in the movie, was nonsensical. In the movie she argued with him about his alleged theft of her glory. Yet the movie pointed out, correctly, that it was Pierre who successfully argued that she be included on the Nobel Prize, despite significant opposition from others. On what basis then, would she have argued with her husband? Answer: it wouldn't have logically happened, and the movie just made it up. Finally, and least importantly, from a stylistic perspective it was just weird with the artsy fartsy stuff. Unnecessary, boring, and distracting.
73 people found this helpful
See all reviews
Back to top
Get to Know Us
Make Money with Us
Amazon Payment Products
Let Us Help You
EnglishChoose a language for shopping. United StatesChoose a country/region for shopping.
© 1996-2022, Amazon.com, Inc. or its affiliates