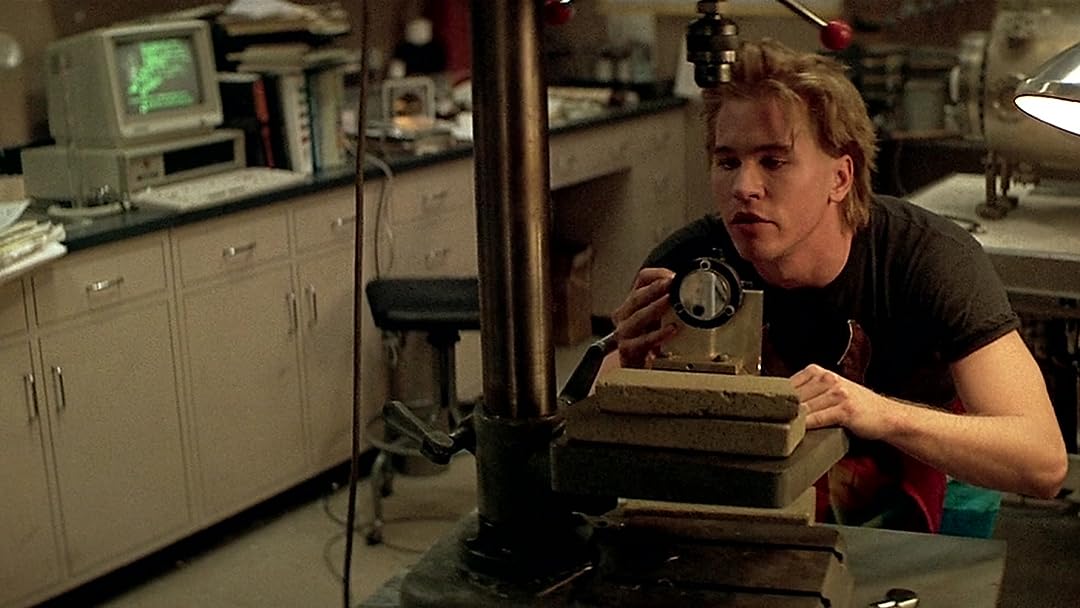 (3,380)
7.01 h 45 min1985X-RayPG
Whiz-kids (Val Kilmer and Gabe Jarrett) plot their revenge on a think tank that has them working onsecret weapons for the military.

Dr. PaulReviewed in the United States on August 6, 2020
5.0 out of 5 stars
Cult classic and among personal favorites
Verified purchase
I game to Real Genius years ago as a recommendation and instantly fell in love. It’s a fun movie, a great date night film, and one I’ve watched many times. Val Kilmer in one of his most fun, best films - classic. Okay, so it’s not rocket science (pun intended), but it’s a great way to spend time and enjoy a movie. No spoilers - why ruin in - but grab some pop corn, someone you like, and just have fun. Watch as this quirky band of smart people take on the evil professor (the ever great William Atherton) and military. Great 80s music only adds to it. Yep, a GenX classic.
3 people found this helpful

alanawritesReviewed in the United States on September 13, 2016
5.0 out of 5 stars
Smart People ON ICE!
Verified purchase
Funny, fun, bouncy, endearing characters, the general hotness of Val Kilmer in bunny slippers, some great lines. A pointed commentary on the legality of covert government weapons spending. Lasers. Student beauticians. Inevitable betrayal. A caper. A very cute romance. And a creepy guy living in the basement.

It is fair to say this is the best popcorn movie ever made.

I would be delighted to buy this again if they did commentary and extras.

Even more so if they made a sequel with the same actors 25 years later. Because things have just gotten that much worse.

R. RobertsReviewed in the United States on December 13, 2016
5.0 out of 5 stars
One of my favorite 80's films
Verified purchase
One of my favorite 80's films. Great combination of humor, soundtrack, and creativity. It's like a more serious version of Weird Science, or like if the characters of that movie went on to college. However I do find the content and message in this movie to be more important. Information = destruction. Use knowledge to do good like creating a house-sized popcorn making apparatus. Val Kilmer is very funny and so cute!
12 people found this helpful

Monkey BingoReviewed in the United States on April 30, 2020
4.0 out of 5 stars
World Building!
Verified purchase
The pacing is quite quirky and not much actually happens, but this is one of those movies that just works. One thing I noticed on the last viewing is the world building aspect. Its on par with something like Harry Potter. In fact, I wouldn't be surprised if a little seed of this movie spawned that entire series... secret school within a school, the students basically have magic powers (genius levels science skills), there's a villain who seems like a good guy in the beginning.... anyway, worth a rewatch on a lazy Sunday afternoon.
One person found this helpful

John BlackReviewed in the United States on June 7, 2015
4.0 out of 5 stars
Another teen nerd movie from the 80's, but more fun that the average.
Verified purchase
This nerd movie is not just about nerds getting picked on, then getting revenge. During most of the movie the nerds are, for the most part, having fun. There is a nice balancing of an overall fun atmosphere in the dorm and in the school with plenty of one-liners in the dialogue, while other parts of the humor are more subtle with a hint of mystery.

The character development is fairly good, even though the characters themselves are strange. The main conflict for Mitch (the 15-year-old genius) is a struggle between concentrating on his school work, and loosing up and having fun. There is nothing realistic about this school, nor does the movie try to make it seem realistic, it is just fantasy fun.

It is not until near the end of the movie that these geniuses even realize that they are being exploited, therefore the revenge is quick and to the point, but still funny.
9 people found this helpful

PyrielReviewed in the United States on August 28, 2020
5.0 out of 5 stars
Must watch with some popcorn
Verified purchase
Obsessed with this film. I remember having the joy of seeing this movie at a screening when I was a kid. Loved it then and still do to this day. Val Kilmer is gorgeous and hilarious. Not only is the movie fun to watch but the soundtrack is a gem of happy 80s nostalgia.
One person found this helpful

Joe BanksReviewed in the United States on June 11, 2006
4.0 out of 5 stars
Revenge of the Techno Geeks
Verified purchase
Real Genius is one of my favorite 80s films. If for no other reason than the fast-paced story, razor sharp one-liners, and brilliant pranks. For example, the revenge visited on Dr. Hathaway at the end is perhaps the most perfect in comedy history (even better than the Animal House finale). Real Genius deftly pulls off what few films have managed to do--it makes it cool to be a techno geek. Revenge of the Nerds attempted the same thing, but its approach was much more ham-handed. The characters are well done, especially Dr. Hathaway, Chris Knight (Val Kilmer at his best), Kent, and a surpringly hot Jordan (played by the hyperkinetic Michelle Meyrink). The dialog is also top notch, even for the minor characters (Dr. H- "I noticed your stuttering has improved, Brody.". B- "I've been giving myself shock treatments.", Dr. H - "Up the voltage."). As an extra bonus, it features a memorable mid-80s soundtrack too.

Despite all that, I subtracted one star for the film's ending, which is totally divorced from reality. Lets face it--there is nothing wrong or illegal with using science to build weapons--it happens all the time. In real-life, the aftermath of these events would have resulted in Chris, Mitch, and Jordan going to Federal Prison (for sabatoging a multi-million $$ DOD test), Kent going blind (his retinas surely burned out from staring directly at the laser beam), and Dr. Hathaway suing the Air Force for professional and personal damages (the test would have gone fine if base security wasn't so shoddy). Oh yeah, and Brody gets the Darlington job by default.
5 people found this helpful

Only-A-ChildReviewed in the United States on November 29, 2005
4.0 out of 5 stars
Jiffy Pop
Verified purchase
The imagination and quality of Hollywood movies in the early and mid 80's had regressed back to the pre "Bonnie and Clyde" days (the early and mid-60's being the worst ever period of American movie-making).

Fortunately there were a few gems like "Real Genius" to sustain audiences. Any film that features a memorable moment like Deborah Foreman's articulation of her standards for a male companion, a memorable character like Michelle Meyrink's hyper-kinetic Jordon, and the memorable sight of a house exploding from the force of a giant Jiffy Pop container can never be forgotten.

And who doesn't feel good just watching the neighborhood kids play in a mountain of popcorn to the sound of Tears For Fears' "Everybody Wants To Rule The World".

Although "Real Genius" has not totally escaped the ravages of the past 20 years, it has held up reasonably well. Now it can even be appreciated as a sort of time capsule, demonstrating rather strikingly the complete computerization of the applied sciences that has occurred during the relatively short time period since its 1985 release. Other than Kent's incidental use of an early computer in his dorm room and a mostly decorative monitor in the lab, these now essential machines are essentially absent from this techno film. Amazing!

Then again, what do I know? I'm only a child.
8 people found this helpful
See all reviews
Back to top
Get to Know Us
Make Money with Us
Amazon Payment Products
Let Us Help You
EnglishChoose a language for shopping. United StatesChoose a country/region for shopping.
© 1996-2021, Amazon.com, Inc. or its affiliates