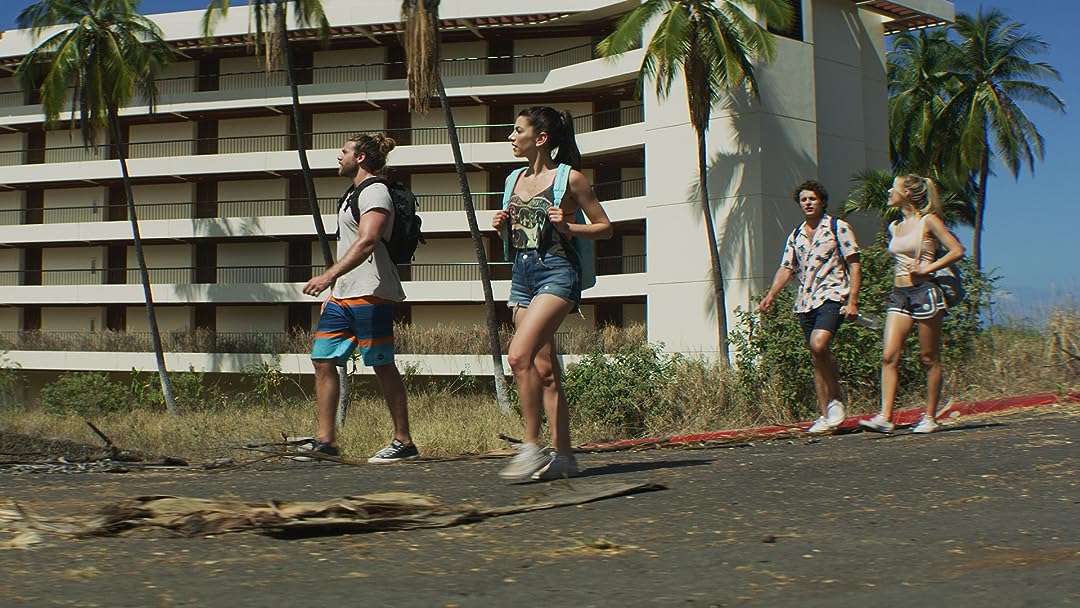 (1,396)
1 h 15 min202118+
Four friends head to Hawaii to investigate reports of a haunting at an abandoned resort. It's beautiful there, but they soon learn you have to be careful what you wish for.

EthanandstuffReviewed in the United States on May 8, 2021
1.0 out of 5 stars
This was a joke, right?
Verified purchase
Honestly, I kept waiting for one of it to go one of two ways:

1. It to go "cabin in the woods" where it cashed in on all the paint-by-numbers elements. Attractive people, well-trod set-up, haunted resort on an island. It didn't. The movie is 71 mins long and I think a person with quick typing skills could have written the plot and script in less than a day... probably way less

2. Have the smoking hot go topless, that didn't happen either.

Honestly, this movie is just lazy. For the 6.99 that I paid, I am actually glad I did because I learned that I need to be more discerning in my life, generally.

I've got a lot of work to do as a person, as evidenced by my selection to spend 71 mins of my fleeting existing on this film.

Rent it if you want but it's lacking. just plan lacking.

sean keenanReviewed in the United States on May 2, 2021
2.0 out of 5 stars
Pretty disapointing
Verified purchase
Telling us within the first 5 minutes who the only survivor is the fastest way to make your audience lose interest. Now granted most horror movies only have 1-2 people survive by the end, but we as the viewer don't know who. this straight up tells us. and it ruins the tension because we know who dies by the end.

The film is also really kinda poorly filmed, in a B-Movie type of way, but from the trailer, it loos decently well shot, so thats slightly false.

poster is pain but kind of cool, premise and monster are nice ideas, but the way it was executed was just so bad.
5 people found this helpful

CaliforniaReviewed in the United States on May 1, 2021
1.0 out of 5 stars
Terrible
Verified purchase
Look, both female actresses are extremely attractive which makes this horror 1 star. The effects are pretty descent I’ve seen worse, the plots okay not bad, but what matters most is the acting. It’s complete trash, I mean the dialogue, the “scared” looks and behavior, complete garbage, I’m not a critic (not a loser) but holy smokes for 7 bills you’d expect better than your grandfathered in Netflix subscription no ? I give this film two thumbs down.... No Mames
5 people found this helpful

LizbethReviewed in the United States on October 5, 2021
2.0 out of 5 stars
Not even so-bad-it's-good good
Verified purchase
This was a bad movie. Bad enough that even though I am supposed to be working on a chemistry lab right now, I took time out from working on it, to let you learn from my mistake. I actually bought it because I like to put on stuff in the background while I work. I regret this now. Though I suppose having something so banal it is genuinely completely unworthy of my attention, may help with my focus.

The concept seemed good and I thought it was actually a brilliant idea, using the shutdown of the tourist industry in 2020 to shoot at an "abandoned" resort in Hawaii. And the scenery is indeed beautiful. Of course it is, it's Hawaii! However, just throwing some old palm fronds on the driveway does not a spooky atmosphere make. Still, I'll give it a star for concept.

Unfortunately the framing device, having a survivor narrate the situation to a homicide detective, means you already know who survives. So no tension there. And while there are a few good makeup effects and special effects (one more star for you), there is nothing particularly scary about the ghost/haunting. Just a lot of people running around and screaming for the last third of the movie.

So, two stars total, but it's basically garbage. The acting is initially fine but oddly becomes wooden and unconvincing as the tension (theoretically) escalates. The characters are annoying enough that you are 100% okay with them dying (and they don't even die that interestingly). And the ghost story itself is not very interesting and TBH "haunted resort built on cursed indigenous land" is both cliché and pretty offensive. And the ending was just...so predictable. No original thoughts were had.

Here's an interesting tidbit though, Hawaii has an interstate highway. That doesn't really have anything to do with the movie, but I think it's an amusing fact.

mattReviewed in the United States on July 4, 2021
1.0 out of 5 stars
What a absolute disaster
Verified purchase
This movie had the chance to be awesome and it suuuuuucccckkkeddd. Holy crap was its a terrible movie. I was super excited and hoped the movie was going to be something thrilling and scary. Save your money. Like seriously...just don't even bother you'll waste a hour. Yeah. That's how long the movie is. A hour.....idk if they had a 2 day limit on filming or what but they probably spent most of the films budget on the scene with the helicopter. Please. If you value even 1 hour of your time please don't spend your money on this. Wait till it's free or something.
One person found this helpful

Amazon CustomerReviewed in the United States on May 13, 2021
1.0 out of 5 stars
I cannot believe I paid for this much less paid $6.99
Verified purchase
This was a terrible, terrible movie. The casting was good, and I do think the actors tried, but the direction, the lighting, the sound, the camera work ... so, so awful. There were some great aerial shots of Hawaii, and I enjoyed the premise, but the goofy dialog, the cliched characters and the failure to capture the full scope of what the actors were seeing all made this one of those crappy movies you might catch on tv in the middle of the night when you can't sleep ... and yeah, I'm old ... I remember middle-of-the-night tv when options were limited.
One person found this helpful

FerdyReviewed in the United States on May 14, 2021
1.0 out of 5 stars
Don't waste your money
Verified purchase
I paid for this rental and could not even get to the scary part because it's just so bad. The acting is terrible. The story is dumb. It is truly one of the worst movies I've ever tried to watch. If you still want to see it, wait a week or so and it will be free on Prime or greatly reduced. I don't think it's even worth watching for Free. Maybe if they paid me, I could finish it.
One person found this helpful

HReviewed in the United States on June 7, 2021
1.0 out of 5 stars
Don’t waste your money
Verified purchase
Do NOT waste your money, you’ve been warned. The acting is bad enough to make you turn this movie off after 5-10 minutes, but if you can suffer through the B-grade acting you’ll enjoy 1980s type cheap horror thriller special effects. The plot is thin and feels forced, the haunting is a joke as theres ZERO cause or reason and then they die. Dumbest movie I’ve seen in a while....
One person found this helpful
See all reviews
Back to top
Get to Know Us
Make Money with Us
Amazon Payment Products
Let Us Help You
EnglishChoose a language for shopping. United StatesChoose a country/region for shopping.
© 1996-2022, Amazon.com, Inc. or its affiliates