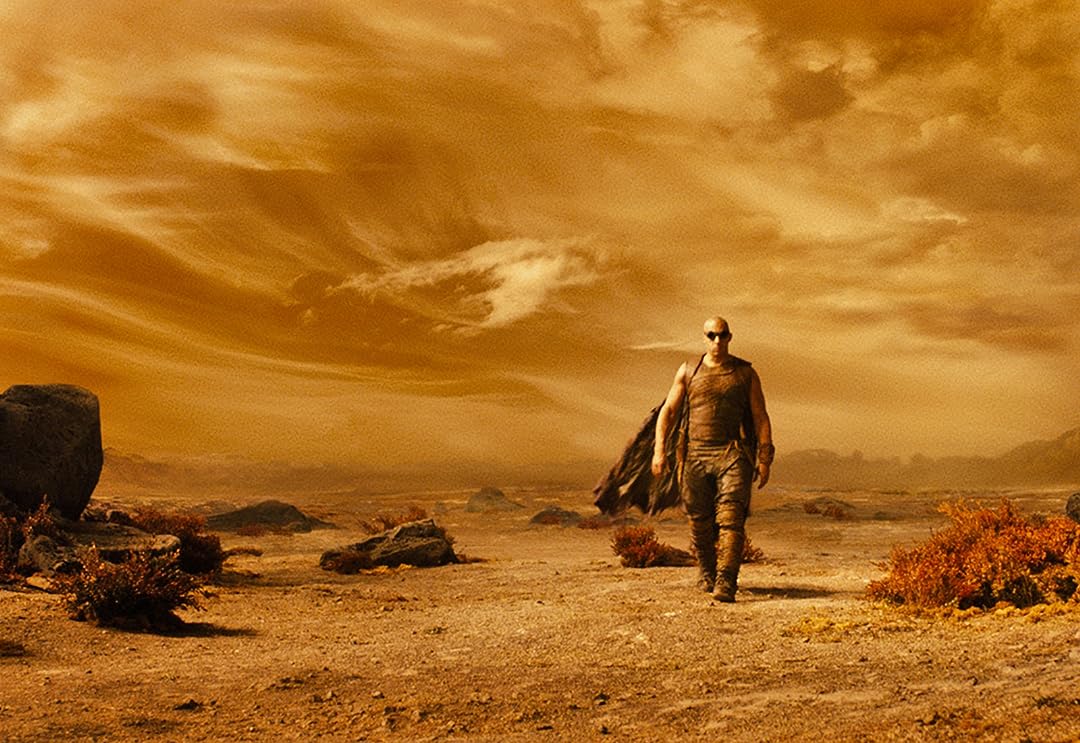 (10,844)
6.42 h 7 min2013X-Ray18+
Vin Diesel continues the action saga of the antihero Riddick, an escaped convict wanted by every bounty hunter in the galaxy. Experience the Unrated Director's Cut with an alternate ending!

cgwoolleyReviewed in the United States on August 28, 2018
4.0 out of 5 stars
Riddick
Verified purchase
This is Part III in the "Riddick Saga". The movie continues from where "The Chronicles of Riddick" left off. He is now the Lord Marshall of the Necromongers. He wants to find his home world of Furia. He ends up in a place ("not Furia"), and left for dead. He finds he must leave before the coming storm, and the creatures it will bring. He activates a distress beacon, that will bring the bounty hunters. This is where the action begins. I liked the two previous movies, along with this one. The movie had very few flaws, and stayed true to the idea of Riddick.
19 people found this helpful

Kelly HowardReviewed in the United States on August 17, 2017
4.0 out of 5 stars
Macho action brain candy of the fun flavor.
Verified purchase
Fun, park-your-brain action Riddick flick, tho with a number of elements that seem awfully familiar if you've seen Pitch Black.

I did really wonder if the props designer was making some sort of obscure inside joke, or ran out of money, or what, when I saw that the uber-groovy Space Jet Cycles had plain ole everyday English hunt seat saddles for seats. And I mean completely un-adorned hunt seat saddles, plain brown leather on black & chrome, jet-powered aerial motorcycles. It looked truly asinine. They matched the color scheme of the planet that Riddick is stranded on, so maybe they were going for an artistic color-scheme-thing a la "The Cook, The Thief, His Wife, & Her Lover". Nah, asinine.

But if you want to indulge in some Riddick, eat popcorn, & just wallow in brainless action, not a bad way to spend an evening. Don't look for much Karl Urban, tho: he shows up for all of about 45 seconds, despite showing up fairly prominently in the credits, which I found rather disappointing (having developed a huge crush on him from his Bones McCoy & "Almost Human" work).

TJ HallReviewed in the United States on August 26, 2021
5.0 out of 5 stars
much love
Verified purchase
Riddick movies are amazing to me. this one was a bit off topic for my liking since it was hardly a continuation of the series. but i 100% stand behind more of these movies being made as long as Vin keeps wanting to make them lol

i admit though Riddick being hurt all the time during this movie kinda made him seem not as hardcore awesome. i prefer knowing when Riddick is there. he will always come out on top no matter how hard the odd's. this one just nerfed him in a way i didnt vibe with.

cant wait for Furya to get done though! and i hope it wont be the last movie. if i was a billionaire i would fund this movie series with a passion lol

Todd M.Reviewed in the United States on June 13, 2021
1.0 out of 5 stars
I liked Pitch Black… but not this one.
Verified purchase
This is a CGI extravaganza with a terrible lighting issue and it just happens to have Vin in it. I don’t think he’s a particularly good actor which is perhaps why he’s in so many movies that are heavy on action and CGI to keep the viewer occupied. I really liked the first movie and harking back to it with this one just didn’t make much sense but the real problem was that it was boring and watching the special effects went thin early. Also, the coloring was annoying and at about the half way mark we started making our way to the exit. Not everyone can like everything so, obviously, opinions vary.
2 people found this helpful

bluesyReviewed in the United States on July 6, 2020
3.0 out of 5 stars
Director's Cut??
Verified purchase
I liked the movie when it came out that I purchased it on DVD - but my kids liked it as well so they took the DVD to their home. Sort of stuck in the house from the virus junk and it was raining, I thought it would be worth watching again, especially a Director's cut. Movie itself was as good as ever, but don't bother watching the Director's Cut. The only additional video is right at the end and really just sets the viewer up for a Riddick 3. Like no one saw that coming. Should have saved my money and had my kids mail my DVD back.
3 people found this helpful

MykeReviewed in the United States on December 21, 2015
4.0 out of 5 stars
Tough Freakin' Furian
Verified purchase
I love all the Riddick films. I think the concept and story line is interesting and fun. This film, being the 3rd in a trilogy of actual films in the theater, (the 2nd story was an animated short film; I don't even know if it ever aired or played in theaters - so actually there is a total of 4 stories/films all together) but like many sequels, Riddick isn't nearly as great as the first 2 movies were. Don't get me wrong, this is still a great film, but I think they may have waited to long in releasing it. I watched the bonus interview with Vin Diesel talking about the making of the film, and from what I understand, it was a matter of funding that keep this film, Riddick, from being made earlier. Nevertheless, this story has much of what is expected of the Riddick character in the story. Riddick is on an alien planet, hiding from bounty hunters, who are seeking him out to collect a large pay role (as well as Riddick's head in a box); lots of monstrous aliens (which of course Riddick beats up and kills on multiple occasions); cool space ships, lots of action, cool futuristic space motorcycles, good guys and bad guys. What more could you ask for from a Riddick film. But like I say, sequels sometimes loose that magic that they start out with. This is not necessarily the case here, but the film Riddick (in my humble opinion) does not compare to the first 2 "films" in a production or direction aspects. Thats not to say its not good. It is. But the first 2 films surpass it. If you like the previous Riddick films there's no doubt you'll enjoy this one. Its action packed and as usual Vin plays a wonderful portrayal of this Furian tough guy. I enjoyed it very much.
2 people found this helpful

Jamilia FairReviewed in the United States on December 2, 2021
5.0 out of 5 stars
Shocked Myself
Verified purchase
You know, back when this movie first came out, I did not like it, at all. I honestly felt that they could have done better and or that they should have left Riddick where he was. However, after watching it again, in 2021, I have come to find that I like it this time around. Riddick become more relatable. Not in the 'let's frighten and kill people' kind of way but in the 'he feels pain, wants more out of life and protects those who need and or deserve it' kind of way.

So, if you don't mind a more human-like Riddick, go ahead and watch it, but if you don't - I don't recommend it.

P.S. He does still kick butt.

Dr. OldsmobileReviewed in the United States on December 19, 2016
5.0 out of 5 stars
If You Liked Pitch Black, The Chronicles of Riddick you'll like this one.
Verified purchase
I'm prejudiced here. I really like Vin Diesel. So I liked this movie. It was different from all the rest I've seen. A little bit like Pitch Black, in that the native creatures are keyed to the planets events. A little taste of "The Necromancers" from The Chronicles of Riddick, gives us, the viewers, some insight as to why he's here on this God forsaken planet in the first place. It also leaves open an entire other story of revenge for Riddick. I liked how this was written into the script. Riddick also manages to make a pet out of one species of critter that lives on the planet. I found this part intriguing.
I liked the interacting between the head bounty hunter and Riddick in the end allowing him to leave the planet he's on. I liked this movie well enough that I bought it. If you are a hard core Riddick fan you won't want to miss this one. I recommend it with 5 stars +.
6 people found this helpful
See all reviews
Back to top
Get to Know Us
Make Money with Us
Amazon Payment Products
Let Us Help You
EnglishChoose a language for shopping. United StatesChoose a country/region for shopping.
© 1996-2021, Amazon.com, Inc. or its affiliates