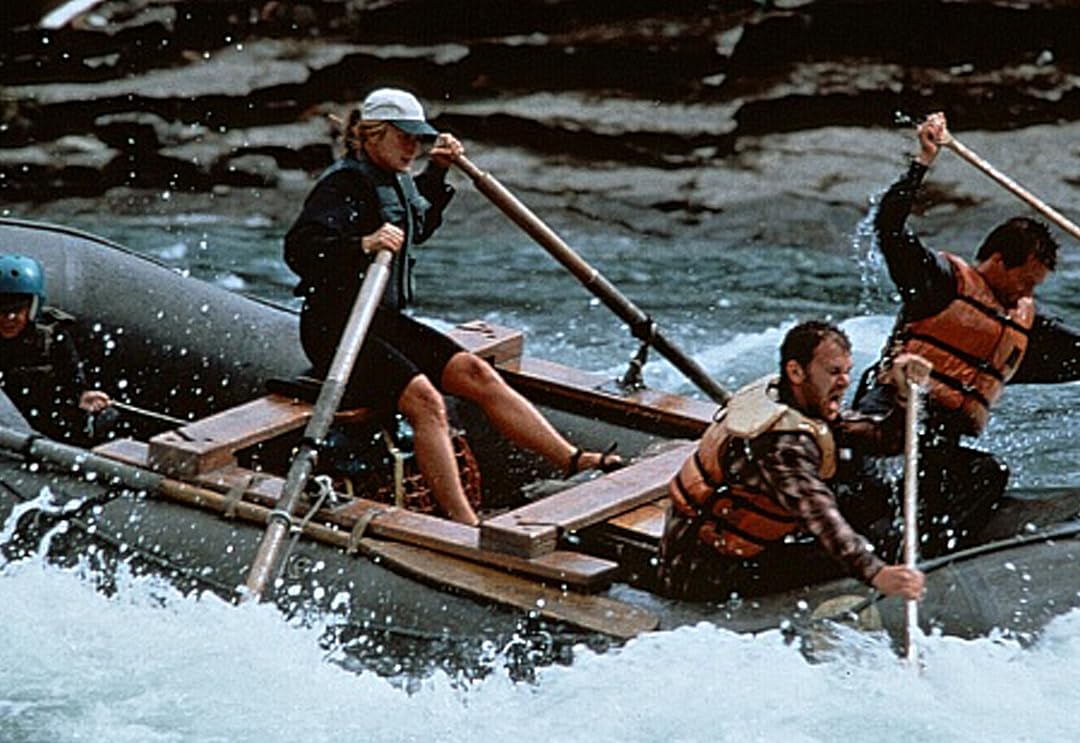 blaine bentonReviewed in the United States on June 30, 2021
4.0 out of 5 stars
Never heard of or seen this movie until very recently...
Verified purchase
Very good acting and suspense in the movie. The actor who played the little boy in the movie (Joseph Mazzello) always gives 110% effort to every acting performance, but this film is his finest performance, in my humble opinion. He should have been nominated for an Oscar for Best Supporting Actor. The part of movie where he says to one of the crooks "You killed my father?!" and then turns to his mother and cries was so real and genuine that I was haunted by it for days. Haunted my how emotionally moving that was. I knew right then that that was not Mazzello as an actor, but Mazzello as a real person.

Paul A. KlingerReviewed in the United States on September 10, 2014
5.0 out of 5 stars
One Of The Best Thrillers Of the 90's
Verified purchase
One of my top 10 of my personal top 250, I have watched this film about 20 times since 1995. What I enjoy most is how the film shows
how children worship what is "cool", as Joseph Mazzello's "Roarke" demonstrates early on in his adoration of Kevin Bacon's character,
and at the same time finds his father (David Strathairn) disappointing, since he is a workaholic and often fails to follow through on events
in his kids lives. But as a result of the rafting trip, he learns that sometimes the less exciting one is really the one who ultimately loves
him and risks his own life to save his family, when the chips are down. One reviewer on IMDB liked the film until Mazzello, at the end
of the film says to the ranger when asked about what his father did says resolutely' "He saved our lives!". Said reviewer thought this was
stupid in relation to the events of the film. In my view, this was the most emotional moment of the film, showing the important lesson he
learned about life from this experience. He went from shaming his father to respect, love, and understanding. Great literature as well as
great films show little cues early that may seem irrelevant, only to be explained or revisited late in the story to be extremely revealing.
Some reviewers look for flaws, which like most films, this may well have. But as an entertainment with tension and emotional power,
this movie is totally satisfying.

gtodanReviewed in the United States on August 30, 2021
5.0 out of 5 stars
This Movie is Incredible---We Love It!!!
Verified purchase
I can't think of a thing that I would berate in this movie. The story is gripping, tense, engaging. The cinematography is incredible with the river action scenes being so well filmed, I can't believe that Meryl Streep actually did most of her scenes. The acting is top notch. It is a must see, much better than you may expect.
One person found this helpful

C. A. LusterReviewed in the United States on June 14, 2016
5.0 out of 5 stars
The River Wild
Verified purchase
I have been a fan of Meryl Streep and Kevin Bacon for many years. So I expected a great movie. I wasn't disappointed, in fact it went beyond anything I could hope for in a river adventure film. Streep was amazingly vulnerable and courageous, and Bacon was cold and psychologically manipulative. This by far one of the best movies either has done and certainly one of my favorites. I love this type of movie anyway and I saw great directing, outstanding acting by Streep, Bacon, and the rest the cast, amazing locations, incredible camera work, and jaw dropping stunts. I highly recommend this movie. If you enjoyed this be sure to see [[ASIN:B001EBV0LW Deliverance (1972)]].

J@YD944Reviewed in the United States on April 25, 2014
5.0 out of 5 stars
The River Wild
Verified purchase
This movie started out to be a routine outdoor vacation trip but not far into the family adventure, things start going south for this not real close-knit husband/wife team with a young son along for the ride. Kevin Bacon's character suddenly changes from friendly to demonic as he takes control of the family's rafting trip down the raging white water river. The scenery is awesome. Meryl Streep is superb as the mom who gives new meaning to a protective mother as she tries to do whatever it takes to save her family from certain death at the hands of ruthless killers. If you like fast action adventure thrillers, I think you will enjoy this movie. I don't want to be a spoiler with too many details but I was surprised at the realistic performances on display in this movie.
5 people found this helpful

MAMA ALVAREZReviewed in the United States on October 17, 2013
4.0 out of 5 stars
Good predictable suspense film, entertaining, but nothing special
Verified purchase
Here is a film with Kevin Bacon, playing the bad guy again, which he's very good at it and the best actress of the century Meryl Streep. Well, she's trying to reconcile her marriage which is not going very well, so she got the gang together to go river rafting near her old parts of the woods, where she once worked as well, but hubby too busy working saying can't make it, but eventually finds the time to come as long as he can continue his job from his laptop. They hear in the news some bank robbery going on and police looking for 3 suspects and of course I think you can almost guess what and who is part of that act and then the film follows with a hostage situation from which Meryl's family tries to get out of and save their lives with the help of her husband whom finally realizes how important family is!. One of Meryl's earlier films but still entertaining.
One person found this helpful

G. BoneReviewed in the United States on June 25, 2021
5.0 out of 5 stars
Great acting & action
Verified purchase
I have always loved this movie. Meryl Streep is amazing and then you throw in Kevin Bacon and you can't go wrong. It's action packed and keeps you on the edge of your seat. Great performances and awesome action.

D'voReviewed in the United States on July 26, 2020
5.0 out of 5 stars
excellent thriller
Verified purchase
Meryl Streep is good in most things very good in this. she trys hard to protect her family from a crazy bank robber - Kevin Bacon by planning an escape down a dangerous river. the character interaction brings the story to life and offers the real suspense in the story.
good dvd picture.
See all reviews
Back to top
Get to Know Us
Make Money with Us
Amazon Payment Products
Let Us Help You
EnglishChoose a language for shopping. United StatesChoose a country/region for shopping.
© 1996-2021, Amazon.com, Inc. or its affiliates