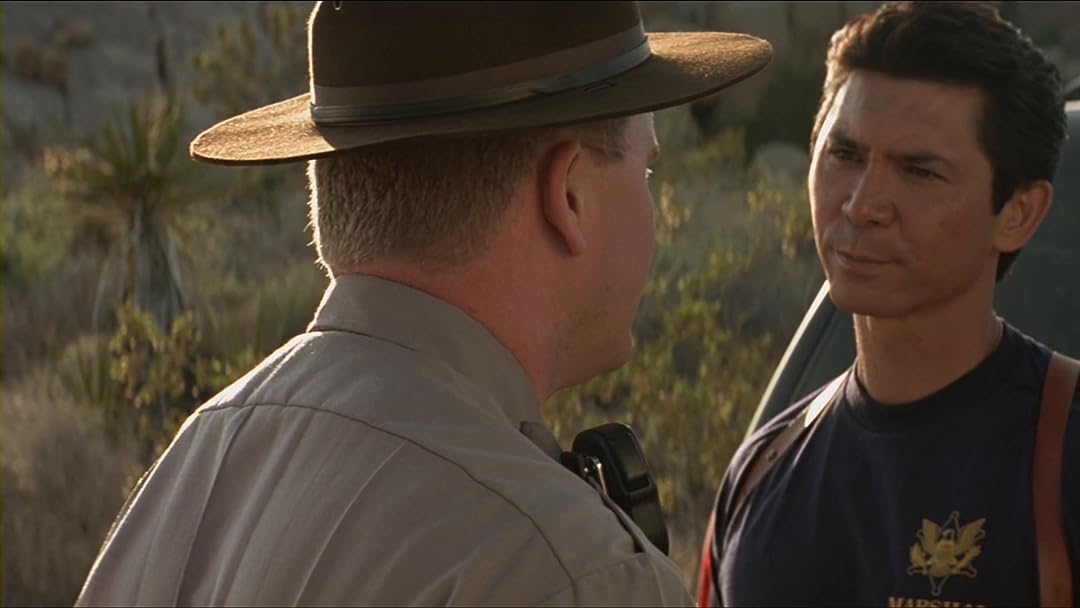 (523)
4.41 h 30 min2001X-RayR
When Special Agents Jack (Lou Diamond Phillips) and Stephanie (Lori Petty) cut through a condemned, desolate highway known as Route666 while tracking a suspect, they discover a danger far worse than deadly twists and turns! Years ago, a notorious chain gang was killed in a horrific roadside murder, and the highway still echoes with its brutal legacy.

BillReviewed in the United States on September 6, 2021
5.0 out of 5 stars
WHAT WAS THAT ALL ABOUT?
Verified purchase
Gotcha. I gave this a five star so that you would read this as a warning. Don't waste your time. This is really a bad movie and totally deserve a one star rating. I read some of the 4.5 reviews and decided to watch Route 666. A fan of both Lou Diamond Phillips and horror films, I decided to give it a go. Diamond, generally a B movie actor, well B+ anyway, was also the primary reason I decided to watch. Big mistake. Several of the actors were really over the top with their dialogue. Plus, their overacting made it really feel like the lowest of low budget films. If some actor studio wanted to show students what bad screen play, bad dialogue, and bad acting looks like, this film would then have some redeeming value.

About a little over halfway through the movie, I stopped the movie and decided to take a short break. Upon returning, I thought about skipping the rest but decided to finish it. Did it get better? Absolutely not. I should've gone with my reaction to skip it. It was a total dud.

Ice PlanetReviewed in the United States on September 29, 2021
1.0 out of 5 stars
Banal, written by a 4th grader for 13 year old boys with very low IQ's
Verified purchase
I saw the high star ratings and normally am ok with Lou Phillips.... but there absolution nothing as in ZERO redeeming or worthwhile about this celluloid and talent waste.

This is an Ultra lame "ghost" revenge movie with all the appeal of rancid vomit.

Acting, scenery ok; the story emulates the definition of lame and like the ugly, slow, inept, ineffectual and useless ghosts you wish it would disappear too and not come back..

You cant spoil this movies as it is totally predictable and uninspired. Hope this "spoils" it so you dont waste your time. 4 prisoners working the road get murdered by the sheriff and deputies. Moron marshals take a shortcut with a witness protection person to meet a court date. Ghosts take revenge , Phone booth in middle of desert seems to work for one call and local sheriff who doesnt pass on request for help to marshals office. Dull yes? To add to the stupidity of the story police and marshals shoot at ghosts and .... this will surprise you - the ghosts are not affected by bullets. BUT dont worry this keep shooting at them various times in the plop plot plot and nothing changes.

No slight to the actors who mostly did a good job of being stupid as required by the script. Hopefully this 1 min review has saved you an hour and half of your life. Washing dishes and mopping the floor will not only be more productive but more fun. The high stars indicate there is some system like product rating where fake reviews are paid for to deceive audiences seeking an honest evaluation.

Andrew "Big Ugly' HaleReviewed in the United States on October 25, 2020
3.0 out of 5 stars
Noir zombie chain gang? Eh why not.
Verified purchase
Zombie chain gang? Federal marshalls hauling a runaway? I like the concept. It's worth a watch and maybe a revisit a decade later, like I did. The production isn't bad although the shakey slow-mo camera scenes when the zombies show up grew daunting quickly. Now our actors aren't necessarily the best. They're likeable, especially Jack, Stephanie, and Rabbit. But they're also kind of whacky and extreme. I thought the zombie looks gave an old noir haunting look which was cool. Honestly, Lou Diamond Philips will always be that cool Chavez y Chavez friend that we route for from Young Guns.
4 people found this helpful

VinceReviewed in the United States on February 8, 2018
1.0 out of 5 stars
Save your time and move along. You're welcome for that advice.
Verified purchase
Not sure how the f--- this has 4.5 stars. Even for a low budget flick, the plot is full of more holes than the road crew zombies. Sure, it's a "vengeance from beyond" thing, but even suspending my disbelief, too many of the bits were so preposterous as to be more annoying than anything. Let's not start on the bad acting and poorly written dialogue. As we've heard every Irish cop on the planet say, "All right, everybody, move along. There's nothing to see here." You're welcome for my saving you 1.5 hours of your life so you can do something more constructive, like polish your dog.
13 people found this helpful

Jim TrentReviewed in the United States on October 7, 2020
3.0 out of 5 stars
More like a 3.5 but can't do halfs
Verified purchase
Or on a scale of 1-10, it is a 6. The acting was decent. Where things had issues was the editing and camera work. It was like a college production IMO. Right from the start, you could tell it was not good editing. In the bathroom, it kept going from having liquid on his face to his face looking dryer. The shootout outside the bar had a flash towards the front of the bar and you saw 2 people just standing around watching the shootout.

You definitely recognized a lot of the actors in this show, which is weird because they are not A-listers but they definitely had face recognition if not name recognition. In fact, I would say that 90% of the actors in this movie you would recognize as having been in a lot of movies you have watched. That being said you would have thought that they would have pointed out some of the bigger issues in editing. All in all, not a bad movie but as long as you can ignore the problems with the script, editing, and camera work then you will not mind passing the time. The acting was not bad but you can tell these acting veterans stayed in their lanes and did not offer suggestions for improvement for the other jobs making this movie.
One person found this helpful

Patrick S. FrantzReviewed in the United States on October 11, 2020
5.0 out of 5 stars
A favorite underrated gem of horror
Verified purchase
Saw this movie on a scifi Saturday premier back when I was a kid. I sat in the living room watching my parents and their two friends play Dark Tower. Enjoying fantasy rpg board game being played. Meanwhile on the T.V. Route 666 started to play at its schedule time. I wanted them to change it because it sounded stupid. But my dad wanted to see it. so I stayed quiet after complaining for five minutes. and reluctantly watched it. and I have to say. I enjoyed it. Thought it was such an awesome movie when I was young. And I am still fond of it after re-watching it again on Prime. Like any other film it has its problem here and there. But as a whole I loved the idea of revenge horror tales. and this one hit the mark on it. It is an underrated gem of horror. Worth watching and wasting some time out of your day. I mean if you are already browsing and looking for movies. You might as well give it a view.
4 people found this helpful

New shopperReviewed in the United States on December 28, 2021
1.0 out of 5 stars
The worst of the worst
Verified purchase
From the script to the acting, this movie takes the bottom spot. Lou Diamond Phillips is a very bad actor and in this movie he lives up to his reputation. In fact, the entire cast is pretty pathetic. As to the script, it's so stupid that it's hard to watch the entire movie. For instance, they keep shooting at the ghosts that are "immune" from bullets. And they keep doing that throughout the movie! Don't waste your time. This is not just a B movie. It's a big F!

Marissa J. BradshawReviewed in the United States on March 20, 2018
3.0 out of 5 stars
It's so bad, it's pretty funny.
Verified purchase
I haven't seen a movie this bad in ages. So, so horribly bad, I swear that I had to watch it to the end. If you're in the mood for something laugh out loud absurd, dreadful and hilarious, this may be the one. It reminds me of some of the great 80s schlock shockers--except this is worse. Terrible acting, script makes no sense, there is no continuity. I actually had fun watching for the mistakes (like cars driving by in the background, magically repairing windshields and guns that never empty...). It's really bad, I warned you. But it's still kind of fun, hence the three stars.
4 people found this helpful
See all reviews
Back to top
Get to Know Us
Make Money with Us
Amazon Payment Products
Let Us Help You
EnglishChoose a language for shopping. United StatesChoose a country/region for shopping.
© 1996-2022, Amazon.com, Inc. or its affiliates