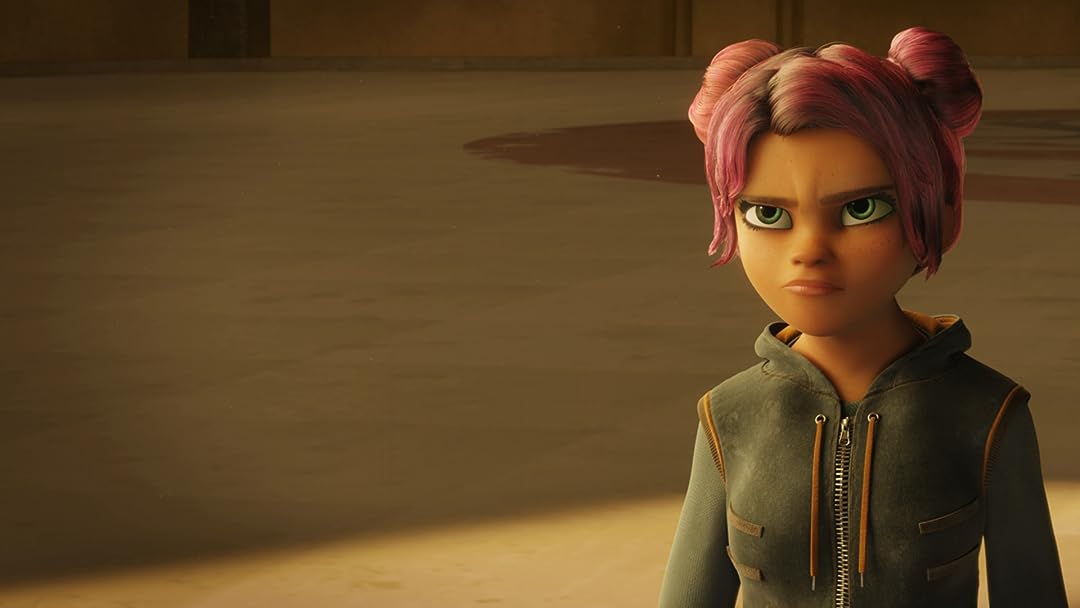 Mom of 3.... Watson’s! Reviewed in the United States on December 17, 2021
5.0 out of 5 stars
Finally a KIDS Movie!!!!
Verified purchase
My kids are YouTube Kids so when I cut their Wi-Fi to their phones & put on a movie…. I had nothing but “Mooooommmm, No! We don’t want to watch this stuff!” Well let me say… THEIR MINDS WERE CHANGED!!! After the 4th time watching it, I decided to leave a review.
Where to start other than my kids didn’t think they’d like it & we loved it. I wasn’t going to watch it however 2 minutes into it I laid my phone down & sat down with my kids.
The BEST THING for me as a Mom of 3. Ages 13, 10 & 6 (1 Girl & 2 Boys) was no CRUDE HUMOR, no words meant to be cuss words! No political statements…. Finally a KIDS MOVIE that’s just a Good Kids Movie. No BS show-horned in on your kids when your not listening which made me take the time to review it.
What is “Rumble” about? Well, the name is a dead-giveaway…. It’s about WRESTLING! I asked my kids to explain it to me & the 6 year old said; “I think this is the Future where we have alien-monsters that took the place of our wrestlers. A place has one Alien-Shark-Octopus that is the best but he leaves the town, he’s the towns Monster. The place they wrestled in is this girls, dads gym & he taught the towns best wrestler of all time. Rayburn! Her dad and Rayburn are gone and she had to replace the bad guy. She goes looking for a new monster & finds Rayburn Jr! So the kids come back & fight. Steve is not Good so she has to train him. Steve is Rayburn Jr Name! Then he starts fighting some monsters and gets good & fights the Bad Guy & you need to watch it to know what happens because I don’t want to RUIN it for you Mom!”
The 10 year old; “I think it’s got wrestlers talking for the Monster Wrestlers. Sounds like the Rock & John Cena (Terry Crews & Will Annette). It’s just a monster wrestling movie but it was actually really good. I will watch it again!”

All in All: My Families Con-census is …. WE WILL BE WATCHING IT AGAIN & it is one of the BEST Movies (recently) that’s come out for Kids. Remember back when movies were made just for kids & their was no statement crammed in every scene? Well this is it….

Tommy MikeReviewed in the United States on December 21, 2021
5.0 out of 5 stars
Finally a kids movie, with no woke propaganda.
Verified purchase
Thank God, a modern movie with no agenda, that is fun and enjoyable for the whole family.
17 people found this helpful

DaleReviewed in the United States on January 3, 2022
4.0 out of 5 stars
4 Star is probably high but this was a pretty good movie for everyone. It was well done.
Verified purchase
This is a hard decision on rating it 4 stars rather than 3 stars. There were a few things that they could of done without such as the tattoo dude in his underwear. There are a few instances of innuendo that kids won't get but is funny for the adults. This was really well done for the most part and has a pretty good message of being yourself and using what you enjoy to become great as well as making your own destiny rather than trying to live other's destinies. This does have gambling and the underground in it, it also has tattooing and tattoo removal in it regarding a super-fan in his underwear, so if that's a big deal for you then don't watch. However, this is a good and clean family movie that was well done. It was funny, cute, heartwarming and entertaining. This is wrestling at its finest without the language and other obscenities as with "Real" wrestling. It was a surprise that we all enjoyed.
5 people found this helpful

Robert DReviewed in the United States on May 7, 2022
5.0 out of 5 stars
Great Wholesome Movie
Verified purchase
Sometimes it's nice to stop being so busy and watch a wonderfully written story come to life in a great animation.
This story, much like many stories about combative sports, is centered on those moral qualities of endurance and determination, but there was more to this story. It's also a story of revitalizing a family legacy. The supportive character Rayburn Jr. is determined to be unique for the sake of not being overshadowed by his family's legacy, until he realizes that the legacy was meant to support other rather than for fame. Rayburn Jr. ends up challenging a monster who represents that opposing spirit of selling out one legacy for personal gain. In the end, Rayburn Jr. achieves a legacy of his own that honors those who helped and believed in him first and honors his own family.
This movie shows that it's possible to uphold the family honor, while also making a new path through life.
The writing was spectacular in conveying a great message through a wildly entertaining story of wrestling stars. Five stars.
4 people found this helpful

Leslie DavisReviewed in the United States on January 28, 2022
5.0 out of 5 stars
Great family movie!
Verified purchase
What a GREAT family movie. With a great message about family, determination, and never giving up. Great movie for the whole family to watch. We loved it!
7 people found this helpful

HappyLifeReviewed in the United States on April 27, 2022
5.0 out of 5 stars
Hidden gem
Verified purchase
I don't agree with the one star reviews and the movie is clearly advertised as a comedy so dance wrestling is ok.
The whole family was surprised by Rumble and a hidden gem of a movie.
Voice acting was good and the story was funny and great and so are the graphics.
I highly recommend it as a family movie night.
5 people found this helpful

Amazon CustomerReviewed in the United States on December 16, 2021
5.0 out of 5 stars
Fun
Verified purchase
Great fun and well just plain fun. Great for kids and I'm an adult and it was just fun.
6 people found this helpful

Bobbie4applesReviewed in the United States on December 19, 2021
4.0 out of 5 stars
Predictable!
Verified purchase
Prediction: One, if not both pairs of fathers return to train Quin and Rayburn Jr. in double tournament in Rumble II. Terry Crew will return as Tentacular. Tentacular and Rayburn Jr. will need to work together to win the championship.
4 people found this helpful
See all reviews
Back to top
Get to Know Us
Make Money with Us
Amazon Payment Products
Let Us Help You
EnglishChoose a language for shopping. United StatesChoose a country/region for shopping.
© 1996-2022, Amazon.com, Inc. or its affiliates