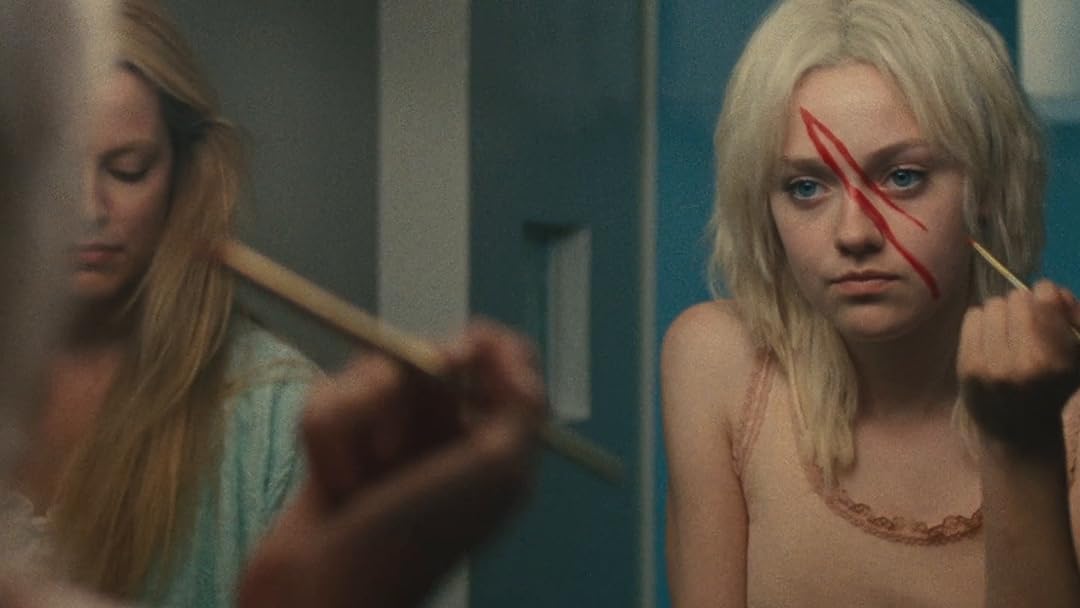 (2,103)
6.51 h 46 min2010X-RayR
The film follows two friends, Joan Jett (KRISTEN STEWART) and Cherie Currie (DAKOTA FANNING), as they rise from rebellious Southern California kids to rock stars of the now legendary group that paved the way for future generations of girl bands. They fall under the Svengali-like influence of rock impresario Kim Fowley (MICHAEL SHANNON), who turns the group into an outrageous success and a famil..

Ben CultureReviewed in the United States on October 24, 2015
4.0 out of 5 stars
Would Be 5 Stars If Not For the Commentary Track
Verified purchase
I'm sure enough has been said about the film itself at this point. I agree that this film is engaging, moving, well casted, well acted, and just an overall great flick. I'm always delighted to see comments by young people who have discovered the awesomeness of Joan Jett and her original band, the Runaways. Their story is indeed fascinating, and the movie tells it well, while keeping us excited and making us care about the characters. I've been a Joan Jett fan since age 13, in 1984, and it's very gratifying to see how my idol has grown into rock and roll legend. It's good to know I wasn't the only teenage boy who thought Joan Jett was as cool as any male rock star. This IS a good movie, and if it leads new listeners to the Runaways and Joan Jett's solo career, then I'm happy to recommend it to anyone.
I just want to take one star off because of the commentary track, which is done by Joan Jett (the real one, who was heavily involved in the making of this film), Kristen Stewart (the actress who portrays Jett) and Dakota Fanning (who portrays singer Cherie Currie).
Anybody who cares enough to watch this film with the commentary track is probably doing it to hear the real Joan Jett's comments. How many actors provide great commentary? Very few. They are actors for a reason: They can't articulate an original thought very well. They were meant to act out dialogue written by others. Their own thoughts are simply not very interesting. Stewart and Fanning babble on, complimenting each other's performances, laughing at themselves, and recalling things like "it was SOOO hot that day!!!" and "I was SOOO nervous about doing this scene!!!" They seem like perfectly nice people, but they don't have anything interesting to say.
I think most fans would agree that Joan Jett is only as good as the people she's working with. I watch every interview with Jett I can find online, and the sad fact is, most interviewers ask her the same old, predictable questions, and Jett answers them the same way in every interview. Well, at least we know she's honest! But on the rare occasion she sits down with a GOOD interviewer, she is as fascinating as her Queen-of-Rock legendary status would indicate. She's not a raconteur, or a great storyteller, and she refuses to dish dirt, but she can be very funny and surprising.
What I'm saying is, this commentary track should have included somebody intelligent and articulate for Joan Jett to talk with, and Stewart and Fanning just don't do it. They both did a damn good job of acting in the movie, but they have nothing interesting to say, which drags the real Joan Jett's commentary down with them. More often than not, it's HER interviewing THEM, which is just all sorts of wrong.

Movies Are CinemaReviewed in the United States on June 20, 2019
5.0 out of 5 stars
Glam Music Fans Need Apply to this Glorious Flick
Verified purchase
This flick far exceeded my expectations with a solid portrayal of the glam rock era and the almost true story of a chick band put together by a somewhat famous recording producer. The story seems to be pretty true to the actual events wherein The Runaways become a big hit in Japan and release a couple of decent songs in the USA. All the roughage of the rock lifestyle is included and the compromises needed to find fame under strong tutelage, hard work, and the always difficult road to getting along with bandmates is shown with raw abandon. So glad I added this to my collection of "music" flicks and it made me want to listen to much more of the band that brought us Joan Jett and Lita Ford. The performances were terrific overall. I will watch this again in the future and reminisce about the Sunset Strip happenings back in the day! Fun, furious, wreckless, and musical train wrecks that I would not have missed for the world...
7 people found this helpful

Nyx KReviewed in the United States on August 18, 2015
3.0 out of 5 stars
I honestly liked it but it was nothing more than okay for ...
Verified purchase
I'm not a big fan of movies portraying music groups, because it always seems to come crashing down in the end. There are just sooo many of those and in most, or maybe all of then its always the same this that ruins all of them. Guess I'm tired of the same old story.

But for some reason I kept running across the trailer of this movie while looking at previews of movies to check out. So I had to give it a chance due to extreme curiosity. I honestly liked it but it was nothing more than okay for me. Sadly Kristen Stewart acted pretty close to the same as she does in all her movies, maybe a little more determination in her attitude but pretty much the same. Dakota Fanning did ok as well. I feel the director played it safe with picking them as the main characters. They didn't out star themselves and blow me away. They just performed within what they are capable of doing (or seems like).How they acted and what they did seemed about as equal as anything they have done in other movies. I don't mean to seem rude about their acting for those who might get offended by this, its just my honest opinion. When I saw the previews I was hoping for much more from both of them. I was hoping for powerful rock your socks off kind of movie, due to the style of The Runaways. Th trailer ended up being nothing more than a tease.

This movie is just in the middle for me. It wasn't terrible but it wasn't outstanding.

Z. McLachlanReviewed in the United States on April 5, 2019
5.0 out of 5 stars
Great movie.
Verified purchase
The whole thing is wonderful, except I wish they hadn't made a "generic" bassist. Not sure what kind of crap went on to change Jackie Fox to the character Robyn Robbins. Otherwise, this movie is perfection. I always wondered who could ever play Joan Jett, as she has unique body language and expression - Kristen Stewart NAILED it. I feel like cutting school and doing delinquent things every time I see this. Except I'm in my 40's..... ;-P
5 people found this helpful

Mark S. CrawfordReviewed in the United States on February 23, 2015
3.0 out of 5 stars
Brooding & Moody (aka, would it hurt to smile once in awhile?)
Verified purchase
I didn't know quite what to make of this movie. If it was to entertain, it was more of a downer. If was to inform, it was incomplete in its telling. If it was suppose to be about the Runways, it was really more about Joan Jett and Cherie Currie.

The whole tone of this movie was somber and bleak. There didn't seem to be one "bright spot" in the whole telling. Not that every movie has to have rainbows and butterflies, but I don't recall one moment of this movie where the characters expressed a constructive and positive reaction to any scenario. It seemed what little laughter there was, was in the midst of some kind mischievous. This is definitely not a "warm and fuzzy" movie. Having such a bleak vibe, and portraying the characters as crass and crude, it was hard to relate to any of the characters and have any empathy. It's a shame, because the movie was very well cast. Kristen Stewart as Joan Jett and Dakota Fanning as Cherie Currie were excellent choices, as were their performances. The other band members seemed to get lost in the shadow of Jett and Currie, which is a shame because I'm sure the others contribute to the success of the band. Most notably understated was Lita Ford. Ultimately, the movie is not so much about the Runaways as it is about two people - Jett and Currie - who initially needed each other, but ultimately wanted different things and went their separate ways.
3 people found this helpful

Rich M.Reviewed in the United States on March 31, 2021
5.0 out of 5 stars
Phenomenal Rock History Bio-pic!
Verified purchase
Great biographical drama that documents the rise & fall of Rock's premier all girl band. Great music and believable acting made me forget that Joan Jett and Cherie Currie weren't really in the film. Instead it stars Kristen Stewart and Dakota Fanning (as you've never seen her before). If you're not familiar with the group or their music, this movie is a great introduction and will make you want to go out and discover the rest of their music and history. You likely know some of their songs, as they are included in various movie soundtracks (including Guardians of the Galaxy). This movie is well worth buying, as you will definitely want to see it more than once.

Trail StomperReviewed in the United States on May 24, 2016
3.0 out of 5 stars
Good, but mis-titled
Verified purchase
Not a bad movie, but never should have been called The Runaways - this was a bio about Joan Jett and Sherrie Currie and barely acknowledged the other members of the band - Micki Steele, Jackie Fox, Lita Ford, and Sandy West. Even when the final credits ran, the only 'where are they now" update blurbs were provided for Jett and Currie. With that being said - Kristen Stewart and Dakota Fanning gave solid performances, but the real star was Michael Shannon playing the band manager Kim Fowley - he was fantastic and was as close to Fowley in the flesh as you will ever get. I understand that the documentary "Edgeplay" is a much more thorough and inclusive history of the band and comes with very high ratings and I will be looking to watch that soon.
7 people found this helpful

HappyShopper21Reviewed in the United States on March 9, 2020
4.0 out of 5 stars
Spoilers
Verified purchase
Stewart & Fanning did a great job. This is a huge part of rock history but sadly, it neglects Lita Ford. Even though I side with Cherie regarding their stories, the movie needed to expand on Lita’s contribution to music post Runaways and it totally neglected that. It would have been more inspiring to see Cherie acting at the end instead of working in a bakery shop but at least she seemed content.
One person found this helpful
See all reviews
Back to top
Get to Know Us
Make Money with Us
Amazon Payment Products
Let Us Help You
EnglishChoose a language for shopping. United StatesChoose a country/region for shopping.
© 1996-2022, Amazon.com, Inc. or its affiliates