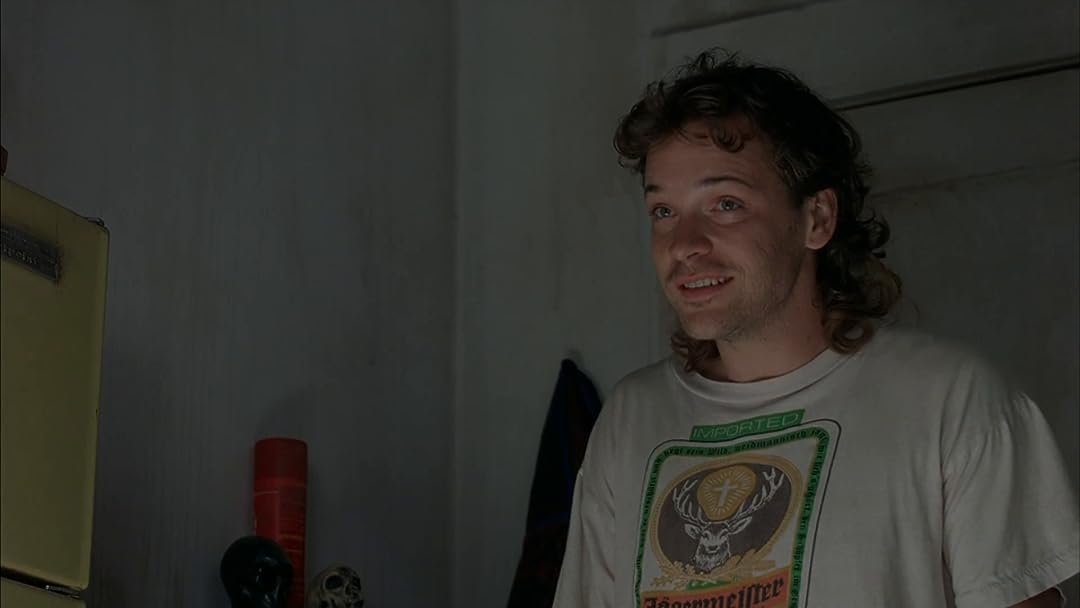 (1,638)
7.11 h 43 min2002X-RayR
The Salton Sea is a character-driven crime thriller about an unlikelyhero entangled in a web of deceit and treachery.

JoReviewed in the United States on December 28, 2020
5.0 out of 5 stars
the badger! the full cast and crew excellent job and great film!
Verified purchase
Decided to write a review, or my opinion about this film.

i stumbled upon this film one night surfing cable channels, started watching it about halfway through. I was instantly captivated, and then drawn in till the final scene. Its a great film, idk. what all i can add to the list, that hasnt been said by other reviews.

Vincent Daforino(sp) does his magic, Val kilmer does an outstanding job as well! as well as all the other actors in this.

The movie's plot(?) or story or premise? to me, and in a very basic way reminds me of the story in "the crow" in regards to val's character, and then brandons character and what their agenda is, avenge(?) the death of their wife/girlfriend, etc. again in a very core or fundamental basis of storylines.

this movie also got me to google "the salton sea" which caused me to learn about the Salton SEa, its struggles and current probably mostly unknown struggle, and the very interesting history of the abandonded development of a resort community, and the people that live there, the wildlife and how LA and california, in genral's increasing demand for drinking water,
anyways go to youtube and look up The salton sea, (not the movie but the documentary about the place )

the salton sea is now on my list of places to visit and experience before i die, as it is a beautiful and amazing sorta post apoctolyptic landscape(?) and a person who despite living in missouri, helps spread awareness and a supporter of getting the Salton Sea back to good health, and maybe one day hopes to hear or see it, restored back to its previous grandure and back to being the Largest body of water west of the mississippi, and its 400 some odd species of bird and water foul back to calling this place home again

idk just wanted to share my love for this movie a

SuebabyReviewed in the United States on April 30, 2018
5.0 out of 5 stars
GREAT movie - don't even know how this one never got the recognition it deserves.
Verified purchase
If you haven't watched this one yet,, do yourself a favor and do so. What an amazing movie; extremely well-cast (Val Kilmer and Peter Saarsgard absolutely slay it in this one, really making their characters such likable and real anti-heroes, and everyone else in this movie is outstanding as well) and an amazingly beautifully written and crafted story you'll be entraced by til the end. Can't recommend it highly enough. Well, what are you waiting for?
8 people found this helpful

johnReviewed in the United States on April 19, 2020
4.0 out of 5 stars
The Salton Sea
Verified purchase
An underrated movie, well casted and acted. Obviously there was either an experienced or well researched subject of the screenplay as well as an accurate depiction of how this life is in the movie. The Salton Sea and what happened in the movie made me do research of my own, Salton Sea has a story as well as what the charectors portrayed. I would say this may be one of the best acted movies by Val Kilmer.
3 people found this helpful

MN JunebugReviewed in the United States on December 19, 2016
5.0 out of 5 stars
Insider view of the messed up life of tweekers
Verified purchase
I rented this movie initially back when block busters was still a store, not a streaming site; I came across it while I was browsing movies for something to watch and had to buy it. Val Kilmer is the main character and his performance is amazing and compelling. The world of meth addicts "tweekers" is explored and his character is in the middle of a group of drug users and the cops. The twist at the end will blow your mind, if you have an open mind and set aside your personal feelings toward drug users...just for a little bit. Definitely love this movie and would recommend it to any adult with an open mind.
9 people found this helpful

Morgan V. MadisonReviewed in the United States on February 7, 2012
4.0 out of 5 stars
unusual, dark film about a character who is playing two separate, but related, roles in life
Verified purchase
played by val kilmer - great acting, great cast, clever story.

kilmer is a meth addict who spends most of his time getting high with or buying meth from people who belong in the back ward of a mental institution. some of their bizarre antics are amusing in spite of their complete, pathetic addiction.

kilmer is also a confidential informant for the police - in fact, an unusually observant and reliable c. i. the detectives that he reports to only know him as a junkie and treat him pretty bad.

however, kilmer is also a different man, a jazz musician whose wife was shot during a violent crime in which they were just at the wrong place at the wrong time, and he wants to find the shooter. the cops know nothing about this other life or kilmer's motive. the shooter is somewhere in this world of meth.

apart from his c. i. work with the cops, kilmer wants to set up his own sting by purchasing a quarter million dollars worth of meth from a dealer. kilmer's sting and his revenge for his wife's killing are connected.

the big dealer is played by vincent d'nofrio. i didn't recognize vincent. his face was familiar but the character is so different from his other work that i couldn't place him. his character is a meth crazed, bizarre buffoon. crazy and clownish. mean and dangerous, too.
he has a pet badger in a cage that he uses to get men to tell him the truth when he suspects they are trying to cheat him - tell the truth or mr. rabid badger will be let loose to feast on a very delicate part.

i would watch this film just to see vincent let loose as this laughing, joking creep, with a poor quality fake nose because he ate away his real nose with so much meth use.
7 people found this helpful

joeReviewed in the United States on January 5, 2015
5.0 out of 5 stars
having some personal history with the product being used in ...
Verified purchase
having some personal history with the product being used in this movie made it al the more personal for me
a tweeker back in the early 70,s and blessed enough to live through that time but I have to say that this movie captured alot of the goings on that happen when there is a few close friends that want to see how long a long time is when you dont sleep for a few days
the main line in the story about the violence and insanity that surrounds this drug is not exaggerated at all whether in my days of use or now in this day and age-narcs and stoolies and guns-well done movie about a really tragic and evil substance
8 people found this helpful

Chrissy E.Reviewed in the United States on August 10, 2020
5.0 out of 5 stars
Not easily forgotten
Verified purchase
I seen this movie so long ago , yet I have never forgotten it. I just fell in love with it. I knew some day I would get it & add it to my collection. Who knew 7/2020 would be the year.
One person found this helpful

TorinoReviewed in the United States on June 16, 2014
5.0 out of 5 stars
Very noir and of course enjoyable.
Verified purchase
Very good movie, amazed it isn't more popular. Val Kilmer does an excellent job of portraying a would-be tweaker trying to get revenge on some dirty cops. The film has some very stylized moments with flashbacks and flash forwards. There is some humor to temper the noir aspects and keep the film from being too bleak. Lots of action, violence, and some interesting characters. Vince D'Onofrio steals the scenes by playing a psychopathic meth dealer, and Peter Sarsgaard plays a very touching tweaker buddy. Good story, great cast, shame it didn't get more notoriety.
2 people found this helpful
See all reviews
Back to top
Get to Know Us
Make Money with Us
Amazon Payment Products
Let Us Help You
EnglishChoose a language for shopping. United StatesChoose a country/region for shopping.
© 1996-2021, Amazon.com, Inc. or its affiliates