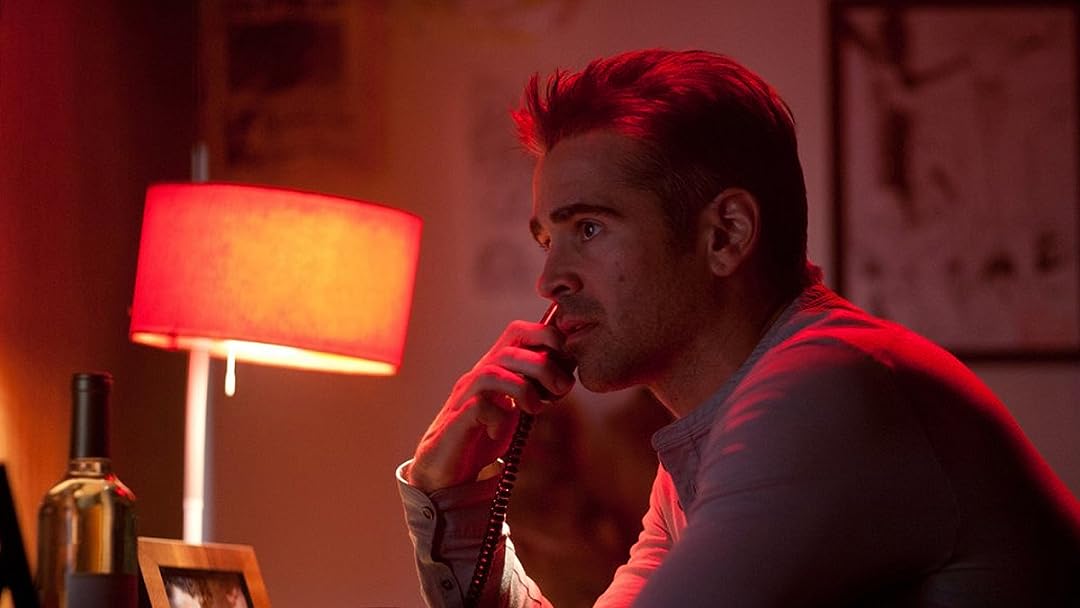 Amazon CustomerReviewed in the United States on January 4, 2016
5.0 out of 5 stars
Surprised this movie wasn't rated more highly, until I read the negative reviews...
Verified purchase
This movie is not for those who are offended by curse words or violence or social/political incorrectness.

But then, the movie is called "Seven Psychopaths", isn't it? Shouldn't that suggest that the film probably wouldn't be enjoyed by those who are easily offended by such things? Those are the sorts of things psychopaths might be likely to indulge in...right?

Sadly, the content of most of the 1- and 2-star reviews seems to suggest that quite a few people didn't make that inference. "I stopped watching because of the repeated use of the f-word." "I couldn't continue watching after they called the one lady the n-word." Etc. etc... These are horrible people we're watching, folks. Of course they're going to offend us.

Oh well, I thought the movie was great. But I'm not about to be like so many other reviewers and list all of the plot details. Spoilers are no fun.

This is a dark comedy. It's certainly not meant to appeal to common sensibilities; most often it's meant to satirize them. It also (quite amusingly) satirizes itself and the general "gangster/revenge drama" genre which it very much knows it fits into (mostly). The movie laughs at itself, it's intentionally absurd at times, but if you stick around and pay attention the payoff is there to be enjoyed.

Rick JamesReviewed in the United States on July 20, 2019
2.0 out of 5 stars
Walken couldn't save it :)
Verified purchase
What a mess. "Seven Psychopaths" huh? It's "Three Friends in Hollywood". The way the movie is titled and set up it leads you to believe that at least a coherent story about seven psychopaths is incorporated into the film but it's not. The screenwriter character enlists some help and inspiration for his script from his two friends in the midst of a dog kidnapping. While some high jinks play out they fail to go beyond mild amusement. At the same time, it doesn't fully commit to being a comedy. It incorporates some violence and drama as well. None of works together in this instance. There's no chemistry between the leads unless you enjoy hearing a guy scream at his friend repeatedly for being an alcoholic. Walken hands in a decent performance, nothing memorable, while the two younger leads over act their hearts out terribly. That aspect of the movie was awful and distracting at best. The whole movie feels like what someone thought was going to be really cool, but really didn't end up that way. It was like they were trying to jam two movies into one but ran out of time to let either story flesh out. It's not a bad idea if you can make it work. It didn't work. Sorry! Thank you for this action? drama? comedy? film inside a film? Whatever it's still wasting my time writing this. Cute dog though. :) Hi Bonny!
14 people found this helpful

Kindle CustomerReviewed in the United States on September 22, 2016
5.0 out of 5 stars
Look...it's got Christopher Walken in it...what more could you ask?
Verified purchase
Somewhat farcical creation, in which the screen writer manages to avoid most of the pitfalls inherent in being a writer, writing a righteous writer's story, while throwing together a bunch of grisly, darkly comic scenarios in a more or less logical fashion. Mostly. Give up your deep seated/seeded/ceded need to find real life characters to sort of represent what you'll find in this movie and you'll have a good time. There's a fair amount of blood, but limited in duration. Some very strange anti-heroes (all seven psychopaths) and one near realistic character at the periphery, collecting material for a movie. Not as much fun as Get Shorty, and more of the writers-writing-writers issues, but different. One I recommend seeing.
38 people found this helpful

dogstarReviewed in the United States on October 1, 2017
5.0 out of 5 stars
Full of Great scenes and Actors Very Entertaining
Verified purchase
Very funny but dark. Excellent cast. Full of great scenes. The plot almost doesn't matter because the characters and the individual scenes can be savored. Three of the characters are writing a script together and it's almost like they get trapped inside what they're writing. It's just a really unusual film but if you're a fan of any of these actors I think you'll love it. Christopher Walken of course it great and Colin Farrell is a real master. There was some dark stuff and even things that seemed unnecessary but the funny thing is that is addressed later so it all ties together. Anyway, it's highly recommended. It's as much about writing as it is anything else and will appeal to people who like creative experimental and strange films.
24 people found this helpful

StreetWorkoutReviewed in the United States on November 28, 2020
5.0 out of 5 stars
SO Original and Engaging with Stellar Cast
Verified purchase
It's a crime based movie. There are criminals doing criminal things. And that's pretty much where the formula dissipates. I'm not about to spoil this movie, but to understand, especially lately, I've had a difficult time finding movies I could tolerate from beginning to end, much less enjoy, ones that have those inevitable lulls that have you thinking "if this doesn't pick back up soon I'm outta here," THIS one I enjoyed just about every single minute. The story line was one I've never seen before, EACH actor was fully on his game and just fantastic. It has action that leaves you breathless not so much for it's intensity but for it's emotional content. Off-beat enough to make you chuckle frequently, cameo appearances that'll get to you, but the feature guys just blow this up hugely. Christopher Walken's best role in a long time of many great ones, Woody Harrelson makes a unbelievable character live, Sam Rockwell is at his best, a bit crazed but with a bizarre continuity to his mania, and Collin Farrell JUST right as a writer that slides sideways into a story that you couldn't write and make anyone believe really happened. The supporting cast has many luminous character actors including Tom Waites, Harry Dean Stanton, Crispin Glover, Zeljko Ivanek, no one is just scenery it seems. Just honestly one of the best times I've had watching a movie all the way through the first time in quite a COVID while.
7 people found this helpful

BAT-505Reviewed in the United States on December 30, 2020
1.0 out of 5 stars
WAIT !!!.. and read my review first before you think about purchasing this movie
Verified purchase
All I can say is this.. the stars in this movie must have truly truly been broke ..and, needed some
Money. BADLY... because this was the worst movie,.that I have ever ever Viewed... and now with this covid-19 it's truly going to be hard for actors.. to make movies..
Because if they have to wear a mask like everyone on the set would have to do I would suspect their mask would be covered in blue screen so that you cannot see the mask.. but if you are going to risk your life in the entertainment business to make a movie ..I would truly hope that you would find a script and director, that would truly wake it worth it..and NOT A STUPID MOVIE LIKE THIS ONE.. this is the first time that I have purchased a movie and only watched 10 minutes of it it turned it off.. and put another movie here in my Blu-ray player to watch.. and then come back to this movie a few days later and say well what the heck let me see what else goes on in this movie.. and I was so disappointed I didn't know what to do.. it was just horrible.. I truly did not think there was a movie that could go past ..
being stupid..but this movie does..
As a matter of fact when you look up the word STUPID..in the dictionary.. they should definitely have a copy of the slip cover of this movie put in the definition..
So , I hope you do not waste your money on this movie because Christopher Walken as well as the other stars could not save this movie..👎👎👎👎👎👎👎👎👎👎
5 people found this helpful

Tom HooverReviewed in the United States on June 25, 2016
4.0 out of 5 stars
A Fun Look Into The Madness of Filmmaking
Verified purchase
Seven Psychopaths is a particularly difficult film to enjoy, I feel. This is mostly due to the confusing ad campaign which made it seem like a wacky comedy, when it is so much more. Even then, this film may not be to everyone's liking, mostly because of the disjointed nature the plot and some of the more bizarre aspects. Even still, fans of film as a medium will enjoy it. The meta narrative woven throughout the plot, linking the protagonist's unfinished script and the plot of the film in such a way as to explore the genre of crime drama/action films and showing just how messed up the minds of characters in those films would actually have to be in order for the plot to actually happen. Yet it also pokes fun at the art house crowd as well, with Colin Farrell's pacifistic Marty's desire to write a life affirming film about psychopaths coming to a head with Sam Rockwell's more unhinged Billy and his more mainstream desire to make it an action film with gratuitous gore and sex so the film isn't boring. Peppered throughout, are some great moments both comedic and dramatic, with the always wonderful Christopher Walken stealing every scene he's in.

As a comedy, the film is rather short on laughs, but for fans of director Martin McDonagh's previous film "In Bruges" they will feel right at home with the subtle humor mixed in with surprisingly serious drama. Regardless, Seven Psychopaths proves to be a fun, mad, ride that is beautifully shot and edited and definitely worth a watch.
18 people found this helpful

Rebecca M.Reviewed in the United States on May 17, 2020
1.0 out of 5 stars
Aimless, plotless, pointless
Verified purchase
It seems that they found a great cast and set out to give them the worst work possible. The actors played their roles well... But the roles made little sense, there was no substance to the movie, and it struck us as some sort of experimentalist piece written by a preteen but handed a large budget. Don't waste your time!
5 people found this helpful
See all reviews
Back to top
Get to Know Us
Make Money with Us
Amazon Payment Products
Let Us Help You
EnglishChoose a language for shopping. United StatesChoose a country/region for shopping.
© 1996-2022, Amazon.com, Inc. or its affiliates