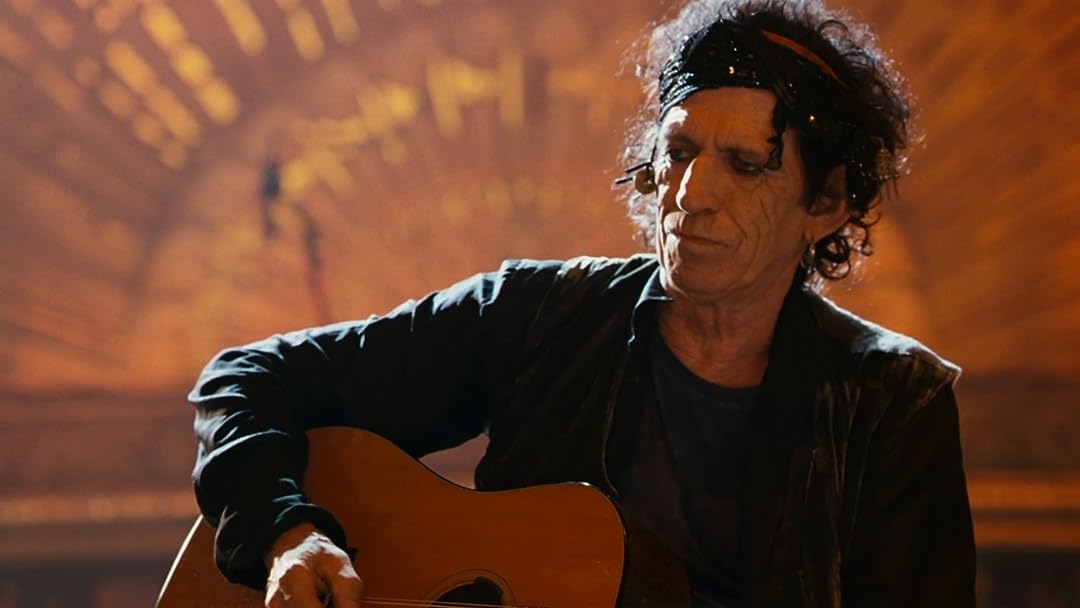 (1,195)
7.12 h 1 min2008UHDPG-13
Over two nights at The Beacon Theater in New York City, Martin Scorsese offers a glimpse into the lives of The Rolling Stones, resulting in an intimate combination of performances, interviews, and backstage footage.

theGamiReviewed in the United States on July 23, 2022
5.0 out of 5 stars
Jagger is amazing
Verified purchase
This is an excellent movie! Mick Jagger must be one of the best front men in rock and roll. His ability to engage the audience is truly remarkable. What he lacks in instrumental ability he makes up for with his vocals and charisma. A must-see for any Stones fan!

IthacaMattReviewed in the United States on July 14, 2022
5.0 out of 5 stars
Later Day Rolling Stones When They Put In the Effort
Verified purchase
When Martin Scorcese films you, you try a little harder. The Stones had gotten very lazy on their money making tours of the '90s. But turn on the cameras, and it was just like old times. They rocked out big time.

Amazon CustomerReviewed in the United States on August 1, 2022
5.0 out of 5 stars
Wonderful
Verified purchase
Great presentation of a fantastic show.

Perry CelestinoReviewed in the United States on November 30, 2008
5.0 out of 5 stars
Live On Stage With The Stones
Verified purchase
This film is a brilliant documentary/concert depicting the Rolling Stones as still one of the most enduring popular music acts. The great thing about this film, besides being another fantastic effort from Martin Scorsese, probably the best music-documentary filmmaker of all time (he should have done the Chuck Berry 60th birthday gig), is that the viewer actually feels that they are part of the film and on stage with the Stones! This well constructed film follows the Stones, who are on tour, to a charity concert in New York. It's in an intimate theater setting which was specially designed for this movie. Not at all like some of the previous Stones concerts at Stadium venues!

The photography and sound are first rate. Guitarists will love the close-ups of Keith and Ronnie, as well as the selection of guitars (Telecasters, Gibsons, a Guild and others) that Richards uses. The song selection is superb and well recorded and while the film is a documentary it is full of personal touches regarding the making of the film, old interview footage, conversations and even a few problems.

My only criticism of this film is that they didn't get Bill Wyman to return for it as a retrospective and that they didn't include at least some historical footage of Brian Jones - who really founded this band and got the Blues going in England. Ok, you can't have everything.

The band is truly amazing. The Stones modernized their sound by augmenting their live shows with horns, background vocals and even strings. However, a highlight are the vocals of the lovely Lisa Fischer, whose brilliant LP "So Intense" (check it out) won a well-deserved Grammy in about 1991 and then mysteriously disappeared from the scene, because of many problems - some business- only to reappear with the Stones. She also sang with Tina Turner.

There of course have been a lot of reviews of this film as you would expect, so I won't go through the entire set list. I feel the three best tunes in this film are (1) "Just My Imagination" - I have always respected Mick Jagger as vocalist who would do covers of the great soul artists. He did early versions of Wilson Pickett, Solomon Burke and Otis Redding tunes (that takes GUTS). In the late 1960s the Stones did a cover of the Temptations "My Girl", after it had already been a number one tune. Wow! It was not that good. This tune, a later hit by the Temps, is just brilliant. A great arrangement, tasteful solo by Keith, and a great overall rock-soul feel. This is the best tune in the set.

(2) "Champagne and Reefer," with Buddy Guy is also fantastic. Buddy plays in tune (great) and the song is really dedicated to Muddy Waters who originally recorded it. Buddy was a longtime session man at Chess Records in Chicago and played for years with Muddy. I also liked Mick's blues harp in this tune, it recalls the first two Stones' LPs when he did some of the first Blues harmonica heard by white kids in America on tunes like "Little By Little" and "I'm A King Bee".

(3) The third best tune, I feel, is the Brian Jones influence in this concert. It is "Paint It Black". This is the best of the bonus tunes and shows the Stones great writing ability. They pegged this tune in the late 1960s with the "Flower Power" days and of course, Brian, the multi-instrumentalist, learned to play sitar better than George Harrison did. Anyway this tune still sounds fantastic today!

This is a must have DVD for all Scorsese, Stones, Rock or Blues or Film fans. Great price, great production, good history and a personal feel that we always get from Martin's films. This will be a classic in years to come.

Mark KnowsReviewed in the United States on June 12, 2022
5.0 out of 5 stars
EXCELLENT
Verified purchase
Really enjoyed the show. Thanks!

GEReviewed in the United States on February 8, 2014
5.0 out of 5 stars
Mick Still Rocks
Verified purchase
I just recently purchased a Blu ray player and "Shine a Light" is one of the first Blu ray disc that I have watched on my Sony TV. This is an excellent concert if you like the Rolling Stones.

Video: The picture quality is excellent.
Seeing Keith Richards up close in 1080P isn't for everyone as blu ray displays every single wrinkle of his face like a very dry dirt road. It's amazing that he is still rockin'.
There were many cameras filming the action and the overall feel is that you attended a concert and were in the crowd rockin' with Mick Jagger. Cameras also effectively catch action on the stage up close as they perform.

Audio : Excellent Sound quality of the concert.
I have a Pioneer receiver that drives 5 speakers in surround sound. My Pioneer plays analog and I is not digital. The blu ray disc allows about three options to choose from so you can select which audio performs best with your sound system. The recording is very alive and catches the energy of the concert. The mix is good as you can hear Mick's vocals while also hearing the drums of Charlie and guitars of Richards and Ronnie Wood.

Performance: I'm amazed that after all these years, these guys can still take the crowd into their hands and rock them.
They effectively breath new life into songs that they have performed countless times over the years. While doing "Brown Sugar" Mick leads the audience like a conductor as they sing "ye, ye, ye, wooo!" You have to see and hear it. Awesome.

They cover "Just my Imagination" a tune associated usually with the Temptations version of a happy sounding song. However Mick captures the anger and frustration of the song which completely makes sense. After all, the object of his affection doesn't even know he exist and this romance is a thing he was forced to manufacture in his mind. At one point in the song Mick exclaims, "she doesn't even f-ing know me!" in a heavy British accent. I loved it and the once beloved Temptations version is now lame next to this.

Guest appear as the blues guitarist Buddy Guy joins Mick on stage to perform a tune about getting high and Buddy appears that he just might be. The performance is very raw and blues at its finest.

Chistina Aguilera sings a rather saucy suggestive tune with Mick and they are good together. They seem to enjoy the performance. It is soulful and their styles provide contrast.

There are old news clips of the Stones mixed in from over the years. They are short, interesting, and not over done. The blu ray moves at a good pace from start to finish.

"Shine a Light" is an excellent Blu ray that combines clear video with well mixed audio while capturing one of the best rock bands ever, doing what they have done for generations and they can still bring it. Enjoy

Steve HabigReviewed in the United States on May 30, 2022
5.0 out of 5 stars
Great sound
Verified purchase
Great sound.. I only wish the concert was not interrupted by the talking parts.

M. HughesReviewed in the United States on January 10, 2013
4.0 out of 5 stars
3.5 Stars Really - A Number of Issues
Verified purchase
I am the Stones Authority. And reluctantly I must agree with a number of the negative reviews of this DVD. When I first heard about Scorsese making this film I was quite excited. A documentary of the band working up to a show at the Beacon, but as it turned out - it really is not a documentary, it is just a concert film - of a concert pulled together for the purpose of shooting a documentary. You know, Martin, make it one or the other. The documentary aspect of it starts out well enough, but then is abandoned for the concert film and we never return back to the documentary. Too bad, because the documentary aspect was fairly interesting. And I really don't need Bill Clinton or any of that Global Warming crap. Is this a big thing for Scorsese? Does anyone know? And what the hell do either have to do with the Stones and a documentary about them preparing for a show? Since this "documentary" is so contrived - it is anything but a documentary. So it is little wonder that the performance is not that inspired. It is not bad, but just look at the faces of the girls pulled in from the Elite Modeling Agency to stock the front row. This is not the Stones fan base. These hot little brats have never heard of the Stones, and couldn't name one song if their lives depended on it. Kind of a shame really, because the Beacon Theater is a great place to see a show. I saw Keith there with the Expensive Winos back in '89 or '90, and this could have been a great DVD, but I don't think Scorsese put a lot of brain power into this one - figured it would just work out, because it is the Stones. Now, on the plus side, it is nicely shot. The audio is actually pretty damn good, but for the annoying tendency in the mix to "focus" a solo or other instrument when we cut to its respective "close up". And the set list is pretty good and I don't have a problem with the guest appearances. I don't care about Jack White and his presence doesn't add anything. I don't really care about Aguilera either, but her duet with Jagger on "Live With Me" is actually one of the DVD's hi-lites, as far as I am concerned. Buddy Guy is great. I wish Jagger had sung "Connection" - an old favorite of mine - but was happy that it was there even with Keith singing it. All in all it is not that bad, it is actually pretty good, but it could have easily been so much better if Herr Director had made up his mind about what kind of film he really wanted to make. Scorsese kind of wings it and the whole thing suffers as a result.
2 people found this helpful
See all reviews
Back to top
Get to Know Us
Make Money with Us
Amazon Payment Products
Let Us Help You
EnglishChoose a language for shopping. United StatesChoose a country/region for shopping.
© 1996-2022, Amazon.com, Inc. or its affiliates