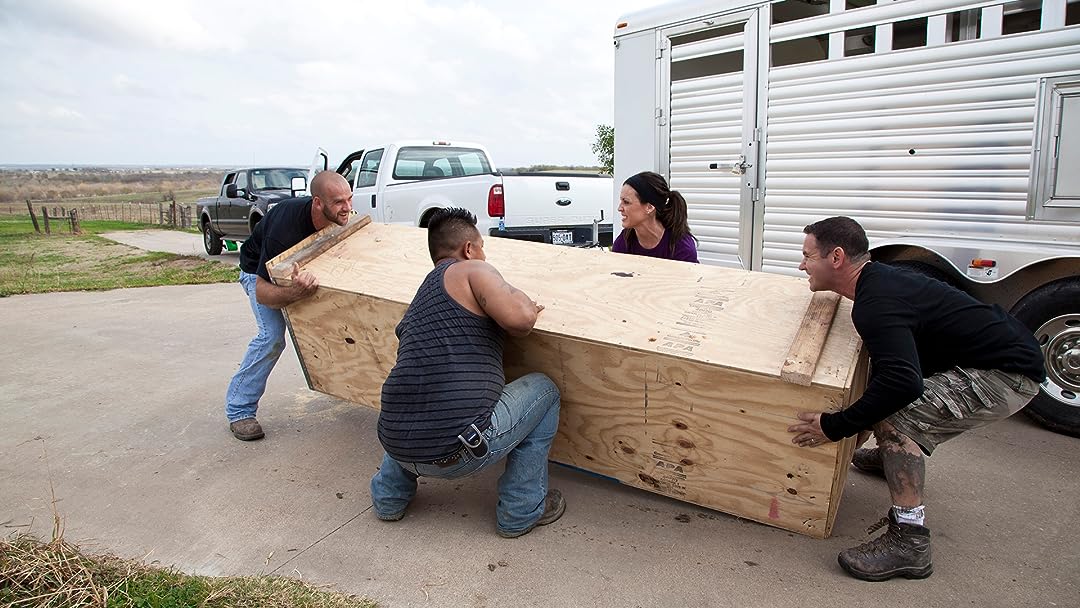 (17)
2012TV-PG
Follow six independent shippers who have discovered that fortunes could be made transporting items that traditional carriers won't touch in Shipping Wars. Each episode dives into the cutthroat world of rookie haulers and seasoned movers as they battle for the chance to transport the un-shippable and any setback can cost big bucks.

A.BinkleyReviewed in the United States on November 5, 2019
4.0 out of 5 stars
The show is good, but the streaming episode order is WRONG!
I like this show, the shippers are great and fun to watch (especially the cast of seasons 2-4). This is the only reality TV show I have gotten into. So it is very upsetting that when I tried to watch every episode straight through in a classic internet streaming binge that several of the episodes are completely out of order. Prime shows up saying it doesn't have one of the seasons when it has all of them but season 3 is mislabeled as additional episodes of season 2 and season 4 is labelled as season 3. Furthermore TubiTV shows season 1 episode 3 instead of season 3 episode 1. If you go to episode 3 of season 1 it is the same episode, they just don't actually have season 3 episode 1 at all. Filmrise is just flat out confusing. After realizing I was watching the same episode again I went to IMDB to make sure I was getting every episode and found that Filmrise had episode 1 of season 3 but it was labeled as episode 2, they had linked the wrong video to the otherwise correct title and description. So you click on "Safari so good" and get "More Bullship" and vice versa. It seems strange that there would be massive labeling errors with the same show on 3 different services so I can only imagine that this must be A&E's fault. They must not have taken the time to upload the videos correctly since as the original broadcaster they are the only common denominator. Either that or the show is cursed and each separate streamer that has the rights to the show has managed to screw up its episode order completely independently. Anyways, if you don't care about the order of episodes then this is pointless, the show doesn't really have a storyline after all, the episodes aren't really connected like that, but either way Shipping Wars is worth the watch just to see Marc and Roy being cranky old men, Jen and Robbie being gorgeous women who can hold their own, and seeing just how badly Jarrett can screw up his next order and somehow stay in business. P.S. I wish every season was available on DVD but sadly they only released season 1.
5 people found this helpful

Mikey77Reviewed in the United States on April 6, 2019
3.0 out of 5 stars
Fun show, but typical reality show characters ruin it
It is embarrassing that A&E even let ROY participate in this show. It is really a lot of fun to see how all of the shippers win the bids and get their stuff across the country. However the incessant ranting and insults from ROY get very tired, and although I wanted to watch more episodes, I could only take the ROY factor to 2 shows any one day. I cannot believe that he is still in business with his idiotic bedside manner with the customers (which most of which he seems to hate anyways...just wants the green). Like Storage Wars, ROY is like the jerk DAVE in Storage Wars, so it appears that A&E must hire one jerk at least for every reality show. PLEASE STOP THIS A&E...I do enjoy these shows, but could do without people like this. In the meantime, thanks to Amazon for streaming these shows, despite how awful they can be at times due to poor A&E character choices.
2 people found this helpful

GabrielReviewed in the United States on January 16, 2019
5.0 out of 5 stars
Ignore the complainers, this is a awesome show.
To start off, I can't get enough of this show!
It's interesting the kinds of things that the shippers ship and love the little jabs that they give each other which I see no problem with since they're competing with each other and for quite a bit of money too. It's part of the show the way I see it. I gotta say Marc is my favorite. I just like the attitude he gets when its time to get a load that will pay off and when he does he gives all his effort to complete it which I can really respect.
Too bad A&E decided to cancel after only 7 seasons, such a good show. Quite insulting when you see the kind of trash they have up and running instead.
Also, I see people giving bad reviews because it's a reality show or they think the insults are bad taste but then I wanna ask.. what are you doing here then?

Wendy YatesReviewed in the United States on June 26, 2019
3.0 out of 5 stars
What expenses???
I like the show and I think it is cool to see the things they ship. It seems like everything they say about each other is a cheap catchphrase. It is like they are not talking but saying quips about each other. Since I started binge watching this I have started to notice that. And what is the deal with the expenses??? Season 6, the mini golf episode. Jen had to drive about 900 miles or so to deliver a mini golf course set. At the end of the show it said her expenses were over $1000 dollars. What or how do they calculate these expenses??
2 people found this helpful

Chris94Reviewed in the United States on February 8, 2019
5.0 out of 5 stars
Good show.
Good entertaining show, definitely my favorite of the reality shows on A&E. Cast is solid and funny, at least until season 6 when Roy died and Chris and Robbie are replaced.
Note, if you do have a TV subscription you can watch all the season on the A&E app, instead of the 2 or 3 on here.
4 people found this helpful

Bucky BadgerReviewed in the United States on May 14, 2020
5.0 out of 5 stars
Entertaining Show - Definitely Bing-Worthy
Definitely a fun show to watch, binge worthy mindless TV at it's best. Yes, it has all the typical character development of your average reality show. Regardless, it's interesting to see the process, problems, and profits these independent haulers go through. It's also interesting to see some of the unique items they are contracted to ship.
One person found this helpful

Momma SReviewed in the United States on February 11, 2020
5.0 out of 5 stars
Missing Roy
I love the show. I Can't Get Enough. But the problem is I'm looking to see where Jen give Amish to. I Roy season 6 episode 10. That's when YouTube is telling me. But when I go look for it, it's not there. It's telling me it's fire truck and something else. On season 6 I just want to see. A & e Do something for Roy? Great guy Heart of Gold But his attitude stunk can't get enough of him know. Nickel holding up a dollar Let's go. Why is season 5 not on here and I am missing something on you tube it says season 6 episode10 just like Roy but it's not that at all

Big DougReviewed in the United States on February 21, 2021
2.0 out of 5 stars
So...is this what REALITY shows are really like??? reality??
I watched this for a few shows due to the attractive girls and there spirt of competition against big belly truck drivers. It should be just them with there own company together...NOW that I would enjoy despite the ridiculous acting from the customers and the stupid catch phrases.
See all reviews
Back to top
Get to Know Us
Make Money with Us
Amazon Payment Products
Let Us Help You
EnglishChoose a language for shopping. United StatesChoose a country/region for shopping.
© 1996-2022, Amazon.com, Inc. or its affiliates