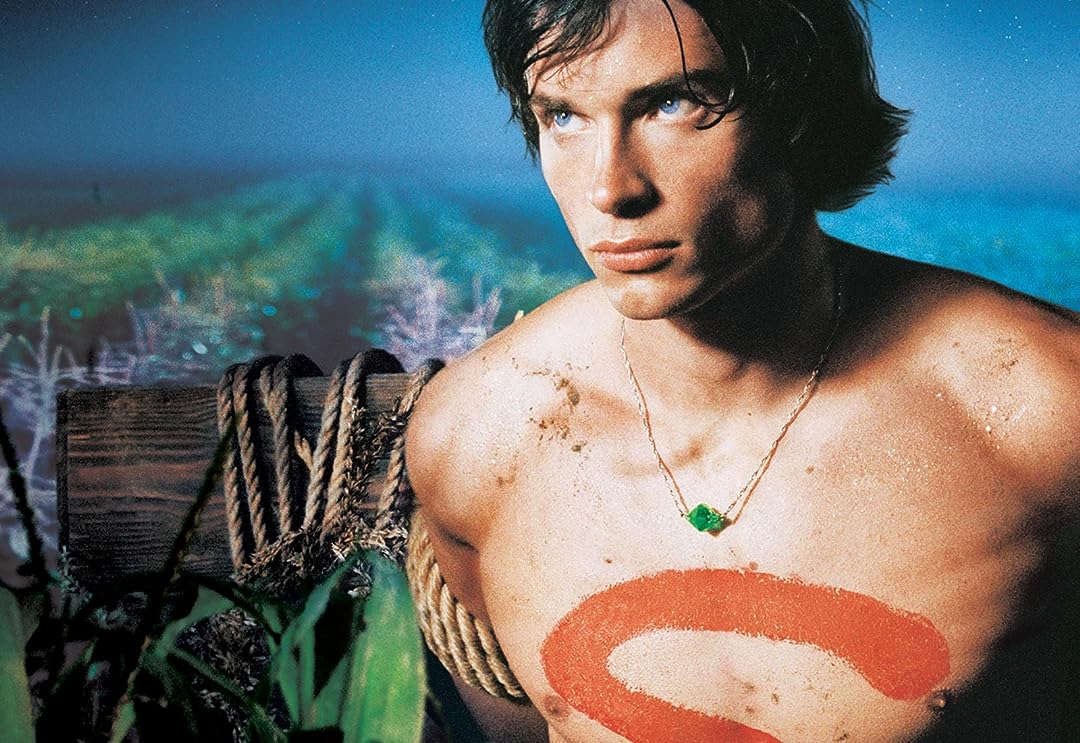 (1,494)
7.5200213+
Clark Kent takes on a whole new dimension in this precursor to the Superman legend. You know how the story ends; now watch the journey begin. The idyllic town of Smallville, Kansas, never seemed the same after the meteor shower…

MarlonReviewed in the United States on June 5, 2016
5.0 out of 5 stars
This show can save lives... it saved mine.
Verified purchase
I remember when I first watched this show years ago when I was a teenager. This show helped me fill the absence of both my parents in my life, made me wonder about "Clark", the character of Tom Welling, and imagine how it would've been to have both my parents present in my life the way "Martha" and "Jonathan Kent" were in his life; moreover, the wisdom and the way Clark's parents helped him develop his character and control himself is amazing. I believe this is the exactly depiction any comic book fan had imagined a young superman have, the presence of a loving, caring family, loyal friends, the platonic love of a young man, the natural challenge of being and growing among teenagers, a friend who eventually turns out to be not much of a friend (Lex) and everything spiced up with a lot of GREEN KRYPTONITE and a bunch of freaks who pop up from nowhere. I'm not even gonna start with the soundtracks and their good timing... it's like at the end of each episode you feel like a part of you is being dragged to the screen and suddenly you ARE the characters. When I was a teenager I used to see the world in a wrong way, even though I was already a superman's fan the show's perspective was so intense that it made me realized how worse my life could've been and made me more thankful for what I have and not what I don't have, eventually I stopped hanging out with the wrong people and doing bad things. This show can guide someone by teaching wisdom and humanity through the powerful characters in it, therefore saving lives. It certainly saved mine.
36 people found this helpful

BrandonReviewed in the United States on June 24, 2020
5.0 out of 5 stars
A timeless show that everyone can relate to.
Verified purchase
Its unfortunate that there's no blu ray version of seasons 1-5 (season 6 to 10 have them thankfully) however, I'm still amazed by the quality most of the time, particularly on close ups, and have trouble believing that this season came out 20 years ago in 2001! I feel like the first dvd out of the 4 disc set has the least impressive quality as most of the artifacts and over-saturation is visibly present. I dont know whether this is the case but it seems as though there are minor improvements as you switch and watch through all of the dvds in this set as slowly the problems werent as apparent. When I compared the last episode, 21, to its first episode, there were clear improvements which were not major but still noticeable, particularly in how much better it looked. For reference, season 1 was filmed in 1.78:1 amamorphic wide-screen but can be converted to full screen with the proper TV/DVD player. Sound quality is decent as its a regular 2 channel stereo that can be transformed to a 5.1 if your receiver is capable however, even if its not then its at least still better than the original broadcast sound as most DVDs are.. As for the story.. I admit that its not perfect in this season as there are a lot of "freak of the week" episodes that don't contribute much towards Clark or his origins. I do give the show credit for having great and likeable characters with side plots that really make those filler type of episodes very enjoyable. I felt myself feeling very Sympathetic towards our main character Clark (played by the handsome Tom Welling) throughout the season and had high hopes for him as well as to see the downfall with him and Lex. He's not exactly the outsider or loner as the comics/other media portrays him but he has many problems that I think are relatable and makes the writing feel quite dynamic. After seeing the final season 1 year ago (late 2020) I think all 10 seasons are binge worthy and worth it in the long run. Season 1 is the introductory season so as such it starts off very tame and slow with as mentioned before many filler episodes.. it might be your thing or it might not be but looking back what I love the most about this season is just that, how simple and tame everything is... later seasons have so much going for them but its just amazing to see how it all started and how it ends up being so much more complex. As mentioned before, there are 21 episodes in this season that ends with such a great cliff hanger which only picks up as season 2 more than improves everything about the show and characters with a season long arc.
3 people found this helpful

Valerie L. HoganReviewed in the United States on March 22, 2018
4.0 out of 5 stars
Not as dark as shows nowadays
Verified purchase
Good older show. Not as gore and violence ridden like most shows nowadays. Bought it because my kids like super hero stuff but after watching it I have determined that it has too much adult content and innuendo for them until they get older. Not sure what to introduce them to in the super hero realm that is light on the violence and doesnt attempt to introduce them to sexual subject matter and alternative sexual orientation at there current age. Had to take them off of all wb shows due to their agenda on subject matter
15 people found this helpful

PARISRUNWAYReviewed in the United States on November 24, 2016
5.0 out of 5 stars
WOW SMALLVILLE EPIC!!!
Verified purchase
All I can say is wow!!. This show is epic!! No other Superman show or movie can compare to the greatness of Smallville. Infact no other superhero show can compare either. Tom Welling puts such feeling and emotion into Clark Kent, really bringing him to life. Smallville has people from the other Superman movies starring in here or guests appearances in the show as well. Of course DC comics was involved giving insight. It's pretty epic and well thought out. Of course there are very important episodes explaining his past and who he is, as well as Clark experiencing life and life choices in other episodes. Alot of tie in's explaining how and why things came to be when he will one day be superman. I started renting Smallville via Netflix DVD via the mail. I was halfway through season 2. It was just taking too long for the turnaround time from Netflix. I couldn't wait any longer. I went and bought all 10 seasons on Amazon HD video at $29.99 each. I couldn't be any more happy. Best money I ever spent. I still continue to watch. Thank you Tom Welling, cast, and crew for bringing us Smallville. This show holds a special place in my heart. Highly recommend, you won't be disappointed guaranteed.
8 people found this helpful

J. WelchReviewed in the United States on May 21, 2021
5.0 out of 5 stars
Great show these first few seasons - bar none
Verified purchase
Just watched it today and the DVD holds up very well on my blu-ray player and smart TV; the imagery and resolution are "super" nice on these discs. Anyone who has not seen the show "Smallville" should. It was not the first superhero show by any means, but it was the first of a reboot phenomenon that gave way to the DC Universe's television franchise. Without Smallville, the current shows would most likely not have commenced: Gotham, Arrow, Flash, Supergirl, Legends of DC.. they were all given the chance and the way paved by the success of Smallville.
The first few seasons of Smallville were some of the best of television series in general; not saying you won't enjoy the later seasons, but the first three seasons of this show were addicting and compelling. The atmosphere and story weaving; the character development and cinematography were spot on. Give it a try if you haven't seen it or another try if you haven't seen it in a while. It is worth it. :-)

TeriReviewed in the United States on June 7, 2021
5.0 out of 5 stars
SMALLVILLE: SEASON 1
Verified purchase
Meteor showers in Smallville. Kal-el (Clark Kent) sent to Earth by his Krypton parents. Clark dioscovered and adopted by Martha and Jonathan. Stories of multiple events and effects of green rocks to the people there. SMALLVILLE is story of Clark Kent's life before he became Superman. All the actors are perfectly chosen for their roles. I just love looking and watching the young/innocent Tom Welling. He is the perfect Clark Kent.

NightFlower37Reviewed in the United States on January 30, 2017
5.0 out of 5 stars
Loved it!!
Verified purchase
I missed Smallville when it first came out, so now playing catch up with the sci-fi shows I missed. So glad I made time for this one! I was afraid that it would be shallow and predictable, but was determined to at least make it through the pilot...and was delightfully surprised. Smallville is a captivating story of the development of a superhero and very entertaining in a "coming-of-age" sort of way as well with a great cast and storyline and an ever-broadening horizon. We can all relate to being awkward teenagers at one time...just glad I only had my problems and not Clark's!
4 people found this helpful

T. SaporitoReviewed in the United States on June 22, 2016
5.0 out of 5 stars
As a Superman fan, I highly recommend this purchase
Verified purchase
As a big fan of the Superman movies and cartoons, I was very excited when the television show, "Smallville" first aired. For those who don't know a lot about the television series, it gives you a look into Clark Kent's life as a teenager in the town of Smallville. This precedes any "Superman" timelines, so it's more about Clark Kent slowly discovering his capabilities all while trying to maintain a normal life as an everyday teenager. This obviously doesn't go very smoothly and leads to some interesting situations. The villains are typically always people that were 'infected' by the kryptonite that landed in the area when Clark's spacecraft crashed years earlier. The earlier seasons are fantastic, the show starts to lose energy in the later seasons and the plots get a little confusing. If you want to know anymore about the show then you should definitely purchase this DVD set and start watching right away. I highly recommend this purchase.
3 people found this helpful
See all reviews
Back to top
Get to Know Us
Make Money with Us
Amazon Payment Products
Let Us Help You
EnglishChoose a language for shopping. United StatesChoose a country/region for shopping.
© 1996-2021, Amazon.com, Inc. or its affiliates