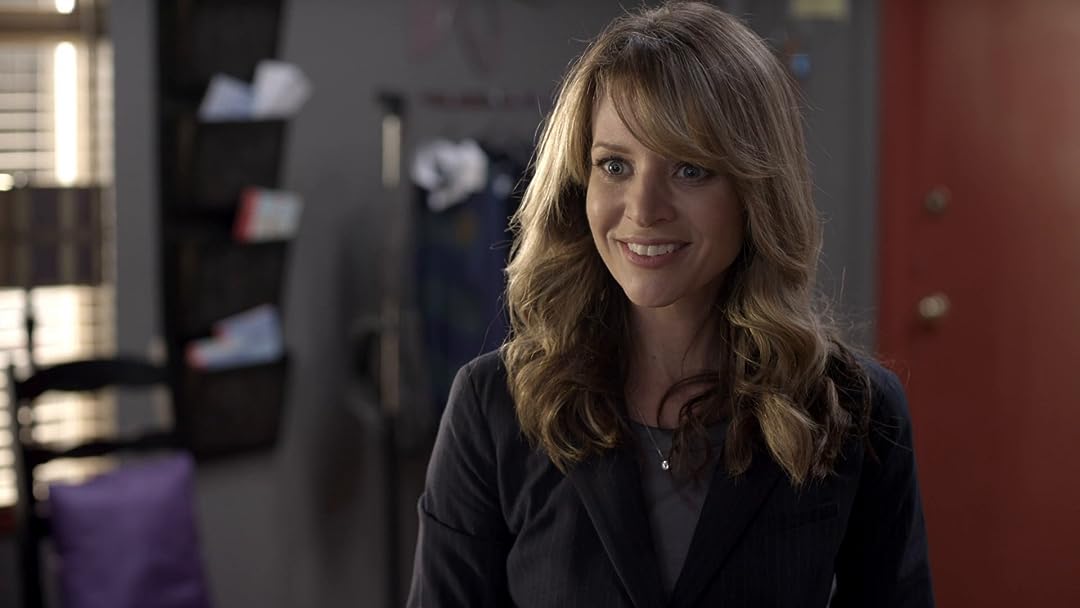 (167)
6.01 h 26 min2012ALL
A high-maintenance realtor forced to do community service must lead a group of hopeless girl scouts in the regional cookie drive competition.

Rentals include 30 days to start watching this video and 3 days to finish once started.

Included with Hallmark Movies Now on Amazon for $5.99/month after trial

Watch with Hallmark Movies Now
Start your 7-day free trial
Add to
Watchlist
By ordering or viewing, you agree to our Terms. Sold by Amazon.com Services LLC.
Write review

John E.T. BlanchardReviewed in the United States on March 5, 2020
5.0 out of 5 stars
Quirky Hallmark Hall of Fame movie around the Girl Scouts Centennial [B.S.A.'64]
Verified purchase
Quirky Hallmark movie around the Girl Scouts Centennial - it also feels a lot like TROOP BEVERLY HILLS. No matter , I enjoyed them both. My background is Psychology; it makes me sad to see the dismissive comments about SMART COOKIES. It's not a G.S.A. TRAINING FILM, it's entertainment - and the basis for discussions about it's strengths - and perceived weaknesses. The girls wound up becoming more than the sum of the Girls - they GREW into a Troop/Family despite the odds (including Julie - who also grew into a Girl Scout.) The movie is what YOU make of it, not just what you watch. Even TROOP BEVERLY HILLS grew. No matter how unorthodox they seem, every girl who wants to be a G.S.A. should be given the chance to join and grow [same with boys and the B.S.A.] - urban, suburban or rural.
One person found this helpful

Shelly JReviewed in the United States on August 3, 2017
3.0 out of 5 stars
Just ok, not a good representation of GS
Verified purchase
This movie is just ok. It's a watered down Mighty Ducks kind of story. I'm a big fan of cheesy Hallmark movies, but this one was a let down.
I would give it a 2 but my Brownies and Juniors said they liked it, and they did sit through the entire movie, so I gave it a 3.
If you have Scouts that want to see it, it's worth the $5 to rent, but not $15 to own. I think I paid $10 for my copy a year ago and now that I've watched it once I'll probably pass it along to another leader.

We thought it was going to be much funnier. My girls were bummed there was no kiss at the end (from the grown ups). And as others have noted, nothing that happens in this movie could actually happen in real life. I don't expect Hallmark to sit down with a copy of Volunteer Essentials and follow all the rules, but the cookie booth thing, the money at the end, the prize getting taken away - none of that makes any sense. The rival leader is mean, she needed to be more ridiculous to be funny.

Butterflymom54Reviewed in the United States on March 8, 2018
5.0 out of 5 stars
A smart movie with Real appeal
Verified purchase
Great Story! Love Bailey Madison in almost everything. I was never a girl scout but my niece was. After reading the critical reviews I still loved the movies but they made sense. 5th girl should have been on the cover. I really think her scene where she answered the phone then called out 3+2, with a view, was to show she may be a future realtor. I am not familiar with the semantics of the Girl Scouts but I can perceive the pride they have and I agree that the way the other scout leader conducted herself probably is not truly reflective of the GSOA. However movies are made with an objective in mind and this one was obviously made to honor the GSOA but also to show how to rise above one's limitations and be all you can be. Either love it, or don't. Enjoy!!!!
One person found this helpful

RayneReviewed in the United States on March 6, 2019
5.0 out of 5 stars
Great story/message; actors very good
Verified purchase
Really cute story and great acting. Many say this story depicts a leader who may be a little over zealous, but being a leader myself, I find it entertaining that a character like this was written in. I'm sure there are some leaders that are closet over achievers and compete with other troops such as depicted in this movie. We know there are scout parents like this! Other viewers comment on how unrealistic the cookie boothing may be in this movie, or how inaccurate the process may be, but it IS a just a movie, not a narrative. Overall, its a cute movie, with adorable characters, a great "sister-hood" & hardworking message. Movie especially great for Girl Scouts to view before annual cookie season.

Joel Menachim ShearerReviewed in the United States on June 28, 2021
5.0 out of 5 stars
Acting made the difference
Verified purchase
This story has been told and retold in film. But these actors shone: every one of them. The emotional connections of the girls, their leader, and her boss were palpable. Daisy's father and Frank's grandmother were well drawn, not just plot-point fixtures. Well done. Very well done.

RissiReviewed in the United States on August 6, 2013
4.0 out of 5 stars
Cute and Witty as its Leading Young Star
Verified purchase
Celebrating a centennial event last year inspired this telefilm starring the always adorable Bailee Madison ('Once Upon a Time') and telling a surprisingly cute, if not common story centered on the Girl Scouts. It's a script that left me thrilled to pieces by its endearing prowess at its conclusion.

Moving from no-where-ville Alaska to a smaller community that actually has a population seemed like a good idea at the time. With a move comes the opportunity for young Daisy (Madison) to make new friends - which is just what her father wanted for her, but she soon realizes that she is quite unprepared to hold together the barely there girl scout troop 114 when the gang of misfits have no leader. Yet, the job falls to her. Enter Julie Sterling (Jessalyn Gilsig), a determined real estate agent who's made her living lying to clients just to get prestigious titles and enviable promotions. Much to Julie's dismay, her boss (Patricia Richardson) - who just happens to be a former troop herself, volunteers Julie to lead the Fireflies as a part of a community outreach. Now instead of neat showings and a perfectionist lifestyle, Julie is car-pooling and trying to lead a group of girls who are each struggling with feelings of being invisible or challenges at home.

Julie Sterling, saleswoman extraordinaire may have met her match.

Writers - whether they are of the publishing or screen sector, seem to lack brilliant or even mediocre approaches when it comes time to wrap a story; writing really good endings to otherwise sweet stories seems a failing these recent years. Coming from a girl who actually likes fuzzy romantic comedies (even those awkward television films - clearly this movie is proof!), there seems to be an even worse decline when it comes to ending movies. Specifically speaking of this film, I thought it hit all the right strides - there was cuteness overload, lessons learned, a group of kids learning self-worth, and then just when you are nestled in that cocoon of sweetness and goofy grins, comforted that there actually are movies you could show to a ten-year-old, the movie loses it. Like, why-is-are-the-girls-crying, running-after-a-bus losing it. The whole ordeal seemed overly dramatic and more of an awkward scene meant to inspire emotion - what writers tried to do and what they didn't do are two very different things.

Distracting from the usual flaws is a fun cast! Though unfamiliar with Gilsig's credits, I liked her in the lead role as well as seeing Patricia Richardson in something again - and of course, the always brimming with personality Bailee Madison was adorable in the role of daughter and girl trying to keep together a failing troop. Also in the cast list is Ty Olsson and Michelle Creber. Several instances of the script were fantastic - like the girl's barbs toward Julie (particularly one of them "assessing" whether or not there is chemistry between Julie and a romantic interest) or the mishaps in the house showings, and then there are the commonalities that an audience pegs long before even the story is ready to reveal them. Once all is said and done, this is a darling charm of a movie. It's got some pizzazz and there are no "baddies" to wish ill-will on. (For a crime-loving fandom girl like myself, that can sometimes be a welcoming breath of fresh air!) It's sassy and sweet - kinda' like a thin mint cookie.

© Copyright 2011-2013 Dreaming Under the Same Moon / Scribbles, Scripts and Such

Uncle GrumpyReviewed in the United States on August 20, 2013
3.0 out of 5 stars
A bit overboard in the competition
Verified purchase
We all know people like these and even find ourselves falling into some of the competitive traps, on occasions. This had a delightful cast and a clever plot, but I wish the competition had been toned down and the entire theme had not been quite so extreme. It seemed to go much too far and make fun of any and all the features of Scouting, environmental care, and all the other kinds of things that were part of the story.
10 people found this helpful

NaturalMamaReviewed in the United States on May 7, 2014
2.0 out of 5 stars
GSUSA okayed this?
Verified purchase
This could have been cute but as a Girl Scout Leader and mom to a Girl Scout, I was appalled at some of the things in this movie. The stereo types were awful, and the way the rival troop acted was disgusting. Why would GSUSA want to portray themselves like this? It really makes us look bad.
11 people found this helpful
See all reviews
Back to top
Get to Know Us
Make Money with Us
Amazon Payment Products
Let Us Help You
EnglishChoose a language for shopping. United StatesChoose a country/region for shopping.
© 1996-2022, Amazon.com, Inc. or its affiliates