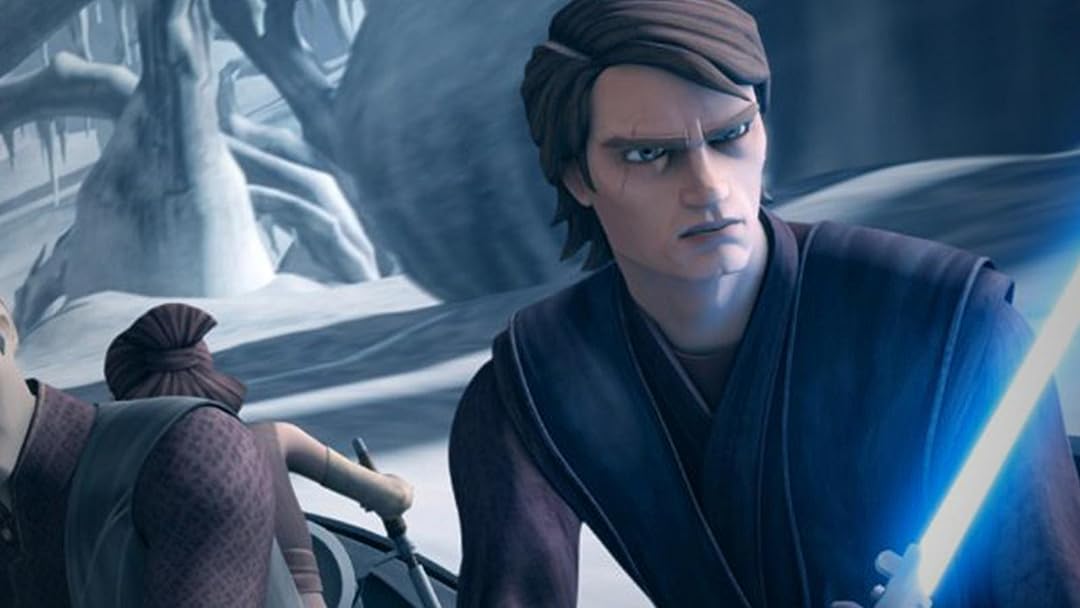 (436)
8.42009NR
Executive Producer George Lucas and Lucasfilm Animation present this ground-breaking series set between Episodes II and III of the Star Wars saga. Each episode is an action-packed adventure that introduces new characters and explores new planets as the Jedi and their valiant clone troopers defend the Star Wars galaxy.

joebobhenrybobReviewed in the United States on January 8, 2019
5.0 out of 5 stars
A very decent Star Wars fix
Verified purchase
a qualified 5 star review

If you're looking for well-done Star Wars content... you've found it!

By 5 stars, do I mean Citizen Kane? Nope. The Empire Strikes Back is possibly the only TRULY great Star Wars movie - and if that ONE movie had not been made, perhaps the whole series would have been considered to be banal B movie schlock with a charming, endearing first episode. Empire gave it gravitas. (sort of how the sequel Aliens was the film that really made the Alien franchise...)

While Clone Wars isn't the Citizen Kane of Star Wars, it IS meat and potatoes Star Wars - which is actually a VERY rare thing. And it actually DOES carry some gravitas occasionally.

It is sort of an inverse of The Last Jedi, in that The Last Jedi is visually the most awesome, most star-wars-y Star Wars there ever was while falling down horribly, disgustingly, in every element of storytelling. Clone Wars looks weird - I can never QUITE get over watching a bunch of bobble-heads in a space opera - but it wins at all the elements of storytelling.

So if you like Star Wars and need a fix - it is certainly worth trying. The episodes are short so you can fit them in between stuff without taking up too much time. They also lend themselves to binge watching if you like that. I'm a few seasons in with no sense of disappointment yet

WhimdipityReviewed in the United States on July 30, 2018
5.0 out of 5 stars
Answers almost any question, explores every relationship, and explores the many reasons why Anakin lost faith in the Jedi.
Verified purchase
This TV series - from George Lucas - tells the in depth story of what happened between the films Attack of the Clones and Revenge of the Sith. Almost any question a fan might have - or things fans couldn’t appreciate fully due to the limited content in the films - is likely answered in TCW TV series. It covers the full range of adult emotions across the Episodes, and it’s pretty hard core and violent in many episodes - it does not water down the content to be “kid friendly”. Stories range from light/humorous to dark/heartbreaking to endearing/romantic to angry/violent.

Key things you learn and see: First, Anakin’s Padawan - Ahsoka Tano. She is introduced in the TCW TV movie that kicks off the series. You see that Anakin’s disenchantment with the Jedi didn’t happen overnight - and was justifiable from a certain point of view. The Jedi Council’s own inner conflict with their effectiveness is explored. The Clones - Rex, Coty and dozens of others are personalized and the depth of the devotion between the Clones and their Jedi Generals is defined. After watching TCW TV series, you’ll find watching the scenes in ROTS where Order 66 is executed are beyond gut wrenching to watch. The actual battles the Clones and their beloved Jedi Generals fought together, the bonds they forged and trust they shared will reveal the unique tragedy and overall gravity of each one of those scenes. You get to know more of the Jedi and how they operate. Anikan and Padme’s relationship gets the attention it needed in the films to be appreciated. The Emperor’s manipulations, Count Dooku, and General Grievous are covered in depth. The Galaxy’s citizens and battles for their planets are necessary viewing to understand the depth of the Empire’s evil. Many other characters upon which books and comics have been based, such as Tarkin, are introduced. Many hints about what is to come in the films are integrated into all of these characters’ interactions.

Yes, it’s CG animation, which I learned means everything about the battle scenes and non-human movement is beyond stellar. The first episode or two you notice the legs when walking/running and mouths when speaking because they aren’t perfect. But then it becomes normal and you literally forget you’re even watching CG - it doesn’t take away from the quality or enjoyment at all.
5 people found this helpful

BH-Kindle CustomerReviewed in the United States on December 22, 2019
1.0 out of 5 stars
Language
Verified purchase
My son purchased this with his own money and he was very disappointed once he started watching it because it had bad language in the movie. He asked me to request a refund. I love his heart, but had to tell him that I couldn't request a refund. I sure hate he spent his money on it.
3 people found this helpful

T. YoungReviewed in the United States on October 14, 2015
5.0 out of 5 stars
Nice to understand more of what happened between movie episodes II and III
Verified purchase
This is a great series, filling in the space between movie episodes II and III. We are using this as a homework reward. When my son gets his homework done, we all sit down and watch an episode. Best motivation I have found yet!
10 people found this helpful

VictorReviewed in the United States on February 29, 2016
4.0 out of 5 stars
Great show!
Verified purchase
Great quality, great show, and have had no issues with the streaming. There are times when the quality isn't as good at first, but it usually improves relatively quickly. It is possible that this can be attributed to my wireless connection also. Giving it 4 stars for this slight difference in streaming quality at times, but overall I am very satisfied.
3 people found this helpful

valjeanReviewed in the United States on September 9, 2013
5.0 out of 5 stars
May the force be with you.
Verified purchase
I waited until several months ago to give this series a try. I was put off by the animation style as well as the idea of Anakin having a padawan. It seemed like a silly idea, purposely directed at children. Boy was I wrong.

This series is one of the finest testaments to Star Wars. It is an expertly crafted story with the same quality you would expect from any Star Wars production. Whomever created this series put their heart into it. On many occasions this series outshines the movies in both story and even visually. I have watched all the way up to Season 5, episode 20 and I feel privileged that I got to see it. I almost don't want to finish the final episodes because then I'll have to wait. I've no doubt I'll rewatch this series again soon once I do finish it.

When I first read the reviews I saw people raving about how their children love this series. Don't be dissuaded by this. This series will be equally appreciated by adults and at some points I'd mark it around PG-13 in terms of content. The dialog is also written in a way that it will be enjoyed by all ages. I also hope the parents of those children are lucky enough to watch this series as well. It's one heck of a treat for anyone who enjoys Star Wars.

Well? Why are you still reading this? Go buy it. Get the HD version as well. I purchased the Standard version for Season 1, but HD for the rest and, oh my goodness, was it the right choice. Some of the battles could only be fully appreciated in HD.
19 people found this helpful
See all reviews
Back to top
Get to Know Us
Make Money with Us
Amazon Payment Products
Let Us Help You
EnglishChoose a language for shopping. United StatesChoose a country/region for shopping.
© 1996-2022, Amazon.com, Inc. or its affiliates