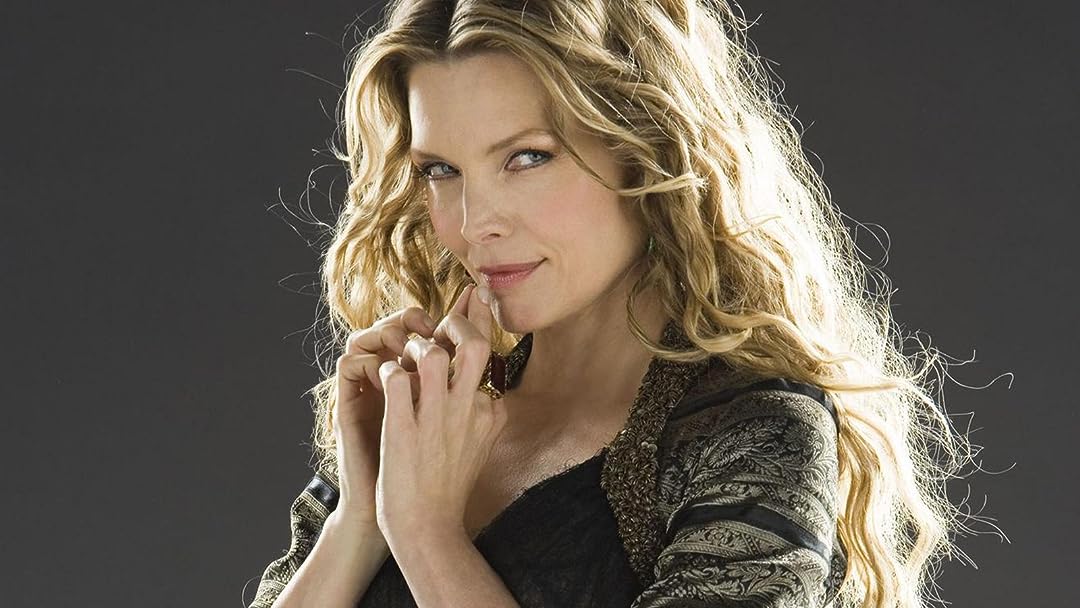 (7,953)
7.62 h 7 min2007X-RayHDRUHDPG-13
In hopes of wooing a girl, Tristan promises to bring her a falling star. He soon discovers the star is actually a celestial beauty named Yvaine. When an old witch Lamia attempts to steal Yvaine’s youth, Tristan must protect her.

ksReviewed in the United States on November 16, 2017
5.0 out of 5 stars
An Exceptional Fairytale Treat For The Whole Family
Verified purchase
Stardust is a magical fairy tale for the whole family.
I love Claire Danes in everything she does, and she certainly doesn't disappoint here, glowing becomes her.
And, despite other reviewers criticisms of Charlie Cox as the male lead rather than a more well-known actor such as Orlando Bloom, Cox holds his own and shines exceptionally strong in this delightful storybook adventure.
Every supporting actor, from Michelle Pfeiffer, Mark Strong, Peter O'Toole to Ricky Gervais, contributes in a special way, truly captivating and transporting the mind and heart.
But truth be told, in the end, I think it is Robert De Niro that steals the show. Clothing diva fashionista and hairstylist conniosseur extraordinaire De Niro hits the funnybone with just the right beat. The best of all is when he dresses up in makeup and women's clothing, flutters his feather fan and pirouettes around his ship's cabin all while classical music is thundering in the background. Spectacular! What a good belly laugh! Absolutely marvelous!
For a delightful movie-night-in with the family, every age will find themselves smiling ear-to-ear throughout, and dreaming swashbuckling dreams of their own.
Grab the popcorn, you're in for a treat!

H. M. HadleyReviewed in the United States on July 22, 2020
1.0 out of 5 stars
Dark, Cruel, Mean-Spirited
Verified purchase
Sorry I watched this--it's emphasis on the casual cruelty to humans (and worse, to animals!) was so disturbing that I kept fast-forwarding to try to get to a few pleasant scenes. If you have a compassionate heart, you'll find some of the scenes just traumatizing and wish you could get them out of your head. The humor was crude, the romance was shallow, the magic was violent, and the background music ground out so loudly at times that I had to increase the volume to hear the dialogue. I think this movie was sold based on the big-name cast members, but it was a waste of their time and talent. There are so many better movies out there that you can end up feeling good about watching that I urge you NOT to give a moment's time to this. Even if you're curious, you'll end up disappointed.
13 people found this helpful

Brian K. MillerReviewed in the United States on April 18, 2020
5.0 out of 5 stars
A genuine Masterpiece
Verified purchase
I bought the book the day it was released in Tokyo, Japan. I have long been a Neil Gaiman fan and this book did not disappoint.

Now, it is important to remember that books and movies are two completely different forms of media. That is why so many people hate one and love the other.

Taking this movies strictly on the standards and demands of visual media, it is as much a masterpiece as the book! It opens slowly, develops in unexpected ways (even after reading the book!) and never fails to surprise. Several of the characters are interpreted differently than I would, but to my great surprise that added to their value rather than detracting from it.

One of the finest movies I have ever seen. I would recommend it to anyone of any age.
10 people found this helpful

EllisScottPollardReviewed in the United States on May 23, 2017
5.0 out of 5 stars
A Magical Milkshake: Blending High Fantasy with Fairy Tale Tropes
Verified purchase
Stardust is perhaps the greatest high fantasy work thus far in the Post-LOTR era. There are other fantasy movies that rank very high, but, in terms of the high fantasy genre, it's beyond reproach. The key to the film's entertainment value and artistic success is that it blends the conventions of its genre with those of larger-scale fairy tales. The narrative is structured around the poetic concept of following a shooting start...but in a very literal sense. A dispute over sovereignty of a magical realm leads to knocking a star out of orbit (it makes far more sense in the film). The star, anthropomorphized and portrayed wonderfully by Claire Danes, becomes the sought after person of interest for a Earthen boy (Charlie Cox), a family of scheming and merciless princes vying for the land's throne, and a triumvirate of witch queens who seek the star's heart to return them to their former power and beauty. I'm making it sound very simple, but their's so much depth and play at work in this very well-polished piece. The fantastic visuals, gorgeous cinematography, and absolutely magnificent score each glisten individually, but they meld together to make a triumphant contribution to fantasy film and what we should expect from filmmakers working in the genre. The script is as concise as it is rich with intrigue and thematic exploration: employing the motifs of a veritable encyclopedia of magical conventions and always imbuing them with beautiful newness. It's exceedingly difficult to make a young man's transition from small-town everyman into romantic-warrior believable, but this film achieves that so well with Charlie Cox's splendidly written and phenomenally acted performance. As I mentioned, their are three major plot-lines that all focus on the Claire Danes's fallen star character, Yvaine. The princes of the land seek the king's necklace, which would give one of them sovereignty over this fable world of Stormhold. Each prince is villainous and willing to kill his brothers for the crown. Mark Strong plays the most intense of the brothers, and his performance, like those of the other brothers, is full of murder contrasted with elements of comedy. The previously discarded princes are cursed to a ghost state until the necklace is claimed, and they provide wonderfully dry comic relief. There are a number of cameo appearance by actors like Rupert Everett, Ricky Gervais, and Peter O'Toole, but, if they are to be defined as cameos, they are the most natural feeling kind of appearances--never detracting from the story but adding to it. Michelle Pfeiffer almost steals the show as Lamia, the most evil and powerful of the three witch queens. Always a consummate professional and rightfully ambitious actress, Pfeiffer's Lamia is an evil mastermind, a cunning warrior, and a villainous sorceress par excellence.

The only real flaw I find in the movie is surprising Robert De Niro's character, a secretly gay air-pirate. The character is written in a way that is hard not to see as willfully parodying gay men. I don't know that I'd call it a homophobic portrayal necessarily, but it does hearken back to foppish stock characters. There is nothing wrong with what we might call a more effeminate gay man, but there is very little by way of plot to suggest validation of the character's true self, choosing rather to make him a long-running gag character (though he is essential to the plot). With the three overlapping quests of Charlie Cox's young hero, the prince fraternity, and the witch sisters, the narrative is able to intersect them is so many different ways--all of which are entertaining and artistically reverent to the fantastic. The film does an excellent job of ranking the threat level by making Lamia's quest more covert, and thus more dangerous to anyone standing in her way. The revelations of the conclusion are so beautifully done and presented in a natural way. It's undoubtedly a fun film, but I'm very proud of its artistic merit. The film never seeks to cash in on those craving fantasy narratives: it only adds richness to the genre.
21 people found this helpful

Pen NameReviewed in the United States on October 2, 2021
3.0 out of 5 stars
Excellent casting with a somewhat mediocre storyline!
Verified purchase
This film is just bizarre. Twenty years ago, a young man from an English village sneaked into the forbidden neighboring fantasy realm next door, where he got a slave girl pregnant, and nine-months later he received his newborn child on his doorstep. Jump ahead to today. That now grown-up child, named Tristan (Charlie Cox), sneaks into the fantasy realm to bring back a star to impress his would-be girlfriend. Once there, he discovers that the star he seeks is beautiful blonde Yvaine (Claire Danes), who falls into his hands. Meanwhile, there's a cruel old dying king (Peter O'Toole) who now requires an heir (up until now, he's been allowing his seven sons to murder one another, until only four remain alive). The king decrees that whichever of his surviving sons returns with his magical ruby will inherit his kingdom of Stormhold. On an amusing side-note, as his sons are killed off, they continue hanging around as ghosts! Also, there are these three evil/ugly witches who want to cut out the heart of the fallen star because it promises immortality, and one of them (Michelle Pfeiffer) beautifies herself to go after it. And let's not forget a shipload of air-pirates in their high-flying balloon vessel, along with their crossdressing captain (Robert De Niro), who go about capture lightning in containers, which then then sell to Ferdy the Fence (Ricky Gervais). This whole storyline is just completely bizarre!
2 people found this helpful

Heidi JohnsonReviewed in the United States on October 16, 2017
5.0 out of 5 stars
Look, if it's not your cup of tea, just avoid it and leave the rest of us to enjoy this interesting and fun film.
Verified purchase
I don't usually go as high as 5 stars but this movie deserves it or at least 4.5. I have two words that say it all - Neil Gaiman. If you like his stuff (weird, irreverent, and delightful), you'll like this plus enjoying the wonderful actors like DeNiro and Pfeiffer and the excellent production values. As you can see from the negative reviews, several people objected to witches and satanic references. If you're going to be sensitive to these subjects, DON'T WATCH IT. Most of us found the film to be very enjoyable.
14 people found this helpful

DietrichsReviewed in the United States on January 16, 2017
5.0 out of 5 stars
Stardust will sparkle in your eye
Verified purchase
When "The Princess Bride" and "The Never Ending Story" had a kid, it's name was "Stardust." This is a wonderful mystical story of a boy learning to be a man and love a woman and not a girl. The humor, wit and charm throughout the entire movie are perfectly orchestrated and this has become a movie I love to watch.

I would recommend this movie for anyone as there are great story lines, excellent acting and wonderful lessons of love and life that can be learned from such an excellent movie.
16 people found this helpful

AnnaReviewed in the United States on January 17, 2021
5.0 out of 5 stars
Love, Love, Love
Verified purchase
So Happy that I got this back! I was so sad when it burned so I had to replace it, sadly the video store near me didn't have it so I turned to Amazon. I love this quirky & unique movie. First thing to know is they aren't shy with death in this movie, but don't worry it's not like a horror film. They even make the deaths in the movie funny (At least I laughed). This movie is unlike everything I have seen. There is romance, adventure, royalty, pirates, witches, a horrible girl named Victoria. I also just learn that there is a book for this so I will be looking for it.
2 people found this helpful
See all reviews
Back to top
Get to Know Us
Make Money with Us
Amazon Payment Products
Let Us Help You
EnglishChoose a language for shopping. United StatesChoose a country/region for shopping.
© 1996-2022, Amazon.com, Inc. or its affiliates