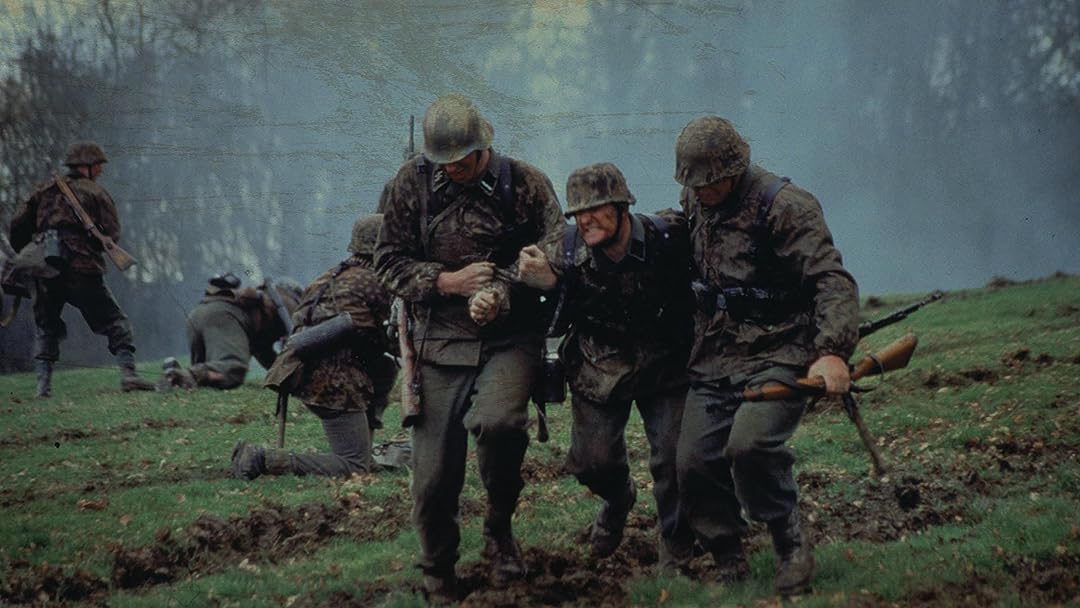 (72)
3.61 h 25 min200013+
December 1944, the Battle Of The Bulge, a bridge in the Ardennes. The war is all but over, but for this German unit the battle is just beginning. "Steel Tempest" is the harrowing story of a German unit's mission to take a bridge during the Ardennes offensive, Hitler's last Blitzkrieg. All is clearly lost, but the Commander continues to fight in the face of overwhelming Allied superiority.

For a while I was considering that this was some kind of SNL spoof. Then I thought was some revisionist right-wing "most of them just wanted to protect Europe from communism". After a while I wasn't sure. My best guess is a WWII re-enactor group decided to make a 1970's British WWII movie but from the German point of view. Maybe someone played a lot of Squad Leader in the 1980’s with a lot of reproductions on the walls. After a while it does settle down and become a 1960’s/70’s grade WWII film with that level of plotlines but telling the story from the German point of view.

I can say about it is that it stays true to the narrative it’s trying to tell. The plucky Waffen-SS so low on fuel and ammo just wanting to “win one more time” so they can do a 180 and protect their families from the hordes coming from the east. You do see two classes – the fanatics who believe in the fuher and final victory and the realists who know the sun has set on the German army being able to defend its own borders let alone venture outside and hold ground.

Like many low-budget films of this nature the army is full of 45 year old privates. Yes at this time the Germans had 17yr and 40yr old soldiers fighting but these units would have been a younger. Get some re-enactor people with pretty accurate clothing, find some working vehicles and CGI the hell out of the rest as best you can. Not much real pyrotechnics or even rifles firing – even a grenade going off is CGI at about the level of a good XBOX game.

Things to look for – stock footage of captured African American soldiers during the battle of the bulge. They are from the unit that had men captured and the executed in a brutal fashion – Sepp Dietrich was tried and convicted of this. You’ll hear his name mentioned early in the movie warmly by the lead fatherly commanding office – like a dear uncle he hasn’t seen in a while. They do show some of the SS executing captured soldiers and a German cameraman calls out the men who do so. The German cameraman sent along repeatedly calls out the troops who execute captured allied soldiers.

Some praise – the fact that someone actually made this. I don’t know how it was funded but I suspect it came out of a lot of pockets. Not sure how you could recoup the costs. Impressive that it actually got done. I suspect we will continue to see more storytelling of this nature going forward. WWII\military passion projects. There’s an audience for this stuff – I’m one of them and you really don’t see any good WWII movies\shows all that often.
Some more praise – unlike many films like this a lot of the cast has talent and training. It’s not just 3 community theater guys and 50 re-enactors getting time off work. More than a few people in the cast could walk onto the set of a TV show\feature film and pull it off. Also they fact that they use CGI much less than other films like this works in it’s favor. The film works best when it’s not showing anything requiring special effects – the smatterings of CGI work best because they are on screen so seldom. Even the rifles firing look fake sometimes.

Taken as a whole its some dialog\intrapersonal scenes that all considered often work well. The actual action\battle at best is OK and usually feels like re-enactors hitting the forest preserve for a big event. Every now and then you get a little B&W stock footage History Channel style. I mean the old History Channel – not the current double-digit IQ reality shows that you see in the last 10 years.

I think done respectfully a film could tell the story of the German soldier during WWII. It’s hard because at the end of the day they served an evil cause that lead to millions dying and then 50 years of the iron curtain and brutal repression. I’ve seen US Civil War and confederate soldiers shown in a positive light my whole life so it’s not a stretch. We have films where the people who fought to preserve slavery were good people who were just doing their duty and fighting for freedom. This film is set in a battle known for its war crimes (Malmedy massacre) already makes showing the Germans in a sympathetic light all that harder. For good reasons it’s hard to tell the story of the German soldier without somehow justifying or downplaying the truly horrible deeds and goals. Das Boot did a pretty good job. So did Stalingrad – check those out if you haven’t. Also the German TV miniseries “Our Mothers, Our Fathers – Generation War” was pretty good (not a pure military story though).

Bottom line – if you like military history films and you’ve seen pretty much everything but not this watch this. If you’ve only seen a couple of the big ones you’re going to feel disappointed.

The Shoulders of GiantsReviewed in the United States on January 19, 2020
2.0 out of 5 stars
They even ruined the video's aspect ratio
Verified purchase
For some reason, every World War Two-related video that Bob Carruthers' name is associated with on Amazon has had its original 4:3 aspect ratio altered, stretched wide to fill contemporary screens. WHY??? It makes all the people short, fat, oompa-loompas. As everyone else has pointed out, this movie is horribly awful. But on top of the insult of such a bad film, the video is distorted as well, as if your senile great-great-grandpa hit the wrong button on his remote control and can't tell the difference or know how to set it back. AMAZON: STOP RUINING YOUR VIDEOS BY PUTTING THEM IN THE WRONG ASPECT RATIO. It makes me want to watch Netflix instead just to avoid this eye-wrenching brain-draining stupidity of having to look at a distorted image. Seriously, somebody needs to be fired at Amazon for putting this unwatchable garbage online.
3 people found this helpful

cassandratodayReviewed in the United States on January 10, 2018
1.0 out of 5 stars
This was a bad movie
Verified purchase
This was a bad movie. It was supposedly about the Battle of the Bulge, but it got everything wrong except that the Germans attacked, and the Americans beat them back. The real Battle of the Bulge took place in the forest in extreme winter weather; this was set in open fields in summertime. In the real battle, the attack really was Blitzkrieg, led by massive tank formations; in the movie, there were no tanks to be had.

And the actual movie-making... the whole thing was amateurish, like something made by a high-school film class. Oonly occasionally did the acting rise to the level of barely adequate; the direction was... lacking; the storyline wandered all over the place; there were scenes whose relation to the rest of the movie had no apparent point; the writing... I don't know how they could speak those lines without laughing. And as has been noted in other reviews, the German accents grated relentlessly on the ear. The one thing that seemed to work pretty well were the fighting scenes, where filmed scenes were intercut with actual wartime footage, and where handheld cameras were used to reasonably good effect. But that wasn't enough to make the movie worth losing an hour and a half of my life to watch.
12 people found this helpful

Michael NeeseReviewed in the United States on October 10, 2017
5.0 out of 5 stars
like in the movie Patton
Verified purchase
As a student of the German Army in WWII, and as a former U.S. Army Tank Commander and as a friend of the survivors of the German 335th Panzer Battalion based in Bamberg, Germany (Russian Front),I thought the entire scenario was authentic.
And, I mean from the equipment, to the uniforms, to the attitudes of the men and even into the thinking of the men and officers about their Senior Leadership. Yes, their supply issues were this dire.
Did the film resort to historical film for aircraft and King Tiger Tanks? Sure. But, at least they did not paint German crosses on American Tanks, like in the movie Patton.
From speaking to the few survivors and reading many book on the German side? I find this movie incredibly authentic.
Remember, in their minds, they were saving all of Europe, Germany, their Wives and Children.
18 people found this helpful

Road ScholarReviewed in the United States on December 31, 2017
2.0 out of 5 stars
No, not "worth a watch"....
Verified purchase
"Worth a watch"? Maybe a cheap imitation Seiko that you can buy off a street vendor. Got me a Rolex mind, but all I can afford is a knockoff that doesn't work?
That's the analogy here.
Pretty amusing scenes. A squad of German soldiers attack American positions, and run across the screen (left to righ) shooting.
The last guy in the squad has 'potato masher' hand grenades, which he throws forward.....Right toward all the German troops who've just run across the screen! DOH! They use this scene like four times within four minutes. Pretty bad.
Don't waste your time.
Who makes this stuff?
5 people found this helpful

surlyReviewed in the United States on October 16, 2017
2.0 out of 5 stars
Pathetic
Verified purchase
Really, really poor wooden acting and some of the worst fake German accents I have ever come across. Crummy special effects that is supposed reflect combat that just comes across as fake and laughable. I reached my tolerance of what I could accept before giving up after about the first 10 minutes, but I continued to watch hoping I would uncover some redeeming social value hidden I the film. I did not. The only positive I could give this film was the inter-spacing of actual news footage and using the Die Deutsche Wochenschau format.Other than that the best rating I could give this turkey is laughable.
3 people found this helpful

talbot vilnaReviewed in the United States on August 26, 2018
2.0 out of 5 stars
A view from the "bad guys"
Verified purchase
Super low budget war movie from the perspective of an SS unit; Western front; end of 1944. Underlying theme throughout is "defeatism" and lack of supplies. That's a good theme since they're the bad guys. The tension between the unit commander and propaganda guy highlights the absurdity of the Nazi regime towards the end. Defeats are turned into victories.
There is an accurate depiction of uniforms and small arms. Armored vehicles have indistinct markings, which was the real situation. In this sense this film could be a semi-documentary on German weaponry and uniforms.
See all reviews
Back to top
Get to Know Us
Make Money with Us
Amazon Payment Products
Let Us Help You
EnglishChoose a language for shopping. United StatesChoose a country/region for shopping.
© 1996-2022, Amazon.com, Inc. or its affiliates