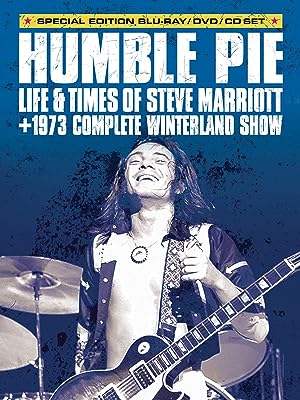 Johann CatReviewed in the United States on January 17, 2022
2.0 out of 5 stars
Thin, amateurish
Verified purchase
Sloppy, haphazard, and despite some interesting background information (especially from Frampton--the best interview in the piece) flatly not a fitting testimony to Marriott's musical legacy or history. It isn't just that it is short--but over half of its run is consumed with late-60s TV clips of Marriott's bands miming (mostly) . But the worst aspect of this is its novice-level editing skills (with Y2K-era flying edits, and other cheap Win 98-looking screen-saver animations) that went into this. Often the screen is pointlessly split between an interviewer, and an apparently randomly-selected, often fuzzy or low res photo of a band member. If this were only the interviews, with fewer interruptions, it would be better. But the technical qualities of this are so low that it diminished the musical history and its subjects. Don't rent it; you could best it by looking around on Youtube; certainly all of the music clips are there. This needed a professional film-maker's advice.

Chris RichardReviewed in the United States on April 19, 2020
5.0 out of 5 stars
Must see!
Verified purchase
If you consider yourself a true fan of Rock music and don't know who Steve Marriott is, then you NEED to watch this documentary. Steve was one of the most highly respected vocalist in rock by his peers. Sadly things never worked out for him to become a superstar household name. But they should have. If you don't know Steve Marriott, you don't know Rock.
5 people found this helpful

Amazon CustomerReviewed in the United States on October 6, 2020
3.0 out of 5 stars
From Small Faces to Humble Pie: What could have been !
Verified purchase
This is a good overall summary of Steve Marriott's career. Sadly, there is not much original film footage concerning the days of classic rock. Numerous groups of this era could have made it to the top but bad management, drugs and inner band turmoil tore them apart. I was about 13 years old when the (Smokin') album hit the market. I still pull it out every now and then and play it. Classic Rock Rules.

SLMReviewed in the United States on May 25, 2022
5.0 out of 5 stars
Great talent.
Verified purchase
This documentary was very interesting. Steve Marriott was a great talent that was lost too soon.

R. RussellReviewed in the United States on December 26, 2021
4.0 out of 5 stars
A surprisingly decent Marriott doc…
Verified purchase
…that will bring to mind the fact that a really good Humble Pie retrospective has yet to be done!

NibbledtodeathbyDucksReviewed in the United States on July 2, 2022
2.0 out of 5 stars
Don't Confuse The Man with The Doco
Verified purchase
This reminds me of the Waldorf Salad episode of Fawlty Towers where the two women guests are eating dinner and one says the food is awful, and the other, trying to be bright, carves a tiny piece out of a chop, holds it up on her fork and says, see, here's a nice bit.

You won't get that attempt at brightness from me -- this thing is a disgrace. The length couldn't adequately cover the making of one Pie album or even a clothes shopping trip by the Small Faces, never mind the career of one of music's most gifted singers and performers. Bad enough that Pie isn't in that damnable RRHOF, but when those Jann Wenner pinheads finally decided that the Small Faces and the Faces should be inducted, they put them both together like some sort of cheap deal at a dumpy discount store. Steve and Ronnie Lane didn't even live to see it. Then THIS is supposed to be a doco that Steve deserves?

The "nice bit" carved out of this rancid pork chop is the revoltingly limited interview footage with Peter Frampton, Rick Wills, Clem Clempson, and especially Simon Kirke, a guy whose socks I'd wash BY HAND, he's one of the best drummers to ever draw breath, and drummers are THE only master race, pass it around. What they have to offer is golden, and from what I could tell, not only severely, but badly edited. Not one word from the Small Faces, or Glyn Johns, who had a colorful opinion of working with Steve, any of the Stones, anyone else you'd need to speak to to do this properly. Some old Beat Club and bootleg footage that just makes you want to cry. Done. Nothing is properly covered, not one element of his life, and he had a hard life, and a passing giggle about him and Stephen Stills going through four fifths of Jack Daniels and a notable snowstorm while working on Smokin' is juvenile and idiotic, especially when you consider the price both paid for their addictions. I'm not talking moralizing, I'm talking ACKNOWLEDGING.

When CDs came out, it was a boon because albums that were long out of print, songs impossible to find, were released, but the bad part was that any piece of badly-reproduced garbage was also put on CD as well. When VHS came about, the same good things happened with films and bootlegs, but a lot of yahoos put down the pipe and straw long enough to make these dreadful "documentaries" on bands that rabid fans would buy, just to see that these tapes were cheap pastiches you were embarrassed to look at. That's what we have going on now on so many of these "specialist" streaming services. If these people can't be bothered or don't have the talent to make a proper film, then just give me the uninterrupted, unedited interview footage with people like Frampton and Kirke. RIP, Steve.


One person found this helpful
See all reviews
Back to top
Get to Know Us
Make Money with Us
Amazon Payment Products
Let Us Help You
EnglishChoose a language for shopping. United StatesChoose a country/region for shopping.
© 1996-2022, Amazon.com, Inc. or its affiliates