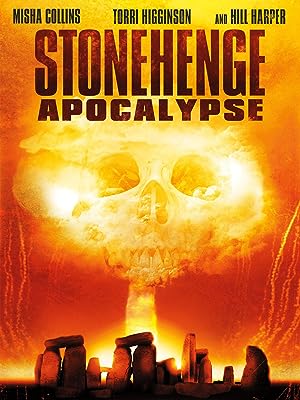 (537)
4.21 h 30 min2010PG-13
When a disgraced scientist discovers unusual spikes in the Earth’s electromagnetic field emanating from Stonehenge, it is up to him to warn the world of a possible apocalypse.

Linked Universe Discord Movie ClubReviewed in the United States on November 6, 2021
5.0 out of 5 stars
-Slaps Movie- This Movie Can Hold So Much Movie In It
Verified purchase
“It’s something that I viewed with my eyes!”

The Prophecy. The Pyramid In Maine. Electromagnetism. The Solution Is Always Nukes. The Apocalypse Cult. Superhell. It was a ROBOT HEAD.

The only thing that could have improved this movie experience is the inclusion of the Bass Pro Pyramid. What’s even the point of it without it. Smh 4/5 stars.

This movie is about as comprehensive as the movie is so please watch it now.

XanderReviewed in the United States on January 14, 2018
5.0 out of 5 stars
If you like this genre, you're going to love this movie. No riding around in a car forever trying to find the lost kid.
Verified purchase
Love the genre and this one doesn't disappoint. Sure, it's a little illogical at times. Going from Maine to Stonehenge so quickly, even with a "supersonic jet"... Well, but that's what we expect from movies of this genre, and this one has it all! Pyramids turning into volcanoes, archaeologist turned cult leader trying to destroy the world faster than whatever Stonehenge is doing. Coolest part, Scifi folks will recognize at least one major player in the movie, Supernatural fans will be thrilled with another one. And once again, a "fringe scientist" who's been disgraced has a chance to prove himself. Only problem is... is there time? I recommend it. At least you're not riding in a minivan with some cringing teenager whining about how scary the earthquakes are or something. There's a real story, a real theory, real (and major) disasters happening and the entire world hangs in the balance!
10 people found this helpful

thesilverscreamReviewed in the United States on February 17, 2019
5.0 out of 5 stars
We’ve run into a spot of bother
Verified purchase
What do Stonehenge, Maine, Aztec Pyramids, Egyptian Pyramids and the Antikythera Mechanism have in common? Stay tuned.

Stonehenge starts moving due to electromagnetic forces. Meanwhile there are earthquakes, volcanoes, floods. The earth is being torn apart and it is up to a discredited scientist to save it. Meanwhile a group of fanatics are trying to hasten the day of destruction so the earth can be reborn. At the same time the military is ready to nuke Stonehenge to try to stop the chaos. (Why is it whenever anything goes wrong the military people want to nuke it?)

Usually it’s a monster that takes out a helicopter. This time it’s Stonehenge’s fault. This is a low budget SYFY channel movie. The CGI is a mix of good and bad. I don’t care. The whole premise of Stonehenge being a machine made by an ancient race to terra form the earth is fabulous. I loved it.

This is what Science Fiction is all about. It’s not supposed to be historically accurate. If you imagine this story taking place on a Star Trek episode and the crew is visiting a planet similar to earth what would your reaction be to it?
4 people found this helpful

ellisonReviewed in the United States on January 27, 2019
4.0 out of 5 stars
COUNTDOWN
Verified purchase
When Stonehenge starts moving around like Rubiks Cube and tourists DIE Indiana Jones and Jim Jones battle for an ancient artifact that is thought to be a key to the ignition switch. I had no idea where this was going so it is an entertaining ride. The main characters have names from the Bible and Salvation is mentioned. Supposed partially taking place in England the vehicles 'there' are not right-hand drive, though because they are military vehicles maybe they would not. People get shot.

Includes Behind the scenes.
One person found this helpful

Of Ghosts and WizardsReviewed in the United States on March 10, 2015
4.0 out of 5 stars
Among the best in Bad Sci-Fi
Verified purchase
This movie is a bad movie. It is. The effects are laughable, the dialogue is stilted. It's just not a good movie. Which is why I, personally, like it. It's pseudo-science, paranoia and trope atop trope. Everything from the military's "BOMB IT!" attitude to the scientists' scorn of "alternative theories" is cheesy and overused in B-rated sci-fi. There's nothing particularly new here.

Now that I have that out of the way, I will fully admit that I like the movie. I don't love it, and it isn't a favorite, but I like it. The acting isn't horrible (though the writing could have used some work), and the plot is at least moderately fresh. There's nothing particularly new about the characters and, in fact, I could only remember the names of two of them by the end. The rest just didn't stand out. The protagonist (Misha Collins) and the antagonist (Hill Harper) were developed enough that the story could carry on with just the two of them. Collins was pretty good, though (I hate to say this because I adore him) a little flat. Harper was, I hope, supposed to be rather flat.

Here's the secret though. It's supposed to be a bad movie. It's a Syfy movie, and all Syfy movies are bad. Some are so bad that they're good. This one is, as my title says, among the best of the bad sci-fi. It's worth watching.
4 people found this helpful

Robert A. BowersReviewed in the United States on December 31, 2012
2.0 out of 5 stars
disappointing
Verified purchase
I thought this one would be a lot of fun, but I was kind of disappointed. It has a good cast, better than average for low budget disaster movies, and the models for Stonehenge used are amazing. I loved those. What was disappointing was the slightly strange plot which didn't explain enough for my wishes but it involves aliens doing construction similar to "Chariot of the Gods" for those who remember that book and it's ideas.They apparently built most of the famous temples and pyramids we know today. Why those aliens would want to booby trap all of them for destruction of the earth later is vague. The special effects for the movie's other disaster sites are disappointing. Frankly, most of the good effects are shown almost in their entirety in the trailer, leaving not much for the movie except for long talk intervals in scientific rooms and empty fields and watching teams of scientists stare at computer screens in wonder as graphs and charts flash by. The movie has more than its share of silly moments; ie,when the heros racing the clock for destruction DRIVE from New York to Maine rather than fly, etc.. Also the ancient temple site found in Maine that pops out of the ground complete with statues etc. that never would have survived the movement, and looking like a Mayan/Incan temple. As far as I know, none of the Upper North American tribes used any such designs. I bought this disc very reasonably priced and it did keep my attention for it's running time, but, unless you have a real fondness for Stonehenge, I would suggest you just wait and watch this one on the SYFY channel.
One person found this helpful

EinsatzReviewed in the United States on July 7, 2013
5.0 out of 5 stars
"That does sound like a picture hung crooked."
Verified purchase
An enjoyable "what-if" Sci-fi flick that plays fast and loose with science, history, and mysticism.

An undiscovered pyramid pops up in Waterside, Maine and leads to a race against time. Can humanity be saved!? Does the fate of the planet dangle from the hands of a crazy conspiracy theorist (Misha Collins)? Will a pickle-puss doctor of stupidology (there can be only one.........Peter Wingfield) get out of everyone's way and allow the plot to move forward!? Gasp! What about the military and their need to nuke everything that crawls and them that don't! Don't forget the backstabbing former friend (Hill Harper as the loony tunes chockfull of nuts archaeologist and his secret room with a doom) and his undercover mole who's an expert shot and willing to shoot anything that moves and them that don't!
I found this movie hilarious and vastly entertaining because of that. If you're inclined to take any of it seriously, you're watching the wrong movie. It's just another `end of the world' non-epic starring actors willing to put their reputations on the line just to provide us with a wee bit of distraction. It's not art. It's commerce. I got exactly what I paid for.
4 people found this helpful

Muggle HermioneReviewed in the United States on January 14, 2013
5.0 out of 5 stars
I'm glad I bought it, it's an instructional video more than anything else.
Verified purchase
It's a film so bad that it's good. I'm glad I bought it and not just because of Misha(ALL HAIL THE OVERLORD). The Idea itself, no matter what u think of the occasional corny lines, is new and clever. They had a MUCH smaller budget than the big time movies and they made due. The special effects were OK, but I just LOVED the fact that they got to physically MAKE 60% of Stonehenge. The behind the scenes footage I always enjoy, seeing how they shot things so cleverly to not have everything special effects. The process of it's making looks like it was so much fun.

This film gave me a well needed break from my Sherlock feels (no one jumps off a building YAY!) and many other Fandom anxieties. :D

If you want to see Misha in action stopping a second Apocalypse (because once is never enough) then this is for you.

If you prefer watching nothing but things having Titanic sized emotional trauma, the special effects of Optimus Prime, or the poetic work of Shakespeare sonnets... just keep scrolling and leave this film to more worthy owners. You peasants.
26 people found this helpful
See all reviews
Back to top
Get to Know Us
Make Money with Us
Amazon Payment Products
Let Us Help You
EnglishChoose a language for shopping. United StatesChoose a country/region for shopping.
© 1996-2022, Amazon.com, Inc. or its affiliates