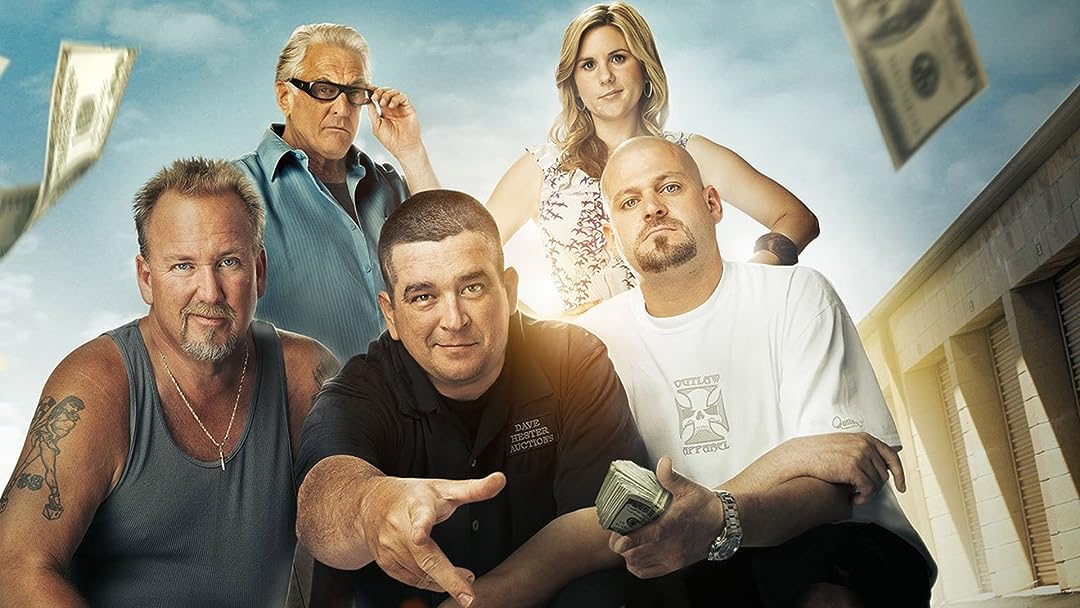 Seasons can't be reviewed separately so I have edited my review. My original review of Season 1 follows this.

It just gets worse. In my review of season 1, I noted items found on the show were interesting but I felt it was staged. By season 8, it's degenerated into a show of personality clashes. There is nothing professional about any of the players in this drama farce. The pro locker buyers are the ones you only get glimpses of. They're the ones who drop out of the bidding because they don't have Hollywood money to waste patching holes in their egos. Our buyers don't rely on experience and proven practice. They devise inane strategies every show.
The show continues to promote the idea there is no way to lose money buying/selling lockers. Actors rarely get a locker on which they don't turn a profit. Almost always, there's an unrelated item "hidden", worth more than the cost of the locker. Values are in virtual dollars and subjective to the seller. They declare a profit when the items are unsold and most likely sitting on shelves for weeks.
2 of the players need to be dropped from the show; the Mogul and the Noob. 8 seasons of Dave Hester's childish shenanigans is more than enough. Mary Paiden [sp?] must be the producer's relative. I thought she was going to bring something fresh to the show, but, no, just a personality mix of backwoods "Valley Girl" and Francis the Talking Mule. Every time she laughs, I expected the mule from Hee Haw to appear on the screen.
We're expected to believe, "Little Mary" packed up her garage sale refurb and dumpster diving experience and moved to southern Cal to compete in buying storage lockers. [Every girl's dream, right?] She exhibits no skill in buying lockers. Her re-purposing skills are marginal. She lacks the facilities to operate the business. She isn't focused, at all. The cost of living in So Cal must be 5x what it was in Texas. Where's the money coming from? Why didn't she try buying lockers in Texas? There have been other single female buyers, on the show, who were far more professional, but, unfortunately must have lacked "pluckiness". Who wants to see a sensible woman succeeding when we can watch a stumblebum from Texas slobber all over herself every time a "cute guy" comes along.
Dave Hester is supposedly some kind of "master" when it comes to buying lockers. Yet, all we see are petty attempts to hide "Little Man" Syndrome. There's no way he rode to the top throwing money around to disguise his personality weaknesses.
It isn't a show following pro buyers. It's a staged production designed to endear the viewer to the players and pervert the "reality" of locker buying. Thanks to in-bred shows like this, vidiots all across the country believe every locker is like Cracker Jack, having a prize in the bottom of the box.
As before, there's interesting items to see, and that barely gets it to 2 Stars.

Scripted show where characters bid for "abandoned" lockers. Cast members were specifically selected to present an array of conflicting personalities. There's the struggling young couple, the kooky collector, the seasoned veteran and a rich bully. It's a reality show crafted around the business of buying storage locker contents. It ain't real. It's television.
The "studio audience" follows bidders from locker to locker; occasionally throwing an odd bid into the mix, for effect.
It's always the same auctioneer and the same 4 bidders competing for the "kill". By some unusual coincidence, there almost always is a prize in every locker; even the most deplorable. It's usually something unique. I find these things most interesting in the show; even if I believe they are planted.

It's a lot like watching, "Let's Make A Deal". Contestants play "What's behind door #1?" or "What's in the box?". The real difference comes when the contestants have to root around in a dumpster to see if they've been zonked or not.

Overall, it's well crafted to fly completely under the radar of the average viewer. It appeals to the kid in all of us, who dreams of buried treasure. I like to watch it. I just don't believe it.

BUT, Keep in mind that this started 10 years ago on a whim by a producer who knows Barry Weiss.
There's been Canada and Texas and New York. There are "spinoffs" too. Container Wars, etc.
It's a successful franchise, and that only happens if they find the right blend.

Barry MADE this show if you ask me, his intelligence, class and humor were all necessary for balance.
But he didn't NEED the show. The Dotsons are millionaires because of the show, and if Dave Hester was able
to somehow have a decent thought enter his head, you could justify some of the big money he's made, but he's just as lucky or unlucky as everyone else. Plus, he's actually a bad person.

The intricacies of buying are fascinating to watch in my opinion. Is it really only about who has the biggest wad in their pants, or is it about a good eye and knowing when to not make it personal? IS that a Hammond B3 or are you just a dummy who likes to hear himself talk and attempt to pump up your own ego?

Yes, each episode APPEARS to be the same as the next. If you truly feel that way, then you won't enjoy it.
The Sopranos episodes are all the same though, aren't they? : )
It's one of those where you really need to encompass everything about it to get any enjoyment. It's not all CGI
and costumed kids doing the impossible up on that screen, just for everyone's information!
And it's on the borderline of "real", that's for sure! But it's fun, and YOU didn't personally overspend on THAT locker, lol!!
(You also don't have to clean up the rat $hit, dead rodents, rotting food, and disgustingly stained mattresses, and other things that they don't put the camera back on,
all while wearing a respirator and protective clothing, but SOMEBODY does!)

You have to take it for what it is, or definitely don't watch it, it's wasting your time and there's other stuff out there.
YES, the lockers are set up, how can you have a Jaguar parked in a locker that is covered with dust, yet they open the door and you clearly see someone's handwriting in the dust on the car...........or taped over box labels, yes, they go into them before they start bidding, yes they have planted things in the lockers, all those things are true. The editing is stark, and some of the "8 second attention span" shots get a little out of hand, but again, It's a TV show that is written, and filmed in loose documentary style. Don't forget; On this "Reality" TV show, they are getting paid tens of thousands of dollars PER EPISODE, AND they keep their storage profits.

It's not for everyone, but it can become quite addictive for many. Here I am, 10 years later, long past cutting the cable, and I can watch these again and again.

If you want to narrow it down into a Reality nutshell: They go into these clean storage containers, and throw everything out into the parking lot and walk away with the one item that may have some value. Shall we just try and imagine the real work that has to go on. No Storage Facility is going to let you throw all that stuff around like that and just walk away.
What about all the trash, and generally it's mostly trash bin trash. The facility won't let you leave it there, and you will have more than a trashcan full for Monday's pickup, I'll betcha!
How many lockers do you break even on before you stop? I love hearing them talk about that: "Well, we need to break even", or, "we're not even gonna break even." That's just pure desperation, because if you're going to break even, then who's paying you for all this "work"? The Reality Show. It would be like spending $100 to get to work, and you make $100 at work that day. Then you still have to get home. And eat. On what? Breaking even shows how faulty the bidding was, and how it may have become personal, instead of business. It also shows that for these wealthy people, it doesn't matter.

it's not for everyone, but there's empty entertainment here for sure. A little binge watch never hurt anybody!

I'd imagine that not unlike the grocery store business used to be (ask Barry, he made his fortune in produce.), you have to charge 200% on top of your cost, or else you can't stock the shelves. A month of bad lockers for these people can effectively end the Jarrod and Brandis of the world. Don't we want to see Brandi come back?
3 people found this helpful

Robert JollyReviewed in the United States on October 25, 2018
4.0 out of 5 stars
Not great, but not too bad.
While not as much fun as "Parks and Recreation" nor as exciting as "Billy the exterminator", it's not too bad, but gets repetitive and overworks these same old gags. We are giving four stars not because it's so great, but everything else that Amazon offers in this genre isn't very good.

T HoffmannReviewed in the United States on November 21, 2018
3.0 out of 5 stars
Seen one storage auction, seen em all
The auctions are repetitious and add nothing to the show. They could skip them and lose nothing. The storage "discoveries" are the best part of the show. I like the expert appraisals, which ultimately determine the big profit items.

Dave and Darryl are obnoxious.

mom4Reviewed in the United States on October 21, 2018
5.0 out of 5 stars
Great, but get rid of Dave!!!!
I love this show. ABSOLUTELY HATE DAVE HESTER!!!!! He is such an a**. Don't care for Darrell either. They should get rid of both guys, the show would be fantastic then!!
2 people found this helpful

Help ExpertReviewed in the United States on January 7, 2019
5.0 out of 5 stars
Reality TV is not a documentary
This is entertaining and Dave Hester suing the show for planted items is just interesting back story. Of course it is setup like all reality TV, so don't think it is as easy as the show makes it look. Just be entertained.
One person found this helpful

BibliotechReviewed in the United States on November 28, 2018
3.0 out of 5 stars
First Three Seasons Is Plenty
I once enjoyed this, but bad production--stupid jokes, shameless irritating in-show advertising, and allegedly planted items--has spoiled it. Get your fill on the early seasons.
One person found this helpful

Kindle CustomerReviewed in the United States on November 13, 2018
1.0 out of 5 stars
Literally the worst show on T.V.
Oh its just so ridiculous, oh look they found a dollar store teddy bear in a storage unit, totally worth a million dollars. Its just so silly and the characters, pathetic.
One person found this helpful
See all reviews
Back to top
Get to Know Us
Make Money with Us
Amazon Payment Products
Let Us Help You
EnglishChoose a language for shopping. United StatesChoose a country/region for shopping.
© 1996-2022, Amazon.com, Inc. or its affiliates