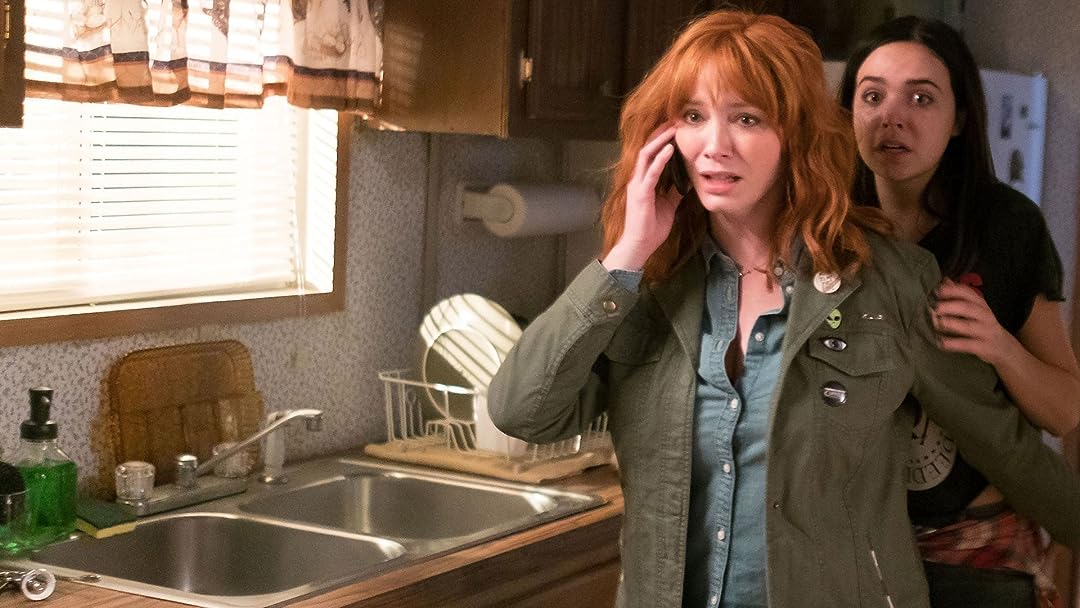 The Strangers: Prey at Night

(2,868)
5.21 h 25 min2018X-RayR
A family's road trip takes a dangerous turn when three uninvited guests pay them a visit and test their every limit in The Strangers: Prey at Night.

Christopher JonesReviewed in the United States on June 22, 2018
1.0 out of 5 stars
Absolutely stupid
Verified purchase
This is one of the worst horror movies I’ve probably ever seen. Everything that you hate about stupid horror movies is in this. Cars mysteriously not starting, girls falling every 10’ when running, killers walking but catching up when victims are running. Why can’t people make better horror movies?
93 people found this helpful

SLMWarrior23Reviewed in the United States on October 14, 2018
4.0 out of 5 stars
Yall need to chill. Great Horror movie. Not All Star Horror
Verified purchase
Honestly if you think about it the first one had to be slower because there was only 2 people. It's faster paced because theres more people. The only things I didn't like *SPOILER*

about this movie was that the mom should've lived longer. Like half way at least just to give her character a little more ummphh. And the constant crying and freaking out. But that's from an adults perspective. This movie I would give 3.8 stars but thats not an option so 4 :)
All of you who are knocking down this film need to chill seriously. I thought this movie was refreshing. I've seen 1 star and 2 star films this is not it. And you over there talking about all the tropes. Yeah you. The girl is falling down because her leg was stabbed. I'd be falling down too if my leg was stabbed. If you took the perspective as a teenager you would notice how much they are not super tough. And as humans if we freak out we're not always gonna be on the ball. Some scenes I'm like hey. But then you have to think about it from a teenage girls perspective and boy. But overall I think it was well done. I like how they killed the suckers off. Yeah! That was well done. Like stab her and then he did lol. Or shoot her he didnt but she did. I was at this movie. Was I scared no. But nothing scares me except real life lol. Was it fun yes. If you want fun and thrilling and screaming at the screen and cheering on the characters and some gaspings then this is the movie. I cant say the first is better because the way each of them are done are done differently. Honestly when I first watched the first one I hated it and I thought it was boring. Watched it later on and enjoyed it. Besides the same type of characters like the masked faces. I do believe they are different. The first is like a beginning and this one is like the end.

BrendanReviewed in the United States on June 18, 2018
1.0 out of 5 stars
We waited all these years....for this? Ugh
Verified purchase
The first Strangers has to be one of the best movies I’ve ever seen. The suspense, the taunting, the brutal end, all of those elements made for a movie that was memorable all these years later.

This new one, contains none of that. The 3 “Strangers” are sad hollow versions of themselves. They no longer do this for fun, or want to terrify someone until they finally seal the death blow....no, they are now nothing but slashers. You could have literally swapped them with Jason or Michael and you wouldn’t have been able to tell the difference. The movie was shallow and overall ruined great characters.

Glad I rented it because I’ll never watch it again.

WC138Reviewed in the United States on October 17, 2018
1.0 out of 5 stars
Trite, Boring, and Insulting to your intelligence.
Verified purchase
If you're reading reviews attempting to decide whether or not you're going to watch this, there are a few things you need to know:
1. The director was on record saying he "hates slasher films, hates home intruder films," and it really shows in his work.
2. Every bad horror movie trope you've ever hated is in this film, by the numbers.
3. The characters have only the flight reaction to fight or flight, despite often being unable to flee, or being in an advantageous position to fight. Particularly when they have a loaded gun. See point 2.
4. All the subtlety and mystery of the first film is gone in lieu of paint-by-the-numbers stalker slasher crap.
5. There isn't a single character worth caring about, since they're all two dimensional.

There are so many other points I could delve into, but I'll save you the time: this sucks, and it sucks hard. Anyone who tells you different probably wants you to buy their copy.
26 people found this helpful

Julian KennedyReviewed in the United States on October 14, 2018
2.0 out of 5 stars
This is a mediocre slasher movie.
Verified purchase
The Strangers: Prey at Night: 4 out of 10: A nuclear family stop by a trailer park to visit their aunt and uncle on the way to take their teenage daughter to a boarding school. At the trailer park, they are menaced by The Strangers, a trio of silent masked killers.

The Good: The last fifteen minutes or so it almost seems the film changed directors and screenwriters as an almost artistic gonzo experience appears on the screen.

If you like eighties soundtracks this movie has a pretty good one. I do admit that in the eighties horror movies used to use fifties soundtracks in the same way so I guess this is both fair and a conspiracy to make me feel very old.

The Bad: Whom am I supposed to be rooting for here? The main family is at best, bland and cliched; The killers are silent, boring and honestly stupid. I have no dog in this fight.

One of the main issues are two of the three killers, Pin-Up Girl and Dollface, are skinny teenage girls. The movie runs into the Chucky problem where one wonders why someone just doesn’t dropkick them into the next county. One on one they simply are not much of a threat. Christina Hendricks as the mother, in particular, looks like she could snap them in two like a twig.

I admittedly did not see the first Strangers movie so I did not come into this with a predisposed fear of smiley faces and emaciated teenage girls wearing porcelain doll masks. Admittedly, to me, the masks are less scary than an indication that the killer has zero peripheral vision.

The Ugly: This was a theatrical release? It’s seven actors in a trailer park. There is no nudity, very little violence, the kills are not creative at all and the killers look like trick or treaters. Good Lord, I would have hated to be the theater manager that weekend.

In Conclusion: Somehow a Lionsgate style direct to video sequel got a wide release in theaters. The acting is decent and the last bit threatens to be entertaining but this is a mediocre slasher movie. Nothing terribly memorable happens for most of the movie. I mean you have a budget and actors and are filming a movie. Would it kill you to jazz it up a bit?
17 people found this helpful

Lisa EbyReviewed in the United States on June 11, 2018
3.0 out of 5 stars
Disappointing
Verified purchase
Acting was not good, disappointed compared to the original. One purchase I chanced and regret! Don't waste your money, wait until you can see it for free.
14 people found this helpful

Alexa B GibsonReviewed in the United States on February 23, 2019
1.0 out of 5 stars
don't waste your time
Verified purchase
Spoilers!
The characters aren't very likeable, especially the annoying emo girl who apparently ditched school and stuff and cries because she's being punnished for it. The killers are stereotyped and boring; they do the whole "oh look, there's blood on my stabby thing, that's cool" thing and the "why not kill your family? I'm a psycho lol" bit. The family makes stupid mistakes (when in modern society would a group of four people not have at least one phone with them) and doesn't fight back when they should have (i.e. when the boy doesn't use the loaded gun to shoot the girl that just killed his mom and stabbed his sister). The only cop to show up of course dies because movie-police have no training or sense of self preservation. His vehicle also refuses to start for no reason but the truck whose engine should be damaged, especially after blowing up, magically works fine. Also what's up with the ending, because I know "evil people" often "come back from the dead" (like the man who supposedly died on the bridge but attacked the daughter two minutes later) but surely they're all dead this time and absolutely did not sneak into a well-lit hospital with cameras and police to finish off two stupid teenagers.
10 people found this helpful

electroaddictReviewed in the United States on October 14, 2018
1.0 out of 5 stars
Complete trash. AVOID!
Verified purchase
Visually, this movie's too dark. It's difficult to see what's happening half the time. All the characters make incredibly stupid decisions, so it's impossible to feel sorry for them. The writers seem to have put more effort into choosing the soundtrack playlist than actually crafting a solid story. Perhaps the bag-head slasher (who keeps turning on the music) gets his slasher superpowers from rockin' 80's tunes. Who knows. The kills are boring, and when you can actually SEE the blood & gore it's unimpressive. AVOID!
11 people found this helpful
See all reviews
Back to top
Get to Know Us
Make Money with Us
Amazon Payment Products
Let Us Help You
EnglishChoose a language for shopping. United StatesChoose a country/region for shopping.
© 1996-2021, Amazon.com, Inc. or its affiliates