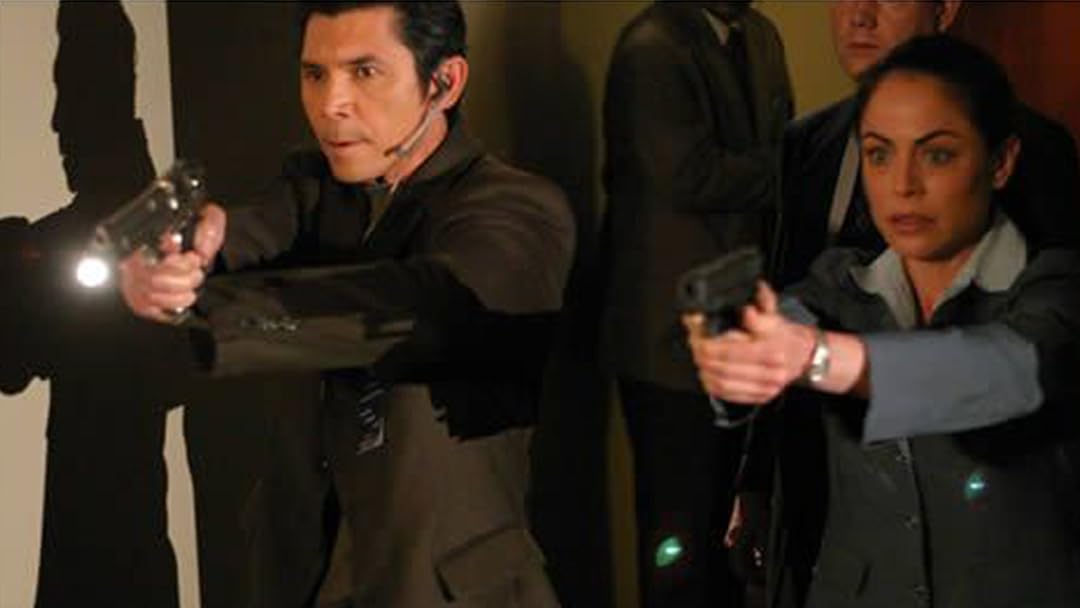 (28)
1 h 35 min2006R
Ted Billings (Glenn Morshower) is a corrupt businessman in need of protection. His security chief, Emily (Yancy Butler), recommends her former lover Vash (Lou Diamond Phillips), an experienced mercenary with an arsenal of weapons he's itching to use.

pcsnakeReviewed in the United States on July 24, 2021
3.0 out of 5 stars
Yancy Butler almost ruined this movie
Verified purchase
This movie was almost okay except for Yancy Butler who in every scene acted like she
smelled something bad and kept an expression on her mouth like she had just had dental
work done. It was uniformly bad acting on her part. Diamond and the other actors were
okay and almost made up for her. The plot was typical and common and the principle behind
the object they were coveting to the point of murder was based on such nonsense science that
it was by far the funniest thing in the movie. So a moderate amount of violence, stupid science,
bad acting by an actress, and worn out plot that was remarkably unoriginal leaves this with no
recommendation and still not so bad that it isn't about average for this kind of movie.

DavearinoReviewed in the United States on May 14, 2021
1.0 out of 5 stars
Two words for ya: It sucks!
Verified purchase
An hour in I knew this was an unredeemable flop of a flick. For some strange reason I decided to endure the torture of watching the last half hour to see the ending. Usually you hope that in the end somebody shoots the villain, but it wasn't long before I was hoping somebody would shoot the movie if only to put it out of it's misery. Don't waste your time on this period.
2 people found this helpful

Amazon CustomerReviewed in the United States on October 15, 2021
2.0 out of 5 stars
Oh Dear . . .
Verified purchase
I wanted to like this. I couldn't get past the terrible music score, the bad writing, and the anorexia of a person trying to portray a security officer. Anorexia zaps a person's energy so badly that they can barely walk up a flight of stairs, they sure wouldn't be able to hold a pistol and fight a bad guy.

The music score sounds like it was created by a high school student who put their buddies' bands in the soundtrack.

The science was cringe. Don't even get me started on the lab scene in the mobile unit.

I guess the movie is better than a poke in the eye with a sharp stick, but just barely. I give it one extra star for being able to lure Lou Diamond Phillips in to act in this thing.

s.m.j.Reviewed in the United States on March 3, 2022
1.0 out of 5 stars
a movie of has been's and want'a be's
Verified purchase
yancy butler just looked awful and drawn out, the firearms and explosives did all the acting. The movie was written / directed / produced and edited by daniel millican, how sad to lack any ability in anything. How in the world did he find the financial support to let him do this to the population of the known world. If you or a loved one is mentally weak or suicidal please don't watch this, you might survive. Either way good luck.

hombre243Reviewed in the United States on May 15, 2022
2.0 out of 5 stars
Poor movie from the git.
Verified purchase
But, Yancy Buttler was a mess all through the movie. Baring her teeth like a pissed off grizzly, bulging her eyes like that same griz just caught his nuts in a trap. She should go back to waitressing in one of those CA insult restaurants. I hope I remember her name so I can avoid her

mrunReviewed in the United States on June 14, 2020
1.0 out of 5 stars
I want my 1.5 hours back!
Verified purchase
Don't waste your time. Horrible acting, casting, & writing. Even the music didn't match the mood of the scenes. This is 1.5 star movie at the most!
4 people found this helpful

StargazerReviewed in the United States on February 7, 2021
5.0 out of 5 stars
Another fine example of Lou's acting prowess
Verified purchase
I had to buy Lou's filmography to replace what was stolen. What a pleasure it's been to binge watch what he's been in. This one is one of my favorites. Lou's acting abilities shines thru in everything he's in. What a talented gifted actor

PopeyeReviewed in the United States on February 27, 2021
1.0 out of 5 stars
Waste of time, poor acting, cliche plot, corney dialog.
Verified purchase
Philips must have been behind on his mortgage to even consider this stupid roll.
One person found this helpful
See all reviews
Back to top
Get to Know Us
Make Money with Us
Amazon Payment Products
Let Us Help You
EnglishChoose a language for shopping. United StatesChoose a country/region for shopping.
© 1996-2022, Amazon.com, Inc. or its affiliates