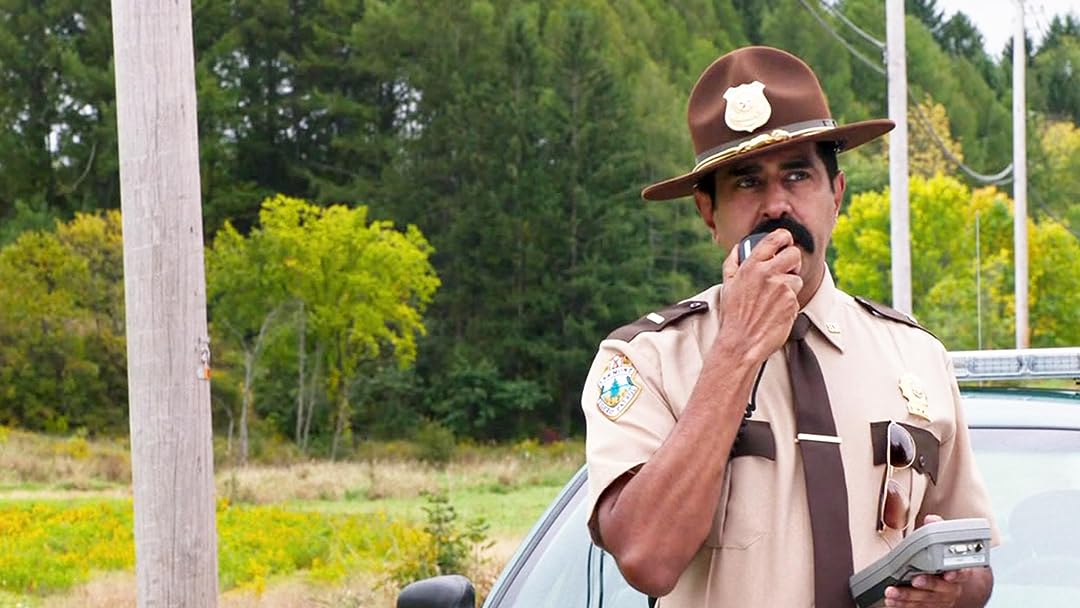 (10,415)6.12018X-RayR
HD. Broken Lizard's loopy lawmen are back to deal with smugglers, Canadian Mounties and a massive grizzly bear.

noclipsReviewed in the United States on July 4, 2018
5.0 out of 5 stars
Everything you would expect from a Super Troopers sequel... and then some
Verified purchase
I loved every bit of it. Like the original, you either get it or you don't. I must disclose that I was an Indiegogo backer so I am obviously a huge fan of the original. I had no idea what they were going to cook up but after experiencing Super Troopers, Club Dread, and Beerfest during my developing college years, I grew to love everything these guys came up with. I fully understand the people that don't get their movies. You really need to throw out your inhibitions, drink a beer or something else, and just enjoy the fun for what it is and don't try to take it seriously. It's like that night out at the bar when you had the time of your life with all of your friends. Remember that? Me either, let's go back for another round.

Broken Lizard, if you happen to see this: Keep it up guys, don't listen to the critics! They will never understand but we all know that. You are doing right by your fans and this is one of the few times, more likely the only time, that I have ever blindly thrown money at something and came out feeling on top. I wish that I knew it was going to be this good so I could have donated more!

MommyAlpacaReviewed in the United States on July 22, 2018
5.0 out of 5 stars
Great addition to the first!
Verified purchase
I was hesitant to watch this. The first was a gold mine of funny jokes and sayings and I didn't want this to fall short. It doesn't. We laughed through the entire thing. While I wasn't a fan of the opening..once you realize what it really is..its funny. The boys did it again and it had funny references to the first movie..which was appreciated. GREAT JOB BROKEN LIZARD!!
18 people found this helpful

StraycatReviewed in the United States on October 9, 2018
5.0 out of 5 stars
you need to watch this right Meow
Verified purchase
if you liked the first SuperTroopers movie, this one is better in every way, shape, and form.
we follow our lovable bunch of screwups from civilian life (they were fired again because of the "fred Savage Incident" and we find out more about that after the credits, so stick around for those!) BACK into uniform as a small canadian town is discovered to actually be on US soil!

Several big name's come back for cameo appearances, and the bad guy? well, watch and find out!
and the LEAST likeable character from the first movie (Farva) turns out to Actually have a personality! And he finds love when he finally gets to order his Liter Cola!

John W. AllenReviewed in the United States on August 28, 2018
5.0 out of 5 stars
They're Back, Baby!
Verified purchase
I had a blast watching this film. Seeing the old crew back and doing their thing? I'd have bought this film sight unseen, but I got the chance to rent it, loved it, and bought the Multi-format release. Is it as good as their first outing? Well, that depends on how you feel about sequels, and what you thought of the first film. It's also a matter of taste, because I loved it, but there are others who may not have enjoyed it quite so much.

One of the risks of making a sequel to a cult classic that was released 15-20 years ago (I'm looking at you Dumb and Dumber Too), is that you lose some of the fire of the original. The actors are almost two decades older, the frame of reference isn't quite as secure as it once was (what was funny in 1994 and 2002 may not be funny 20 years later), and it can seem desperate. I'm sure there are people who feel this happened here, and while I won't say they're wrong (some moments in the film seem a bit strained because of that), I still thoroughly enjoyed the movie.

The jokes, the pratfalls, the gags, the absurdly gross moments, it all works for me, and I loved it. To me, it was like the guys never really left, and I figure if you *did* enjoy the first film, please give this one a chance. I think you'll find it deserves at least that much.

Meow you have a nice day.
5 people found this helpful

Public name (required)Reviewed in the United States on May 30, 2019
5.0 out of 5 stars
As good or better than the first
Verified purchase
As good or better than the first, which is rare. Bonus features are really funny too. Same people as the first, even the female cop who came was helping them out. I thought that was really nice to see because you rarely see that. This was definitely made for the fans. I wish these guys would make more movies. Seems like they have trouble getting funding. If only there was some multinational mega company with the richest person in the world as CEO that offered video services and was kinda known for funding these kinds of projects. Welp
4 people found this helpful

Ryan J. BrownReviewed in the United States on September 24, 2020
1.0 out of 5 stars
It's worth a rental if you want to see the characters but don't want to laugh.
Verified purchase
Remember how funny Super Troopers was? Remember how funny Beerfest was? Yea, this ain't it. I liked how I got to see the old characters. That was cool. However, the movie wasn't a laugh a minute riot like the first one. I chuckled a couple of times. I laughed my keister off at the original. These guys were just looking for easy cash when they made the movie.

The movie comes across as more of a day in the life of these guys rather than a comedy. It's really disappointing.

There are a ton of 5 star evaluations for this. I think these people are afraid to criticize the movie. Like it's going to attack their childhoods or something. The movie is not good. It's below made for tv quality level.

T.M.Reviewed in the United States on September 4, 2018
5.0 out of 5 stars
Awesome sequel to an awesome movie
Verified purchase
I wish you happiness in your household. Loved both movies. I liked the second one better than the first, and I was a huge fan of the first one. However, everyone else liked the first one better. They did a great job, not using the same jokes, but incorporating the first movie into it. Also, they were at Comic-Con!! Everyone should stop by and see them in future years. We got a signed poster and they were just as fun in person! Love these guys.
5 people found this helpful

The VikingReviewed in the United States on December 31, 2018
1.0 out of 5 stars
VERY disappointing in every way.
Verified purchase
I really really wanted to love this movie since the first one was really good. Unfortunately it is typical of so many "sequels" that should have been left alone. The plot is not just weak; it's non-existent. One cheesy gag after the other - which is not unbearable - but geez, give us SOME substance. The worst thing was the nudity - full-frontal male nudity and not just for a split second; we're talking *in your face*. It just didn't have the chemistry of the first movie. The whole Canadians vs. America thing didn't come off well and it didn't add anything to the movie, not to mention the deadpan acting of the "Mounties". Broken Lizard made the movie themselves, very commendable but they should have hired professionals to write it.
3 people found this helpful
See all reviews
Back to top
Get to Know Us
Make Money with Us
Amazon Payment Products
Let Us Help You
EnglishChoose a language for shopping. United StatesChoose a country/region for shopping.
© 1996-2021, Amazon.com, Inc. or its affiliates