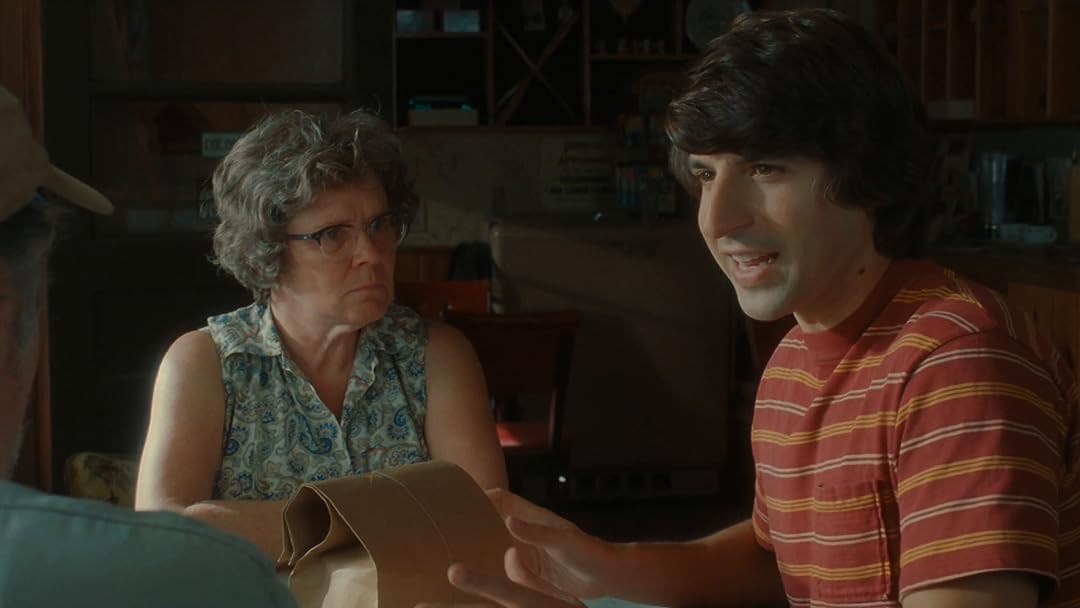 (872)
6.72 h 1 min2009R
From the Oscar-winning director of Brokeback Mountain comes a comedy inspired by a true story of the famed music festival that critics call "irresistibly entertaining" (Bryan Erdy, CBS-TV)!

Crazy SvenReviewed in the United States on September 13, 2018
4.0 out of 5 stars
Making of the First Woodstock
Verified purchase
This adaptation of the true story of the making of Woodstock, also the reason for its name "Taking Woodstock", was really enjoyable in kind of a disconnected way. The director stays true to most of the events and planning that went into the event at Yasgur's Farm in the Catskills area of New York State, but also takes some liberties. They did their homework regarding the local folks' reactions to the event, both negative and mostly positive, but some of it was dramatized to include the cast of characters.

The film covers the scope of the event very well, from what was probably the longest traffic jam in New York history, to the filming of the Port-O-San segment of the original Woodstock movie, to a particularly accurate depiction of an acid trip in a VW bus and even skinny-dippers in a local pond, but there are some departures as well. The guys mother was just a little bit too frenetic and the injection of a gay affair completely at random was strange at best. However; all together, the film was quite enjoyable.

I have a particular gripe about the X-Ray Trivia section in the instant viewing. The Trivia info is fine, but the alleged "Goofs" are supposed to be about continuity "problems" in films. However; most of the Goofs have become so petty and irrelevant that it is embarrassing to read them. For example: "Boy scout socks in 1969 didn't have the orange bands at the top, but were solid grey." This is a MOVIE, am I right? Barring going back in a time machine and filming in the past, how important is something like style of someone's watch or eyeglasses if they were not actually introduced until a month after the film was supposed to have taken place? The obsessive-compulsive viewers seem to want to dissect every molecule of a film instead of just watching it. If that is all these goofs can focus on, they must have a very distracting life.

Amazon CustomerReviewed in the United States on September 23, 2016
5.0 out of 5 stars
True Hippidom
Verified purchase
More than a little odd but a very accurate depiction of that era as I see it. I was a "hippy" in San Francisco at the time... I did not go to Woodstock because I was broke, very pregnant (my son was born the day after it ended) and didn't hear about it until after it was over... but the characters were as totally accurate as I could imagine. I think it helps other generations understand the era.

I KNEW people very much like some of the main characters in that film. For example the guy who was a burnt out PTSD Vietnam vet? At least 2-3 of my former roomates would have met that description and acted a lot like him. The lady with the big leather hat whose boyfriend was one of the producers (the guy who knew Eliot) ... acted just like a women I used to live with, who even had that same hat. The couple from San Francisco Eliot took an acid trip with? Just like people I knew in SF. etc etc etc.

D. LieblerReviewed in the United States on December 8, 2018
5.0 out of 5 stars
Rabbit Trail 1969
Verified purchase
In 1969 there was this concert called Woodstock that held many stories over the weekend that it transpired. This is perhaps the only movie that tells of the local's headaches that took place.

If you have the movie Woodstock I would advise you owning this movie so you can get the feel for the various rabbit trails that transpired.

The ending is a bit of a surprise and I will not give any teaser so you have to get this movie to enjoy the full three days that took place way back when.
6 people found this helpful

will crowReviewed in the United States on November 17, 2019
4.0 out of 5 stars
close as we can get now days
Verified purchase
Plenty to love and adore. There's so much that feels right about the concert and free love aspects of the time and the event.
No reason to add Emil Hirsch as today's idea of a washed out vet. He plays it way too smooth and from this distance in time and understanding he just can't possibly hold a thousand yard stare. Time that could have been spent on more music, more relevant character development was wasted on this flimsy, transparent sock puppet.
nicely done though. the times they were a changin.
2 people found this helpful

JadomoReviewed in the United States on July 25, 2013
5.0 out of 5 stars
Charming and heartfelt...
Verified purchase
This movie is not exactly a true story. Don't get me wrong. A lot of it IS true but there was some artistic licsence taken, also. For instance...Elliot WAS responsible for bringing Woodstock Ventures to his home town but he did NOT introduce Micheal Lang to his neighbor, Max Yasgur. These are trivial concerns. Watch the movie for it's entertainment value and you won't be disappointed. It's a charming and heartfelt comedy, that if you just let your mind go, will bring you right back to that wonderful summer in 1969.
One thing in particular, that I just HAVE to mention, is that there is one scene in the movie that is the most REAL depiction of an acid trip, that I have EVER seen, committed to film! And if you've ever taken really good acid, like what we had back in the 60's, I'm sure you'll agree with me. Nothing "over the top" or unbelieveable hallucinations, that are so often depicted in movies. This is just a great trip! Very natural. Ang Lee nailed it! (The scene takes place when Elliot first gets to the festival site and meets up with a couple of kids who are just sitting by their VW minibus. They drop acid, crawl inside the minibus and...bye bye reality.)
It's not vital but it is a good idea to watch "Woodstock: Three Days Of Peace And Music", before you watch this movie. Then you can appreciate little things, like the "nun throwing the peace sign", "Wavy Gravy walking around" or the "port-a-san man interview", etc.
For those who have never seen this movie, I'd like to add that there is NO re creation of the actual concert in this movie. So don't expect any. This is a story about how the concert came to be - period. Enjoy!
10 people found this helpful

Robert HedstromReviewed in the United States on January 13, 2014
5.0 out of 5 stars
Makes the whole event more real-some
Verified purchase
I'm 67, old hippy, and I concurrently read both books about the events leading up to the festival: Elliot Tyber's Taking Woodstock and Michael Lange's The Road to Woodstock. And I watched both movies: 'Taking Woodstock' and the doc '3 Days of Peace and Music', and I would try to keep the dates of everything constant as skipped from books to movies; There are many events in the movie 'Taking Woodstock' that didn't really occur and Michael Lange's partner in Woodstock is in '3Days of Music and...", in 'Taking Woodstock, Artie Cornfeld appears twice but is not really at all like Artie. It was really fun, however, to follow the trail to Woodstock through all these mediums, and conclude that it was all worth doing, and I love the movie so much, it takes me back to that time; I was on the west coast doing the same thing, turning on, tuning in, grooving on the sounds and camradery with friends. Where have all the flowers gone? Long time passing. I loved the movie Taking Woodstock, but keep in mind it is not about the concert, it's about events leading up to it. People who didn't live back then may not be able to relate to it. I think this movie is about 30 years in coming.
12 people found this helpful

Hobby SeamstressReviewed in the United States on May 13, 2021
4.0 out of 5 stars
Cross-section of eats meets acid
Verified purchase
This film captures that short decadent temporal hiccup at the end of the ‘60s with all its narcissistic asymmetries, dichotomies, and zeitgeist. Deftly weaves between a family’s landscapes of hard fiscal realities, betrayals, and their three day brush with counter-cultural absurdities. For just a brief phosphorescent moment in time their little town became the brilliant focal point and living center of the American experience. This film walks through the looking glass when up rose a growing belief that anything was possible under the aegis of peace, love, and acid escapes.

Dr B.Aaron von Hgen IIIReviewed in the United States on September 17, 2019
5.0 out of 5 stars
From what I know of the events, it's a plausable story.
Verified purchase
More of a gay coming of age movie. But the guy who did get Michael Lang & Max Yasgur together was still in the closet during the summer of '69. He is far out now, in more ways than one. And his parents did run a motel in the Catskill Mountains - the Jewish Alps - about 150 miles north of New York City. Sort of reminds me of another movie about unexpected historical significance. And that movie is CBGB.
One person found this helpful
See all reviews
Back to top
Get to Know Us
Make Money with Us
Amazon Payment Products
Let Us Help You
EnglishChoose a language for shopping. United StatesChoose a country/region for shopping.
© 1996-2022, Amazon.com, Inc. or its affiliates