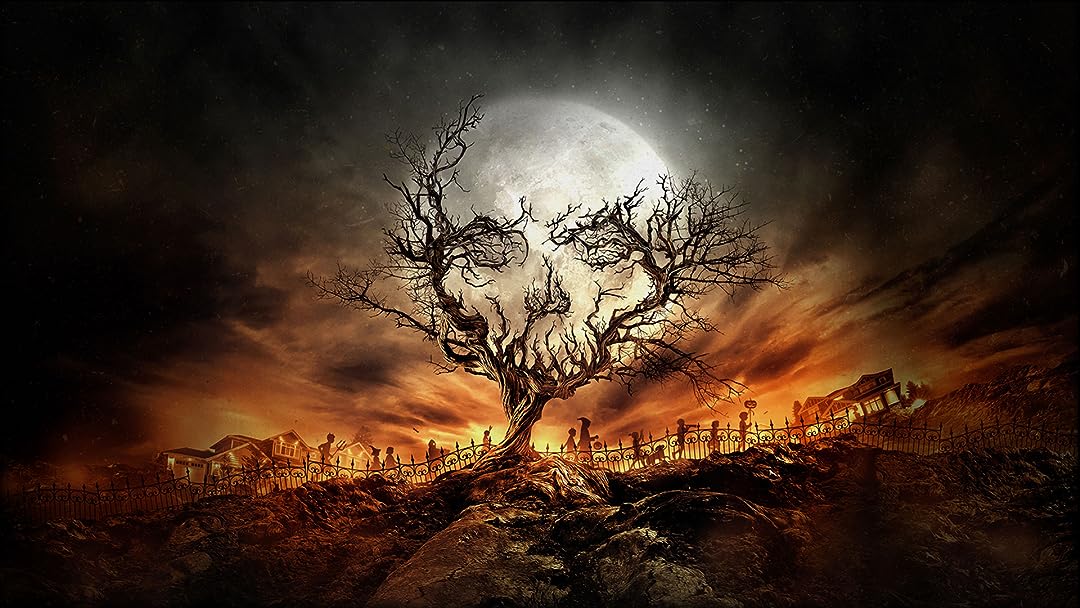 (1,132)
5.51 h 38 min2015X-Ray18+
Named "the best horror anthology since Trick 'r Treat" by Fangoria Magazine and "among the best Halloween-themed horror movies ever made" by DailyDead, this critically acclaimed film weaves together ten chilling tales from horror's top directors. Ghosts, ghouls, monsters, and the devil delight in terrorizing unsuspecting residents of a suburban neighborhood on Halloween night.

iwish4Reviewed in the United States on September 9, 2019
1.0 out of 5 stars
It sucks!
Verified purchase
Just horrible. Nothing thrilling about it at all basically you just see a bunch of guts and blood and not even a hint of a good storyline for any of them. Better recommendations for Halloween would be The Lady in White, The Blair Witch Project, Orphan or even some old Twilight Zone episodes. Don't waste your time on this garbage.
62 people found this helpful

Lamont DunniganReviewed in the United States on September 25, 2019
2.0 out of 5 stars
Don't Insult Trick R' Treat Like that
Verified purchase
I decided to watch this because it's dubbed the BEST anthology since Trick R' Treat (and I love that movie). So gave this a try. And I feel personally insulted. It's not that it's bad (well...), it's just not on the level you think it is when it's compared to one of the best Halloween anthologies. That is setting the bar wayyyyyyyyyyyyyyyyyyyyyyyy too high for this. This would be better compared to something like VHS or ABCs of Death. But putting that aside...
The stories here are actually good concepts. I could see where they were going but they weren't executed very well (i'm exhausted by the obnoxious boyfriend character). And it's surprisingly gory. Which is fine but eventually it became gratuitous.
30 people found this helpful

BudReviewed in the United States on September 28, 2019
4.0 out of 5 stars
It's fun old school, homages to past horror films and tropes.
Verified purchase
This film was a lot of campy fun. Don't have too many high expectations for it to be 'scary.' If you're an old school horror fan; you'll see a lot of cameos and homages' to past horror films for Halloween. Some old school practical SFXs. Night of the living dead and carnival of souls play on the TV, like they did in some other horror films, ha!. They're all there in a way. The fog, Friday the 13th , 50s style Aliens, Creepshow, The Evil Dead.. Even has the police department tropes. It's worth a watch.. Kinda have to be a kid of the 70s, 80s and msybe early 90s to appreciate the inside jokes.
18 people found this helpful

A. HollarReviewed in the United States on September 9, 2019
4.0 out of 5 stars
I liked it
Verified purchase
So it's the beginning of September and I need to start getting in the Halloween spirit, I started with this movie because it was rated well (to be all honest I don't really go by ratings, because some of the best horror movies are probably low rated). I highly enjoyed it, pretty glad it was shorts instead of a full length movie. Had some notable actors that I knew from else where, stories were funny and kept my attention on them. The only thing that got me was a pumpkin making the Gnoll noise from World of warcraft, found that hilarious for some reason. I would highly recommend to anyone who enjoys horror.
14 people found this helpful

jo marchReviewed in the United States on October 20, 2019
1.0 out of 5 stars
Offensive, Gross, and Poorly Written
Verified purchase
This lost me during the first story, where a disgruntled trick-or-treater sees his parents have sex while eating the candy he wasn't allowed to eat. He becomes the monster Sweet Tooth, yadda yadda, bottom line, the combination of little kids trick-or-treating and assorted evil entities and the jerks who people this fictional town, made for a disjointed, uneven, and tiresome film. The worst part was that all of the really bad behavior by the other adults (not the monsters) takes place on screen with small kids there. It was jarring, and creepy to watch people having sex, being dismembered, flirting, and all while a young actor is right there. It's the mark of a cheaply made movie, and I would give this movie a hard pass.
12 people found this helpful

Carmen IrisReviewed in the United States on September 27, 2019
4.0 out of 5 stars
Gruesome
Verified purchase
I never know what people will like. Pretty bad reviews for a horror movie with a not too serious a spin. Plenty of blood and disturbing deaths, in the various segments. So exactly what do people like in horror? Some copycat take on the Blair Witch Project, which half the "horror" movies now are about: a group of idiots with a camera either in their homes capturing haunting or running around in a wood ending up getting chopped up. I guess the less imagination, the least people have to pay attention and the more they like it. At least this one had a segment based on the Chain Saw Massacre. I didn't give it a 5 because one segment had a actor that I can not stand. (Sam Witwer, in case you are wondering. Yeah, I know he is popular, barf.)
12 people found this helpful

April L. HamiltonReviewed in the United States on October 18, 2015
4.0 out of 5 stars
Great Companion To Trick r' Treat, But Different
Verified purchase
This is an anthology of short stories that explore the goings-on in a small town on Halloween night. Some of the stories are scary, some are funny, and some are simply ironic. In that respect, Tales of Halloween sort of follows in the tradition of the original Twilight Zone TV series. The production company did itself a disservice by promoting this as "10 Terrifying Tales" because some of the stories here aren't really scary at all. If you go into it expecting more of a Twilight Zone -type experience, you won't be disappointed.

The first story, "Sweet Tooth", centers on a totally original urban legend, but I can see it becoming a standard tale for sharing at Halloween parties and sleepovers. This was the standout in the collection for me.

The Night Jimmy Raised Hell is one of the more ironic entries. What if Mephistopheles was a cranky, suburban neighbor who's been the victim of one too many Halloween pranks?

In Trick, a group of kids who've clearly seen a few too many prank horror videos acts out.

The Weak and the Wicked pits an orphaned, bullied teen against the hooligans who killed his parents, but he may not be so helpless as the bullies think this time around.

Ding Dong re-imagines the witch from Hansel and Gretel as hiding in the guise of a modern-day woman who's frustrated at being unable to have children of her own. Little does she know that re-enacting her original crimes will be her undoing.

This Means War follows a Halloween decor and sounds battle between neighbors to its bitter end.

In Friday the 31st, a Leatherface -type killer gets his comeuppance from a tiny, alien trick or treater.

In The Bad Seed, a pumpkin that's been genetically-engineered to be extra-large wreaks its revenge for the carnage humans do to its brethren every Halloween.

Homages to famous horror movies, directors and stories are sprinkled liberally throughout.

C.P.JONESReviewed in the United States on October 12, 2019
4.0 out of 5 stars
Entertaining B-grade horror/comedy
Verified purchase
I can see why the blurb compares it to Trick 'R' Treat - this movie is very much in the same spirit. An anthology of ten stories of mischief, mayhem, and murder all taking place in the same town on the same Halloween night, with some minor interconnected bits between the stories; it sounds pretty much exactly like the former except for the number of stories.

First off, a word of warning: do NOT go into this expecting a scary movie. Aside from a few jump scares, some freaky-looking creatures, and one particular segment of the anthology, there's not much here to terrify or creep you out. This is very much a B-grade horror-comedy; expect something more like Sam Raimi's Evil Dead movies or Cabin in the Woods.

There's plenty of gore to be had in this one, so if that's your cup of tea, you'll enjoy it. However, those put off by excessive gore will probably flat-out hate this movie.

As with many anthologies, the quality is kind of a mixed bag in terms of the writing, direction, acting, and plots. For what it's worth, none of these stories struck me as particularly bad. Standout stories included The Night Billy Raised Hell, which, aside from being a wonderful exercise in black comedy, actually pulled off a nasty little twist; Friday the 31st, a hilarious blood-soaked battle between a Jason Voorhees knockoff and a trick-or-treating alien; Bad Seed, the story of a Jack-O-Lantern come to malicious, murderous life; and Grim Grinning Ghost, which is good at using its limited runtime for building tension, and is the only story in this anthology likely to elicit a scare.

References to classic horror are all over this movie - the most obvious one being Adrienne Barbeau's performance in The Fog, but there are also nods to the aforementioned Friday the 13th, Halloween, The Thing, and more, in addition to actual cameos by a couple of horror legends.

Like I said, don't go into this expecting a horror movie. But if you're craving a Trick 'R' Treat-esque anthology about Halloween featuring tons of gore and dark comedy, this will satisfy your sweet tooth!
3 people found this helpful
See all reviews
Back to top
Get to Know Us
Make Money with Us
Amazon Payment Products
Let Us Help You
EnglishChoose a language for shopping. United StatesChoose a country/region for shopping.
© 1996-2022, Amazon.com, Inc. or its affiliates