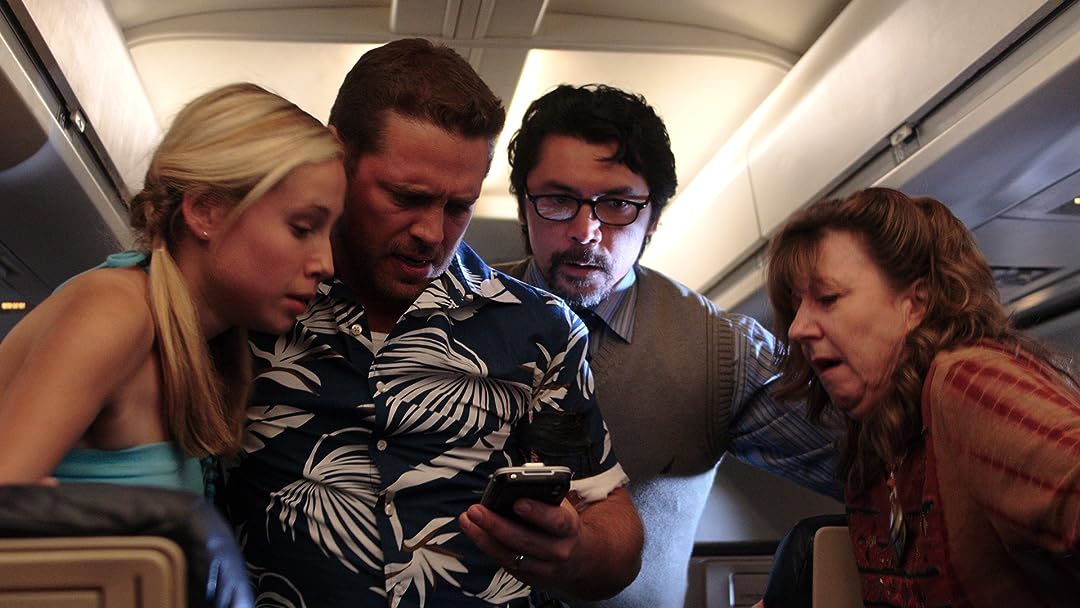 (56)
4.41 h 30 min2008PG-13
Top secret government experiments with time travel have been shut down and declared too dangerous to continue. The lead scientist has disappeared with the technology. As special agents try to locate him, scientists must deal with the repercussions from the time ripples that threaten to destroy the Earth.

pcsnakeReviewed in the United States on September 25, 2019
4.0 out of 5 stars
Pretty good time travel/world disaster/ save the world movie
Verified purchase
Sci Fi is all about suspension of disbelif. So of course there are things that are a little different then
accepted reality. One expecst the story to set the parameters and either just state them or show them.
But, once set they must remain consistent and cannot be changed without ruining the suspension of disbelief.
Well, this movie played by these Sci Fi rules. Time travel has to set parameters far outside our usual accepted reality. If you can't accept that, don't watch
these movies. The acting, direction, photography, special effects, plot, etc were all acceptable. Of course,
there are really great Sci Fi movies that deserve 5 stars and this wasn't one of them. But once you've watched
all of those (at least as Prime videos) then you have to start watching other just okay Sci Fi. This is one of those.

zero my heroReviewed in the United States on April 4, 2020
2.0 out of 5 stars
Looking for a serious B-movie that almost comes across like Sharknado?
Verified purchase
The acting is decent, but the storyline and the science are laughable. (By the way, huge Sci-Fi fan here.)

Yes, it's important to be able to suspend belief. People who can't do this, can't enjoy Sci-Fi. But for these types of movies to work, they still need to be somewhere in the realm of plausibility, even if only on the fringe. This one is all over the place. It's almost like the writers tried to offend our grasp of reality. My favorite line illustrates this point:

Background: A mysterious vortex hovers over the LA area and shoots lightening bolts that disintegrate whatever they hit. One of the characters (a federal agent) reports to his superior that the vortex is growing larger, fast. He says:

"There's something else you should know sir. I've been running simulations on the vortex's trajectory... Right now, it's about a quarter mile long. But as it continues to move across the state, the vortex will just keep growing. In a few hours, it will be the size of California. A few hours after that, the size of Asia. There's no reason to believe that this phenomenon is isolated to this planet. Eventually, its size will merely expand to infinity. The entire universe will cease to exist... Termination point."

See what I mean? This federal agent--who knows what kind of science background or training he has--predicts that this mysterious vortex, a storm in the sky that no one has ever seen before, will end the universe?? And he jumped to this conclusion because it's a quarter mile long, but it's growing?? Really?? This line made me laugh. And there were more.

slaimiReviewed in the United States on February 2, 2021
5.0 out of 5 stars
typical
Verified purchase
It's the usual sci-fi suspense thriller that keeps you coming back for something notable. In this one I was only left with one question. When the good doctor is fixing his handheld device and talking to the gunman about the governments intentions to use his device as a weapon. He asks the gunman if he has kids, and the gunman replies, it's a machine doc. Did they leave out the response or were we to walk away thinking, if the government uses your kid as a killing tool would they be considered a machine?
One person found this helpful

SarahReviewed in the United States on October 6, 2019
2.0 out of 5 stars
Had Potential, But Was Disappointing
Verified purchase
The acting was good, but very poorly written. There are times when I think TV/Movie writers believe their audience are truly idiots. There were numerous opportunities to take out the bad guys and each time hesitation led to a good guy's death, even though the good guys knew it was a do-or-die situation. I guess it's just the writer's way of creating drama, but it seemed very unnatural & unreal for people to react in this manner given the circumstances. As a result, you quickly knew the bad guys would keep going. In the end, the timeline was reset and no one remembered the previous timeline. However, the main character "Calib" seemed to know whom the organization's infiltrators were and had them arrested without any proof. Again, it just was not believable. Ugh...
2 people found this helpful

Nancy B.Reviewed in the United States on August 25, 2019
3.0 out of 5 stars
Made-for-SyFy-Channel-like Movie
Verified purchase
Overall enjoyable movie. This is real movie - not a 1 star made by a group of people with a camcorder movie like many of the free on Amazon Prime films. It has the production value, ok acting, and medium quality special effects of a made for SyFy TV movie from 10 years ago. The fights and shoot-outs are pretty well choreographed and realistic. Mostly fiction, not much actual science but time travel is fantasy anyway.
2 people found this helpful

mkl929Reviewed in the United States on August 26, 2019
1.0 out of 5 stars
Predictable, and tiring
Verified purchase
Another movie where the 15 year old (girl, of course) saves the world. "You will never fit in there." Oh, yes, he would have, bigger people than him had to have gotten in there in the first place (you have to watch the movie--don't--to know what I am talking about). But if he goes in, we don't get the politically correct version, do we? I am tired of these movies, I almost don't watch movies any more because I am tired of it being crammed down my throat. I stopped this one halfway through, it was almost good till the producers ruined it.
2 people found this helpful

SRReviewed in the United States on February 20, 2021
2.0 out of 5 stars
Two stars at most. Don’t fall for three or more stars
Verified purchase
Tired I’ve seen three or more stars for a movie that should only get two stars at most. The story was silly, the acting was silly and the producers and riders can do so much better. Must have five-year-olds watching these movies and give them a higher score or star rating.

AmachaReviewed in the United States on October 14, 2019
3.0 out of 5 stars
Well made, but the science is silly.
Verified purchase
Well made, but the science is silly. I mean I can suspend disbelief as much as anyone, but I do have my limits.
One person found this helpful
See all reviews
Back to top
Get to Know Us
Make Money with Us
Amazon Payment Products
Let Us Help You
EnglishChoose a language for shopping. United StatesChoose a country/region for shopping.
© 1996-2022, Amazon.com, Inc. or its affiliates